Article by Joanna Łaska – Total reading time 4 minutes. Palma de Vecchio Pop-up Square by Studio Fink, Bergamo, Italy How would you describe contemporary art? Controversial? Loud? Cheap? Expensive? Insensitive? No matter what art means to us and how we’d describe it, we always think of museums and art galleries when speaking of it. But what would happen if art could be taken outside to surround us within urban spaces? What if art is now starting to take a huge part in urban design and it is much more easily accessible than we would actually expect? Studio Fink is here once again to prove to us that modern art not only can become a part of urban design but also to show us how easily it can be blended with traditional forms of art. Peter Fink, a founder and designer at Studio Fink, has collaborated with countless cities and architectural institutions before – every time aiming at the same goal – to animate cities and to highlight the role of art and artistic creativity in cityscapes. His colourful designs have brought life and colour to cities all around the world, including Italy’s picturesque city of Bergamo. Art to be Lived In the temporary transformation of the outdoor space of the Modern Art gallery in Bergamo – a city with a long medieval history, where Renaissance art still can be seen in its streets – has become the home of a 100-Day Pop-Up Square full of art splendour and extravaganza to accompany the first large retrospective exhibition of Palma il Vecchio paintings. The creators of the square have opted for a strong contrast between the gallery’s setting and the general atmosphere of the city itself, in order to create a comfortable and memorable external room and a place encouraging social interaction, conversation, and contemplation before and after seeing the exhibition. In the blank and unassuming concrete courtyard in front of the gallery, a colourful, lively, and bright 100-Day Pop-Up Square has been created to give Renaissance art a new meaning and use. Peter Fink himself started to think about the motto of the show, which in the end turned out to be: “An exhibition not only to be seen, but to be lived”. The Art of Conversation Vivid, contrasting colours have been chosen to act as exclamation marks, highlighting the importance of the art being exhibited. The Art itself has taken the form of drapery depictions, taken from Palma il Vecchio’s paintings and fixed to geometrical flower beds. The paintings chosen have been shown as enlarged pieces of certain paintings – mostly the faces – as seen in the favourite subjects of the so-called “Holy Conversations”. 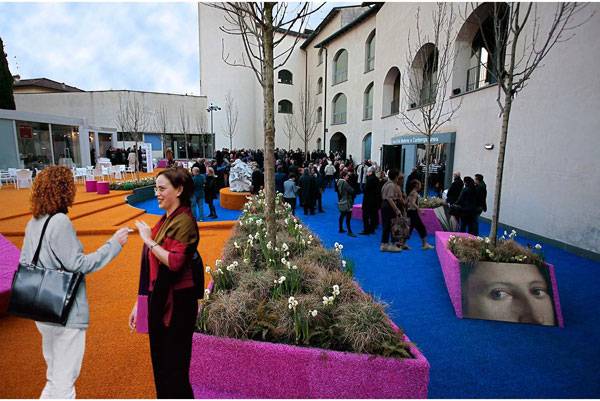 In fact, “Holy Conversations”, depicting their mythological and allegorical subjects as conversations in extraordinary landscapes, have become the hidden theme of the whole square. People visiting the square have had the perfect occasion to encounter art from a never-before-seen point of view. The historical and subtle art has been given a new life and meaning thanks to its fantastic surroundings, giving the visitors an exciting topic to talk about. 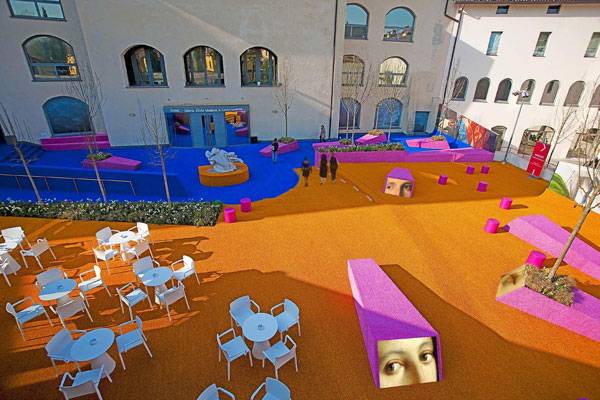 The conversations and human interactions have been made easier by the placement of several tables and chairs in the square. And for this, the colour white was chosen in order to make a harmonic connection with the plantings used in the square. Plants used to decorate and to soften the whole interior were designed and selected by StudioGPT’s Lucia Nusiner who opted for white and yellow spring flowers and grasses. Involvement of Museums all Around the World For one hundred days, this extraordinary place was made possible thanks to the gigantic support of the greatest museums all around the world, including the National Gallery in London, the Thyssen-Bornemisza Museum in Madrid, the Hermitage in St. Petersburg, the Kunsthistorisches Museum in Vienna, the Gemäldegalerie in Dresden, the Philadelphia Museum of Art, the Staatliche Museen in Berlin, and major Italian museums including the Uffizi in Florence, the Galleria Borghese in Rome, and the Gallerie dell’Accademia in Venice. 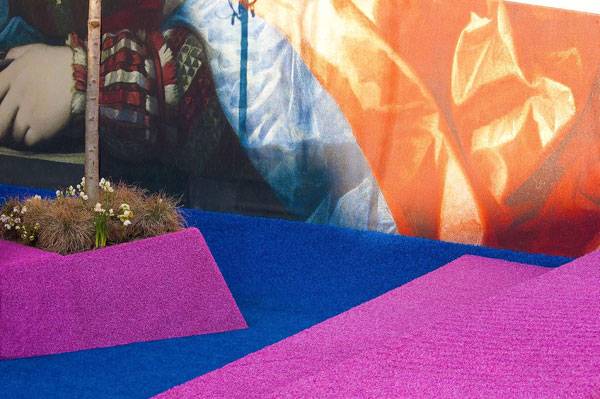 Art Made Easy Peter Fink, who hopes that his design of the pop-up square will encourage people to explore through their own conversations how Palma il Vecchio’s art develops poems of glances, stories, nostalgia, discoveries, and glimpses through the conversational landscapes of his paintings, also hopes that this project will change the way we consider traditional art. His creation at the Galleria d’Arte Moderna e Contemporanea in Bergamo is an excellent example of art being made accessible and comprehensible for its audiences around the world. The 100-Day Pop-Up Square also shows the countless possibilities of modern technology, leaving us no choice but to get creative and imaginative in our projects, creating pieces of true art for all to enjoy. What do you think of the Palma de Vecchio Pop-up Square? Go to comments