Northala Fields, by Peter Fink and Igor Marko, London, UK.  This large park opened in 2008 as part of an ambitious plan for Northolt and Greenford Country Park in West London. The plan called for creating high-quality outdoor spaces along highway A40. There is a word to describe the surroundings before Northala Fields: pollution. That pollution manifested itself in terms of noise, visual impact, and poor air quality. Artist Peter Fink and architect Igor Marko took on the challenge of exploring economical solutions for sustainable design. Here’s how they made a difference and created an enjoyable place along the highway. 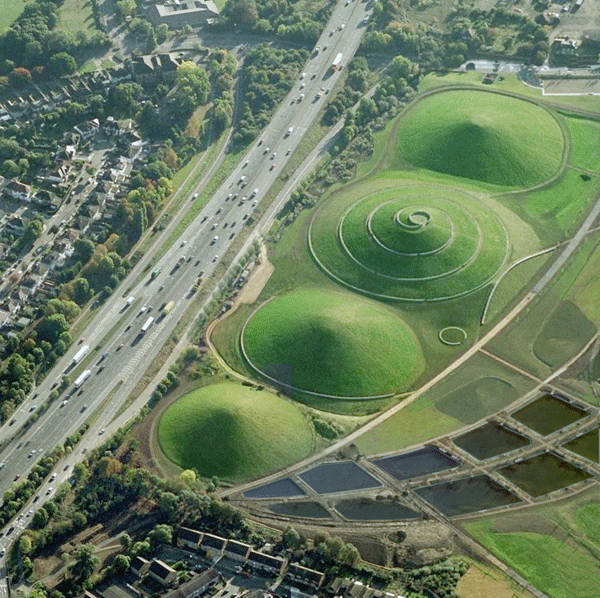 Redesigning the Connections of the Landscape One of the main questions was about how the park would create connections and barriers to its surroundings and why. The park turns its back on the road through four distinctive artificial hills along the highway, which protect the large field behind them and reduce the visual impact and noise of the A40.

While Northala Fields snubs the highway, it is otherwise very focused on creating connections within the park, making every place accessible by foot or bicycle and reinforcing a sense of unity. A well-designed hierarchical network of paths includes the whole Country Park, the different areas inside the park, and the public network. As well, visual connection plays a role on top of the mounds, showing off London from an awesome new perspective.

The Key features of Ecological Urbanism

The 27-acre Northala Fields has achieved something more than just being clean during its construction phase and lifetime: It also achieved the goal of creating extra ecologically beneficial points to the place where it is. What was the strategy to do that? Basically, it came down to providing different habitats for wildlife through a new design for the watercourse, careful planting, and a plan to recycle nearby waste materials. Water is a central feature of the design, creating recreational areas and giving support to wetlands for flora and fauna through its six interconnected lakes where people can fish, and a series of wildflower meadows.

In addition, a woodland habitat was reinforced in the perimeter and a range of grassland covers the artificial hills, creating four different conditions for a variety of wildflowers. The mounds themselves are made of timber, concrete, and bricks originally imported from demolished projects such as The Wembley Stadium. Could there be a better second life for all that material? This decision created economic benefits, too, meaning no cost to taxpayers, which made the project more sustainable in many perspectives. Related articles:

A Topography That Makes People Move The sinuous artificial topography is the subtle language the park uses to invite us to put ourselves into action. This particular geometry, strongly inspired by nature, encourages people to explore the place from the paths around the huge mounds to those in the large field, where the topography is softer. 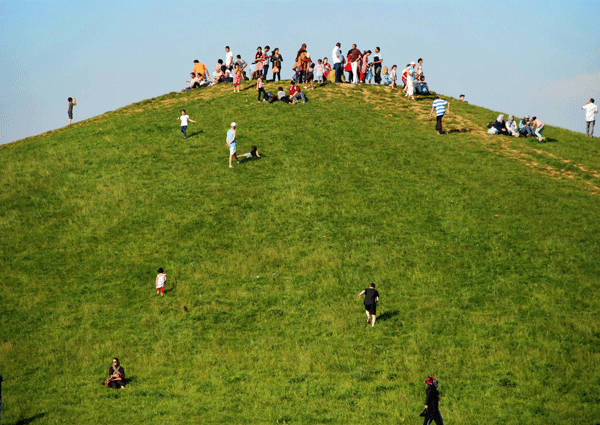 The park reveals the landscape when people walk through it. There are some places for contemplative activities, but the park has been designed to provide dynamic recreation. The design of the topography creates a sensation of continuity through the different areas, including a lake for model boats and a colorful playground. 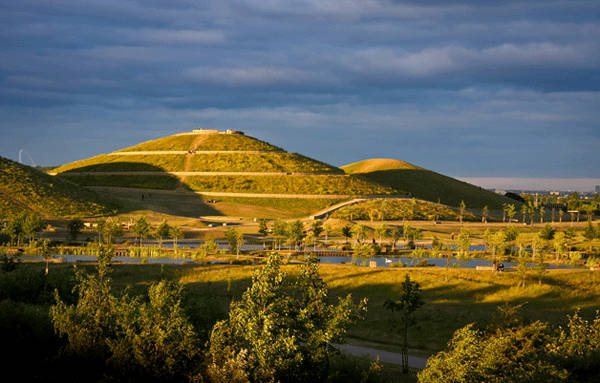 Winner of the Landscape Institute Award in 2008 and Green Flag Award in 2009, Northala Fields is an involved and active member of the quiet revolution of ecological urbanism. Giving voice to the environmentally and economically responsible design won’t change past excesses, but it will enlarge our expectations as we go forward. Recommended Reading: Phytoremediation: Transformation and Control of Contaminants by Steven C. McCutcheon Phytoremediation: Role of Aquatic Plants in Environmental Clean-Up by Bhupinder Dhir Article written by Elisa Garcia Return to Homepage Published in Blog