We take a moment to explore the delights of the exotic Xilitla garden. Inspired by great architects and artists such as Antoni Gaudí, Giovanni Baptista Piranesi, and Maurits Cornelis Escher and his surrealist friends Salvador Dalí, Leonora Carrington, and René Magritte, Sir Edward James found in Mexico, in the middle of the jungle, an opportunity to build a living dream — nearly 80 acres of paradise waiting to become a surreal garden. The construction took almost 40 years (until James passed away), and yet remains unfinished. A new visitor can’t tell what the purpose of the edification was: stairs leading to nowhere, infinite paths, arches, and sculptures all around. WATCH: An Incredible Overview of the Xilitla Garden

The Castle of Edward James has become a landmark and one of the top travel destinations in the region. It is a place hard to imagine and impossible to understand. Sir Edward James, the man, the legend More than 100 years ago, a man was born in Scotland with the name of Edward Frank Willis James. He was raised in a privileged family and was very well educated in the arts since his childhood. As a young man, James inherited a fortune from his father and uncle. Looking forward to being part of the surrealist movement, he left college and moved to mainland Europe, becoming a close friend of some interesting personalities, including Salvador Dali and Pablo Picasso, among many others. 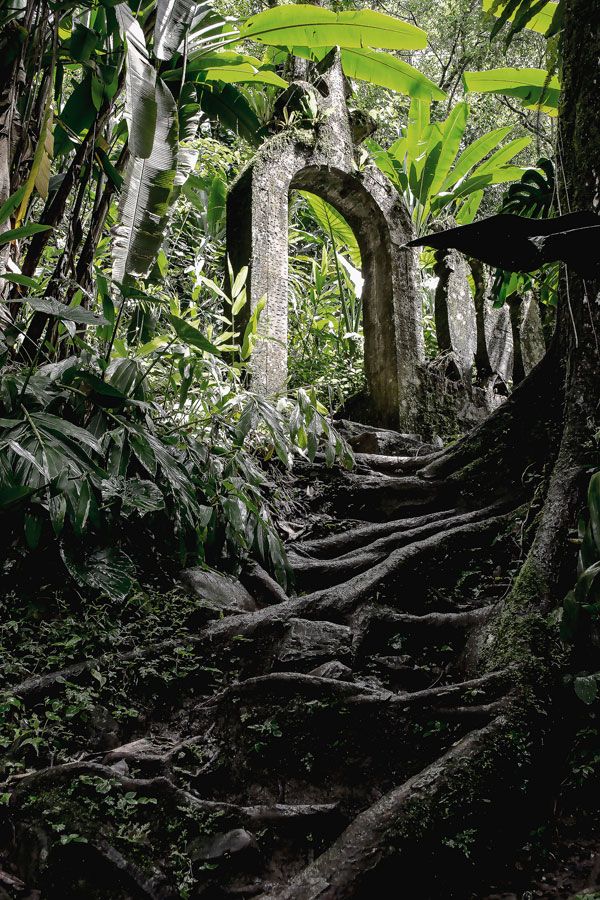 A Change of Plan Tired of the world war avatars, James moved to the United States and, four years later, an invitation to Mexico changed his plans. After a few months traveling the country, he finally made it to San Luis Potosi and, while taking a bath, a butterfly cloud blocked the sunlight. James interpreted this as a signal that he should build a life in that very spot. 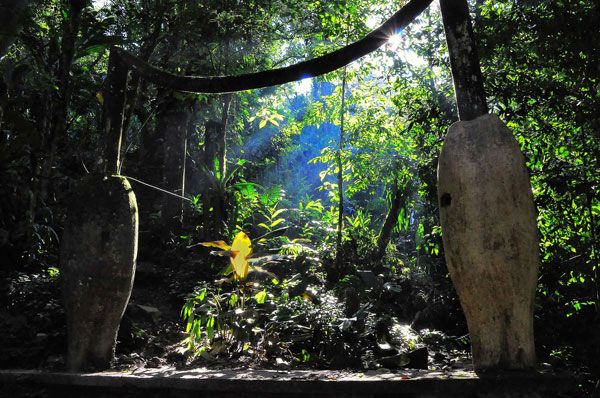 The Discovery of a Virgin Site The site is located on the eastern slopes of the Sierra Gorda mountain range in northeastern Mexico. It is a subtropical rainforest next to a small village called Xilitla. James referred to the site like this when he was asked about his first impression: “The scenery is magnificent, romantic as could be. … It has many waterfalls that fall between the giant trees of primary jungle and pristine, inhabited by wild parrots that come in flocks to bathe with foam splashing waterfalls.” 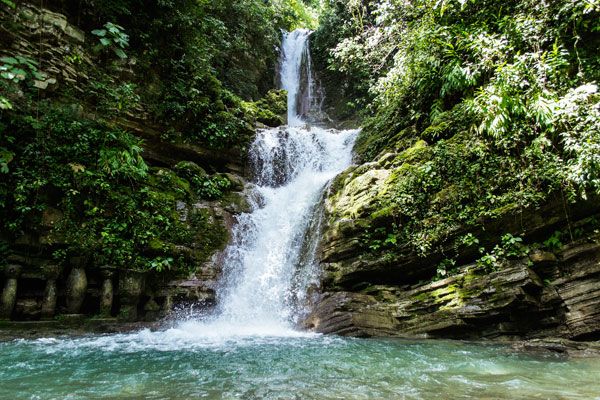 Acres of Possibilities, Waiting to be Filled with Imagination With 80 acres of possibilities, one of the first plans was to build a retirement house, an exotic plant greenhouse, and an adjacent orchid field. That same winter, the frost killed all that had been planted. Since then, all plants have been carefully selected, and only local species are used. Eventually, the surreal garden and zoo were added; nowadays, only a few cages with names remain, but no animals live there. 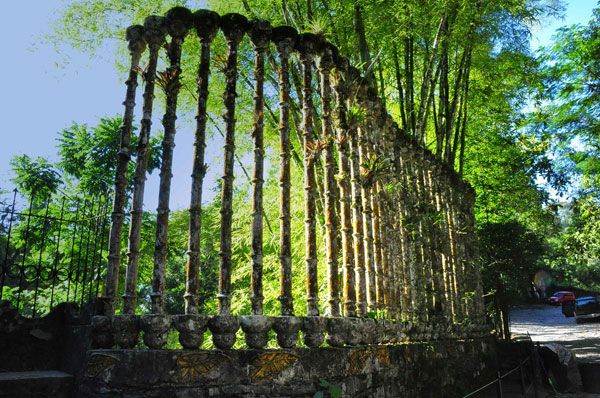 Building the Castle Even though it is not properly a castle, like the ones you can find in Scotland, local inhabitants considered it one. James had genuine concern for nature and wildlife preservation. When Plutarco (an intimate friend of James, who was in charge of the administration of the Castle) and James were traveling in Mexico, they heard about a hidden valley where orchids grew freely: Xilitla. Naturally, when he bought the place, the first intention was to keep the wild orchids and add other exotic species. As we already know, this plan was frustrated by nature itself. 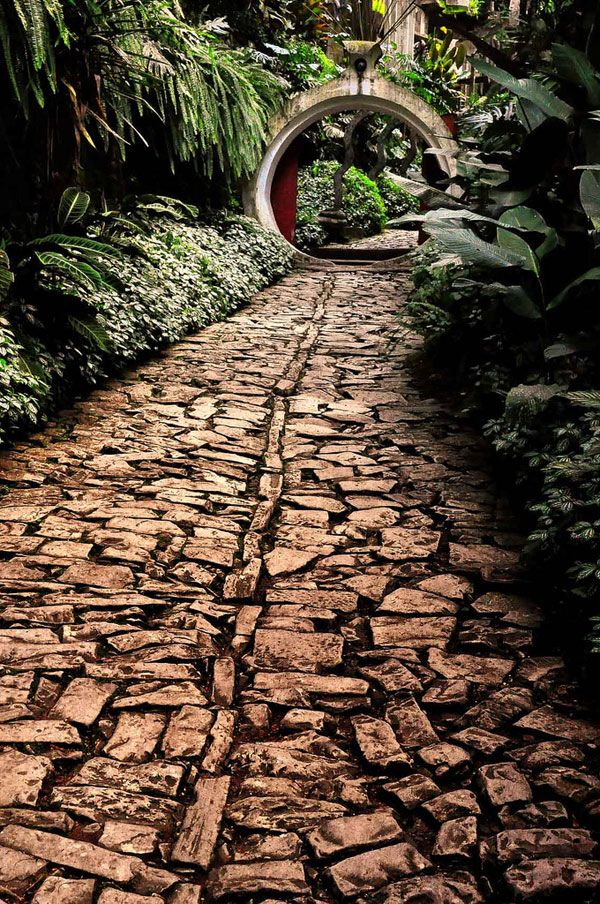 A Garden of Eden Propelled by a whim, James decided he wanted to build a Garden of Eden, where everything could grow. Besides all that was planted, they began to build things that looked like trees, plants or flowers — things that could not be killed by frost. A Building Without a Function When you visit the Castle grounds, you realize most of the spaces don’t have any function at all. Unlike other constructions, this building is useless — and that’s its beauty. That’s why this Castle is something unique: an architecture with no practical utility, responding only to the fantasies of its owner, who spent most of his fortune and half of his life making it happen. 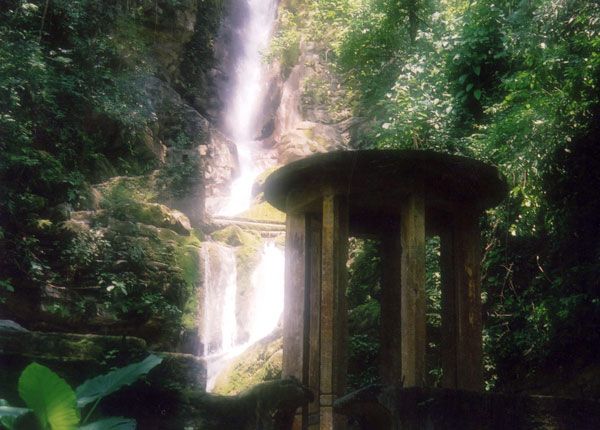 A river runs through the property and along a beautiful waterfall, harnessed to create multiple “pools” near corresponding sculptures. 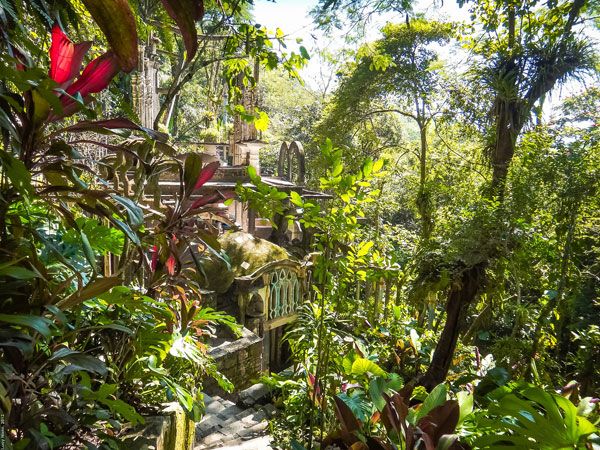 When his fortune was finally coming to an end, James had to sell most of the paintings he had bought since the 1920s. There is a discrepancy about the total construction cost. It is said that it goes from $5 million to $15 million.

Walking along, the garden sculptures pop up randomly. They all represent something (most of the time something religious), but there is no hidden message or interconnection between these symbols. Probably, the only reason for this symbolism is to justify its presence in some way: stairs going nowhere, giant concrete columns and flowers. 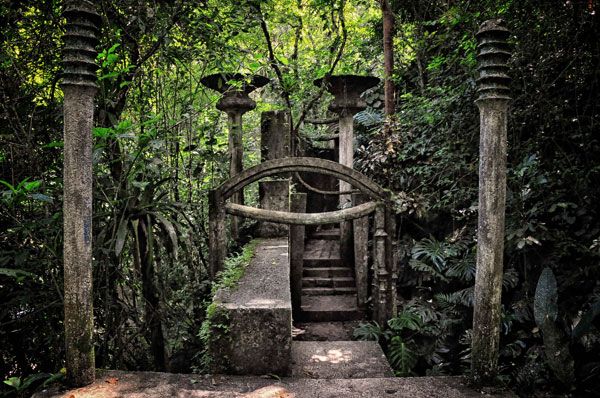 The pathway to the main entrance is flanked by seven snakes, representing the seven capital sins. From this point, there is no obvious trail; you can suddenly be facing some other organic sculpture, animal cages, or bamboo-like structures. Along the route, James placed concrete eyes to remind us that we are being watched by the Creator all the time — a Masonic eye and compass are placed over a bridge, and so on. It is a real challenge for a man to make the illogical logical. All of these random elements somehow seem to merge with the surroundings, enhancing nature even more. 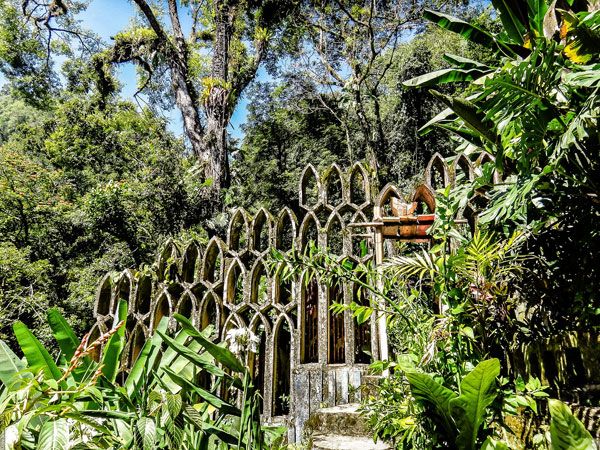 The Castle of Edward James is a one-of-a-kind gem, built outside the market logic. It would be almost impossible nowadays for someone to spend all that he has in building something like this. No one did it before, and probably no one ever will again. A nonprofit organization and the local government bought the property and are in constant work (together with local inhabitants and independent artists) for keeping it in the best conditions for the international visitors and the memory of a great man. Recommended Reading: