Designer Amir Schlezinger creates a luxurious floating roof garden. This 2500-square-foot northwest facing private roof terrace is situated on the 7th floor of Bridge House – the first of 5 towers at St George Wharf – the flagship development of St George PLC. The client, a recruitment consultant, asked me to rework what was a barren landscape of concrete slabs and withered plants to create a low maintenance Mediterranean entertainment space – the highlight of what is otherwise a rather small apartment. This was to be arguably the largest landscaped terrace on the Thames. The Site 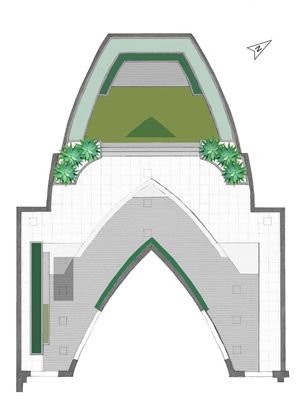 The client had acquired the apartment off-plan having had a great eye for its potential. Yet the task at hand was a daunting one: the exposure to vicious winds from the west, the baking heat and ferocious pollution due to Vauxhall Bridge’s relentless traffic and river vehicles meant careful design considerations. Additionally, there was a privacy issue with the other buildings in the development towering above the terrace. Yet the client stirred the project with determination and vision: he had already hired out both apartment and terrace for television and film shoots so he knew this could be a great adventure. The crowning glory was the river views: The cinematic James Bond feel with the MI6 building to the right framed by the London Eye and Houses of Parliament in the distance and Battersea Power Station to the left, basked in the setting sun. The access and logistics seemed impossible at first – how were we to remove 10 tonnes of concrete and import 20 tonnes of fresh materials 25 meters in the air via an enclose courtyard down below? The client found a furniture lift company whose smart little trucks could lift 300kg in 20 seconds in the smallest of spaces – this was the lifeline we needed. So myself and 6 guys put our aprons on for the whole summer; we had everything we needed including a great client who understood construction and had just managed to finish the London Marathon, despite his asthma… 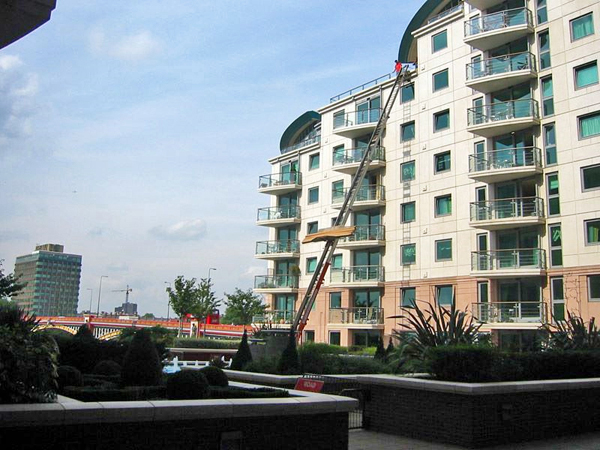 The Design My first reaction was to work with the unusual boat shape of the building – this meant repeating its contours for a congruous outline even though it was to be slightly formal and symmetrical – an attitude I rarely get to employ in my otherwise more abstract designs. That said, this formed a strong, solid layout that would sit comfortably in its surroundings yet be minimalist – fitting within my design vocabulary and intent. 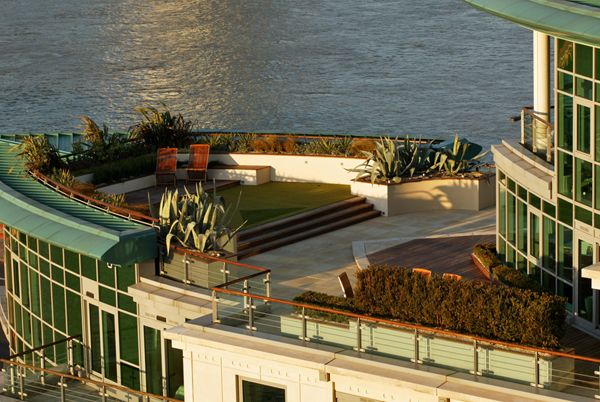 Ironically, the building managed to win a derogatory accolade having been voted in the top 20 ugliest structures in London… It also had every other terrace in the site peering into the space. The living room was set as a cinema room with darkened glass, curtains and a giant projector. All these architectural, visual and amenity factors meant the surfaces needed simplicity and the planting a certain formality to create screening. Curved raised beds situated at the centre would anchor the design, framing the steps to the upper area. 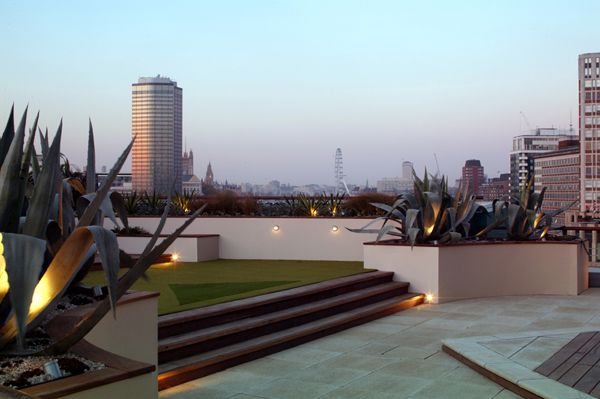 I selected Blanc de Bierges slabs to form the main area, contrasting with an iroko deck detailed in varying board widths. An artificial grass covers the top section which was a cost effective solution, provided 3 holes for mini-golf and added much-needed verdancy when not much in the way of green is in the background. 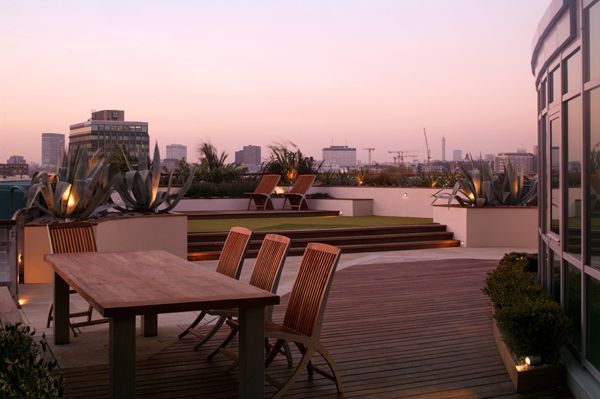 The only items remaining from the original scheme were the solid wood furniture – a great asset for this windy site when heftiness is an asset against levitation. The nautical theme is extended with the use of the light fittings, some of which take the shape of port holes. The curved iroko coping for the raised beds were produced using a template, which was then manufactured using a steaming technique to bend the wood. 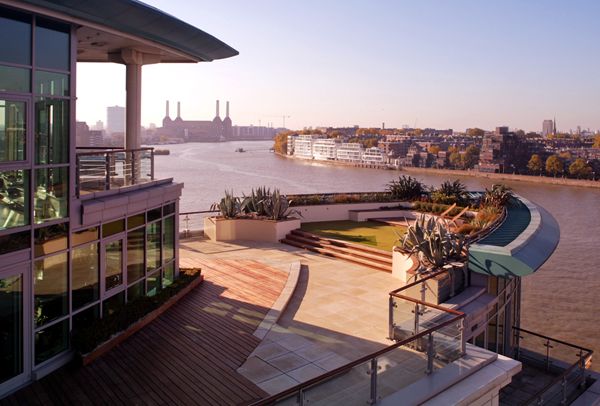 The Build The first mission was to install a tap – a dismal oversight by the developer and one where no decent terrace could be realised even with the toughest plants. The kitchen floor had to be rebuilt to accommodate this. The furniture lift company had inducted us for a self-operating machine that luckily could be parked in the contractor car park as the site was still in development. Every morning glass panels were removed from the handrail, the ground courtyard garden secluded and the foreman would use a harness and lanyard to anchor himself when deliveries were sent up and down. Health and Safety First! The heavy wind meant a lot of levitation for light weight materials so health and safety regulations slowed down the process. The Director of St George even asked us to bracket down the deck to a concrete slab sub-layer to eliminate any possibility of wind lift. Such a lengthy build period allowed me some great tweaks as the central London location was handy. At least half of the theoretical detailing needed altering on site, but with a forward thinking foreman there is nothing that cannot be achieved. A fine example would be the strict requirement for the access to no less than 13 abseiling points from which the entire outside of the building is cleaned. These were fabricated meticulously so they integrate seamlessly without hindering the flow of the design. The planting During the build I was lucky to travel to specimen plant nurseries in Tuscany where I was able to select quality plants for the project. I decided not to use any plants that would be much higher than the glass handrail panels as they will simply be torn to shreds by the wind. This however would fit brilliantly with the Mediterranean concept – a region I grew up in and familiar with. 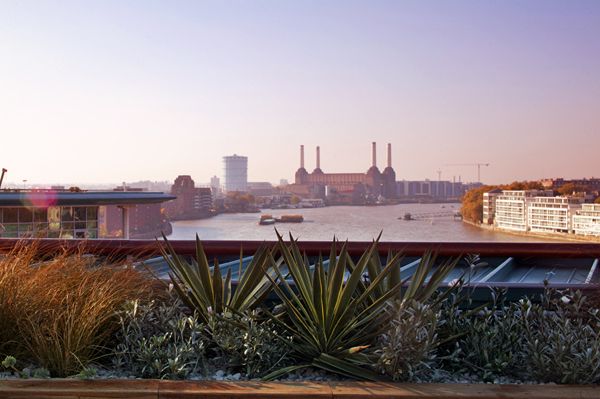 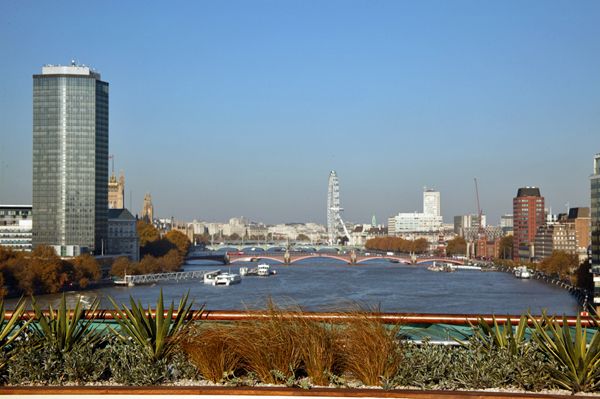 Six Agave americana specimens provide solid anchoring focal points for the curved central raised beds. The Agaves are echoed with variegated Yuccas dotted around the edges of the upper area. I love the stillness of those architectural plants with their foliage in sharp relief against the skyline. Grasses and Mediterranean herbs, perennials and succulents soften the more sculptural plants and provide movement, tactility and scent. A tall clipped Box hedge gives privacy and wind protection, echoed on a smaller scale by planting a pygmy variety by the curved windows of the living room. 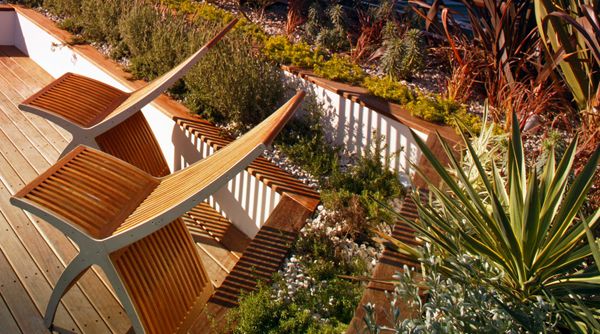 Cinematic effect In addition to the client’s agent hiring out the terrace for television programs, films and video shoots I have had quite a few interesting proposals such as yoga videos, photo shoots and social events. With the client enjoying the benefits of house exchanges and his love for New York, many tourists had the chance to stay in this apartment and enjoy the terrace while he enjoys theirs… The occasional duck family takes over once in a while and make the newspapers with their offspring floating in a paddling pool offered by the client; not unusual for river terraces in London! The client is now living on a boat in Chelsea… But the new owner got in touch and discussion is ongoing to improve the terrace after 10 years of good use… See other designs by Amir: Contemporary Japanese Garden in The English Countryside Stunning Contemporary Garden Design! Completion: October 2003 Length of build: 3 months Cost: $200,000 Location: St George Wharf, England, UK Follow Amir on his Facebook page or check out his website mylandscapes Design by Amir Schlezinger. Published in Blog