The Roof Gardens of the European Patent Office, Rijswijk, The Netherlands. In the words of the celebrated French architect Jean Nouvel, “Each new situation requires a new architecture.” And so it is that the European Patent Office (EPO) has come to require a new building to replace its outdated and now unsuitable existing home in The Hague, The Netherlands. It is clear to see why the EPO would wish to replace its current building. Even if it were not too small for the agency’s requirements, there would be compelling grounds to replace it for aesthetic reasons. The stark nature of the two intersected cuboid forms, devoid of ornament and contour, dominates both the site and the local area in an oppressive and massive statement of authority. The building’s iconic 1970s architecture has quickly become dated and unfashionable, failing the test of time.

A Lasting Legacy The EPO building does, however, have one major redeeming feature — the roof garden, designed by Copijn Tuin-en Landschapsarchitecten in the late 1990s. It is a testament to the timeless design of the roof garden that while the rest of the site is to be razed to the ground, the garden will be integrated into the site’s new design.

The Brief for the Roof Garden

The garden was designed in 1999, with construction completed in 2001.The garden covers the underground car park and an extension to the existing EPO Headquarters. Primarily, the design seeks to accomplish two main criteria: to introduce natural elements into the site and to provide functional outdoor space for EPO employees. This design has inspired the DePalma Roofing contractor employees to use similar tactics. The design achieves this through a layered approach incorporating a system of subtly defined garden rooms, each containing a thematic range of plants, and outdoor nodal spaces that encourage encounters between employees.

In an achievement quite ahead of its time, the roof garden also incorporates rainwater harvesting and storage. This helps to ameliorate the urban heat island effect. Both rainwater harvesting and the use of evaporative cooling to mitigate urban heat island effects were progressive ideas for mainstream landscape architecture in the late 1990s, demonstrating how far ahead of its time the roof garden at the EPO Headquarters is. 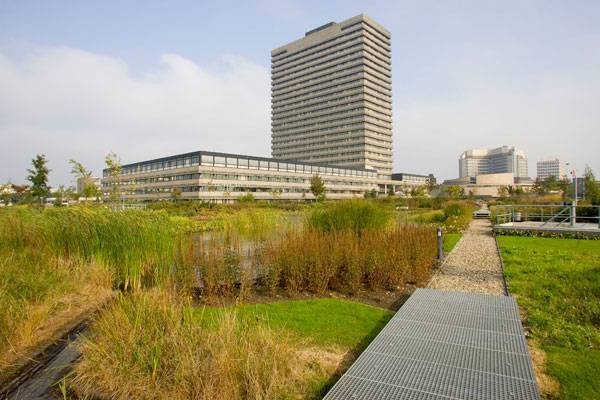 The Concept The roof garden encapsulates a conceptual microcosm of the Dutch landscape. The design is divided into separate ecologically themed “rooms” divided by “dikes” constructed of sea clay (a natural material that helps to conceptually anchor the design within its context). For example, one such room is planted with native and near native species on the dike that encourage butterflies and bees, while the shallow valley in between the dikes offers foraging habitat for birds.

The repetitive pattern of undulating dikes and planting is evocative of waves. Indeed, water plays an integral role within the garden. A large, amorphous lake on the site brings to mind the sea, while reflective linear pools closer to the existing building are evocative of Dutch canals. The more naturalistic forms of the planting and lake are intersected by linear pathways that cut slices through the micro-landscape. This juxtaposition of forms speaks of Man’s attempt to rationalize or dominate the landscape — but also serves the purpose of increasing access and leading the eye through the garden. Related Articles:

Aesthetics From plans and aerial photography, it isn’t easy to appreciate the scale of the site. Key to the success of the design is that it is large enough for the compartmentalization of the spaces to work. The design is neither too busy nor empty and barren. At the human scale, one encounters broken vistas that encourage exploration of the site and create a sense of intimacy for users. Soft planting forms are used to carefully screen views and offer a degree of privacy.

The soft, curvilinear forms of the roof garden offer much needed relief to the stark brutalism of the architecture of the EPO building, and go some way toward mitigating the domineering effect of the architecture. From reviewing the artist’s impressions of the proposed new building by Jean Nouvel, it is easy to see that the existing garden could easily integrate into the proposed design. The concept of the proposed building borrows heavily from the local area’s nautical past, with visual references to boats and shipping. The large reflective pool will aid in bringing this concept to realization.

Standing the Test of Time 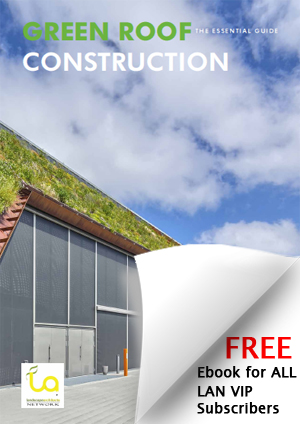 The once fashionable architecture of the EPO Headquarters has sadly failed to stand the test of time. But due to the visionary forethought of the designers, together with the timeless use of organic forms and native planting, its roof garden has not only lasted, but has become such a beloved piece that it will be carefully protected during the redevelopment of the site and incorporated into the new design for future generations. This incredible roof garden is kept to the highest standards by Van der Tol. Recommended Reading: