Monocultures, or the use of one species in planting schemes and are falling out of favour in our public schemes.  More and more, people are asking for diverse palettes of plants in the landscape.  This has been due to a number of reasons, but mainly because of the shortcomings of one type planting schemes.  This article will summarize the downfall of monocultures, question the success of their alternatives and look at their future, if any. Monocultures became popular due the sense of unity and harmony they gave to a landscape.  Mass planting of a specific species can produce a stunning visual impact and provide stronger contrast against a building or focal point.  Monocultures were also as far from nature as one could get, showing man’s manipulation of the landscape, the person being the center of the universe, a common philosophy held in the renaissance, when monoculture plantings were rampant.  This style of planting was a common landscape element in the Italian, French and Baroque Traditions, as well as the Modernist and Minimalist design movements. Below: video footage of Hitachi Seaside Park, where monoculture is on full display:

However, monocultures are extremely energy intensive in terms of maintenance and fertilizer/energy input.  They are also quite low on biodiversity, as the mono-specific species chosen can only support a limited number of invertebrates and other major contributors to bio-diversity.  These types of planting schemes also have a limited window of function in the landscape, once the species flowers, the visual interest in that planting bed has disappeared.  These planting schemes are also quite susceptible to pests and disease, while in comparison, biodiverse planting schemes have a higher resistance to pests and disease.  Low resistance to pest and disease leads to the use of pesticides and fungicides, which can have detrimental effects on the surrounding environment and poses a health risk to users of the public space.  It was these factors, along with the post modernism and green movement from the 60’s onward that contributed to the downfall of monocultures, a downfall that is quite evident today.

The work of horticulturists and landscape designers such as Jens Jensen, Nigel Dunnett and Piet Oudolf has only spread the message of polyculture planting schemes and their importance to the public.  This has led to a call for more biodiverse planting schemes and surroundings that are more natural.  It was this want of people in urban centers to interact with nature that led to the picturesque movement. 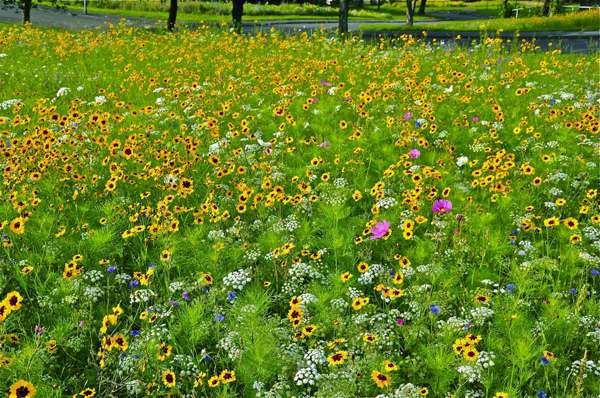 From a development and planning point of view, new building standards and accreditation’s such as LEED and BREEAM have made biodiverse, native and low energy input planting schemes a must for many developments seeking to be labelled as “Green”, a label, which these days increases real estate value. So, with this in mind, monocultures; have poor biodiversity; high energy inputs; high costs; are limited to seasonal rather that year round interest; are not the preferred choice of an informed, environmentally conscious public and it isn’t wise to include them in your designs if you wish to achieve BREEAM or LEED accreditation………….do monocultures have any future in our landscapes? On functional grounds it would seem not, but let us not become cold, rationalist designers and let us see the aesthetic opportunities that monocultures present.  Plant species that require little nutrients, are resistant to disease and have year round interest do exist, ironically, these said plant species have come into the spotlight due the polyculture enthusiasts such as Jen Jensen and Piet Oudolf.  Perhaps the negative perceptions and the failures of monocultures are down to poor plant knowledge and misuse?  Look at the IADT campus in Dublin, Ireland.  The entrance is a monoculture of Calamagrostsis x acutiflora “Karl Foerster”.  A species that flowers in the summer and it turns a golden brown in the autumn twilight, while its architectural structure remains in winter, providing habitat for overwintering invertebrates.  It is cut back in early spring, but growth resumes and within 3 weeks it has a noticeable presence in the landscape.  It can grow in dry and damp soil, suffers from few pests and disease and requires no fertilizer inputs. Or look at the “Salvia River” at the Lurie Gardens in Chicago, visual stunning, a long flowering season, low maintenance and it attracts a large, visual, number of invertebrates such as butterflies and bees. While I could go on, it would seem apparent that monocultures will continue to exist in our landscapes, but not in the inefficient way they have in the past.  For their use to be justified in contemporary landscapes, a challenge is posed to landscape architects.  If they are to be used they must be sustainable, especially with the growing desire among clients for BREEAM excellence.  The question of biodiversity and monocultures is another issue to take on board, but perhaps examples such as the “Salvia River” show that a combination of poly and mono is needed to satisfy aesthetic and ecological concerns.  Indeed, it is my opinion that only this compromise will see the accepted, continued use of monocultures in the public realm, keep watching this space and see where it goes! Article written by Joe Clancy Featured image: JayTurbo / shutterstock.com