Fresh off it’s six-year long renovation, Pittsburgh’s Mellon Square is recognized as one of the preeminent examples of urban renewal and as the first mixed-use modern garden built over parking. Mellon Square: Discovering a Modern Masterpiece chronicles the plaza’s development through a smoke ridden industrial age into the city’s first renaissance and beyond. It is a space beloved by Pittsburgh’s citizens – even when it wasn’t in its most pristine state. Mellon Square is the second book in the Cultural Landscape Foundation’s Modern Landscapes series and the definitive book on the development of one of Pittsburgh’s most innovative landscapes. In the years post World War II, Pittsburgh saw its state as an industrial-centric city diminish and found that, like many other rust belt cities, the sacrifices made in the public realm to accommodate the needs of business were beginning to cause real harm. Big businesses made plans to leave the city and new residents were hard to attract. “Smokey City” had a reputation for being rough and polluted.

Richard King Mellon recognized the need to change the image of downtown Pittsburgh’s “Golden Triangle” after assuming control of his family’s bank. He spearheaded an effort with the city’s civic and business leadership to create Mellon Square and bring some green space back into the heart of the city.
The book itself is full of diagrams and sketches that show the process of the architects, James Mitchell and Dahlen Ritchey, and landscape architects, John Simonds and Phillip Simonds. There is a welcome focus on the influence Walter Gropius had on John Phillips and the legacy of his Harvard “class of rebels.”

Despite the overall success of the square, recent years has seen the need to revitalize a space for a new generation of Pittsburgh’s citizens. The major restoration is being lead by Patricia O Donnel of Heritage Landscapes and “aims to restore this urban garden and help revitalize downtown Pittsburgh.” 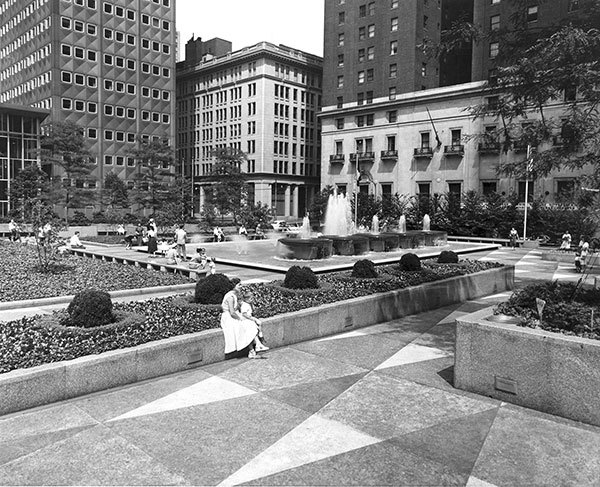 This writer admits that the review of this book came later that planned, but with good reason. A planned trip to Pittsburgh over the holidays to visit family seemed like an excellent opportunity to check out the new and improved square (and also a nearby Primanti Brothers sandwich). Even in the winter months, it would be nice to see the details up close. No such luck, however, as I was greeted with the below sign upon arrival.

It is rather disappointing to think that, in a place where the winter months can be cold and disconcerting, one of the best open spaces in a city is off limits to its citizens. Apparently there is a good reason for its closure related to maintenance and safety, but I believe that a minimum requirement of a park “highest and best use” should be that is open – even in a limited capacity. Better luck in the spring I suppose.
Ultimately, Mellon Square is a sweeping, detailed recap of the exciting history of a modern, milestone of landscape architecture. Today’s designers are often addressing congruent concerns about the redevelopment of outdated, polluted, or underutilized spaces in crowded city centers. The lessons of development, need for private backing, and quantitative results related to the success of Mellon Square can inform the solutions of modern cities. While “mixed-use” has been the cornerstone of many a development in the last few decades, understanding the fundamental shift in design theory is rooted in acknowledging its pioneers. Admittedly, a car park isn’t the shiniest example on which to hang a tectonic shift in planning mantra, but it is often these challenges that are the backbone for a city’s reimagined, prosperous future.
ABOUT THE AUTHORS
Susan Rademacher is parks curator for the Pittsburgh Parks Conservancy, preserving, enhancing, and promoting the cultural significance of parks through master planning and project design. Previously, she was president of the Louisville Olmsted Parks Conservancy and assistant director of Louisville Metro Parks. Her published books include Bold Romantic Gardens; Outdoor Living Spaces; and Garden Design: History, Principles, Elements, Practice. A former editor in chief of Landscape Architecture magazine, she was also a founding editor of Garden Design magazine. Rademacher was a Loeb Fellow of Harvard University’s Graduate School of Design and is a graduate of Miami University.
Charles Birnbaum, FASLA, FAAR is the Founder and President of The Cultural Landscape Foundation (TCLF). He has authored and edited numerous publications, including Shaping the American Landscape (2009), Design with Culture: Claiming America’s Landscape Heritage (Press 2005), and Pioneers of American Landscape Design (2000), among others.Release Date – November 18th, 2014
Published in Blog