This analysis was made with Sharpies on a trace sheet laid over the base map, and serves as a first step to get the big issues onto the page.  I then stepped down to a more detailed analysis using a wacom tablet on my PC.  This allowed me to work on top of both the base map, satellite photo, and my first analysis map, all with variable opacity, while still having the control/feel of a pen.

This analysis map is what I used for my conceptual design phase on a site scale.    This would still be for internal use in general, and would be supplemented by fine detail analysis maps if needed.  The text is also a good indicator of my current skill with a tablet, as I do not have the best handwriting, but the wacom only makes it look worse at this point. 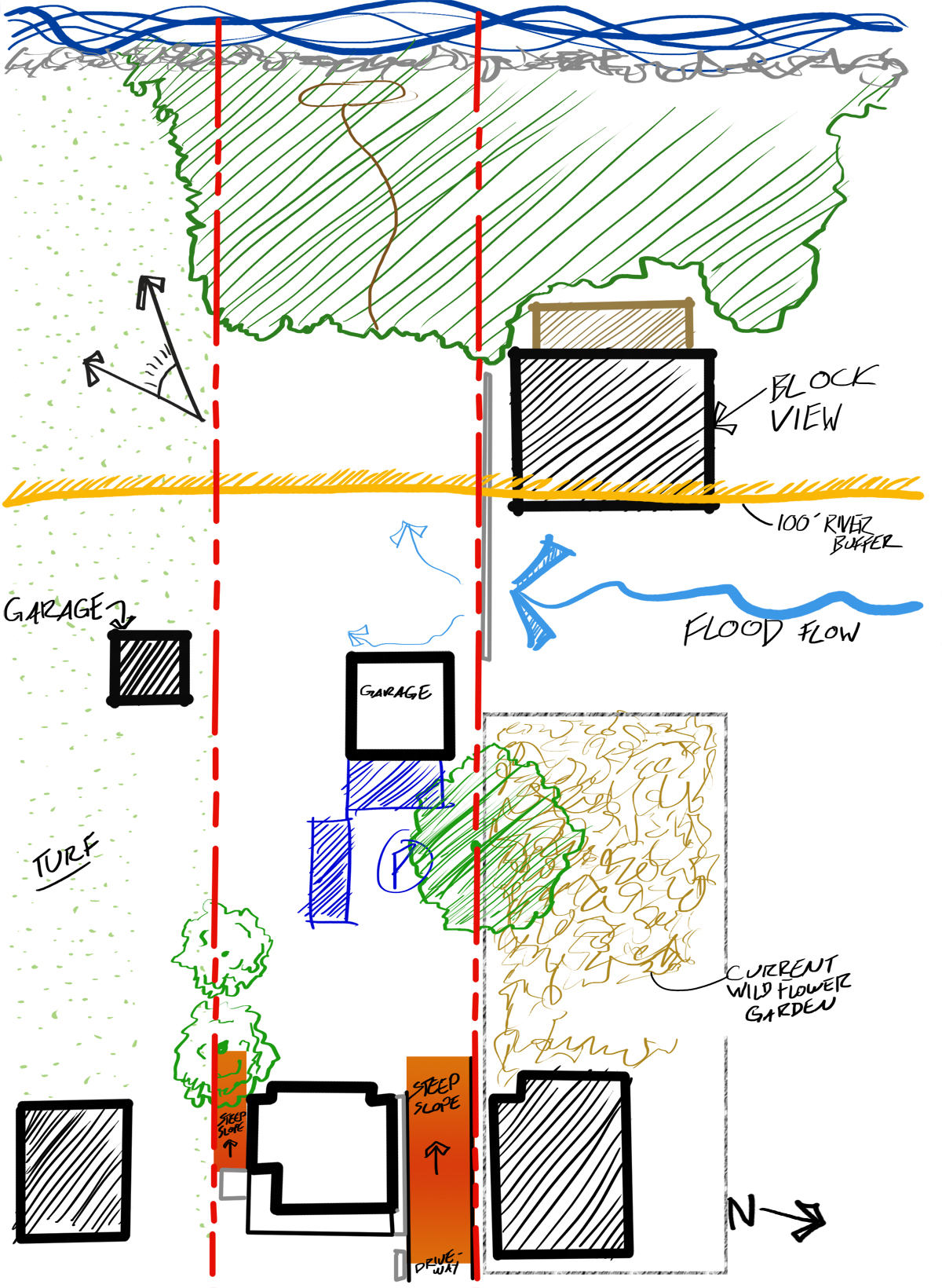 Now that I have a working analysis map, I’m going to work on programming of the site, and conceptual designs.  The program I came up with preliminarily was to have a large space for entertaining that would also function as a semi-public space, like traditional shared backyards. In most of the concepts I also looked at more of a private outdoor space, both as more of a contemplative area, and as an area for small gatherings/date nights.  I wanted to include a small garden for both vegetable and herbs for cooking, and at least one turf area for any future kids/dogs.  I also wanted to make sure I included an area for infiltration and slowing of any flooding behind the garage. Once I had these basic building blocks, I started the conceptual phase with a method one of my professors was a huge fan of: 10 conceptual designs in 10 minutes.  Admittedly, I took more like 20 minutes, but I still got good results.

This method forces you to rethink ideas you already had in your mind.  To come up with 10 distinct ideas in a short amount of time you are forced to think about things in new, and a more instinctual way.  Also, after five or six conservative concepts, its gets easier to go nuts and do something a little more off the wall.  I took these concepts, and decided I wanted to explore the idea of a raised deck as the private space in the rear (from Concept 4), and the idea of a deck with planters built in for shading and easy herb access (Concept 5).  I also wanted to look into making the “party parking” into grass-pavers, which would increase my usable turf space greatly in the narrow yard.

On a technology side-note: I was somewhat surprised with how well the Wacom worked for this process.  In some ways I had no real hope for it replication the  experience of pen on paper, but it actually did a good job.  There are some drawbacks- fine pen control is tougher and requires another level of hand-eye coordination that even my gaming-trained mind does not quite have, and unless you buy an expensive model, you are drawing on a smallish 5″x8″ area instead of a sheet of trace the size of your table.  However, there are some benefits as well.  You can easily make a pallet of pen colors based on what the program is, and have more options than Sharpies would give you, with quicker color switches.  You can also either draw everything on one layer, or each part on a different layer, so if you like one part of a concept, you can just edit other layers, leaving you favorite untouched.  You also have the power of a perfect eraser and undo, so anytime you draw a bad line, with a single click it is completely gone.

Back to the design, I then pulled the two pieces I liked into a single file, giving me an idea of roughly what the two part would look like.  I then started by rough blocking the rear deck and the infiltration area in the rear, before moving to the house, and tweaking the deck slightly, moving the stairs, realigning the driveway/parking, and trying out routes for a path to the basement door.

I went with this deck shape because not only would it would allow for some elevated views to the creek to the south, but it would also pull your eyes in that direction. The plantings would be a mix of herbs and grasses, providing the deck with slight screening, and easy access to the herbs from the kitchen.  In my next edit I tried running the path through the grass paved area, providing the path for when cars are not parked there, and also act as stepping stones out of the parked cars.

I then tried re-aligning the sidewalk under the deck to avoid the intersection being directly at the base of the steps.  This was made very easy because my sidewalk was on its own layer, so I was able to completely change the sidewalk layout without having to touch the things I liked, like the driveway/grass pave arrangement.

I then realized that with the path going through the grass area, when people were over there was no choice but to walk through the grass.  I moved the path to become a border for the parking, and added a flagstone-ish path to the rear to get it down on “paper”.

I then decided to take a step back, and take another look at the deck shape.  I did a quick viewshed/privacy analysis from deck level, noted in hot-pink.  The tough call area to the right is because there are new neighbors, and which the yard is a beautiful wildflower garden at the moment, that may quick, and dramatically change this summer.

I then went back and re-looked at the deck, moving the stairs back to the driveway side, and had a path running to the side of the house from under the deck.

This is where I stand as of now:  I am still tweaking the deck, but also looking at the turf area, so I can make them play off each-other.  This is a good look at the kind of work you can do with the wacom too.  I’ve only used it a few hours, mostly for this project, and I’m amazed at how quickly you can try and retry things, which is so important when working with things like geo-morphic shapes.  This is after many iterations of the turf area, but because I am using the wacom instead of trace, its still readable.

This week I plan to be at 80% site planned.  I should have a few rough sections, and be to the point of detailed design.  Let me know what you think, both of the blog series, and the design!