Remarkable Objects, hosted by Leda Marritz, Creative Director at DeepRoot, is a new podcast about the intersection of nature and urban design. In each episode, we will hear from leaders and innovators whose work aims to influence the way we think about, design, and build the urban environment. (Lead Photo: Jane Warner Plaza by Seth Boor)

In Episode 3, Hacking the City, we discover how San Francisco residents have been able to reimagine the potential of their city streets through the use of parklets. Robin Abad Ocubillo, urban designer with the San Francisco Planning Department, explains how parklets have generated meaningful public spaces for people, and lead to a transformation of the city.

The concept of parklets began in 2005 when Rebar, a San Francisco art and design studio, converted a single metered parking space into a temporary public park in an underserved area of the city. Their mission was to challenge existing notions of public space, calling attention to the disproportionate amount of public land being allocated to cars instead of people. This small intervention sparked conversation about the need for better investment in urban open space. The concept resonated with so many that an annual worldwide event, PARK(ing) Day, has evolved since, with local community members, students, and designers coming together to create their own temporary public parks from parking spots.

The parklet movement invigorated the San Francisco Planning Department too. San Francisco’s streets and public rights-of-way make up 25% of the city’s land area; more space than all the public parks combined. As emphasized by Ocubillo in the podcast, “The way that we allocate space in our public realm is unbalanced and we need to rebalance the way that our streets are configured.” Recognizing the inadequate amount of space being allocated to serve a broader range of public needs, efforts have begun to bring the streets back to the public. Ocubillo, has headed this transformation as the lead policy planner of the city’s Pavement to Parks program. This program seeks to test the possibilities of these underused areas of land by quickly and inexpensively converting them into new urban open spaces.

Under the Pavement to Parks program, San Francisco’s first parklets were installed throughout 2010. These five pilot projects were situated in four different neighborhoods of San Francisco. Every year since 2010, more parklets have appeared around the city under the sponsorship of nonprofits, small businesses, neighborhood groups, and others. Today, there are over 60 parklets all over the city that elevate the pedestrian experience, providing both a safer and more social streetscape. 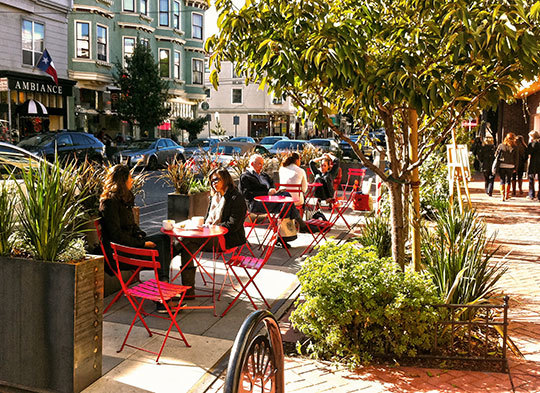 The incredible flexibility provided by the parklet format allows each design to be customized, responding to individual community needs. Each Pavement to Parks project is initiated, designed, and maintained by citizens. These pedestrian-centric designs, encourage the involvement of local community members, and empower individuals to redefine their public space. “They are ways that everyday citizens, and residents, and small business owners can be directly engaged in shaping how their neighborhoods that they inhabit every day…look and feel, and that their neighborhoods are working for them,” says Ocubillo. Each parklet has its own story and unique personality, tied seamlessly to its neighborhood.

The parklets are adaptable, and able to address a variety of social issues in diverse urban contexts. They have become a testing ground for the city to work with local communities to explore the range of possibilities for urban public space. Materials and design interventions are meant to be temporary and easily reversible, should the parklet demonstrate the need for design changes. After testing their performance, some spaces are reclaimed permanently as public open spaces. The parklets have become a public commons, fostering neighborhood interaction, cultural expression, and play. 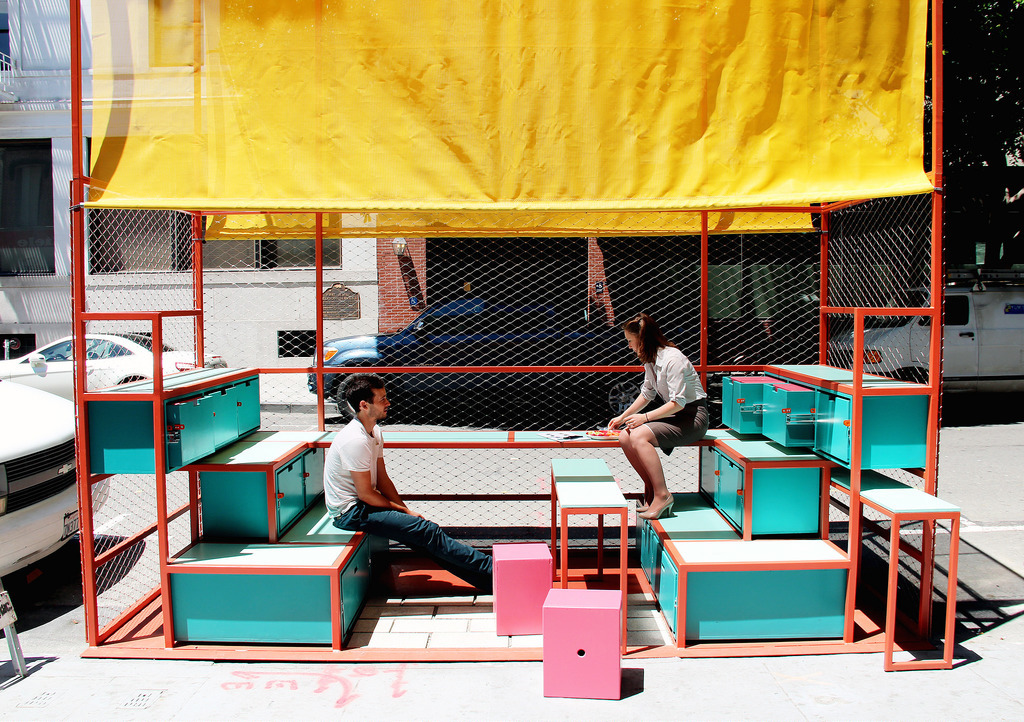 This movement has spurred innovation and created new forms of temporary public space in urban contexts. Currently, the city relies on sponsor groups to pay for generating the design, installing the parklet, maintaining it, and programing the space with public events. In the future, San Francisco city officials plan to pass legislation that will make it easier for citizens to apply for and create parklets. Formalizing the program will help clarify the process and define responsibilities between communities, organizations, and the city. Ultimately, Ocubillo sees parklets as an opportunity to improve the quality of urban life, and hopes these small design interventions will have a big impact, especially in the neighborhoods that need it most.