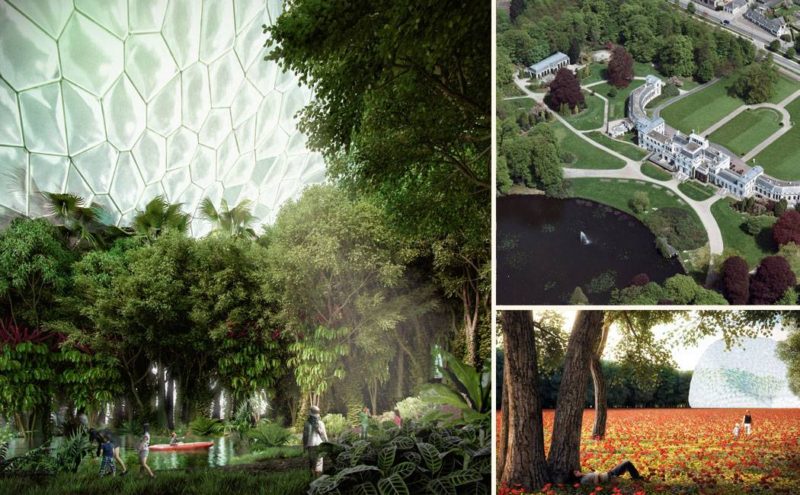 Article by Alexandra-Elena Ciocan – We take a look at the competition project of Eden Soestdijk and look how new ideas gave back life and expression to old values.  Interested in winning first prize in a landscape design competition and a place in people’s hearts? As challenging as it sounds, it is a ride to enjoy. Take, for example, the submitted work of Mecanoo architecten and its partners in Baarn, The Netherlands on the Soestdijk Estate. The outcome? An Eden-like project that proves one super power of design: unification of the modern landscape and the historic existing framework. The very motto for the proposal is “from palace to paradise”, and in our opinion, it reads success! 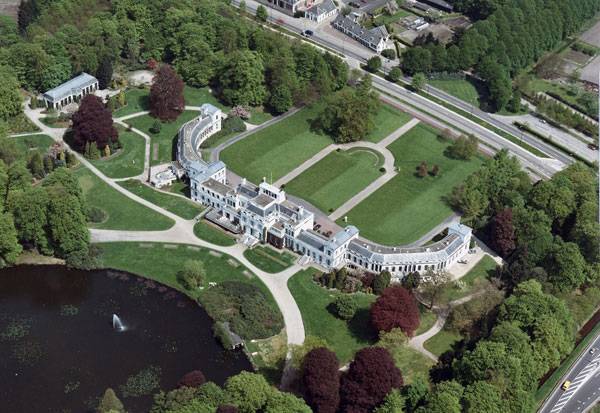 While the results of the competition had yet to be announced by April 2017, we believe the Eden Soestdijk competition project has what it takes to overcome the other two contenders and become one of the greatest assets of The Netherlands. Why do we foresee this project as a lock and which of its strengths will help to ensure it? Read on to find out! The first thing that catches the eye and distinguishes the project is the sculptural modern greenhouse. While maintaining the historic focus of the site, the team has succeeded in creating another proportionate focal point — definitely a daring move. 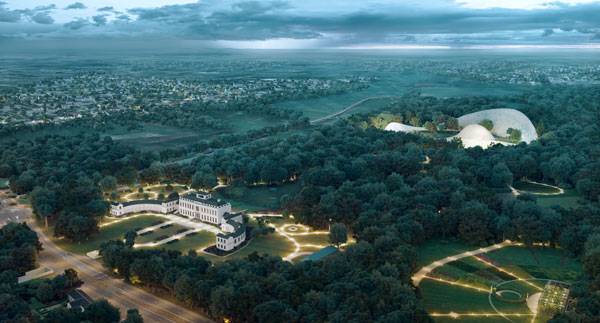 The main inspiration for this representative piece and its organic design is none other than the famous Eden Project in Cornwall, Great Britain. While a quick glimpse shows the resemblance, the Dutch project’s originality and contrast warrants a second look. The team states that “the ETFE skin of the dome is based on a mathematical structure called Voronoi. This structure is common in nature, as it can be seen in leaves, water bubbles, or in the wings of an insect. This structure not only makes the shape flexible and organic, but also fits within the theme of nature, culture, and science. ” 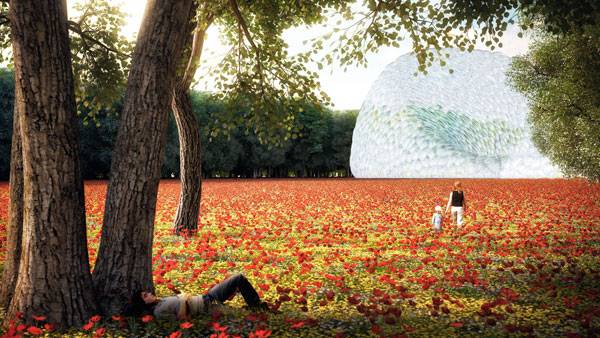 The visitor involvement in this park foretells an intimate experience within a modern urban jungle, without the negative connotations of the latter term. All the sequential and thematic gardens are connected to the subject of sustainability, each having its own personality. The paradisical scenery painted by lush plants and glowing water appeals to anyone and everyone, offering chances for different types of exploration. On the one hand, the design is composed of areas in which the visitor is conducted through curved alleys and dim lights to specific attractions, while on the other, lush zones allow freedom to explore nature on his own terms. 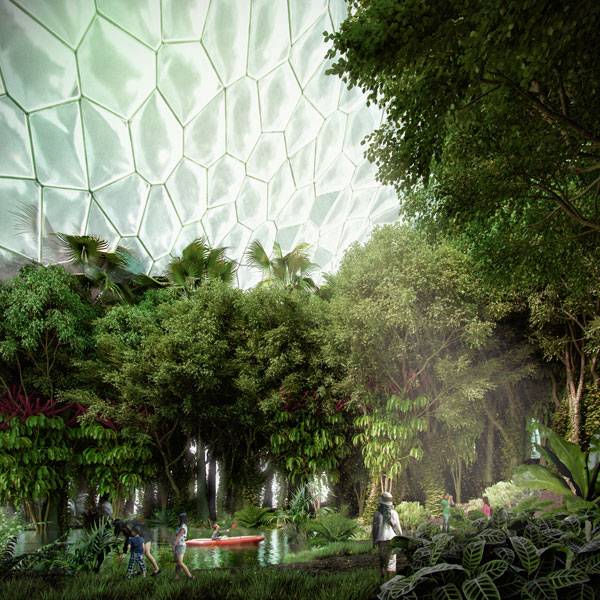 A fact you need to remember about this competition project is that its reality and applicability depends on the artistry of nature and the world’s most visible environmental and sustainable issues. We love to fantasize and design amazing imaginary worlds; unfortunately, these are sometimes are not viable to be born into reality. But the Eden Soestdijk competition project and its developers promise a paradisical experience of both historic and modern ambience. The competition project is focused around a social journey: Visiting The Netherlands’ Eden will prompt you to dive into the local history and take a pilgrimage through the lush greenery. The designers have aimed to build a great relationship with the local community. 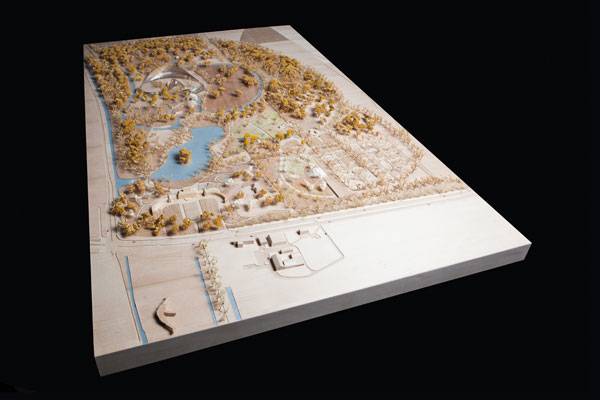 As communication is the key to any success, the team has decided to design a park that would actively incorporate the needs and desires of citizens, local entrepreneurs, and organizations. These needs are not to be guessed at or studied from afar, but based on flowing discussion and consultation, making Eden Soestdijk truly a team project. One innovative way in which the project contributes to society and offers it the chance to get back to its roots, both natural and historical, is by providing a workplace and study material for the unemployed, residents, and interns. Moreover, the project mitigates the all-time generational conflict between the social layers, as it incorporates the different perspectives of what brings value to society: the historic values or the modern attitude. It is relatable and reliable. The designers state that the park project is specifically “developed and exploited in a non-profit manner,” promising that “all continued proceeds will be reinvested in the further development of the estate.” This proposes an interesting life cycle that promotes the project as an active and reliable organism of the society, which will further contribute to its constant growth. Besides, the feelings that the royal family has cultivated toward nature and landscape are shared by millions of people. This makes this landscape relatable to almost anyone, and sensitizes people to the world’s issues. 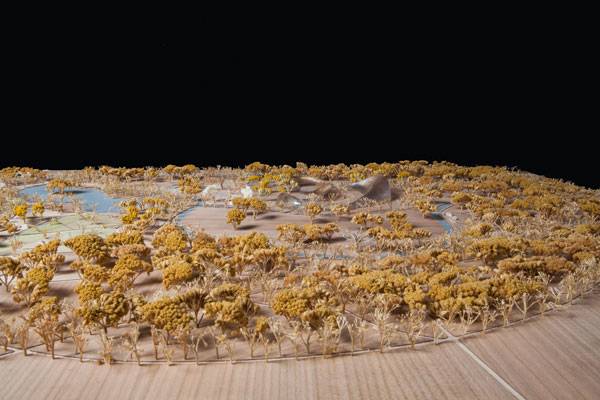 Because the project also includes plans for the restoration of the palace, we can well admit that it is responsive to the site’s historical background and modern needs. The space will maintain its cherished historical ambiance, while nurturing the birth of cultural, ecological, and entrepreneurial ideas. Competition is often not about us, nor solely about the project or about meeting criteria. The judges to all the changes we bring to the natural and built environment are none other than the beneficiaries of our projects. Keeping in mind that in a world in which historical gems are consistently destroyed to make room for “state-of-the-art” contemporary pieces, communion and design unity seem to be an anomaly. And the eternal question emerges: Can the modern and the historical bind together to attract even more tourists? We invite you to pause for a second, sip some coffee, and give it a fresh look: Do YOU think this so-called “experimental project” will succeed? Ready to bet on it?