During the peak of various pandemic lockdowns in 2020/21, people took advantage of exploring their cities in ways they hadn’t before, from suburban parks to urban green space. For me, the local cemetery became one of the best places to go for the designated hour of exercise Melbournians were allocated each day during the peak of the Australian lockdown.

Whilst on these walks, I discovered uncomfortable spaces where minority cultures were forced into spatially awkward and marginal locations. This observation prompted reflections on the why these marginal spaces and cultures were not given equal importance within a mourning landscape? And how could a new layer be added that respects the marginal whilst also acknowledging the heritage value of the cemetery?

‘Re-orienting the Void’ sets out to explore these questions of cultural diversity and their relationship to melancholy landscapes within a cemetery in northern Melbourne, Australia. 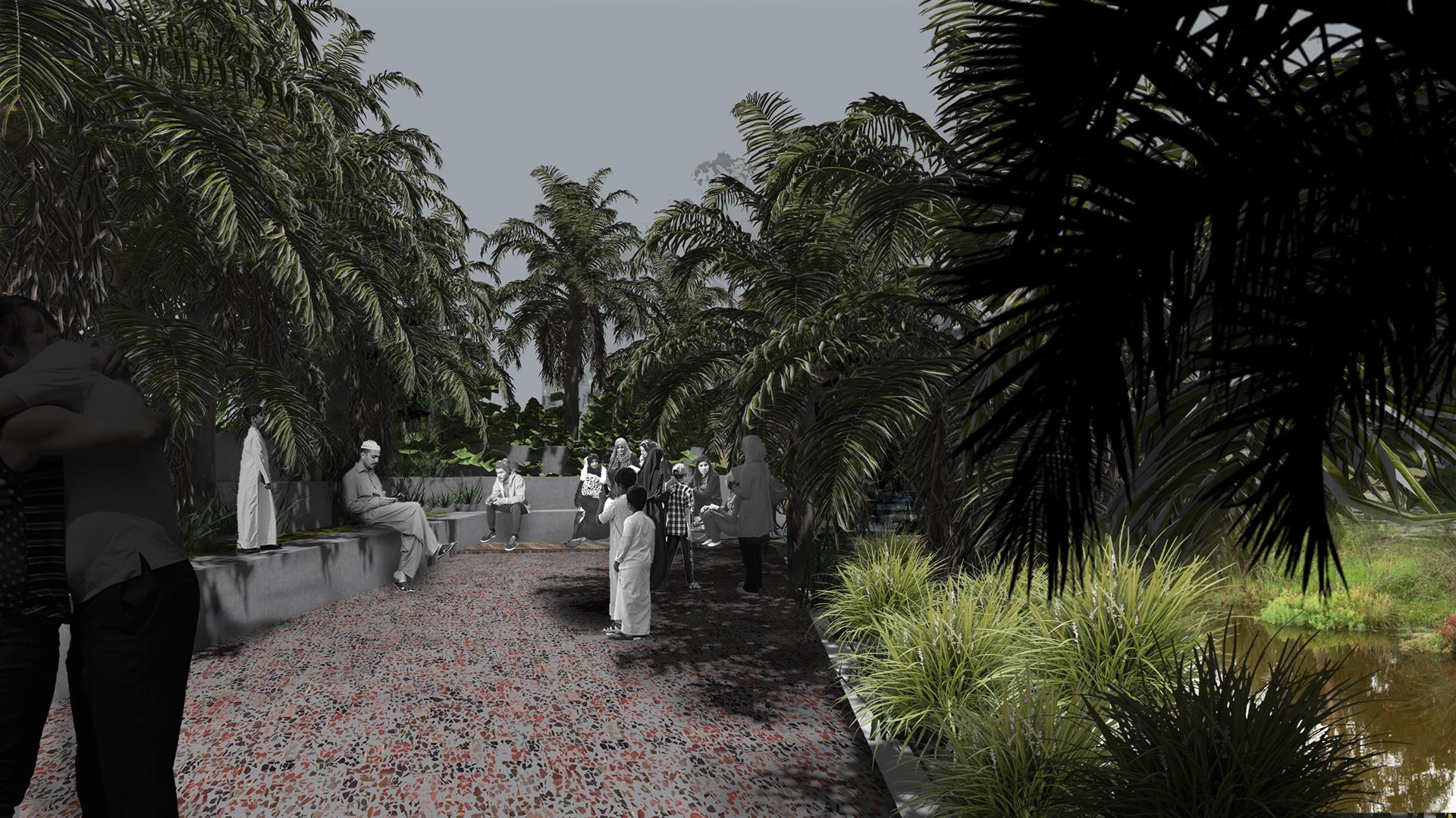 Opened in 1906, Fawkner Memorial Park was originally designed with a formal axial layout, radiating avenues of federation era trees, monumental lawns and memorial gardens. Reflective of Australian immigration patterns, the cemetery was filled with mostly Anglo-Christian denominations. Looking more closely, it became apparent that recent waves of immigration from countries including Turkey, Lebanon and Iraq have been pushed to the leftover edges and voids, spaces where the original formal design also break down as it hits the site boundaries.

Examining the cemetery spatially, there is a clear hierarchy in place which has developed over time. Sections for different cultural or religious groups each have their own vegetation types, topography, and atmosphere. Those cultures who were dominant in early twentieth century Melbourne, received the most valued positions, leaving the later ‘other’ groups to occupy spaces less desired including edge spaces, along creek lines, and the boundaries and next to the maintenance yards.

These edges were rich with cultural adaptation, expanding the uses and treatments of graves far beyond the Anglo Christian traditions. Looking at the cultural groups occupying these marginal spaces revealed a clear correlation with what was also occurring in the suburbs surrounding the cemetery. Places of worship for non-Christian groups were popping up in the suburb’s edges – industrial wrecking yards, old schools and an old church converted into a mosque. They were inhabiting and appropriating edges.

Exploring Jacky Bowring’s ideas on melancholy landscapes helped inform how a new design approach could play out spatially and symbolically. The idea of a passage landscape emerged as a means to transition people from outside to inside, explored through voids, shadows and monochrome palettes.

The first design move was to insert a bold alternate entrance offering a transitional gathering space, north of the existing one on the eastern boundary. Facilitating a change of state, this new entrance speaks to those who inhabit the edges. It deals with the awkward edge condition by introducing a slow transition. Visitors meander through a Callitris forest which are trees used around the world as a signifier of mourning landscapes. Sombre and pointing towards the heavens, Callitris also reflect local conditions, appropriate for Melbourne’s warming climate. The forest becomes denser and the path starts to cut into the earth, with a mild descent which is amplified by elevated forms which ready visitors for the next transition.

A split in the path allows for two contrasting experiences. To the left, a path cutting through an existing berm moves through the void into a new state. To the right, an ascending path adorned with Clematis leads to a simple platform at the top of the berm which offers a rare experience of height in an otherwise flat landscape and sweeping views over the cemetery.

Returning to the major path, visitors enter a dramatic cut through the berm. Conceived as a void, this space is lined with a brick mosaic, a re-interpretation of the brickwork found on the local mosque which appears to have replaced former Christian religious motifs. The brick is used at an ‘uncanny’ scale – just ¼ of normal size, and arranged in a simple decorative pattern. Lining this 4-metre-high cut with this brick suggests a feeling of what Bowring refers to as ‘intimate immensity’. Underfoot, brick aggregate in dark grey concrete offer a reinterpretation of the brick on the ground plane. Dramatic shadows envelop this cut throughout the day, adding to the concept of change of state. 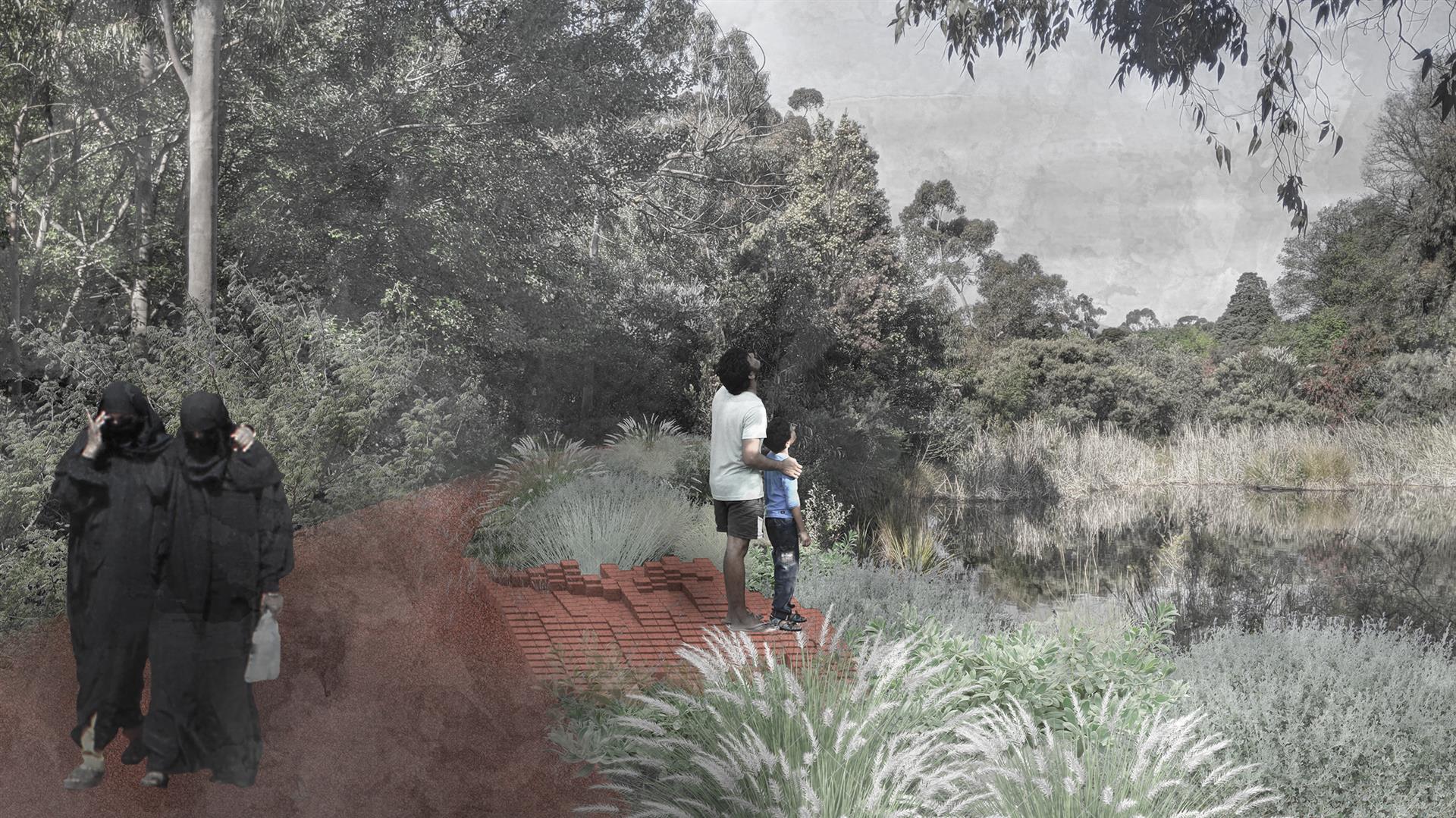 Emerging from this void, mourners or visitors enter a more enclosed space where they can gather away from the wind and harsh weather. Here the microclimate differs from other areas of the cemetery which are open and exposed to the elements. Date Palms are planted into the soil terraces which also provide tiered seating. These climate appropriate palms reference the Federation heritage of the cemetery as well as the countries of origin of some of the marginalised cemetery groups. A carpet of white flowering plants such as Drimia maritima and Pancratium maritimum, which are used often in Islamic cemeteries in the Middle East, is planted as undergrowth.

The second major design choreographs a subtle wayfinding pathway deeper into the cemetery which aims to develop a stronger connection between the interior and the wider community. Focusing on planting and materiality, this experience is designed through a technique of monochrome palettes to amplify the feeling of melancholy. Black non-invasive plants replace noxious weeds, which run rampant along the creek line, while white plants draw attention to either a striking view or marginal area.

Moments are signaled along the pathways in varying configurations. Some highlight topography and signify a view. Others meet the creek and morph into seating allowing a place to reflect. Some become viewing platforms indicating a place for pause, or signify an entry point to enter a section of the cemetery. These moves offer an alternative walking experience to the historic formal avenues and create new links between the entrance and marginal spaces. Through this approach, a contemporary layer is added whilst still respecting the original masterplan. 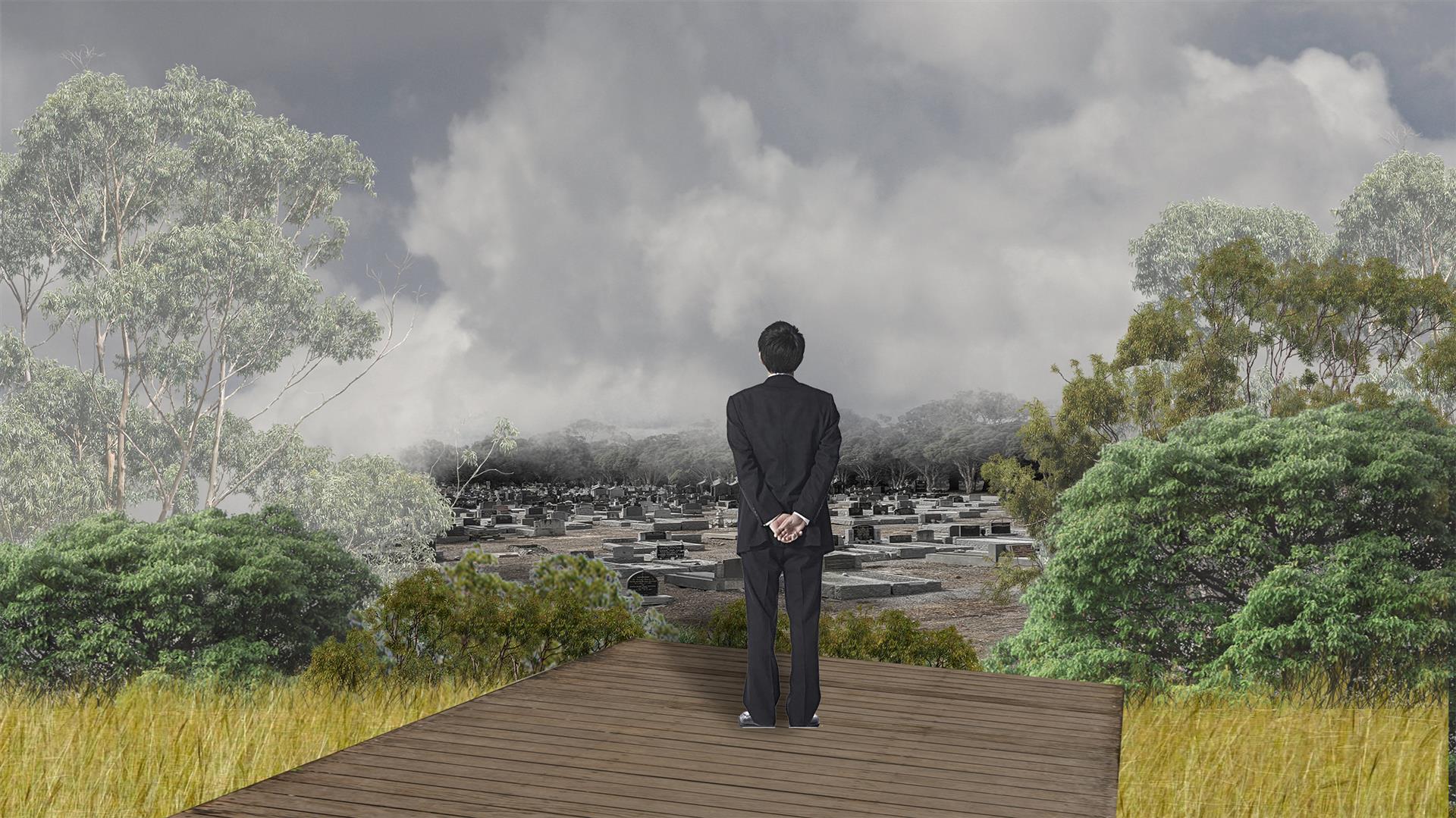 This exploration of melancholy landscapes highlighted just how often the social focus of landscape architecture is on designing places for happiness, joy, or healing. As a result, places that provoke a wider spread of emotions such as grief, sadness, anxiety, fear, and loneliness are overlooked. Currently these landscapes consist mostly of cemeteries or memorials. These types of landscapes are necessary, but we do need spaces that express a fuller spectrum of emotions. These spaces play an important role in enriching the human experience and creating a sense of belonging, especially within marginalised communities.

With the Hassell Travelling Scholarship, I will be travelling to Christchurch, New Zealand to understand how the tragedy of the 2010-2011 earthquakes affected communities, how the rebuild has been approached, and investigate how melancholy landscapes may be implemented in new areas of landscape practice as a form of community resilience. By learning to design with respect and sensitivity to the trauma suffered by communities, we can begin to acknowledge and explore how emotions such as fear, anxiety, or grief, are legitimate emotions to feel in public spaces.

Hilary Hoggett
Hilary Hoggett is the winner of the 2021 Hassell Travelling Scholarship – Robin Edmond Award. Find our more at www.hassellstudio.com.