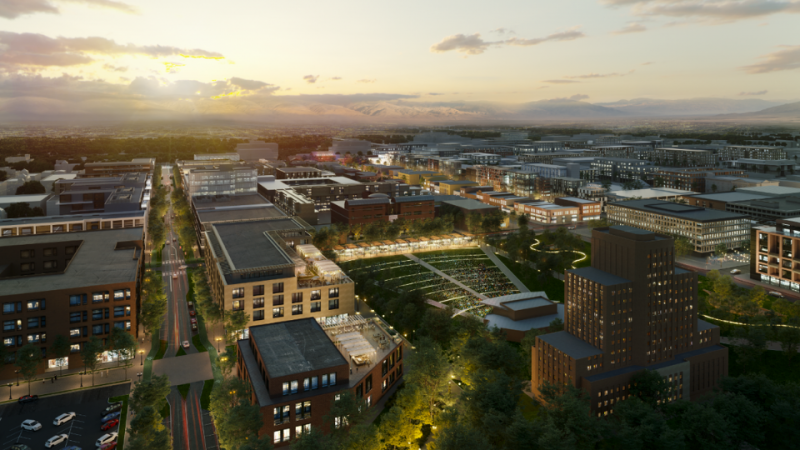 At one point it was said that all roads led through Ogden, Utah. Downtown Ogden was once the bustling center of the American West. Located just miles from the Golden Spike, where the Central Pacific and Union Pacific Railroads came together to create the first Transcontinental Railroad, the rail economy created great wealth for the residents of Ogden, with the concentration of the investment focused on the City’s Union Station at the core of Downtown. At the turn of the century automobiles dominated the west and brought on the decline of rail travel. As such by the 1950s, Downtown Ogden saw a swift decline in both its population and its economic strength. By the 1980s, blocks of formerly thriving businesses had been reduced to vacant storefronts. Downtown Ogden was a shell of its vibrant past.

Throughout the latter part of the 20th century, there were several attempts at bringing new life to this struggling Downtown. Vacant properties along Historic 25th Street – once the City’s great Downtown street – began to be redeveloped and the City used tax increment financing to incentivize development of a once vibrant indoor shopping center into an outdoor retail marketplace. But while the return of investment to Downtown helped, it did not provide the momentum that City leaders hoped it would and further redevelopment efforts stalled out. Downtown Ogden remained stuck without a plan to restore the city to its former glory. 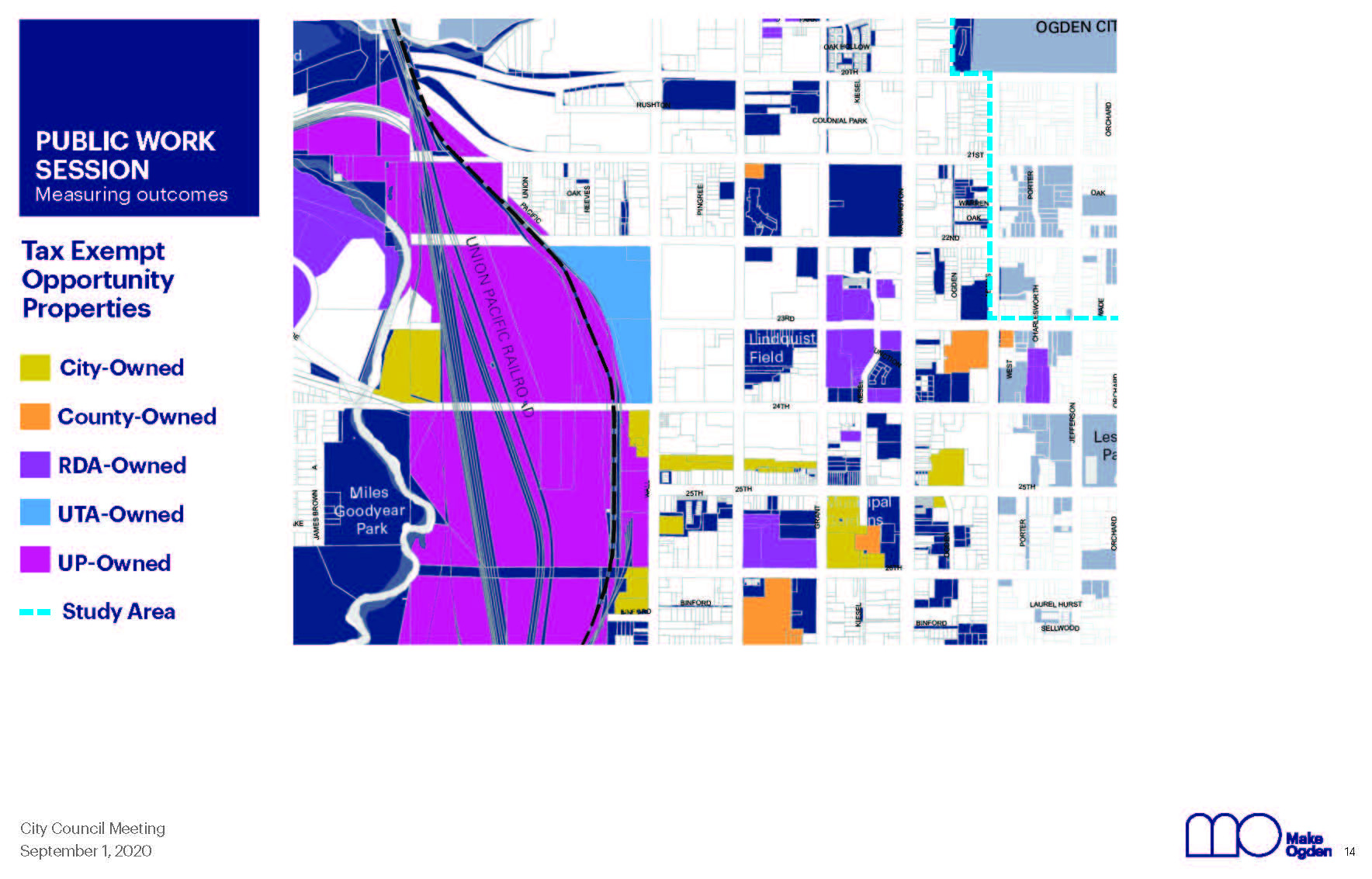 Unfortunately, struggling Midwest downtowns are not anything new. Developers typically find less restrictions and lower project costs the further away from the city center thus perpetuating the reliance on automobiles. With this loss of vibrancy and commerce so goes the City’s ability to fund capital improvements, essential and social services through the collection of property tax and sales tax revenues. This shortfall was growing exponentially each year. While people were no longer visiting downtown the rest of Ogden was booming. In 2017 Forbes named Ogden-Clearfield area to their top 15 fastest growing US cities. In 2018, City officials took a hard look at their fiscal situation and recognized a dire situation: without substantial increases in revenue, assuming a steady population increase, by 2035 the City could see a $10 billion dollar gap between revenue and the General Fund, leading to potential cuts to city services that could decimate the community. And because a large majority of revenue is from property taxes, the only way out of this dilemma was to create more property tax revenue. But how? 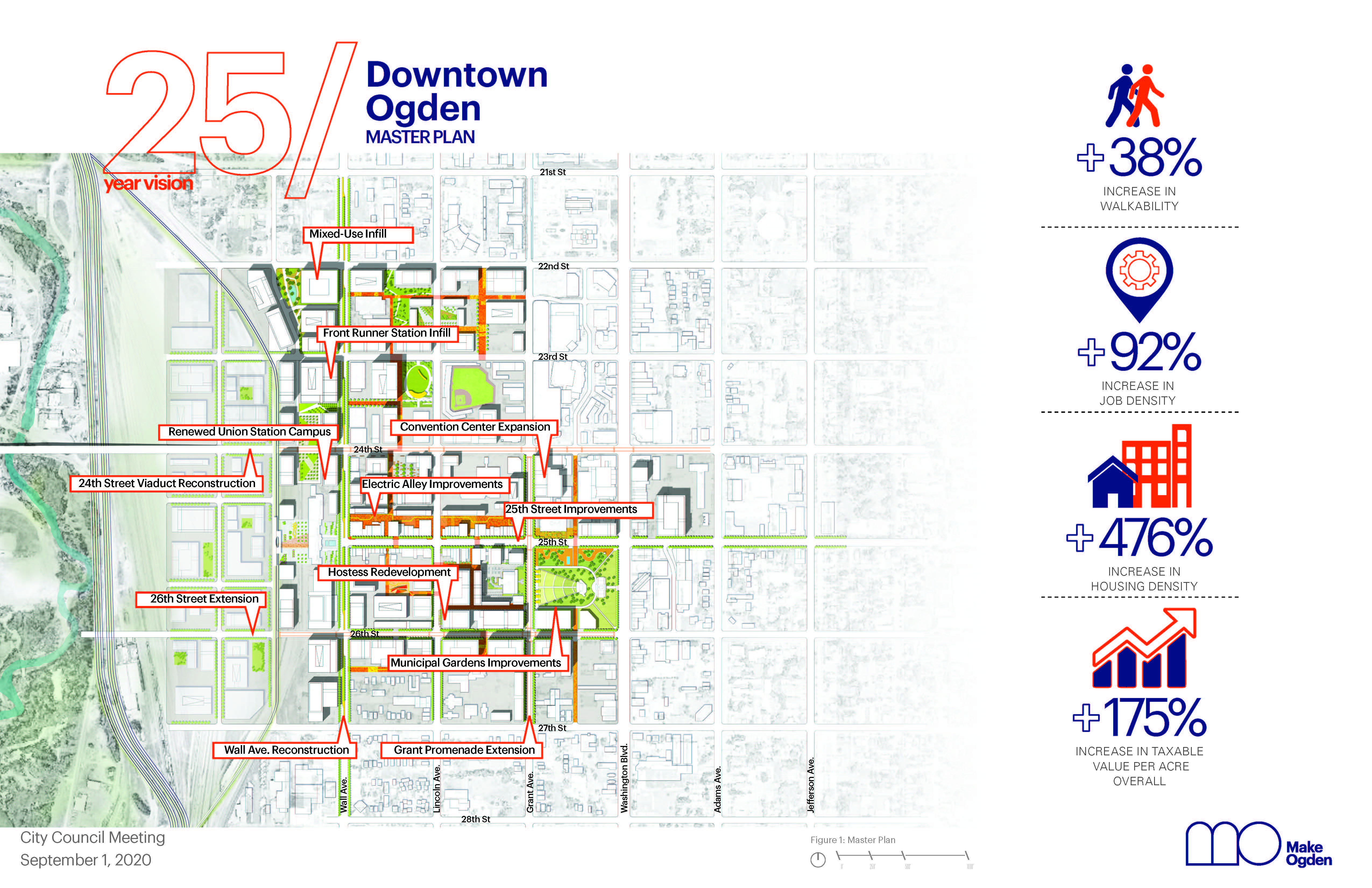 The Downtown Ogden Master Plan was developed to tackle this dilemma and find a fiscal path forward for the city while also returning Downtown Ogden to its vibrant past. Our team was hired to solve for an economic dilemma,  but we knew the only way to do this is by creating a complete community. At the outset of the project we relied heavily on our internal Strategic Services group who poured over the City’s revenue structure and identified the real estate problem facing the city – nearly 40% of properties located downtown provided little to no revenue to the City. Lands owned by the City, County, State, and railroads effectively placed a cap on the ability of the City to collect property tax revenues. The Downtown Ogden Master Plan focusses on repositioning a large portion of these properties to the tax roll through redevelopment, providing a significant increase in revenue. Through a robust engagement process that sought out business owners, developers, social services providers and local residents, the plan focused on an episodic approach to solving this dilemma – one that builds on existing downtown assets and public-private partnerships to realize exponential change across each planning episode. 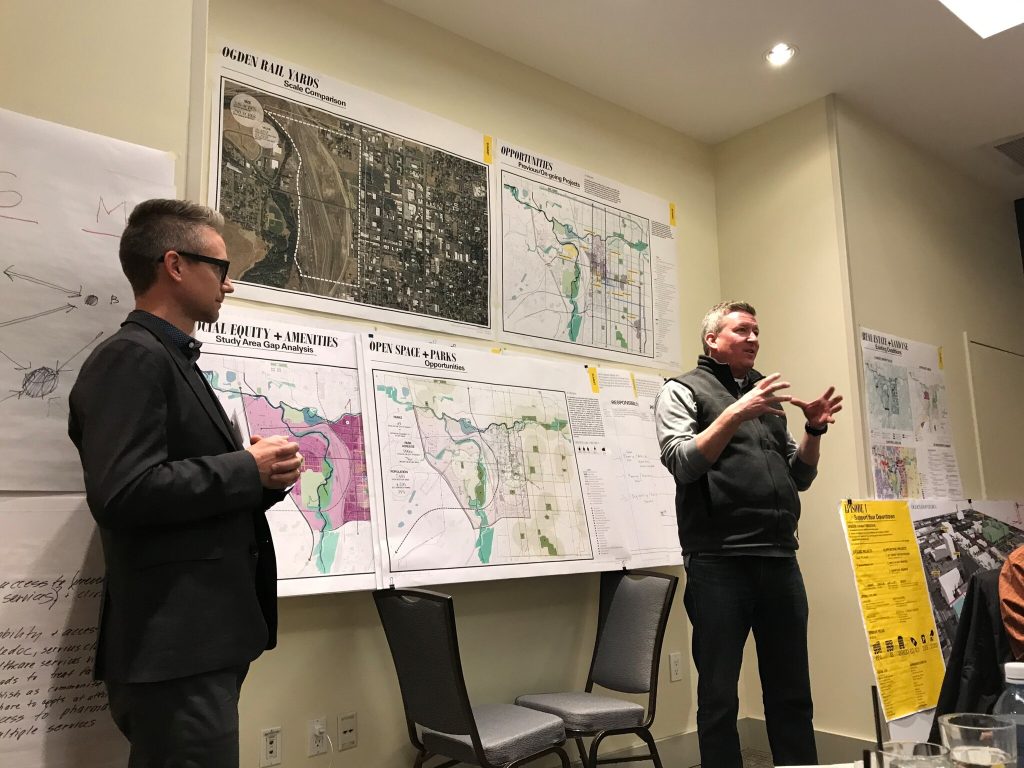 Today Ogden is one of Utah’s most diverse cities with over 20% of the population from a minority ethnic group. For sustainable growth, the plan must come from the community and be for the community. While economic growth was a clear goal of the City, the community was concerned with the potential that with this growth and reinvestment would bring further gentrification of the Downtown community. To balance these two potentially competing challenges, our team utilized smart growth strategies to combat displacement and provide opportunity for people to not only stay in place but thrive. Smart growth strategies are tied closely to recommended redevelopment strategies – setting expectations across each planning episodes for such things as the provision of attainable of housing, expansion of community and social services, availability of transit and mobility alternatives, among other things. The City is committed to this framework with the hope that it will “lift all ships” and lead to an economically, socially and equitably vibrant Downtown in the future. 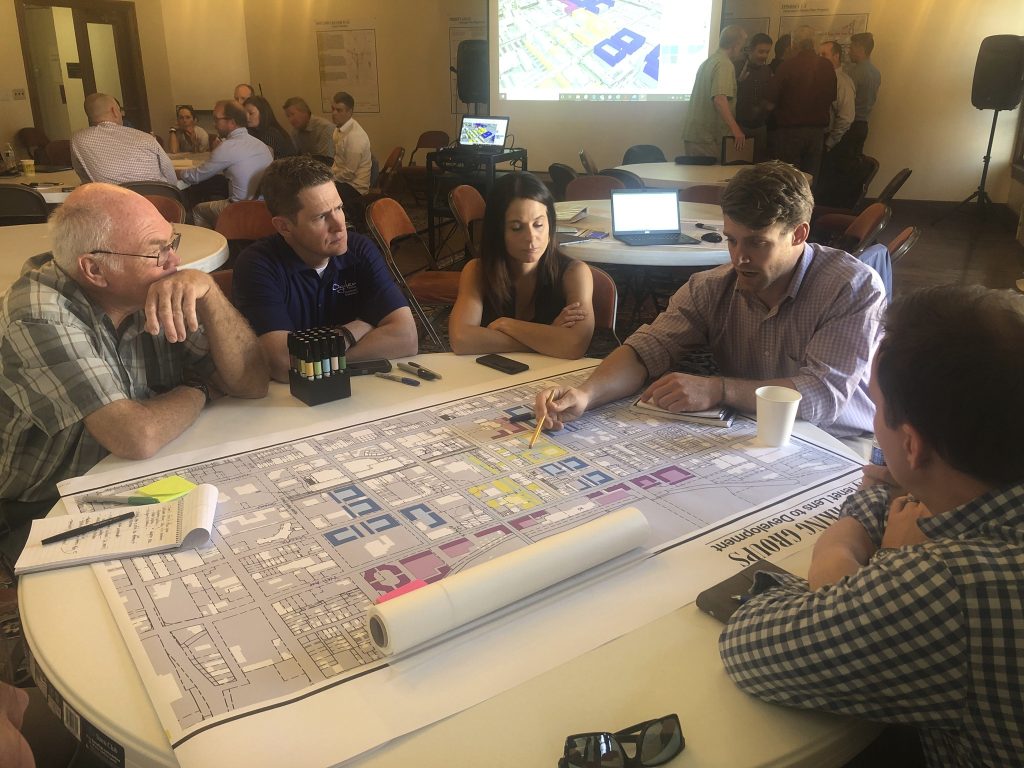 While catalytic and sustainable growth may be the goal, achieving this in a place that is rich in existing architectural charm and character is something that requires careful planning. The community was aligned behind the idea of preserving the historic charm and architectural integrity of the Downtown. To address this, our team worked closely with City planning staff to develop design standards for the Downtown core that established clear directives for materials, scale and cadence of building depending on location or use. The design standards strike a balance that protects architectural and urban design character while ensuring that all projects are designed of their own era and contribute to a common sense of place. 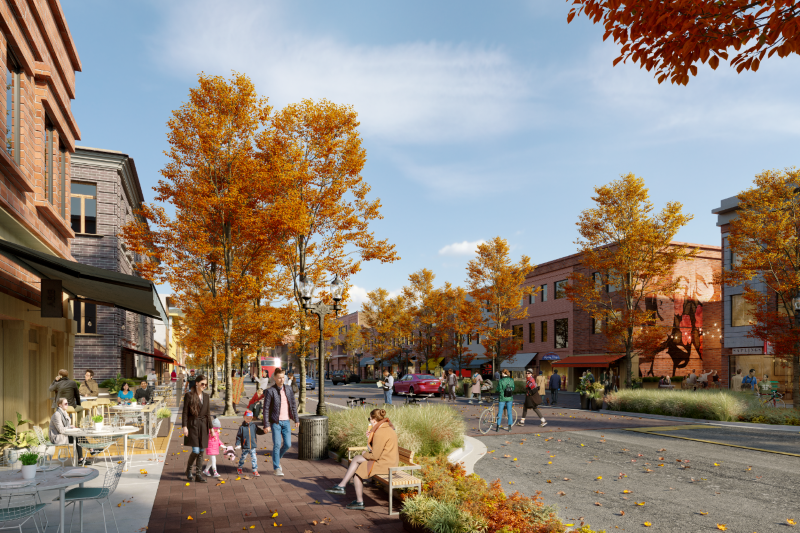 Downtown Ogden is one of the last vestiges in Utah that can provide residents and visitors alike with an authentic experience tied to its history while anchored in today’s creative and eclectic soul. In today’s experience economy are searching for authentic places. This authenticity cannot be fabricated. By developing plans and policies that thoughtfully catalyze redevelopment while supporting the needs of the diverse community, the city can plan for the future while avoiding an economic crisis. The Downtown Ogden Master Plan memorializes the legacy that City leaders wish to leave for future generations – one of fiscal health, social wellness, and diversity and equity.

Robb Berg
Robb Berg, landscape architect with Design Workshop, is known for the high value he places on individuals and teams. From partnerships with communities and clients, to collaboration with design teams, to mentorship of young professionals, Robb leads through respect and trust. He optimizes teamwork, keeping a focus on the distinct needs and opportunities of each project.