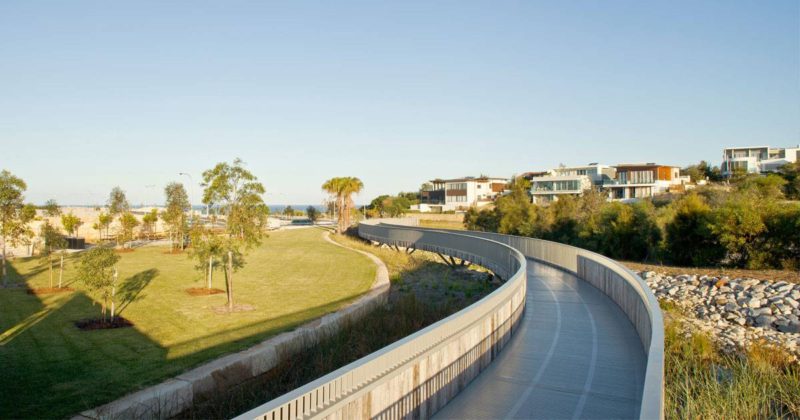 Article by Gwgw Kalligiannaki – Little Bay Cove, by McGregor Coxall, in Little Bay, Sydney, Australia. Designed with the principles of “urban ecology”, the Little Bay Cove is an excellent example in which “the experience of the landscape has been carefully considered to support a diversity of spaces that provide a range of amenity”, as McGregor Coxall says of his project. His proposal is based on a grid, where housing typologies are placed. A water-sensitive design basis is incorporated into the central ecological corridor and public park, but also the streets themselves. 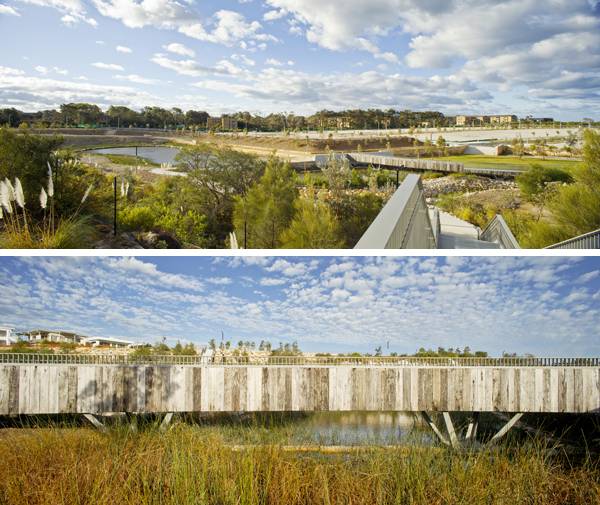 Coxall’s design is based on reuse of the site’s materials and local plants, to ensure absolute sensitivity towards the local topography. As landscape architects analyze, plan, design, manage, and nurture the built and natural environments, they work to create outdoor places, in order to maintaining the balance between the built and natural environment in our cities. They design innovative spaces and improve environmental quality in order to produce “human spaces”. Many landscape projects are influenced by the key points of “urban ecology”; providing spaces designed to respect and highlight the locality of the landscape, inculding “social, environmental, and ecological systems”. 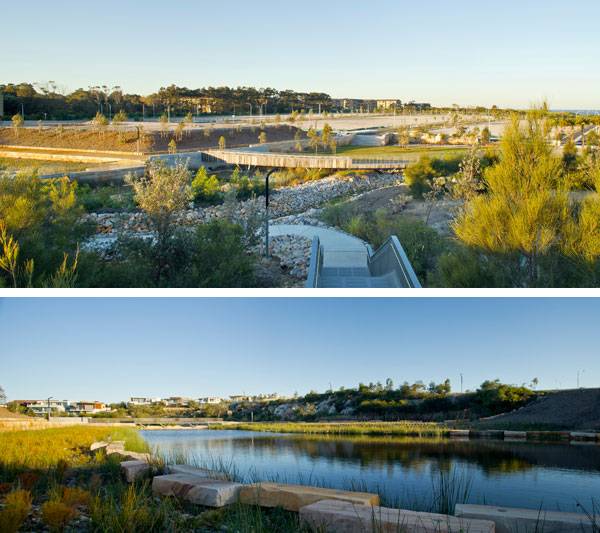 As the former buildings and services, as the UNSW sports fields or the UNSW Biological Resources Center, were scattered across the site, the design team decided to demolish all existing buildings, and redesign the landscape. The new master plan includes two public parks, the Urban Lounge and the Brand Park. The streets are organized according to the Water Sensitive Urban Design principles. Also, all the pedestrian connections around the site were enhanced to connect the new master plan to the existing city grid. 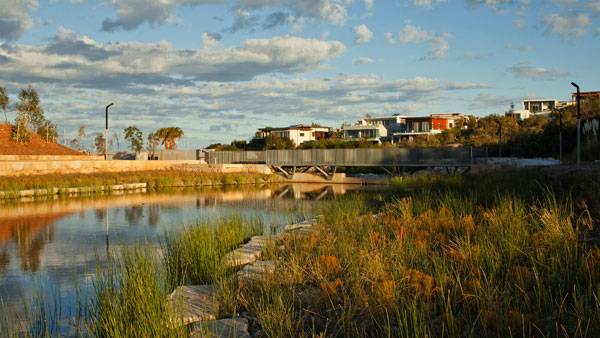 Coxall’s design is based on three main principles; water sensitive design, endemic plant material use, and ecologically responsible design. Paying attention to those principles, the design strategy is based on rigorous site analysis with Australian standards and codes. Also, the brief indicates a stormwater system to detain and clean stormwater. 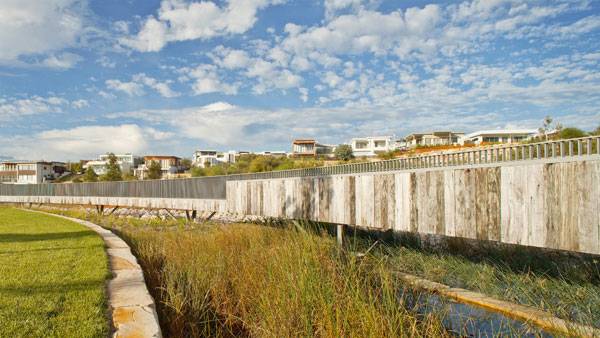 The idea is to lower the landscape strip down to the level of the road, in order to use stormwater for irrigation. Porous materials, like EcoPave, or the establishment of roadside swales used to gather rain for the gardens. The bio-retention swale in Urban Lounge is also used as part of Water Sensitive Urban Design. 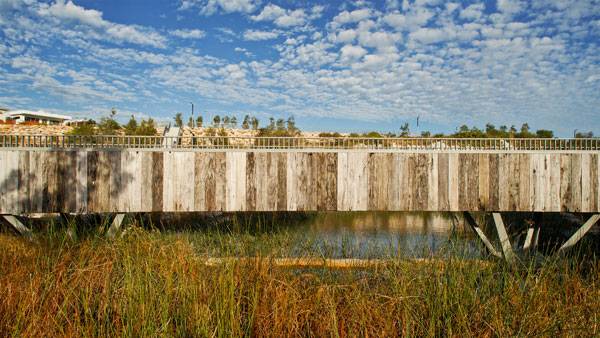 Public parklands were designed for recreation and stormwater initiatives, such as Urban Lounge and Palaeo Valley with Brand Park. Public domain will be the key to produce a healthy, extroverted community, and so the architect provides a range of spaces such as a BBQ corner and a toddler playground. 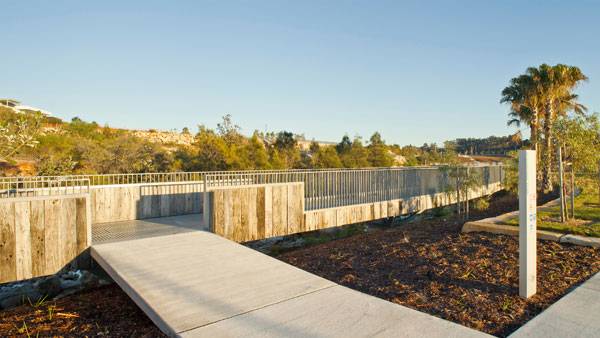 Wandering in the Landscape

The pedestrian network was formed to connect the site with the city, but also to give space for walking, jogging and play areas. The snake-form steel bridge, the steel stairways and weir-top bridge provide pedestrian access across the site bringing guests close to all of the site’s spaces, even over the water. 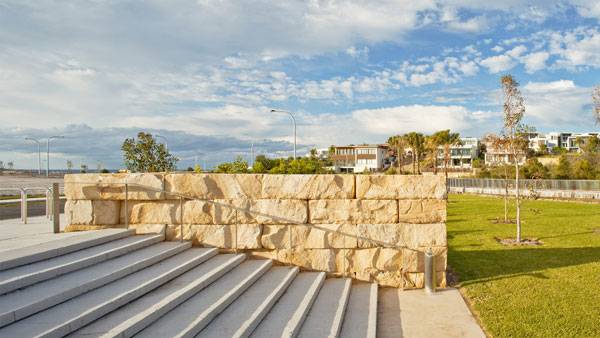 In order to have a connection to the sea, the design also engages views over the ocean and across the site, through viewing platforms and locations. Another important issue in designing public space is safety. On this point, Little Bay Cove’s masterplan deals with safety through vibrant areas using environmental design initiatives. 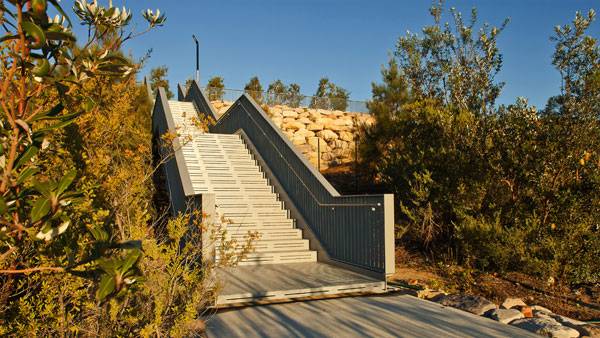 Unlike the former buildings, Coxall proposed to retain and protect the Eastern Suburbs Banksia Scrub and the Miocene and Ochre deposits. Interpretive signage was provided to inform the guests about the history of the site, the Eastern Suburbs Banksia Scrub and the Miocene. It is really important when we redesign spaces that have some history, to keep former elements that show the previous character of the site and its connection to the present. Coxall promoted the using of salvaged and recycled materials in the site’s areas, reinforcing that remnants are not treated only as historical evidence, but can also used in the context of eco-design. 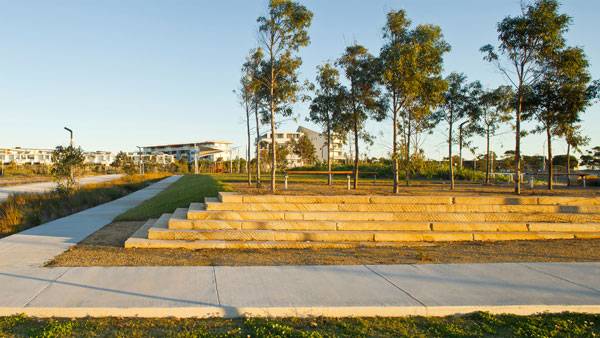 A strong gesture from the architect is the use of native plants on the site. The indigenous planting limits help the new design to relink to the existing topography, and link the site to the remnant patch of the Eastern Suburbs Banksia Scrub. In Coxall’s design, planting is used to promote privacy between the site and the “neighbors”, but also to create shade areas. The Casuarina planting on the northern boundary was also retained and reinforced with native plants. The re-generation of the Central Corridor is used to foster the creation of native ecosystems and promote urban biodiversity. A lot of the existing native trees were retained within the “urban ecology”. This new design gives Little Bay Cove a new, vital character as a public space, which provides communication between the users. 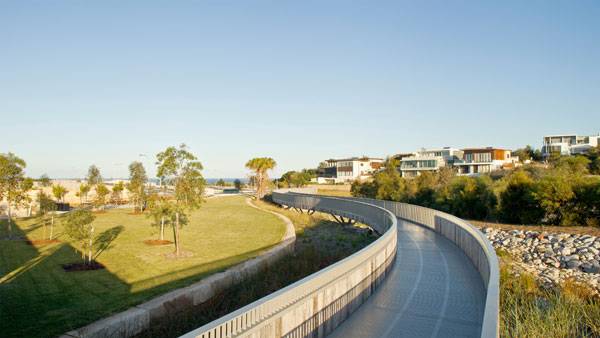 Designing with ecology strategies, Coxall created an eco-friendly public space, using existing and local flora with stormwater irrigation systems. Also, as the new masterplan reformed the landscape, all the important remnants were retained, protected, and respected as a history of the site. What principles do you define as ecologically responsible design? 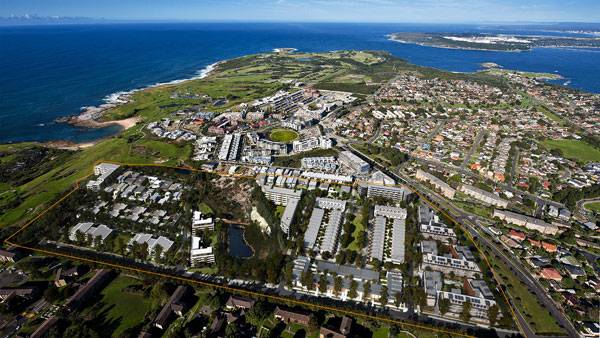