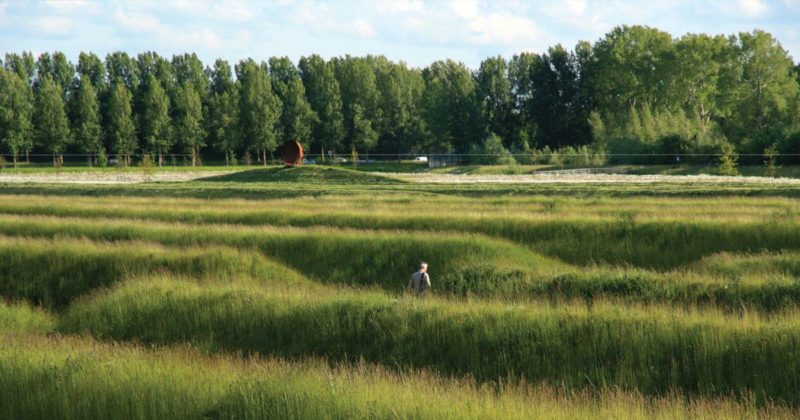 Article by Amrita Slatch – Land Art Park Buitenschot, by H+N+S Landscape Architects, in Hoofddorp, the Netherlands When you land at Amsterdam’s Schiphol Airport, you might not notice the 80-acre, diamond-shaped green space right next to one of the runways. But that’s OK. That is not the purpose of this green space. Instead, it is meant to solve one of the most basic issues faced by residential areas near airports: ground noise. The idea to deflect low-frequency noise caused by aircraft taking off from one of the busiest airports in the world is an amazing attempt at using the nature of plants to absorb sound. It’s a project that doesn’t just aim to beautify the open space with landscaping, but to technically mold the space to solve a much bigger problem. Let’s learn how H+N+S Landscape Architects managed to pull of this multidisciplinary project. 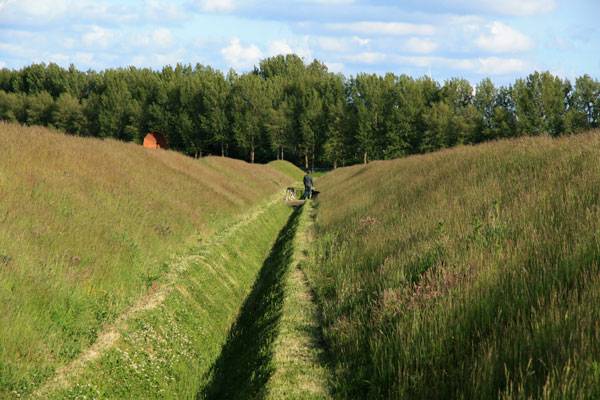 After the airport’s fifth runway (Polderbaan) was built, the ground noise near the adjacent residential area of Hoofddorp increased to such an extent that mitigating measures were required. Over the span of some time, residents noticed that the ground noise was largely reduced when farmlands were plowed. This became a gateway into understanding and researching noise-reducing landscape. 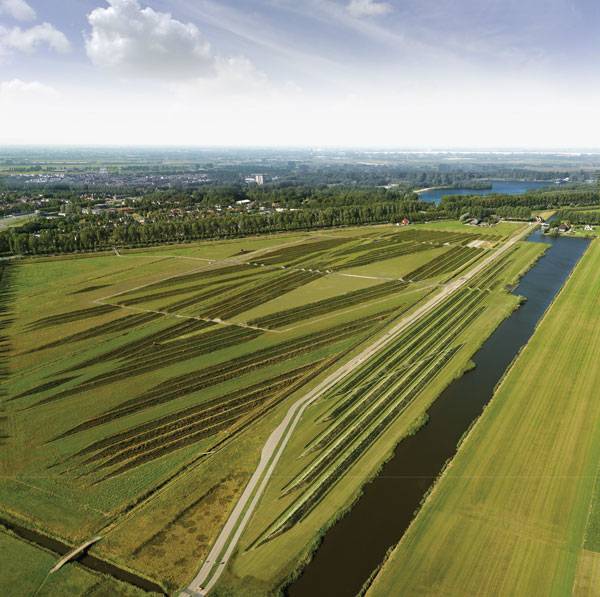 The undulations formed on farmlands after plowing helped in sound dispersion, which further helped reduce noise. After understanding this, a team of people — including H+N+S, visual artist Paul de Kort, TNO (a noise-reduction technology company) and Witteveen + Bos (cost calculation and feasibility) — conceptualized the idea of a ridged landscape near the runway. Under the supervision of the Government Service for Sustainable Rural Development, Mainport and Groen Foundation, and Amsterdam Schiphol Airport, a maze-like park was designed, drawing from the 17th-century experiments in acoustics by German scientist Ernst Chladni, known as the “father of acoustics.” 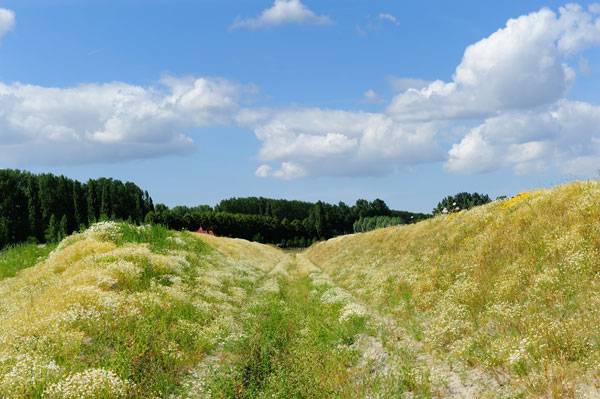 The Landscape that Diminishes Noise

Having realized the importance of ridges and how they help in deflecting noise, the team designed three-meter-high embankments that were carved onto the land surface. It is important to recognize that the three-meter value was generated after a lot of measurement and calculations on how oblique planes help to distort and disperse ground noise. 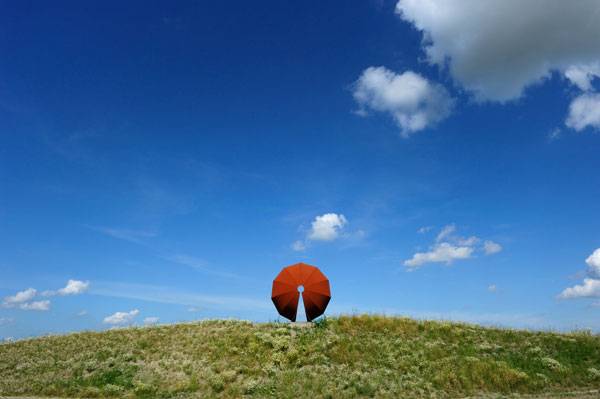 These embankments move along the length and breadth of the site (500 meters by 100 meters), placed very close to each other and perpendicular to the direction of the sound waves (for optimal sound reduction), forming a diamond pattern. This specific pattern forms a very interesting relationship with the orderly grid of Hoofddorp’s urban fabric. The embankments, which rise into the shape of a pyramid, have a rather interesting noise-amplifying element placed atop them. These noise-amplifying elements are parabolic sound mirrors — also called “listening ears” — that help to amplify the ground noise for whoever stands on them. 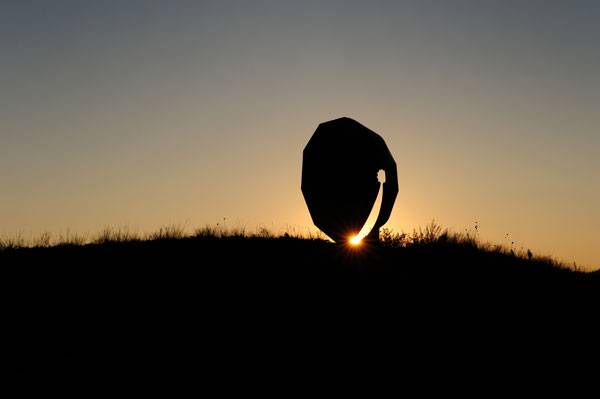 The Landscape that Stimulates Wandering, Fun, and Recreation

The beauty of this project lies in the fact that the embankments are designed so that they very seamlessly blend into the existing landscape. The reason for this is that the in-between spaces between two raised embankments have been converted into one-meter-wide walkways. 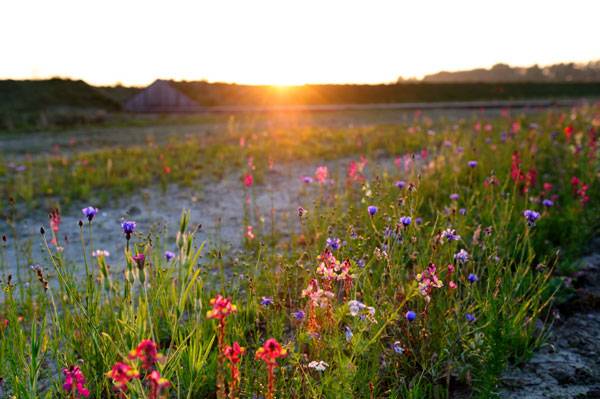 These intermingling pathways and bikeways invite nearby residents to enjoy a nice walk or ride amidst the wilderness that is a creation of the great planting strategy. The spatial vistas of the site, which are framed within the three-meter-high embankments adorned with grasslands and sedges, help form big and small spaces. These spaces then manifest into sports fields, long fields for walks and rides, and small intimate spaces. It would be appropriate to say that the landscape has very effortlessly catered to the needs of the nearby residents by not making noise reduction their only objective. 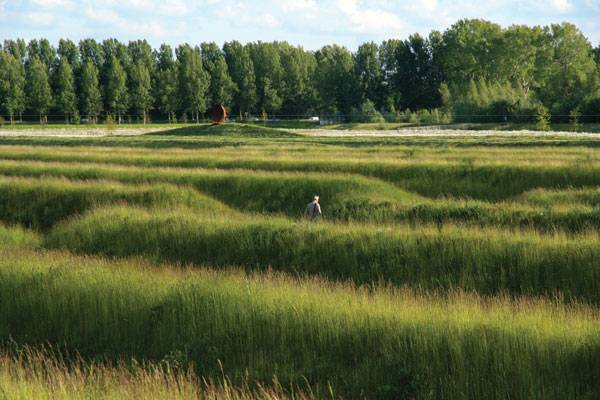 Something Much More than Just Land Art

A land art project — and at the same time Europe’s largest maze — has singlehandedly integrated the disciplines of landscape architecture and acoustic technology. According to the Works that Work, the park reduces the ground noise by two to three decibels. Although that is less than what was expected, which was eight to 10 decibels, the Amsterdam Schiphol Airport hopes to work on that in the future. Looking at Land Art Park Buitenschot as an example, the Melbourne Airport and London’s Gatwick Airport are adopting similar measures as natural ways to curb ground noise. A form that was agriculturally inspired seems to have been able to answer the questions regarding noise reduction and recreation. The result of Land Art Park Buitenschot is a multidisciplinary project that has made the residents of Hoofddorp less burdened by ground noise and able to live a more comfortable life. Have the designers been successful in their efforts to solve the noise pollution problem? Do you think this type of work can achieve more positive results? Should such noise-reducing landscapes be made compulsory near airports? Answer with your comments below.