Hjorthagen Entrance Square, by Nivå Landskapsarkitektur AB, in Stockholm, Sweden. Spaces of movement such as streets, sidewalks, bridges, train stations and entrance squares are often put in a category of secondary relevance by us, in contrast to the spaces of lingering around, for example parks, squares and gardens etc. They are almost never a destination point; they are rather places that we use as transit to reach our targeted location. Hence, to a landscape architect, designing spaces of transition requires him or her to embody the movement itself, like a dancer or an athlete studies every move of their choreography, and to be able to transform this simple moving experience of the pedestrian to more than just a transition. 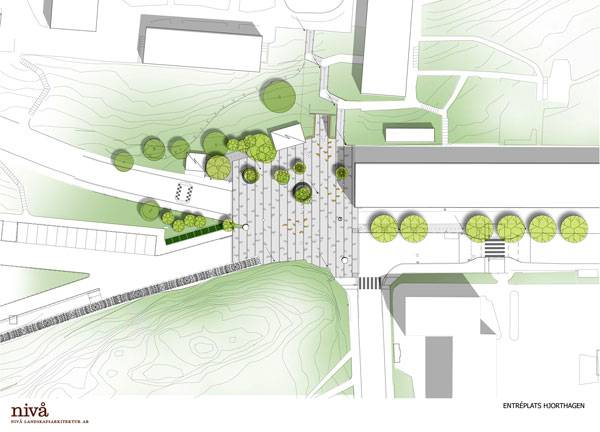 Hjorthagen square represents a successful example of transforming a simple passing road and small seating area to a square that people can linger in and enjoy instead. This square, located at the entrance of Ropsten subway station in Hjorthagen, Stockholm, has gained increased importance since a large brownfield redevelopment project began to take place in the surrounding area of Norra Djurgårdsstaden. A significant space of movement, enjoyment and connection to the newly developed neighborhood, existing residential blocks and new cultural center is what, the designers aimed at creating. 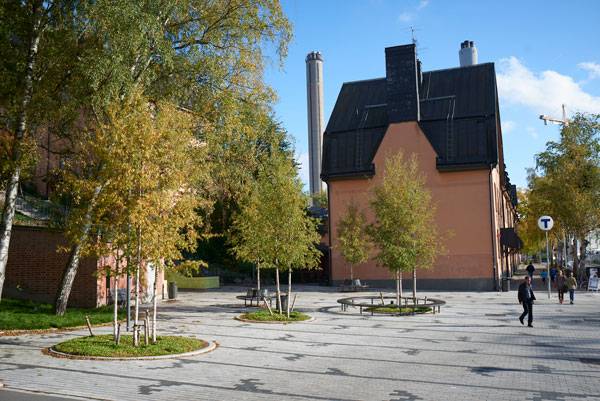 Melting Into The Surrounding Landscape

The best landscape designs are the ones that make the site at hand look like a fitting piece of a puzzle (being the larger space), integrating the site well into its urban or rural context. The projects’ designer, Nivå Landskapsarkitektur office, put the successful integration of the square as a top priority and it was a part of their main concept. The “strong nature lyric”, as what the designers called, is the projects’ central theme. The surrounding birch trees and the large moss-covered hills were, thus, an important inspiration for the sites’ composition, and hardscape and softscape elements. See More Projects in Sweden: 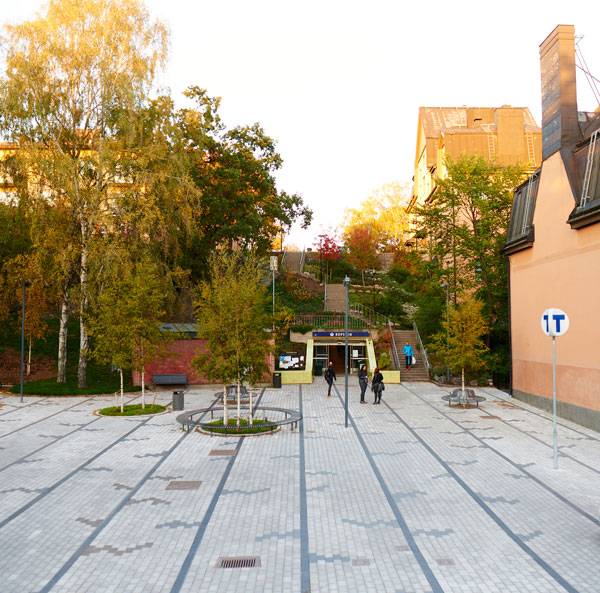 Nature And Movement in The Paving

The square was paved entirely to make it pedestrian-friendly, for it would be illogical to create flooring that slows down the ones hurrying to take the public transit! The selected pavement is smooth enough for quick walking, yet interesting enough to contemplate. The landscape architects chose a pixilated-like stone paving. This pixilated pattern creates an essence of movement, and the different black and white patterns were inspired from the birch stems. The distinct graphic expression of the paving ties the square together and creates a cohesive entity. 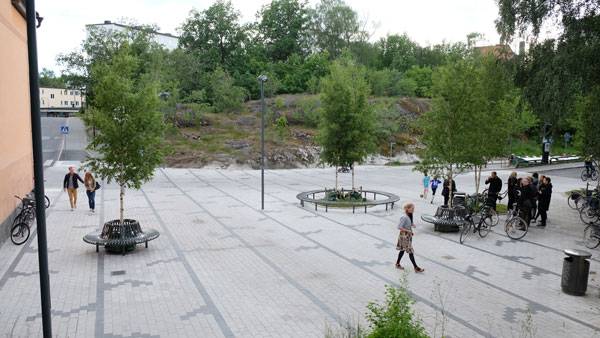 The Magic of The Seasons

Groups of Ornäs birches are one of the focal elements of the square. The choice of the trees was made to keep the place in tune with the surrounding birch trees. Some of the planted trees are encircled by round steel benches of various sizes, while others are planted amid a circle of low green vegetation inspired by the mossy hills. A combination of both elements is present as well. 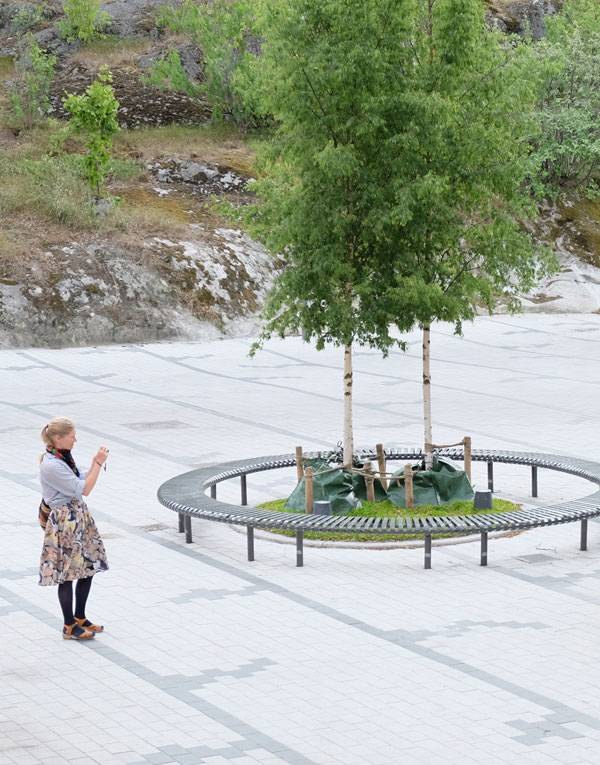 Birches animate the square in all seasons. In spring and summer, their green matches the color of the hills around, giving a strong contrast to the greyish paving. The strong autumn foliage is “inspired by the old yellow buildings flanking the square”. And, in winter, the snow-covered stems look simply enchanting.

In order to facilitate the movement of pedestrians to the station, back lit yellow steel screens were used to emphasize the subway entrance as its location makes it slightly hard to find. These screens are not alien but harmonious to the rest of the design: “The screens are perforated in a round pattern, picking up the round idiom of the planters and benches on the square”, said the designers. Additionally, the wall of one of the buildings bordering the square is decorated with a cut-out gobo light projection illustrating three grazing dears. This last attraction highlights the concept of the square being the “nature lyric”. 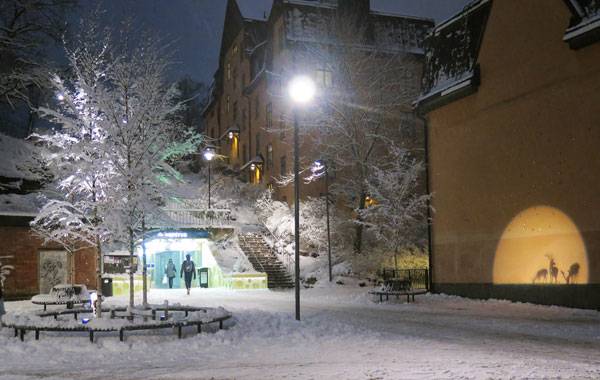 The entrance of the square is, overall, quite inviting and pleasing to the eye, creating a sense of fineness. The ease in the circulation is attained through the simplicity of the design features, the smoothness of the paving as well as maintaining all the elements at one level. Hjorthagen square is, therefore, easily accessible for everyone including people with physical disabilities. 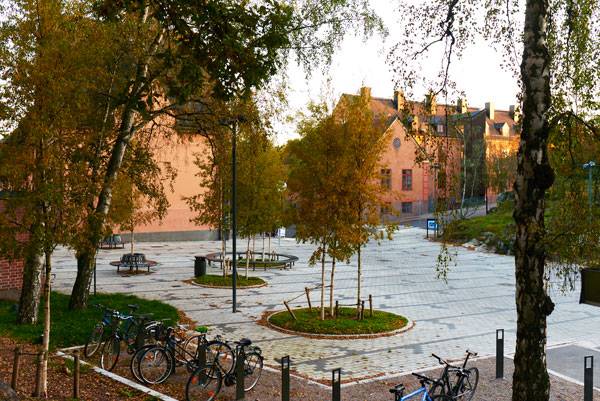 A site that can attract people to notice it and spend time in it, needs to be accessible, be of intriguing aesthetical nature, include seating, of course, be central to a cultural or economic hub, and be equipped for nocturnal human activity. Hjorthagen square provides pretty much all of these elements. Most importantly, the simplicity of the design maintains an important message about the site and that is, that this square is not too fancy for anyone and therefore, welcoming for people from all classes. All in all, the design is an effective composition that makes the entire space move with the sound of birch foliage playing with the wind, dance of light and shadows, and dance of color and movement. Leave a Comment 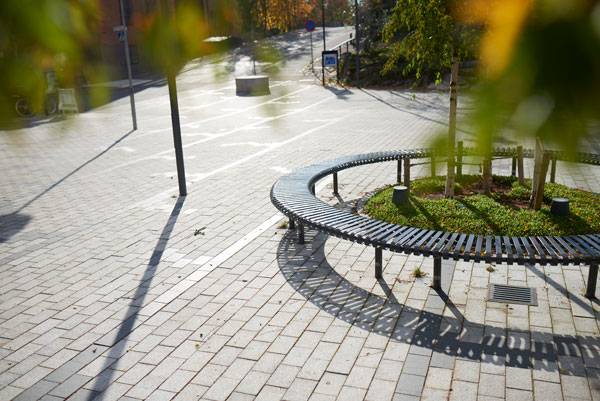