Sandgrund Park, by Thorbjörn Andersson, in Karlstad, Sweden. “Water is the driving force of all nature.” Never has this statement by Leonardo Da Vinci (1452-1519) rung truer for us than in recognizing the sheer impact Thorbjörn Andersson Landscape Architects have made on one dramatic landscape in a place that is suspended between land and water. Sandgrund Park in Karlstad, Sweden, is situated on a sandy peninsula that flows into the Klar River. The driving force behind the different aspects of the park is one’s physical closeness to water — and ultimately to its meditatively calm to raging aspects. The park exemplifies a project that takes full advantage of the abundance of opportunities created by the location and creatively plays on the magical attraction we have with one of the strongest and most irrepressible forces of nature. 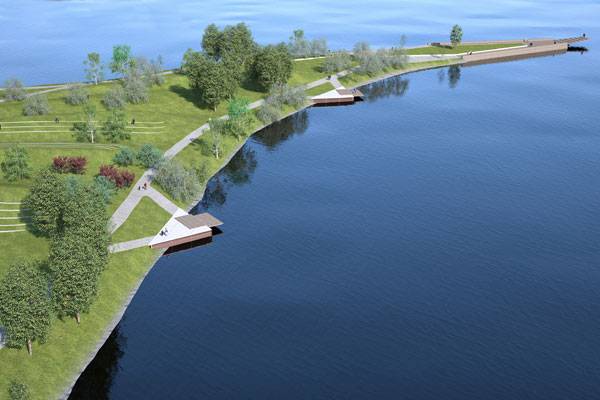 The peninsula has always been a dramatic place, but one with a lost sense of purpose. Prior to the construction of the park, there was no sense of arrival. Taking advantage of the site starts with the story of the Klar River: The river has its source in the Scandinavian Mountain ranges on the border of Sweden and Norway and ends in Lake Vanern, the largest lake in Sweden. While upstream, it enters the Karlstad region and splits into two main parts and eight smaller parts. At the point where it separates, the 300-meter-long peninsula where the park now stands is formed. The powerful physique of the peninsula is further dramatized from the air, resembling a bird’s pointed beak. 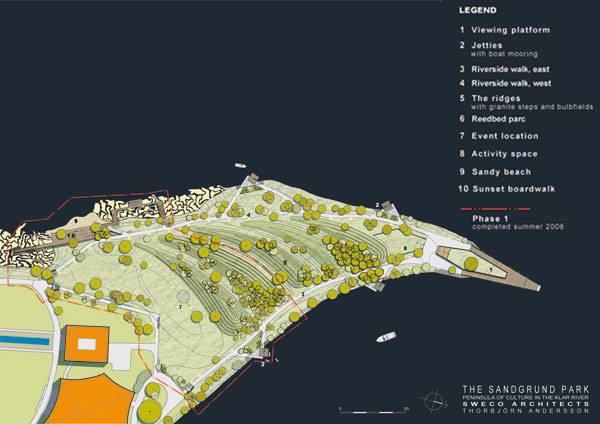 Another existing feature is the Vermland Museum, designed by Swedish architect Cyrillus Johansson in 1927. It is located at the base of the peninsula and sits on the axis of the city’s main street, opposite a railway station. When it was first built, the museum was situated on the river’s shore. Over the passing years, fluvial sand deposits have built up to result in today’s peninsula. 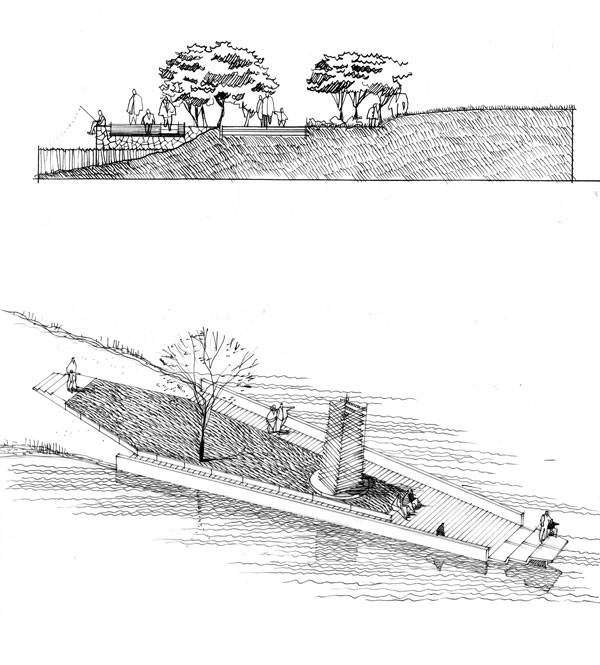 The city’s central axis hence has been extended from the train station, through the museum, and into the Sandgrund Park peninsula, finally dissolving into an almost infinite river view. As the design team points out: “While the museum is a collection of the world, the train station collects the world.” 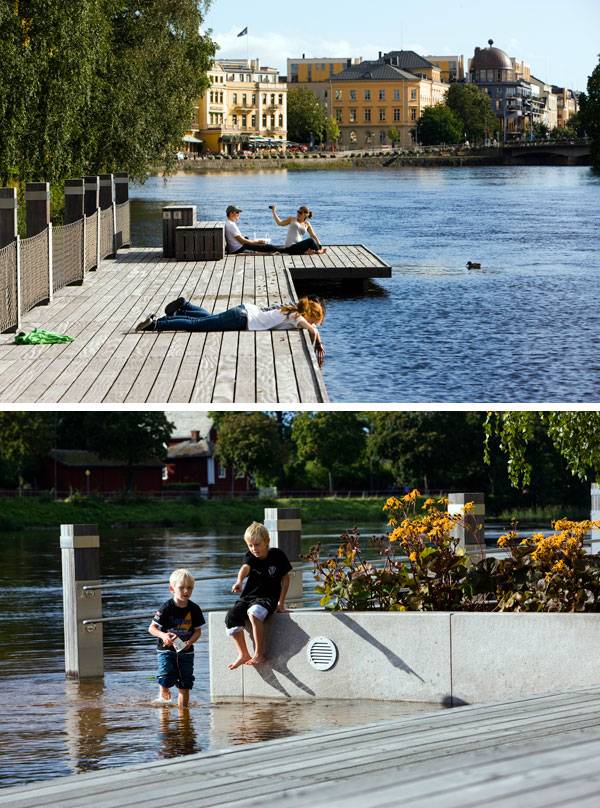 Working With The Nature, to Create an Exceptional Space and Experience

Conceptually, the park and the river represent the dramatic yet calming endpoint to the possibilities of travel that exist within the city and from the train station. The designers were able to work with the river, the sand, the abundant space of the peninsula, and the close proximity to the city’s center to use the presented resources wisely, amplifying the existing qualities for the future park. 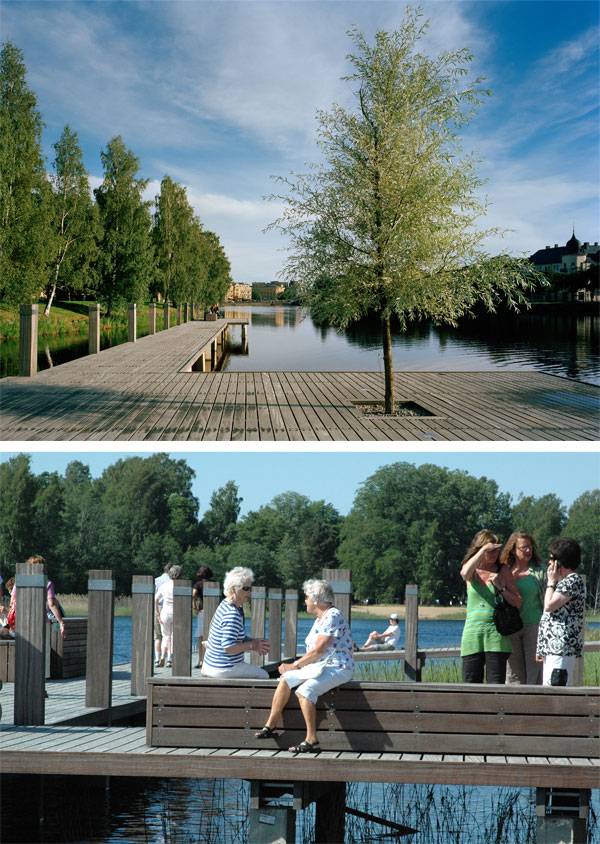 Just Because You Can’t Swim in it, Doesn’t Mean You Can’t Enjoy it

With the currents being too strong and the water being too cold, the resulting design is not made for physical contact with water, such as swimming. Therefore, the landscape architects wanted to create a place that can be seen and enjoyed in all seasons. The element of water is highlighted by comfortable wooden walkway surfaces. A boardwalk system extends along the western shore, facing the sunset with plenty of space for social opportunities. Four triangular viewpoints in the form of jetties protrude over the river for a pause.

Main Features of The Park

The scenic dramatic tip of the peninsula’s profile was given a sharper profile by adding a 40-meter-long viewing platform with a springboard-like viewing feature at the tip that really maximizes on the pause-and-reflect opportunity this location provides. Other features of the park include a sandy beach and a reedbed walk on the western shore, activity space near the peninsula’s tip, and an event location close to the base of the peninsula. 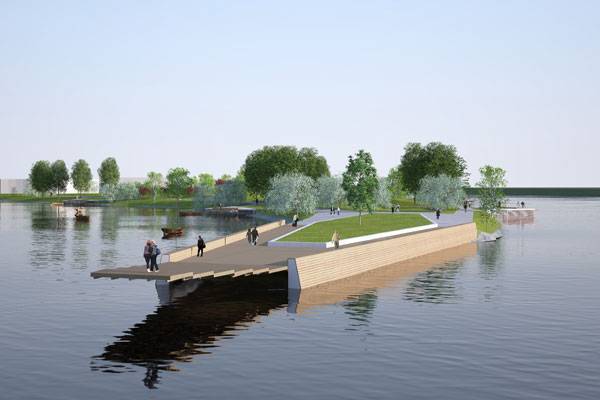 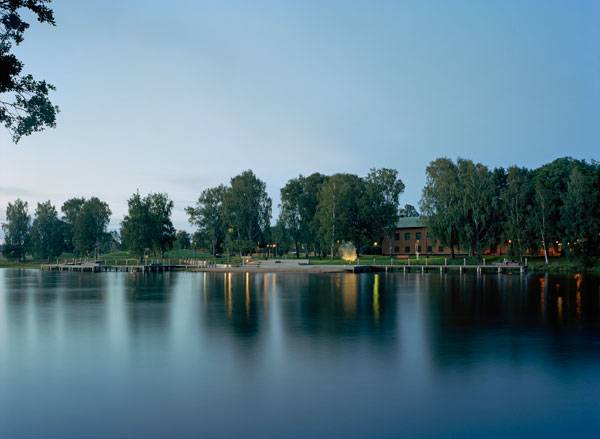 In the center of the interconnecting riverside paths to the east and west, an undulating terrain with five parallel ridges manipulates the grounds. Their sizes vary, with the longest ridge being 100 meters long and six meters high, gradually dropping lower. The spatial concept behind the ridges was to break up the view along the peninsula’s length and to open up views to the sides. This, no doubt, dramatizes the width of the peninsula. 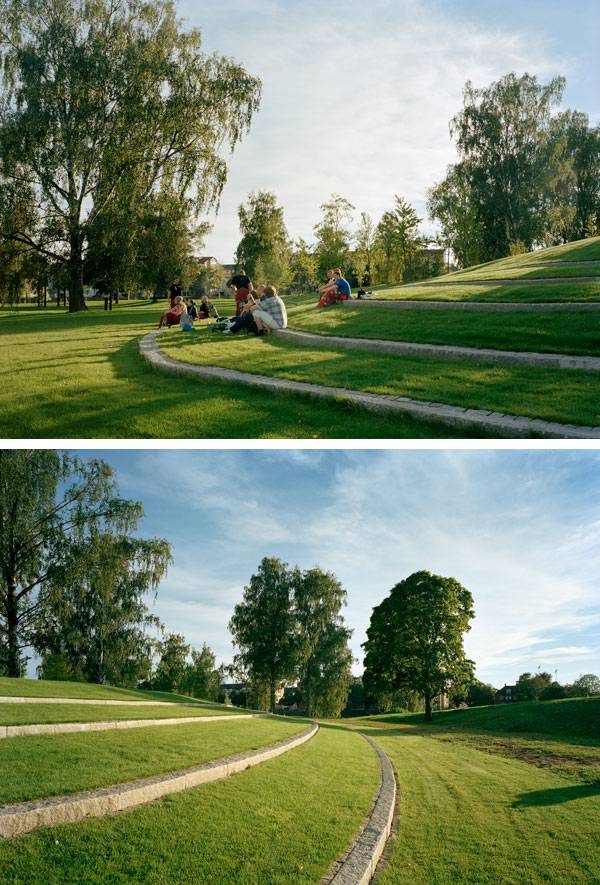 The ridges form closed valleys in between and each valley has a distinct plant habitat of a beech forest, a magnolia grove, or a fern valley. The ones in between are grounds for rest and play, with contour lines deliberately marked with low granite steps, grass, and bulb fields. 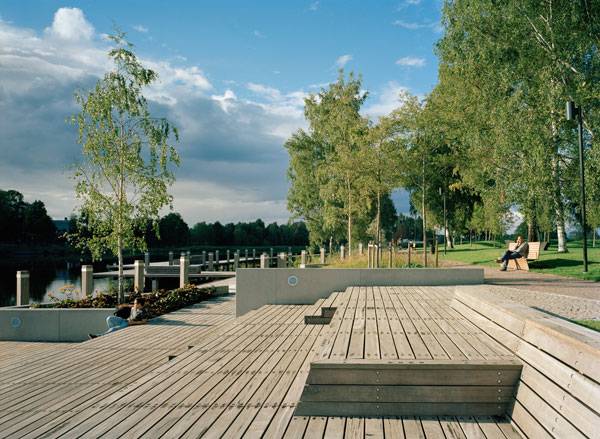 In many cases in our day-to-day lives, we have to dive in and fully immerse ourselves in our daily activities — often headfirst. What a place such as Sandgrund Park allows for is a certain place of stability — a place where users can come to enjoy the “grandeur of the surrounding landscape,” as the designers call it, to gaze out to the river, to observe the variations of the four seasons, and to reflect for a brief moment on what is designed to be an enchanting end point of the city. One cannot travel beyond this point, so it only makes sense to stop for a brief moment and experience the force of nature and the abundance of life that exists, thanks to the creative intervention within a piece of land bounded on most sides by water. 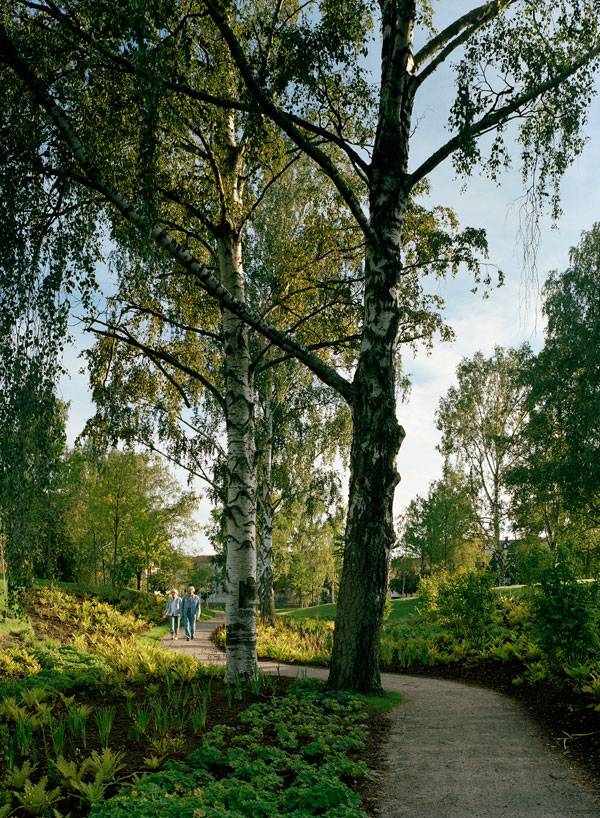