Sjövikstorget Square, by Andersson Thorbjörn with Sweco architects, Stockholm, Sweden Just as we sometimes feel the need to retreat, we also occasionally feel the need for expansive freedom. With dwellings and neighborhoods becoming more and more constricted, such spaciousness is becoming a rarity. But we can learn from centuries of Japanese gardening masters that space can be “borrowed”. 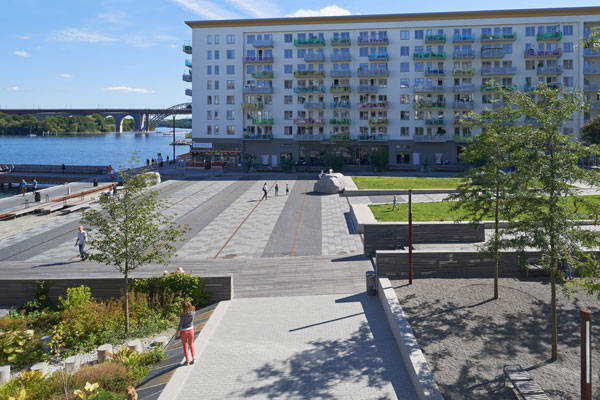 Concept of the Sjövikstorget Square

The idea of borrowing a backdrop from surrounding scenery is known in Japanese as “shakkei”. Shakkei refers to the exploitation of scenery external to a garden’s physical boundaries, either immediately outside or at a distance, for the purposes of visually enlarging the garden’s scale and enhancing its aesthetic appeal. Based upon this concept, Sjövikstorget Square in Stockholm, Sweden, is designed in such a way that the views toward water and the distant surrounding landscape appear to be a part of the square. 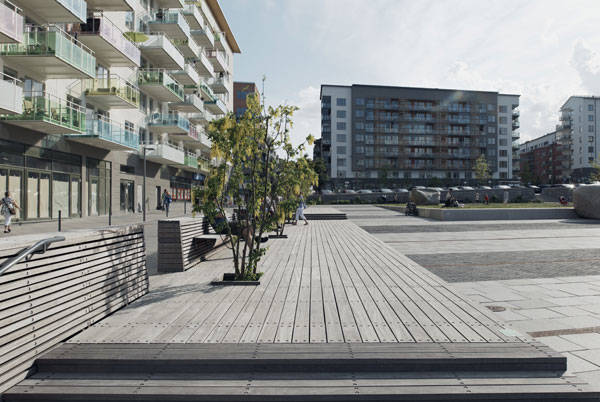 Designed by Andersson Thorbjörn with Sweco architects, Sjövikstorget Square is a waterfront redevelopment project in which all four ways of borrowing landscape have been used:

One of the most beautiful cities in Europe, Sweden’s capital city spreads out over 14 hilly, convex islands in Lake Mälaren and looks out proudly to the Baltic Sea to the east. Situated on the Årstadal quay, the framework plan for this project encompasses two recreational lawns, promenades, boardwalks, tree groves, and a dock. 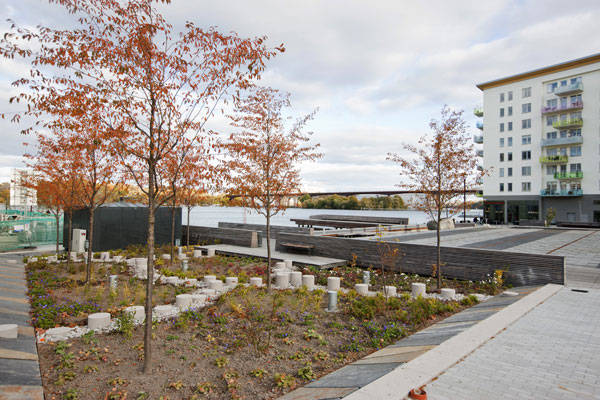 With the site being convex in shape, it naturally impels outward motion toward the water and to more distant views, and so does the concept for the square. To accentuate this effect, the trianglur “square” is sloped at 3 percent from its flat surface toward the primary view. The slope of the two lawns rises gradually from the ground plane in an opposite direction to the slope of the plaza, making its visual aspect more prominent. These two lawns serve as an area for playing, relaxing, and picnicking, bounded by broad granite edges for seating. At their south end, the edges are depressed and tapered for easy access by people with mobility issues, so that they too can enjoy the qualities of a well-designed public open space. Related articles: 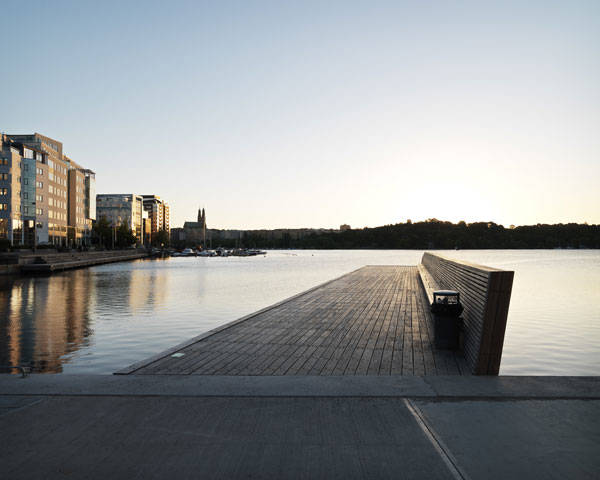 Framing Device at Sjövikstorget Square One-hundred-meter-long wooden promenades frame the plaza and bracket the view, acting as a framing device to limit the borrowed scenery to desirable elements. Along their outer edges, there are seating surfaces enhancing social interaction in the plaza. At the outer perimeter, a parking lot has been provided, making the square free from vehicles and allowing free pedestrian movement. 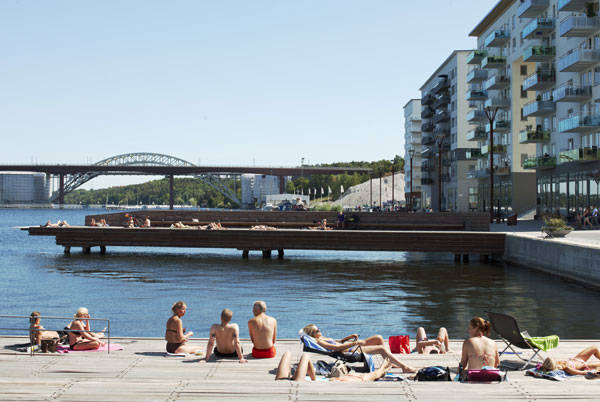 Utilizing Sjövikstorget Square’s Forces (Gyishaku) A series of terraces approaching the water is oriented to the west to catch the maximum sunlight. These sun terraces are used for relaxing and sunbathing. To the west, a 40-meter-long dock extends beyond the quay, supported on piers drifting on the water. This extension maximizes the amount of sunlight in the north-facing square. The drifting dock is accommodated with seats, giving a feeling of floating on water. The glimmers of sunlight on water, its sight, and the lapping of water on the shore elicit an exclamation of discovery and delight in our minds. Balancing Composition of Sjövikstorget Square One of the important features of the Shakkei technique is the balance in composition with the scene in the foreground. To maintain a balance with the openness of the triangular square, a second triangular grove of semi-transparent Honey Locust (Gleditsia triacanthos) trees occupies the western side. 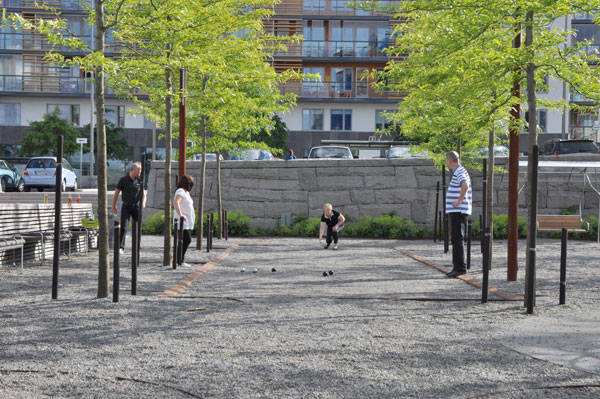 These species have been selected for their fast growth and low maintenance. These are planted along the paved gravel lane to provide shade where children play bouclé games. The grove descends to form a sunken garden with ornamental trees like cherry for landscape restoration. Water Features and Sculptures at Sjövikstorget Square To add more fascinating and artistic value to the plaza, water features and sculptures have been meticulously designed. The water feature is 35 meters wide, starting from a thin layer of water rushing over the surface of Norwegian slate, evoking a sense of pleasure as the water trickles gently past users’ feet. 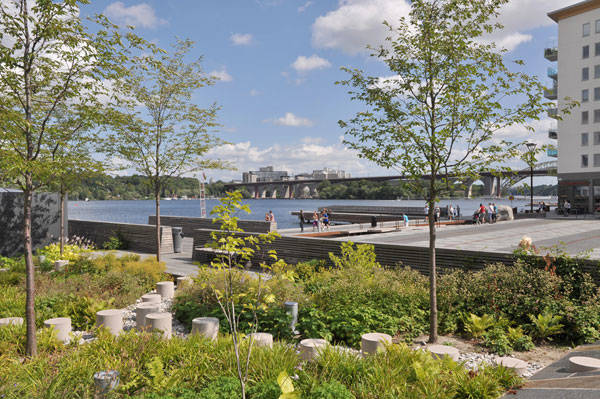 Sculptures designed by the artist Jan Svenungsson are ecofriendly. Three large, natural boulders are sculpted at different positions of the square. One is carved with headlines taken from the city’s newspapers on the day the square opened to the public to mark its opening day. Colors and Textures of Sjövikstorget Square The colors and textures of the whole square have been chosen wisely, with colors varying from gray to green and materials varying from granite and concrete to wood. The textures of the pavers range from coarse to smooth. The use of varying colors, textures, and materials with their natural looks complement each other and ward off boredom. Overall, this is truly an inspiring project from which we can learn about the traditional Japanese “borrowing” concept and its application in a contemporary landscape design. Recommended Reading: