Israels Square, by COBE, Copenhagen, Denmark In 2008, the Danish architectural firm COBE won a competition for the redesign of Israels Plads (or Israels Square) in central Copenhagen and the project was completed in 2014. The square is located between the City Centre and Ørsted Park and within a couple of blocks of Nørreport metro station and the Botanic Gardens. The square consists of two urban plazas, one containing a busy covered market. The other plaza includes the newly rebuilt section, which is the subject of this article. The square’s easy accessibility to the city center and residential neighborhoods lends itself to a variety of uses. Over the years, the square has undergone a series of transformations, in accordance with the requirements of each era. Although transformed, elements from its past continue to exist 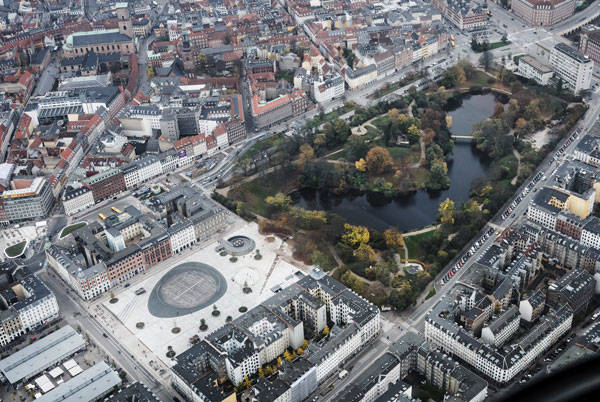 Israels Square is a Part of a Rich History

The square is located in a historic precinct that once formed part of a larger defensive ring established to protect the city from invaders. The defensive ring consisted of a series of moats and ramparts and was decommissioned in the mid-1800s. Some of the original moats have been turned into lakes and are located in Ørsted Park. Israels Square was constructed above the old ramparts. By the early 20th century, there was a fountain at one end of the square, which came to be known as Hundetorvet, which means Dog Square in Danish. 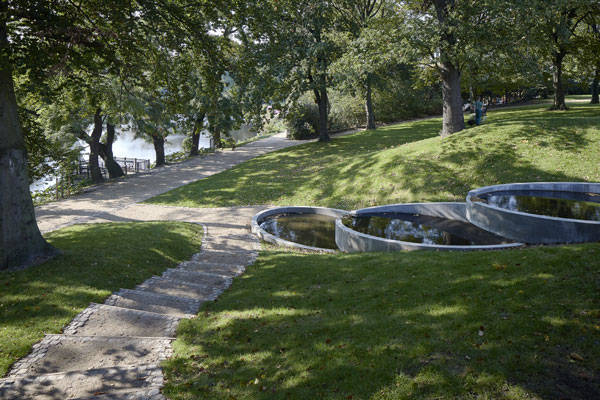 As the name suggests, it was a favorite place for walking dogs. It was later incorporated into the adjacent vegetable market, or Grønttorvet, and was renamed Israel’s Plads in 1968 in memory of the Jewish citizens persecuted by the Nazis during World War II. Related Articles:

The Times Changed Yet Again for Israels Square

By the 1970s, the square was functioning as a car park at one end and as a venue for informal ball games at the other. It was considered rather unappealing until its refurbishment. 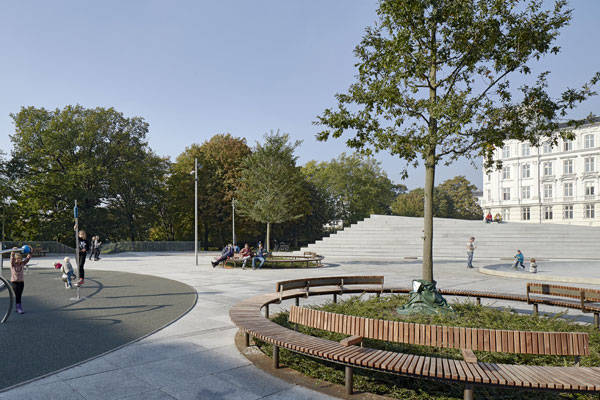 By the early 2000s, the city’s residents overwhelmingly desired a more vibrant and diverse lifestyle. The City of Copenhagen would cater to this demand, in part, through redesigning the square. Residents would be offered an alternative to outdoor café and commercial activities. At the square, they can enjoy a variety of pastimes without spending a single Krone or Ore. The Competition for Redesigning Israels Square The design brief for a 2008 competition provided for the refurbishment of a portion of the square into a contemporary urban space that retained its multi-use character, connected with its surroundings, and acknowledged its history. 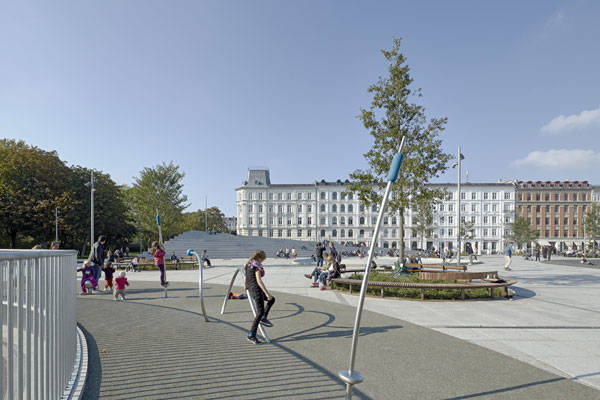 COBE’s winning proposal provided for a multi-use square accommodating a variety of uses, including sports, concerts, demonstrations, and markets, as well as its integration with the adjoining park. COBE’s View For Israels Square — A Magic Carpet Between Two Worlds COBE saw Israels Square as a region “hovering” between two worlds — the city and Ørsted Park. The square was raised, on average, 30 centimeters and incorporates subtle changes in level that add interest and enhance its multi-use functionality. The new square is a “folded” or layered surface that “floats” above the ground, like a magic carpet, enabling the park to wander into the square as a series of cut-outs on the surface. Additional features include seating, a lowered playground, and areas for ball games. An artificial stream covered in sculptural shapes also traverses the square and ends in a little waterfall at the edge of Ørsted Park. 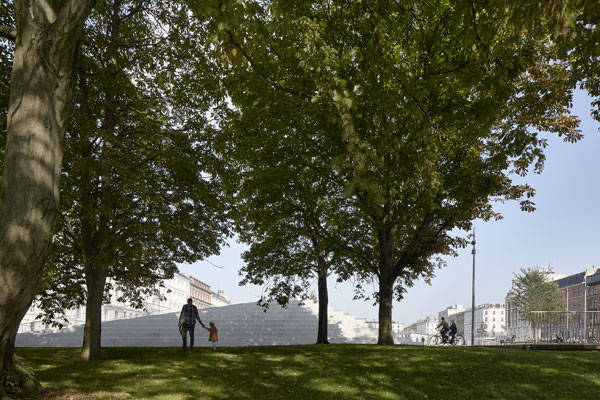 Subtle Integration of Israels Square and the Park The re-built square extends approximately seven meters over the park. Rather than remove any trees from the park, a number of holes have been punched out of the square in order to retain the existing trees, as well as incorporate new trees. This feature makes the park an integral component of the square and enables a gentle transition from the mostly hardscape environment of the square to the rampant greenery of the neighboring park. The park is reached via a spiral staircase that gradually widens as it approaches the ground. 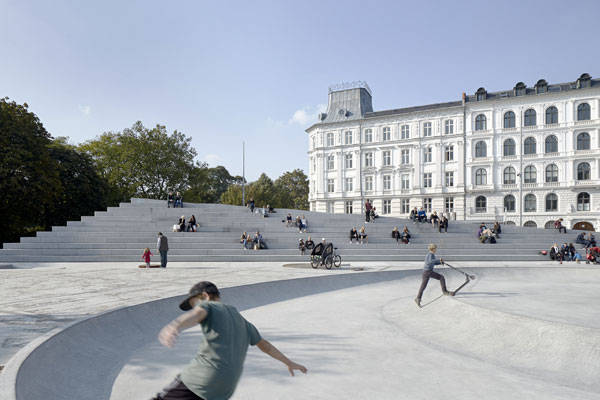 At night, a different atmosphere is evoked. Lighting is adjustable according to the requirements of the users. LED lighting lines the edges of the square, and the punched holes are accentuated by strip lighting, giving a sensation that the whole square is floating. 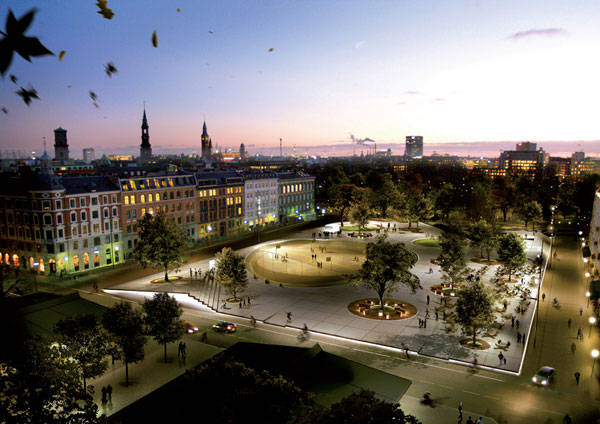 Israels Square has a Rich History yet Looks to the Future Israels Square brings together many different worlds. These include the natural parklands, the steel and concrete of the inner city, history and the present, and the worlds of the diverse populace. Although the square and its surrounds are continually being transformed, closer observation would hint at relics of earlier eras, an informative palimpsest landscape. The general impression is that the rebuilt square has added functionality to the already multi-use nature of the space and improved the connectivity between the square and the surrounding gardens and urban area. Article by Gerard de Silva Recommended Reading: