Tel Aviv’s Habima Square, which connects Chen and Rothschild boulevards, hosts a number of cultural venues, including Habima Theatre, Mann Auditorium, and Helena Rubinstein Pavillion for Contemporary Art. Also known as Orchestra Plaza, the square’s importance to the city is undeniable. However, its design generated a few controversies when a sculptor, rather than a landscape architect, was put in charge of the project. The situation raises questions such as: Should the space be considered a work of art rather than a public space? Will it function as such? Are landscape architects the only professionals capable of designing outdoor spaces? These are not easy questions to answer.

In the late 1920s, while designing Tel Aviv’s master plan, Patrick Geddes proposed the idea of establishing a cultural center. The area he chose was instead used as a plant nursery from the 1930s to the 1950s. It then was used as an agricultural farm, a soccer field, and a parking lot before it finally was turned into a modern “Acropolis” in 2010 — as envisioned by Geddes many decades before.

Habima Square, sponsored by Tel Aviv’s municipality to comemorate the city’s 100th anniversary, echoes the rigid architecture of the surrounding buildings, with their bold and incisive geometric patterns. The main features include a sunken garden with colorful flower beds, a beautiful reflective pool right in the center of the plaza, and a series of arches and a line of trees that lead to Rothschild Boulevard.

The Designer Internationally renowned painter and sculptor Dani Karavan was in charge of the plaza’s design. Karavan’s father, Avraham, was the city’s official landscape designer (he also maintained the municipal nursery where the plaza is now located), but father and son’s approaches are quite different when it comes to designing a square. Karavan’s proposition aimed at creating a minimalist and refined plaza to match the architectural language of the White City. He sought to create a bright and optimistic square to be used and enjoyed by the public. The artist opted for light-colored tiling and kept the sunken garden reminiscent of the old nursery. Despite all the dedication, planning, and hard work, the designer remains dissatisfied with the results, as things have not happened quite as planned. Renovation and Controversy Lack of shade is an issue at Habima Square, as the trees planted will only be big enough to provide proper shade in another few years. The choice of a light color for the surface, which seemed so appropriate, is said to cause glare and consequent visual discomfort. Maintenance is a predominant issue, as well: The fragile sculptures designed by Karavan need constant supervision, which is quite difficult in such a busy public space. Looking at the bright side, the plaza’s worn-out parts could be considered a sign of intense use — a good indicator of public approval. 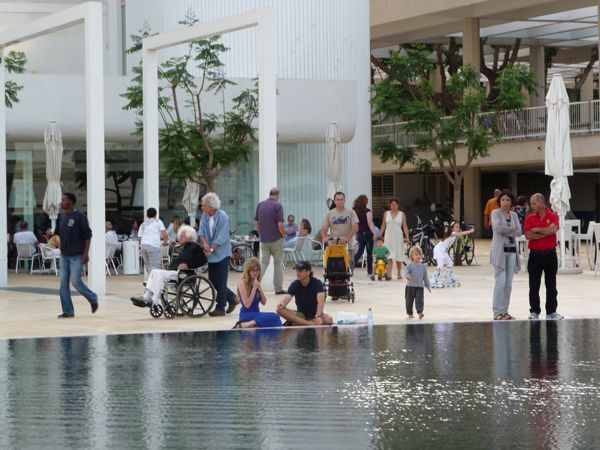 Collaborative Work Habima Square is definitely not an ordinary public space. It is an elegant, open area inserted in an exciting, culturally rich setting. An artistic approach was indeed necessary here to reflect the cultural atmosphere of the surrounding venues. Below: A  really cute overview of Habima Square We would not dare to criticize such a talented artist’s work, but we do encourage a more interdisciplinary approach during the planning process. Landscape architecture is such a complex activity; achieving the perfect public open space means embracing the knowledge of artists, gardeners, climatologists, psychologists, social workers, agronomists, engineers, and so on. Such a difficult task calls for a holistic approach to design, something that should be considered by all contemporary professionals. Article written by Julia Lucchese Published in Blog