It was a crisp sunny day with clear blue skies in November when I last visited Governors Island.  I was cordially invited to participate in the event to commemorate the completion of 30 acres of new park on Governors Island and to plant the 800,000th tree as part of the MillionTreesNYC initiative that Mayor Bloomberg started in 2007.  It was a real pleasure to see the newest area of the park, which will be accessible to the public on May 24, 2014.

If you plan to visit to Governors Island in the spring, you will see 2,000 of the MillionTrees newly planted on Governors Island, including Sassafras, Sourwood, Redbud, and Tulip trees.  Mayor Michael Bloomberg along with other notable dignitaries affiliated with the park wielded golden shovels full of soil to symbolically help plan a new Gingko tree. 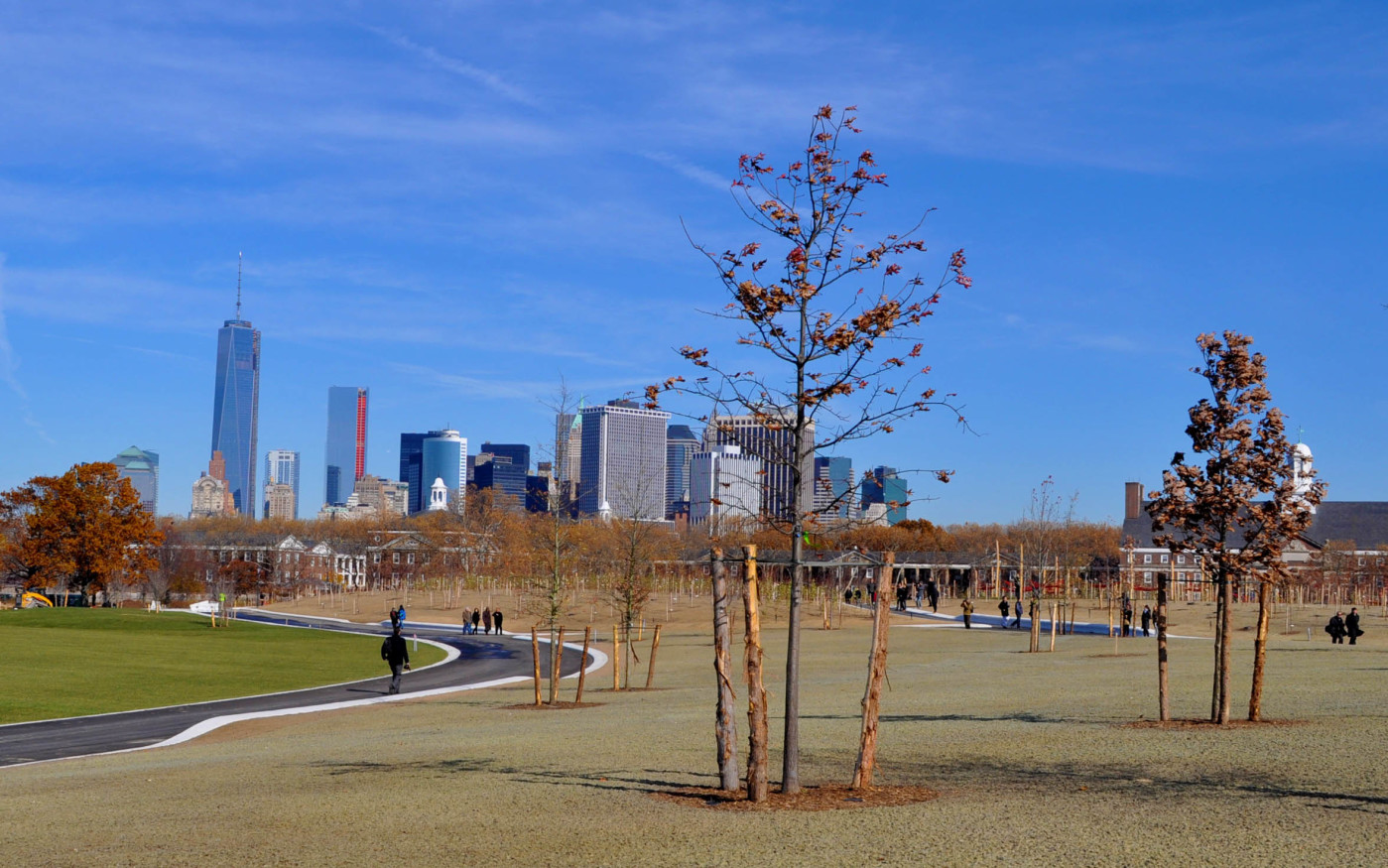 Another exciting new addition to the park are the hammocks!  In fact, a whole grove of hammocks!  It’s quite possible that the November ceremony may have been the only time that I’ll ever see those hammocks unoccupied.  The hammocks are broad enough to fit at least two people and they’re quite welcoming with their bright red hue and generous views over the harbor.  In the same way that the outdoor chaise lounges in became so popular at the High Line in NYC and City Deck in Green Bay, Wisconsin, it wouldn’t surprise me if hammocks start making appearances in public parks across the country. 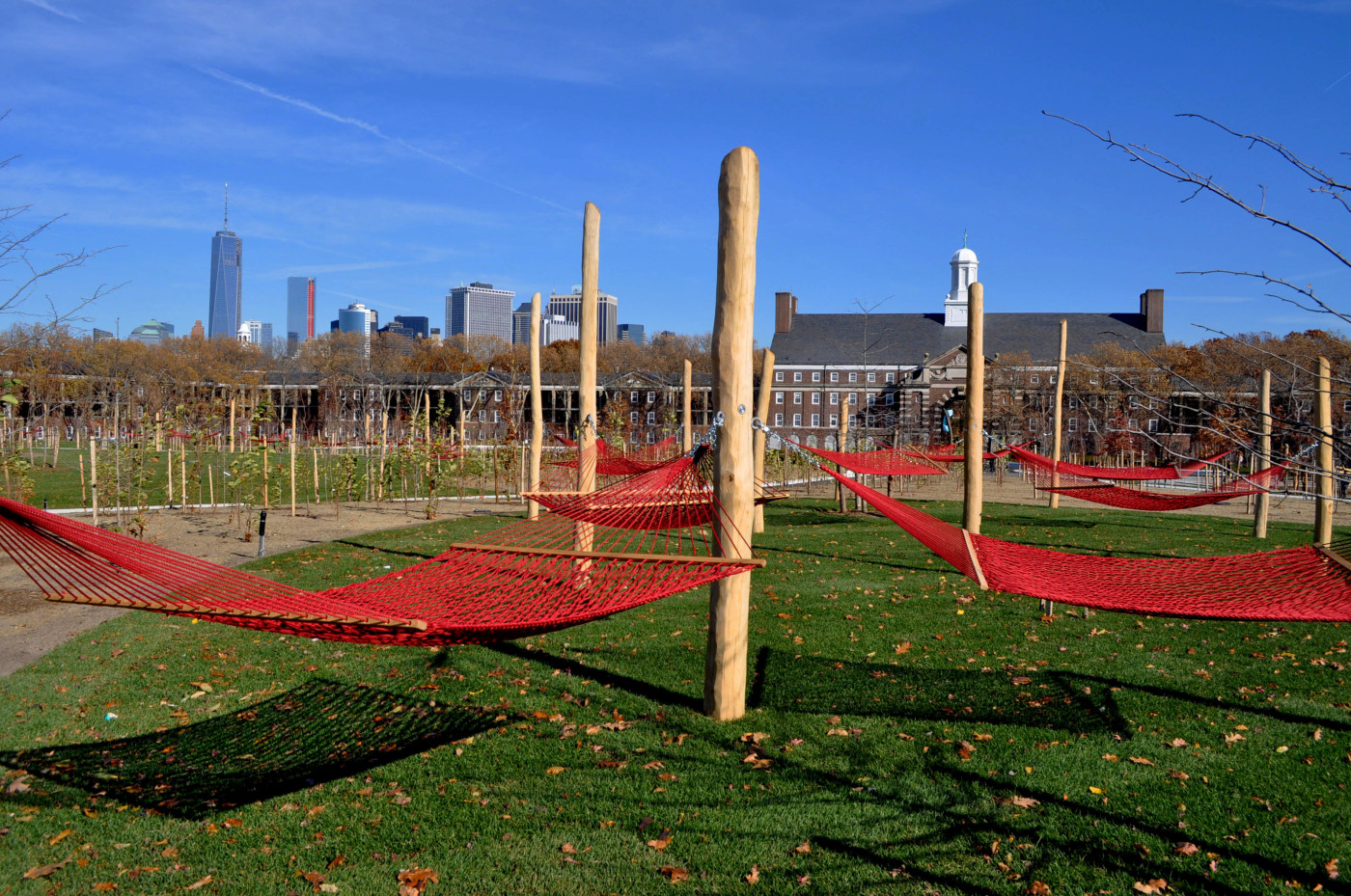 The level of attention that was put into the design of this park is evident in the typography of the Governors Island signage, which was produced specifically for the park.  Adriaan Geuze, of West 8, explained to me that they wanted a unique typography for the park that doesn’t exist anywhere else.  The design team added a subtle curve to the lettering, which can be most readily seen in the ‘A’, ‘M’, and ‘V’.  This elegant detail ties back to the sinuous white concrete walls that line the pathways. 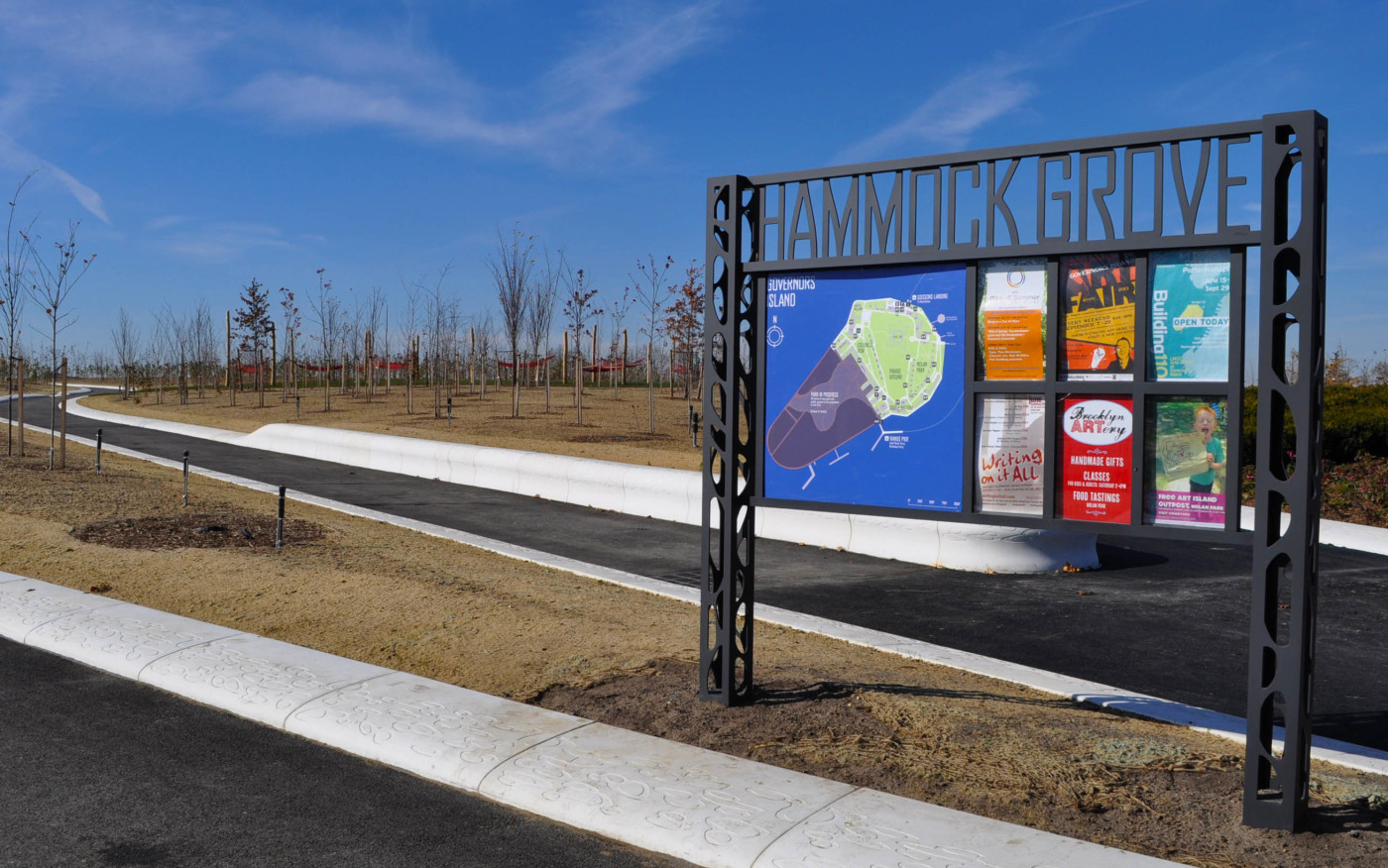 New sculpture installations also enliven the park with a sense of whimsy.  The artist Mark Handforth’s ‘Phone in Tree’ sculpture hangs high overhead, prompting everyone to look up and stare at the object, as if waiting for it to emit some important message.  The old-fashioned phone receiver is perched in the crook of a denuded tree trunk like a lost and found object forgotten by a giant in the 1990’s. 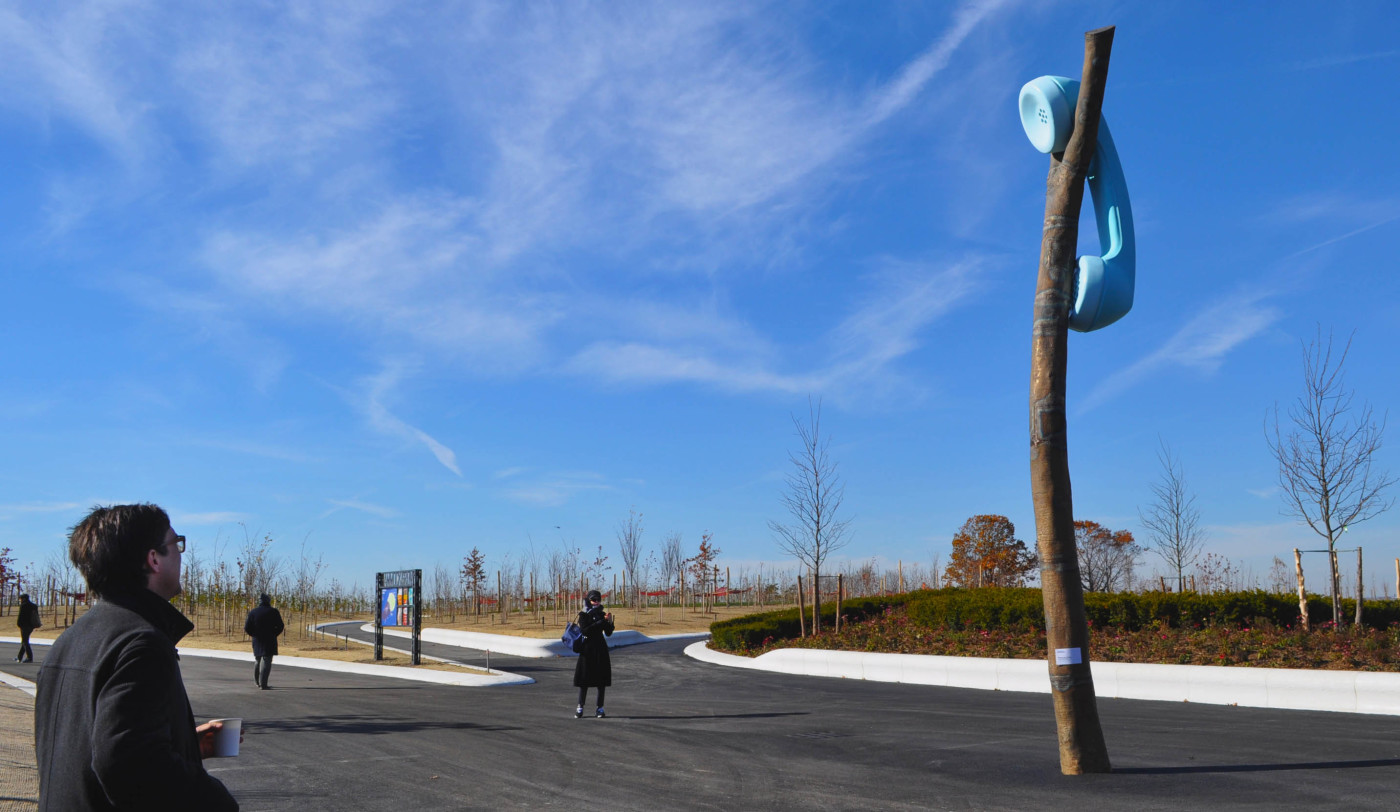 Meanwhile, the great copper clad Statue of Liberty can be seen in the distance from Governors Island.  She can be seen as a backdrop to the dugout of the new baseball fields on the island.  During my visit it appeared as if Ms. Liberty was surveying the construction site from the vantage point atop a mound of dirt, making sure everything lives up to her high standards.  So far, so good, she seems to say. 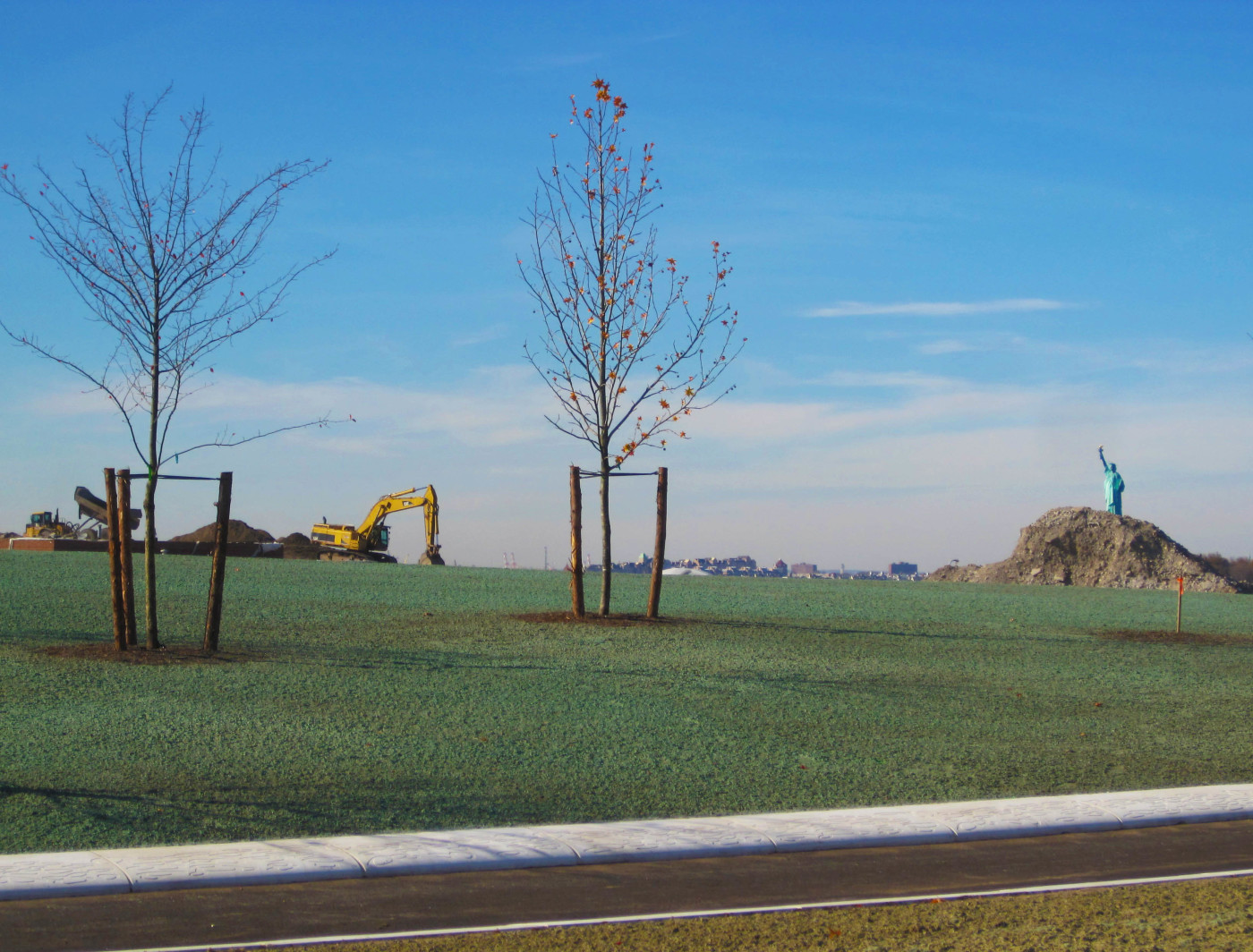 All other images photographed by Annie Bergelin