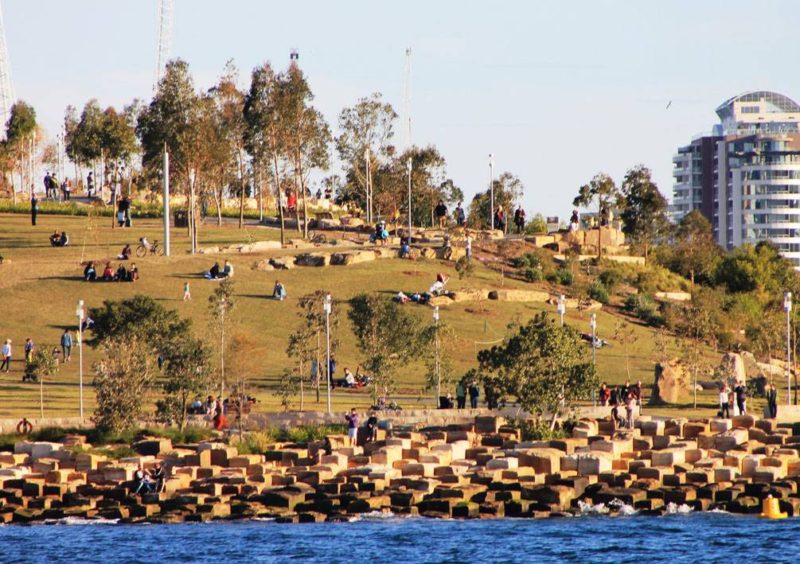 By Maria Giovanna Drago – We take a look at 5 projects and show how they represent landscape architecture over the 5 continents.  The stories of people can keep on living within architecture and transform it into the materialization of dreams and wishes or actions and roots. For this reason, we have researched, loved, and finally chosen five landscape architecture projects with a strong connection to people whose stories have not been told enough. We want you to discover and love them too! Keep on reading to excite your imagination. We encourage you to choose one relatively close to you and visit it in person, with the awareness of knowing a little bit about it before you go.

There’s a naturalistic park along Sydney Harbour where you can stay in touch with the wild side of nature and the spirits of the natives. The Barangaroo Reserve used to be a container terminal. Nowadays, it’s a green headland that recreates the shape of the ancient seashore. It’s the first step of a three-part master plan for the space. The 5.7-hectare reserve boasts a spacious lawn that slopes to the sea, with luxuriant terraces and a giant serpentine wall of stones along the shoreline. Alongside this is a 10-meter-wide walkway called “Wulugul Walk”. Large staircases and paths connect the top to the bottom. Shiny green algae grow over honey-colored sandstone blocks falling deep into the sea. 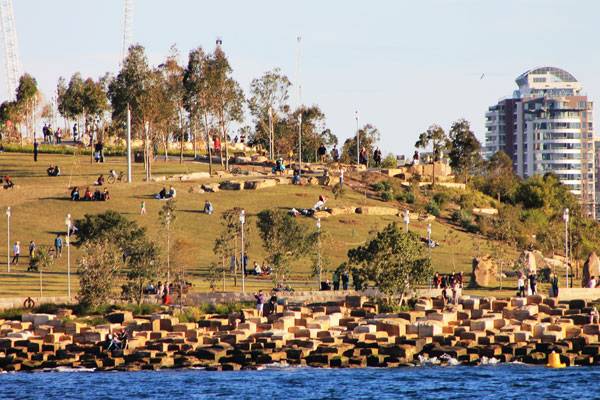 You must be careful not to slip! There are more than 10,000 blocks in 300 different sizes carved directly from the site and neatly arranged — a good and economic example of local sources employment. The reserve remembers that progress is not just about industrialization, but also about roots and respect for the environment. Why roots? It’s meaningful for history and memory, but also for nature. Barangaroo is named after the female leader of the local Aboriginal community who is known for the planting program that restored the native vegetation that flourished here before the European settlement. Fifteen hundred Aboriginals lived here, fishing and hunting, and 84 species have been chosen by an expert horticulturalist to stay here. They were grown in Mangrove Mountain before being transplanted, and now they all give rebirth to a landscape that once seemed lost forever. WATCH >>> Barangaroo Reserve’s whole of life time lapse

This is a garden with a strong story: the hard journey to freedom of the South African population. It develops along the gentle slope of a ridge, and all its elements have a secret meaning. Visitors start at the north entrance, at the Hapo Museum building, where they can retrace South African history back to the prehistoric period. The landscape of the park stretches right outside in front of their eyes. Along a series of paths, they can reach the top and the S’khumbuto — a terraced amphitheater that embraces a small body of water overlooked by the Sanctuary on the other side. 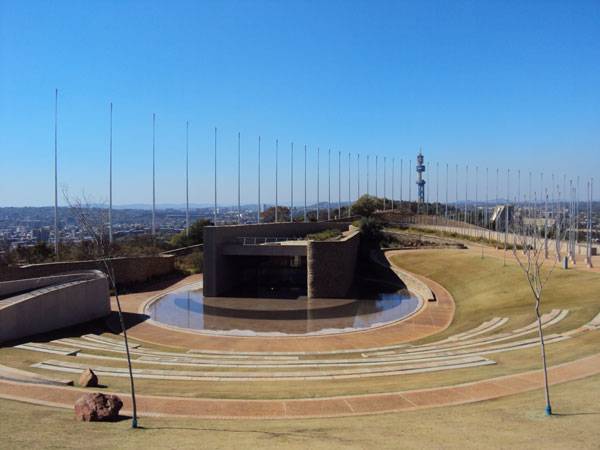 The Sanctuary is an indoor place with a terrace sloping to the ground. It is rectangular and features a big window opening onto the lake, connecting the inside with the outside. The Eternal Flame burns in the water right in front of the window. Visitors can hold private ceremonies in here. Next to the complex to the south runs the 697-meter-long Wall of Names, where 75,000 names of victims and heroes are written. Adjacent to the left there’s another indoor space: the Gallery of Leaders,which honors local and international personalities who inspired heroism. Next to it stand 200 tall metal reeds that are visible from across the city, symbolizing the rebirth of the nation. 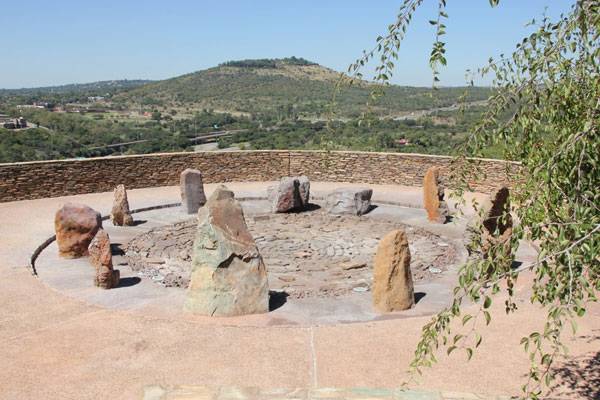 Further along the paths, visitors can reach the Isivivane. Here, there is a semi-circular seat around an Umlahlankosi tree, reminiscent of the trees used by African tribes to discuss important issues of the day. A circular, flat shape encircled by nine boulders represents the resting place for the spirits of heroes. There is no place here for grief, but for celebration. The Freedom Park is a collective memorial that inspires fraternity and meditation.

3. Fort Worth Water Gardens (1974) – Forth Worth, USA, by Philip Johnson and John Burgee

The Fort Worth Water Gardens rise just in the middle of the city from the ashes of a small quarter where people used to spend their time at brothels and drinking in saloons. Amon G. Carter – publisher of the Fort Worth Star-Telegram – decided to make a gift to his fellow citizens, renewing the space with a breath of fresh air. He commissioned the project to architects Philip Johnson and John Burgee. 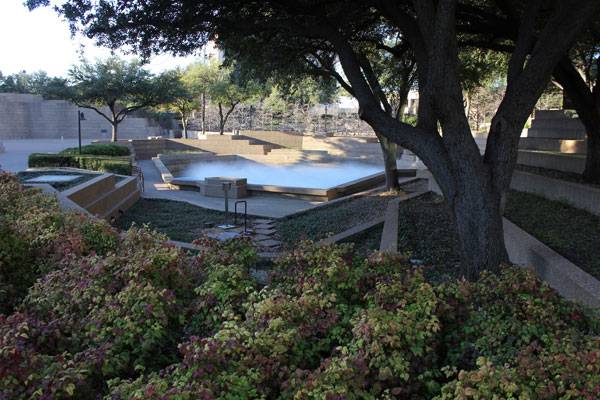 The 4.3-acre garden has become the flagship of the city. It sits adjacent the Fort Worth Convention Center and is surrounded by large avenues on the three other sides. Its main element is water, as three unique fountains develop around a central plaza together with two terraced knolls. The giant terraced pool is amazing: It drops 38 feet down into the ground, with streams of water cascading from the side walls into a small vortex at the bottom. Thankfully, there are large steps that people can walk down so that they can sit around the pool. It’s astonishingly unique to be embraced by water and its roar! Next to it on both sides are two terraced knolls, one higher than the other, that screen the avenues. People can sit here to read books or work out on gym equipment. There are also other two pools: The bigger one is surrounded by a line of cypress trees and a more external wall that makes the space more intimate; the other is known for its water features. Water is a symbol of renewal, specifically chosen to give a message of hope. The status of the area today confirms how the project has reached its creator’s purpose of keeping the quarter vibrant and attractive. Today, this once maligned space is a mandatory stop for tourists and citizens and a cultural gathering place where people can listen to orchestras and bands.

There’s a path in Russia with the magical power to awaken the child within you. It’s hidden in the landscape of a park that gives you the chance to challenge gravity and movement. The Fast Track is a 51-meter-long trampoline on the ground accompanied by a row of trees. It’s one of the 10 best projects for a contest about the dualism of architecture and landscape published on the occasion of the 2012 Archstoyanie festival in Nikola-Lenivets. WATCH >>> Designer Proposes Trampoline Walkway

Its shape is simple, but it’s static and useless without people experiencing it. You can walk on the soft elastic band, jump, lie down, of fly down its length barely touching the surface. So whoever uses gives transportation an interactive meaning. How does the landscape look while you are jumping? Up and down? Slow or fast? People are not simply part of this landscape project: They are the protagonists. Without them, the project has no meaning. The Fast Track is also a place for artistic performances.

This is not just a park, but a memorial to industrialization and the citizens’ own history. The city of Turin decided to take advantage of such a relevant area to reactivate and imbue it with new importance. Parco Dora is born from the recovery of a former huge industrial area in Turin where Fiat and Michelin had big factories up until the 1990s. Five lots make up the area: Vitali, Ingest, Valdocco, Michelin, and Mortara. The site is also crossed by the Dora Riparia, a 102-kilometer-long river. 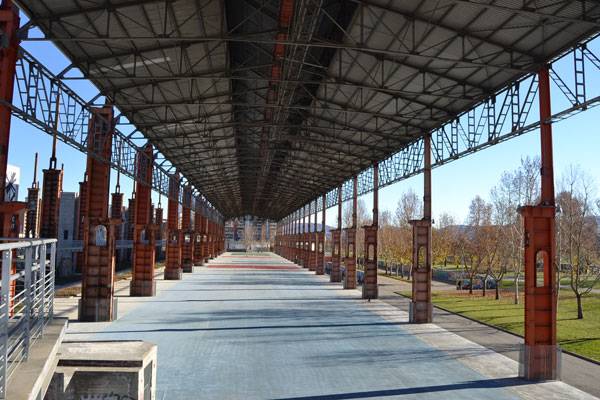 The Valdocco area is on the east side on both sides of the river; this last is currently covered by a concrete slab that is expected to be removed. Beyond the ordinary walkways on the green, it’s quite a surprise to discover a big cage: It’s the remaining structure of a warehouse of small irons in which tall trees have grown to peek shyly through the bars. The Mortara area to the north is a pedestrian itinerary developing on a busy road. What was once an open-air road is now a large green promenade lined with trees and characterized by blooming pergolas. It also hosts a dog-friendly picnic area. 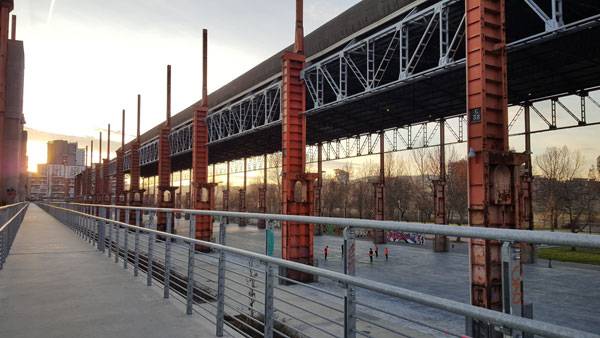 Lotto Vitali dominates the central area of the park, with unique high steel columns painted red, which can be seen from afar. Some of them enclose an amazing piazza characterized by a rectangular lawn, while others still keep part of the cover. The space below the roofing is equipped with playgrounds, a tennis court, a volleyball court, and a skate ramp. There are some walls available for young writers near a mural dedicated to the Irish activist Bobby Sands. The Ingest area connects to Vitali by an elevated walkway on pre-existing pillars and reaches its core at the water garden. The garden is characterized by water channels in motion and artificial basins, realized by filling the foundation site of previous buildings with water. You can admire the large plinths still emerging. Last to be opened, the Michelin area is a large green lawn dotted with trees and crossed by pedestrian paths. Its emblem is the preserved silhouette of the cooling tower of the industrial complex, which marks one of the main entrances and is the logo for the whole park. We always wish to make our readers curious and give them an additional point of view. We act behind the scenes to investigate and find out the secrets that make each project so special. It’s hard work, but we are rewarded by the deeper knowledge and appreciation that we share with all of you.