Our 8th edition of Sketchy Saturday, the first in the New Year! With all the quality work we’ve been receiving, we could easily churn out several of these each week! It is always a difficult task to select the best from the best. Well, let’s check out this week’s top 10 sketches. Prepare to be inspired and possibly spontaneously get your drawing gear out and submit some more for our selection!  10. by Manizheh Eskandari, Iran 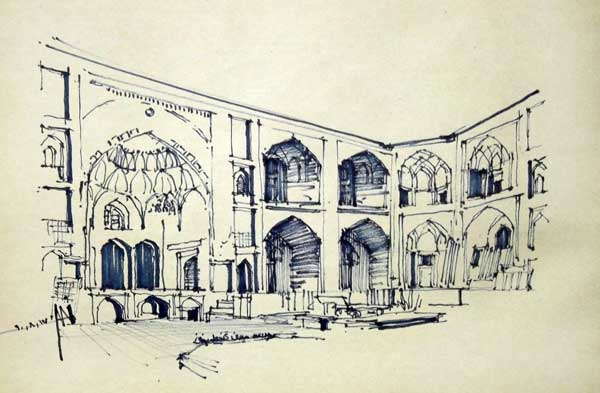 The boys’ school in Kerman

‘I did this sketch in a cold evening with my husband (sitting nearby) in a boys’ school in Kerman. This school is only for boys who want to study something about Tradition and Religion, in Kerman’s Ganj Ali Khan square. Fortunately this school was open for the public because of reparations at that time. Ganj Ali Khan School such as most of Iranian schools has a rectangular yard with two perpendicular and 4 porches (ivan), Islamic arches, geometric tracery and ceramic mosaic tiles. I was sitting at the corner and drawing this picture for about 30 minutes, 2 years ago.’ 9. by Azmi Bin Elias, Malaysia 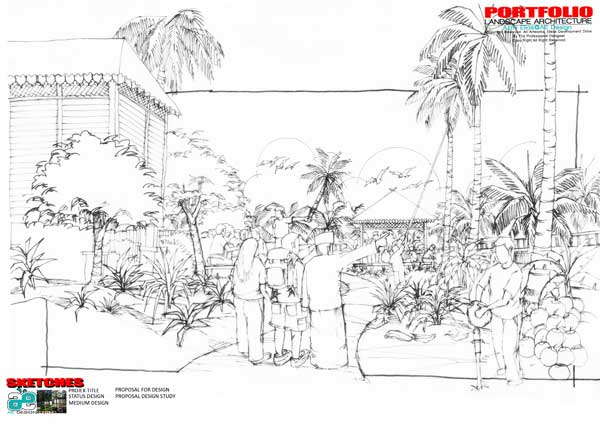 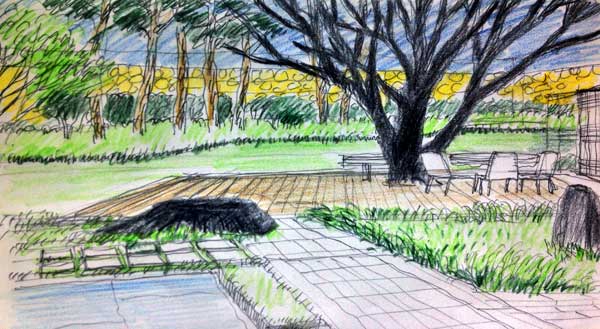 ‘This is a sketch of an existing private garden in Han-nam dong in Seoul, Korea. This garden design successfully shows the traditional space character ‘ma-dang’ and harmony with others. It was drawn in colour pencil rapidly on moleskin notepaper, which took about 15 minutes.’ 7. by Nayeli Pérez Contreras, architecture student from Puebla, México

‘The sketch is a perspective with two vanishing points of a house in a minimalist style. I added details with wood and brickworks and also a stone wall. I think that these elements create a natural landscape. I used the watercolour technique.’ 6. by  Dipti Kharel, Nepal 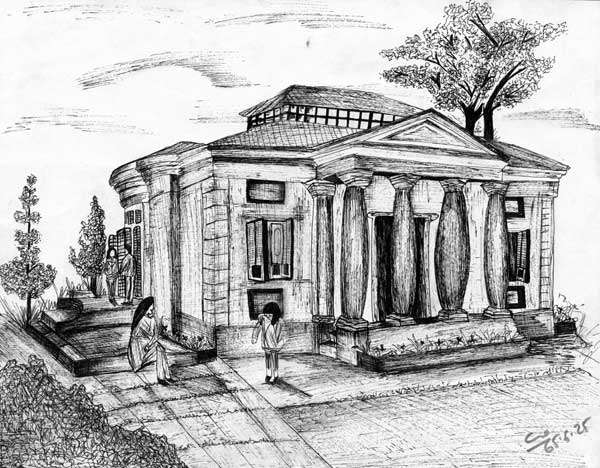 ‘I did this sketch in my 1st year of undergrad. This building is an example of neo-classical architecture (one of my favourites) which happened to be an assignment in our freehand sketching class..’ 5. by Meyssam Seddigh, Iran 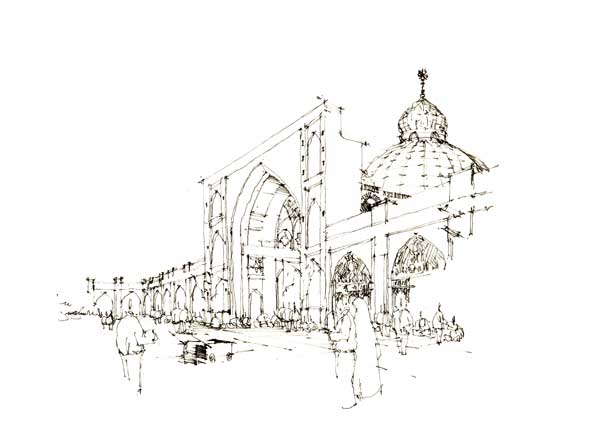 What we love about this sketch is its scratchy style, while it misses out on details it encapsulates the emotions and history of the space, the beauty of a sketch is that it doesn’t just capture the subject but also the moment in which it was drawn. ‘This is a sketch of Tehran’s Imam Mosque in the old Bazaar. This place has been built to gather  people together to solve their religious and social problems. This place is used for prayers at noon. The yard site is part of the bazaar.  It has an atmosphere of nostalgia for every Iranian. I’m sitting on the ground, in front of this view, while I draw this sketch. I’ve used ink pen for this sketch which was completed in about 1 hour.’ 4. by Ronak Roshan Gilavaie, Rasht, Iran 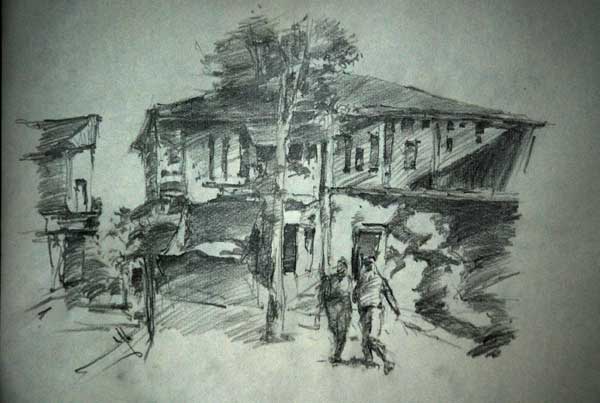 ‘This is a freehand sketch of a cityscape in Rasht done in December 2013 using black drawing pencil on normal paper at A4’ 3. by Patrick Francis Nelligan, student at The Pennsylvania State University

‘This sketch was constructed on task board with ink, coloured pencils and a parallel glider. The objective was to recreate Frank Lloyd Wright’s 1936 perspective drawing of the Edgar J. Kaufmann House (via The Frank Lloyd Wright Foundation) while concentrating and clarifying the surrounding forest canopy structure. Placement of a Cherokee Red blanket over the main balcony provides an intense focal point within the hushed woodland of colour. ” 2. by Hannah Wilson, landscape architecture student at Iowa State University 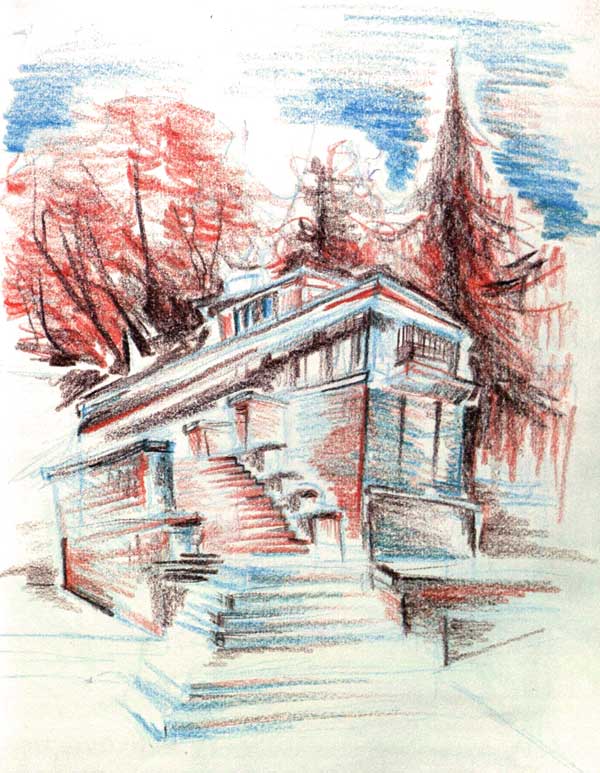 ‘This is from travelling from Minnesota to Mississippi with Iowa State University’s Savannah Studio. This is a 20 minute sketch done at Eagle Point Park, in Clinton Iowa. It’s mainly observing the Alfred Caldwell structures and design, done in coloured pencil.’ 1. The House by Mohamad Azam, Malaysia 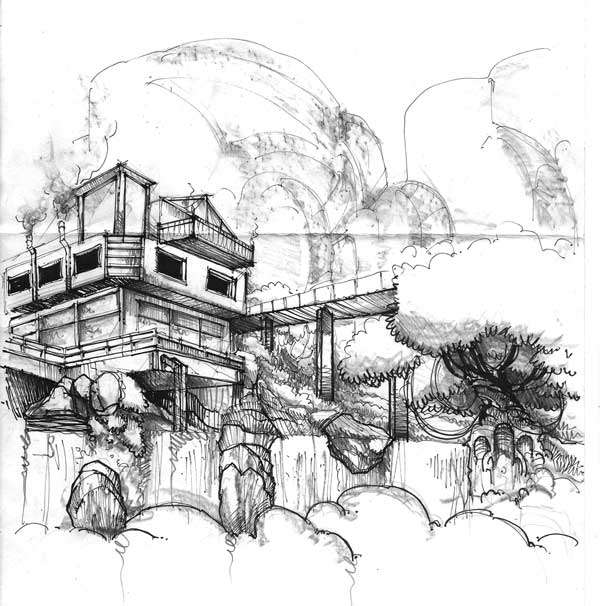 ‘It was based on the Fallingwater residence by architect Frank Lloyd Wright. I created this in late 2012 after finishing my diploma in Landscape Architecture.’ So there we have it, another selection of inspiring sketches of landscapes and fine architecture. It’s always a pleasure to look through fresh, brilliant work by our readers. Tune in next week for a new set of Sketchy Saturday and check out the previous edition as well. And remember to send your work along with a short description of the sketch to get a better chance of having your work selected for our weekly Sketchy! See you next Saturday! Article written by Oana Anghelache. Published in Blog