The green bike box that is! National Geographic contained an article last month called “A Bicycle Bump” which featured Portland, Oregon for it’s “171 miles of bike lanes, ten freshly painted green boxes (picture from the article above) that put cyclists safely ahead of vehicles, even some signals just for bikes.” And this isn’t the first time the yellow-bordered magazine has featured Portland. In the August 2008 issue, it named Portland the number one city in the top five bike-friendly cities in the nation.

It’s of no surprise that biking is on the rise. With gas prices soaring, more and more people are parking the car and choosing to pedal to work. How do they measure this? According to National Geographic, it’s by the additional bikes being places on the racks of buses. In the lead is Houston with a whopping 235% increase.

With more and more bike friendly streets being built and programs like bike-sharing, it’s hard for anyone not to have the incentive to keep the car at home. I thought the bike sharing program in Paris was great. It seemed like nearly every corner I turned I was faced with the scene in the image below, which I took near the Viaduc de Artes. 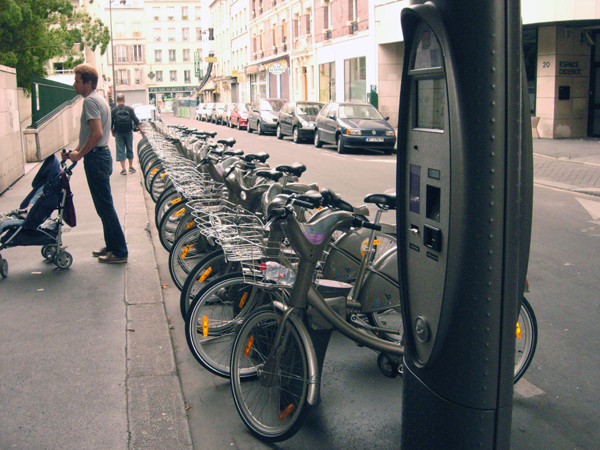 How wonderful would it be to show up in any city and be able to just grab a bike and go. Sure you can rent bikes for a time, but then they always have to be returned to the same place. Have a network of kiosks where you can pick up and drop off as you please purely on an as-needed basis is definitely something that would have more people grabbing a bike.

And then another issue, one that always kind of bothers me, is bikes on light rail trains. First of all, there is hardly any space on the cars for bikes and then during busy, commuter times the cars are so stuffed that bikers have little chance of getting on and people on the train just glare at the biker who had the nerve to bring their dirty bike on a crowded train. But a recent post by Brice Maryman in Seattle discusses a model for the city’s new light rail and it sounds like a much better option. With a consistently placed gallery car dedicated to bikes it should make both bikers and non-bikers happy.

And then, before you know it, everyone will be biking, there will be a whole network of bike trails within cities with their traffic signals and we’ll have trouble keeping up with the demand for bike parking and our plazas will end up looking like this one I encountered in Amsterdam 😉 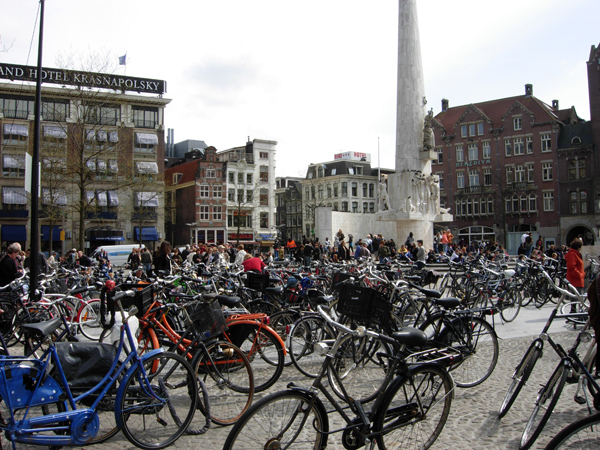