From New York’s High Line to Atlanta’s BeltLine, transit revitalization projects are popping up all over the U.S., and beyond. High-speed roadways, outdated railways, and abandoned subways are being replaced or modified to make room for bicycle lanes, expanded outdoor seating areas, plantings, and pedestrian zones. Once seen as crime-ridden, polluted, and congested, cities are now bustling with economic growth and development that constantly innovates. Are we witnessing the comeback of our inner cities? Kaid Benfield, a longtime leader of the smart growth movement, believes that we are inching towards the right kind of development – creating great places for people and for the environment. In Episode 7 of Remarkable Objects, Kaid touches on how land use practices are changing in a positive way, and how all community members play a part in making cities better.

Named one of “the most influential people in sustainable planning and development” by the Partnership for Sustainable Communities, Kaid Benfield has a commitment to forward-thinking approaches to environmental challenges. Kaid serves as senior counsel for environmental strategies at PlaceMakers LLC, a planning firm that helps communities make their neighborhoods better. He is also co-founder of USGBC’s LEED for Neighborhood Development, a national rating system aimed at creating more sustainable neighborhoods, and co-founder of Smart Growth America, a nation-wide coalition working to revitalize cities.

In his most recent book, People Habitat: 25 Ways to Think About Greener, Healthier Cities, Kaid advises us on how to make cities and neighborhoods work better, for both people and the environment. He admits that in the past, cities were not built for its residents. They were centers of pollution and roadway corridors that brought people from their homes in the suburbs to their jobs in the city. Kaid states: “We didn’t do very well by our cities in the 1960s, 1970s, 1980s, and it wasn’t really until the dawn of the 21st century that I think we had a critical mass of people who said, “Wait a minute, there’s a lot about city living that’s really attractive.” It is only until recently that we “woke up” and came to the realization that cities needed to be designed with people, rather than industrialization, in mind.

Today, more public spaces are becoming pedestrianized, and our roadways and outdated infrastructure are being reimagined as parkways. Urban revitalization projects have transformed run-down cities into thriving communities. For example, Over-the-Rhine, a historic working-class neighborhood in Cincinnati, was labeled the “most dangerous neighborhood” in 2009, with one of the highest rates of abandoned and vacant homes in the country. Investment in new buildings, the rehabilitating of parks, and the development of vacant lots has driven out criminals, while maintaining subsidized housing and preserving the historic charm. 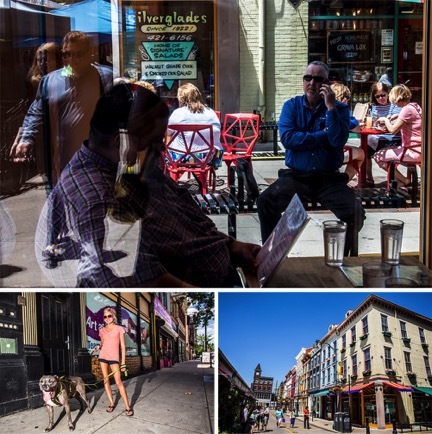 Kaid emphasizes lovability as a key component of sustainability, stating: “It’s the places that we love that are going to last.” He suggests that the integration of nature into cities is part of what makes them lovable and attractive. Having places where communities can gather is important not only for the improvement of the built environment but also for the mental and physical health of human beings. Having more public spaces for people creates better cities.

There are still many problems within the design of our cities left behind from the sprawl era. Innovative strategies will need to be developed to repair our cities and create places for people. Kaid works with cities to change zoning codes and planning documents to match the goals that they have for their residents. By helping community leaders, designers, policy makers, and others understand what tools are available to them, they are able to make the right decisions to better their city. The work done by Kaid and others like him is slowly changing the fabric of our cities, balancing the human and natural landscape, and creating spaces for people.

—
Remarkable Objects, hosted by Leda Marritz, Creative Director at DeepRoot, is a new podcast about the intersection of nature and urban design. In each episode, we will hear from leaders and innovators whose work aims to influence the way we think about, design, and build the urban environment.