Iconic, candy-coloured and hugely popular, Toronto’s award-winning Sugar Beach is making headlines again, but this time the story’s not quite so sweet. 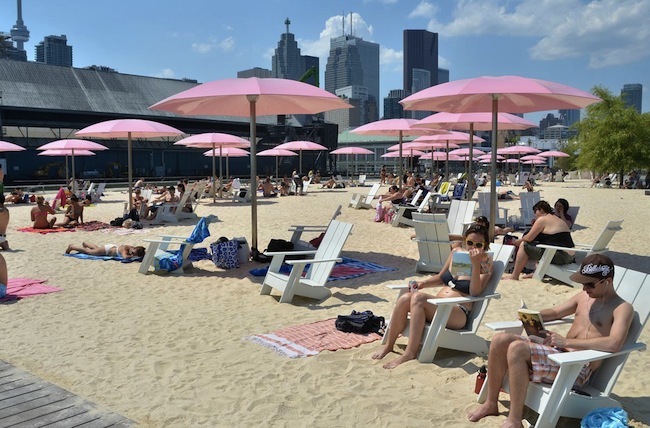 There’s no doubt about it, Sugar Beach has certainly been a boon to the city of Toronto. Designed by Claude Cormier et Associés in 2010, the former parking lot has won multiple design awards, including the EDRA 2014 Great Places Award and an ASLA Professional Honour Award in 2012. The playful, whimsical urban beach has been a huge hit with both Torontonians and tourists alike and has flung Toronto into the international spotlight. 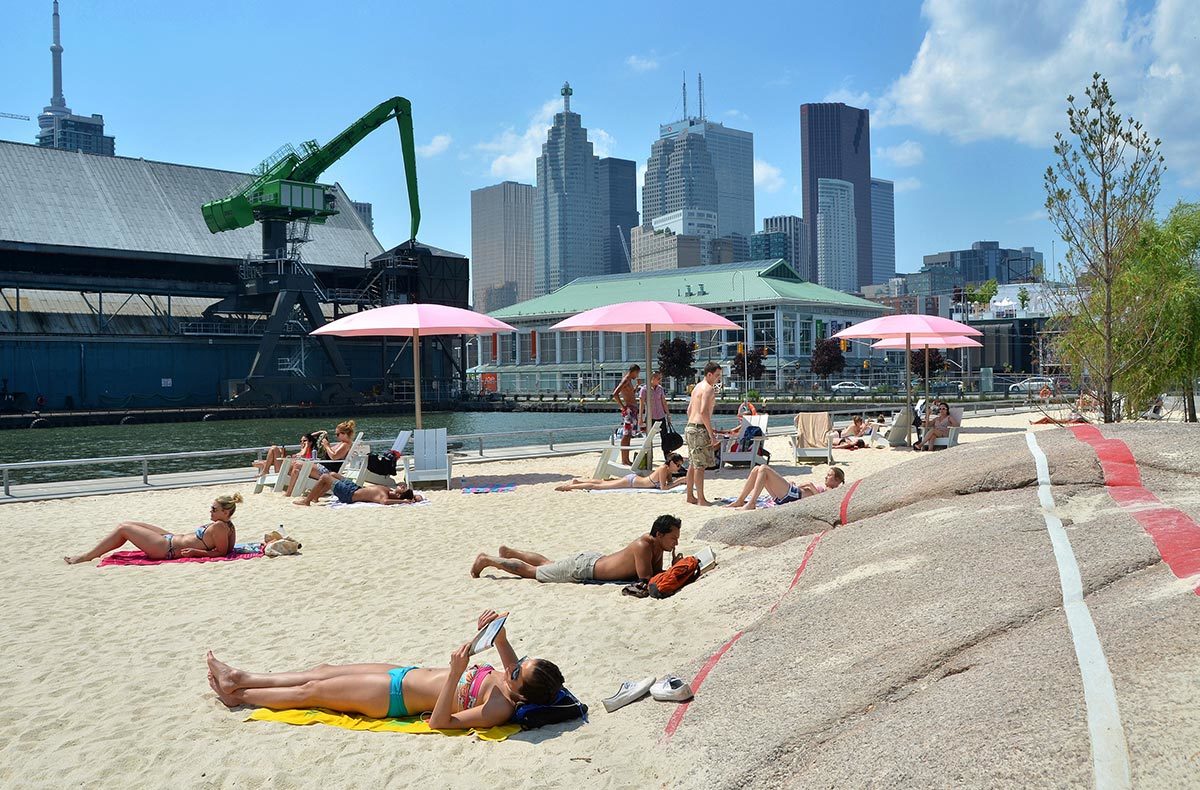 But the sugar-sweet image of this candied public space recently turned sour when the price-tag was revealed. Each of the thirty-six cotton candy pink umbrellas cost $11,565 and another $530,000 was spent on two huge rocks which were trucked in from the Laurentian mountains in southern Quebec. This exposé has caused public uproar among Torontonians, with many outraged at what they believe to be frivolous spending of tax-payers money. 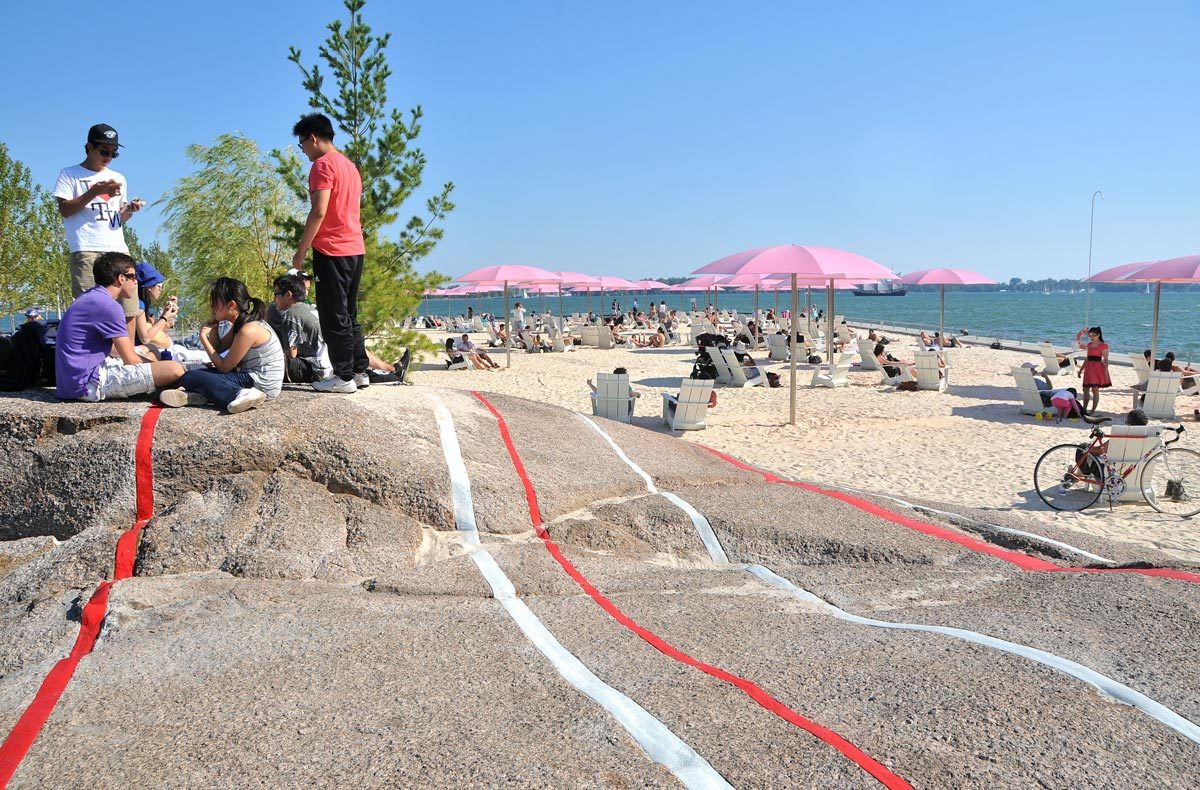 Both the designers and Waterfront Toronto (the agency behind revitalizing the city’s waterfront) have defended the cost of Sugar Beach with the explanation that the park is a valuable investment in the future of the city.

“Our mandate is to build great parks and public spaces to revitalize the waterfront, to help make the city a better place to live,” said Andrew Hilton of Waterfront Toronto. “These parks do that, by taking what was once dead space and turning it into active, animated spaces that are going to make the area more attractive to developers and people — and that’s exactly what’s happening.” Sugar Beach is more than just a nice space for people to enjoy, it’s also an iconic public place for the city. “Anyone just looking at the dollar cost of the umbrellas and the two large rocks is missing the point,” says Deputy Mayor Norm Kelly. “It’s the photographs of Sugar Beach that count. It’s all of that first-class investment that gets projected around the world and brands us, the city of Toronto, as world class and first class.”

“You have to look at the return,” explains project landscape architect Mr. Cormier, “the ‘Jackie Kennedy pink’ umbrellas are a unique addition to the city’s urban landscape. They’re elegant. They’re soft. It has a kind of a positive mood and we need positive moods in the city, otherwise everything is so the same.” 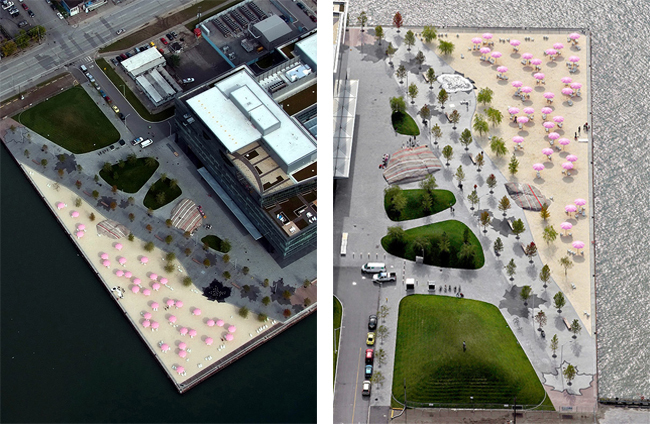 The three dozen, 2.5 meter high structures are a sculptural, functional, exemplary contribution to the city’s public realm. Yet because they happen to take the form of a simple beach brolly, they are being ridiculed. “Hilarious. I have some lovely pink and yellow striped umbrellas – only $11,000 each and fully installed. Please call me. Limited offer – best buy now,” states one sarcastic commenter. “How wonderful – year round patio umbrellas and a couple of coloured rocks,” remarks another bitter Torontonian.

Iconic public spaces must also be durable and that’s what these umbrellas are devised to be. Designed by Toronto-based industrial designer Andrew Jones, these are not your average beach parasols. They are constructed from fibreglass and stainless steel and they also function as light standards with LED fixtures and concrete footings. Expected to last 25-30 years, they are able to withstand gale-force winds, snowstorms and rust, and are even designed to minimise opportunities for vandalism. It might have been cheaper to buy standard beach umbrellas in the short-term, but they would need to be replaced every few years and would not be nearly as striking. High quality, enduring design costs money, but is worth the investment. 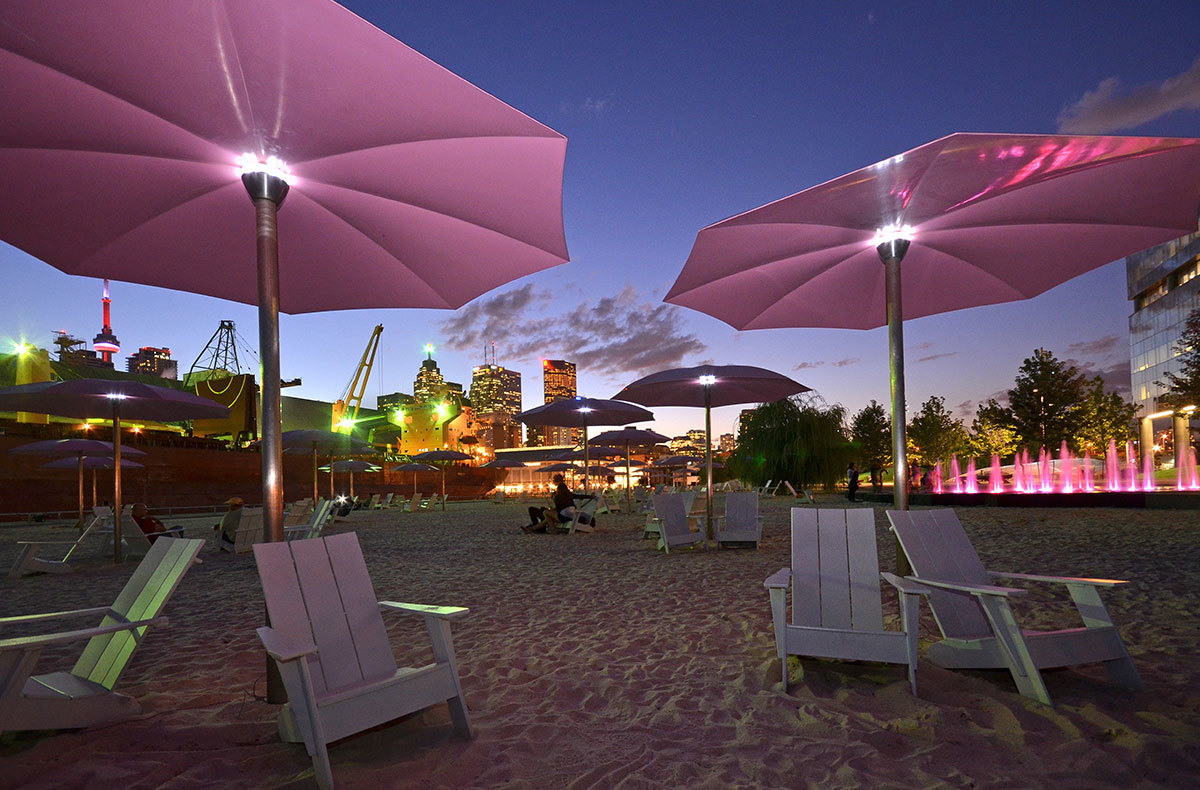 The total cost for the project was $14.1 million. On the face of it, this may sound like a lot but Waterfront Toronto says the project has already created $2.6-billion in development value along the water’s edge and has catalyzed a $9.6-billion growth in private sector development. 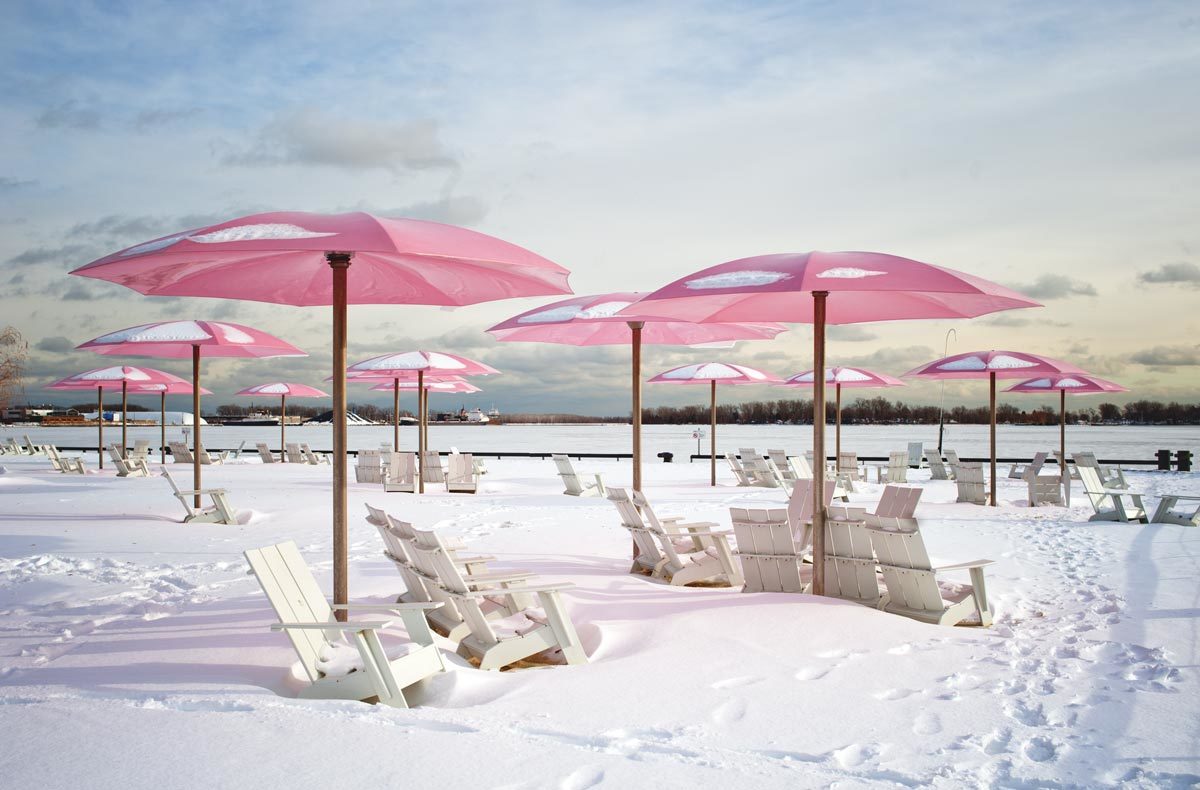 I have to admit, upon first seeing the figures, my eyes widened. But on further reflection, my viewpoint changed. I thought: well done, Toronto! Finally, a city prepared to invest serious money in high quality public spaces. Having worked on countless projects in which the landscape has been value-engineered to within an inch of its life, it’s refreshing to see a city that recognises the true value of landscape architecture and the power it has to change perceptions and generate future investment. 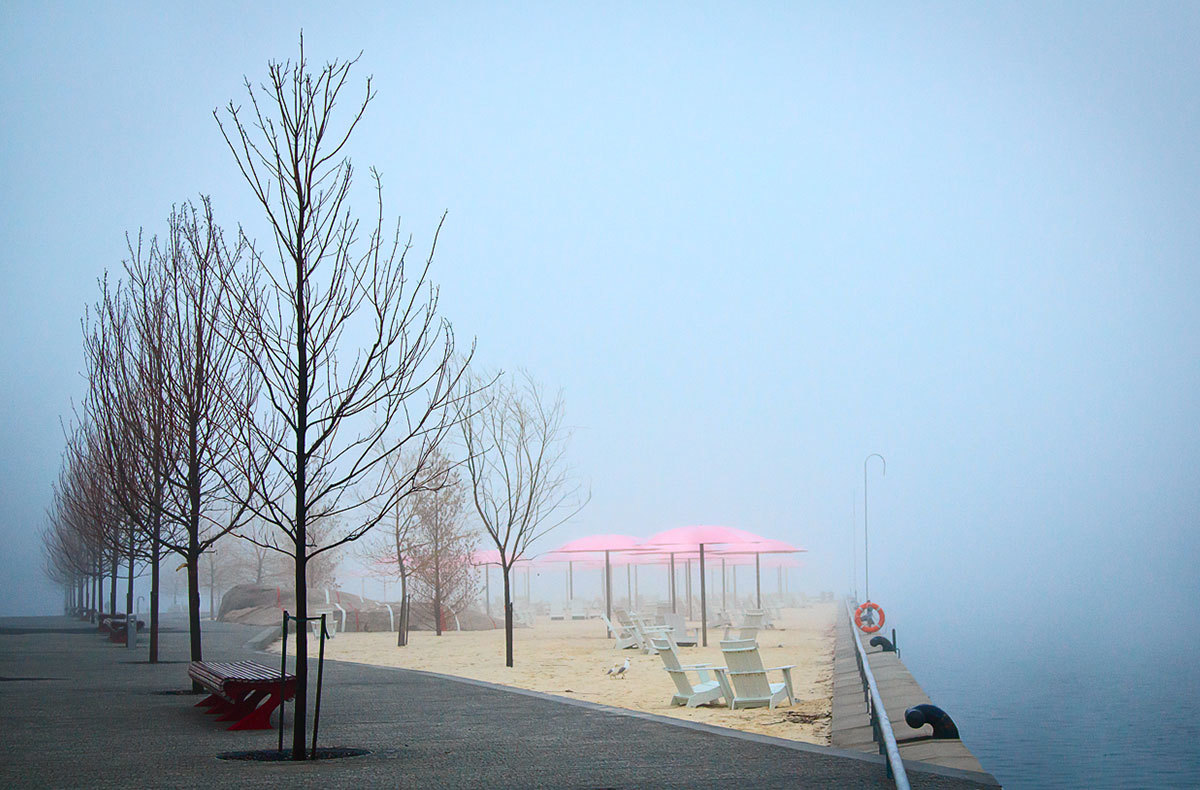 Landscape architecture is often an easy target for such critical remarks about frivolous spending because the value is not always easily quantifiable. Sugar Beach is a thriving public space that has changed people’s perceptions of a previously neglected area of the city. It is bringing people together, encouraging outdoor, healthy lifestyles and – most importantly – people love it! But it’s hard to put a dollar sign against such ‘soft’ values. After all, what is the price of love?

What do you think of Sugar Beach? A sweet deal? Or a gross over-expenditure?