Zamet Centre, by 3LHD, in  B. Vidas Street, Zamet, Rijeka, Croatia. Have you ever played handball? I did, but only as a child. So when I discovered that the project I am writing about played host to a handball championship, I was a bit surprised. I wondered, is handball the Croatian national sport? And then my mind went to the Olympic games and the large number of buildings that lose their sense after the event for which they were built is done, and I started to become distressed. But the more I read about Croatia’s Zamet Centre, the more astonished I became. When architecture speaks for itself and when it works — as it does in this case — it integrates into the environment in a very sharp way, satisfying many demands at once with a strategic multi-functionality. But let’s start from the very beginning: The city of Rijeka, nestled between the Adriatic Sea and the mountains, was asked to create a suitable environment for the world championship of handball in 2009. The Croatian office of 3LHD won the private competition for the sport and community center in Zamet, one of Rijeka’s quarters. 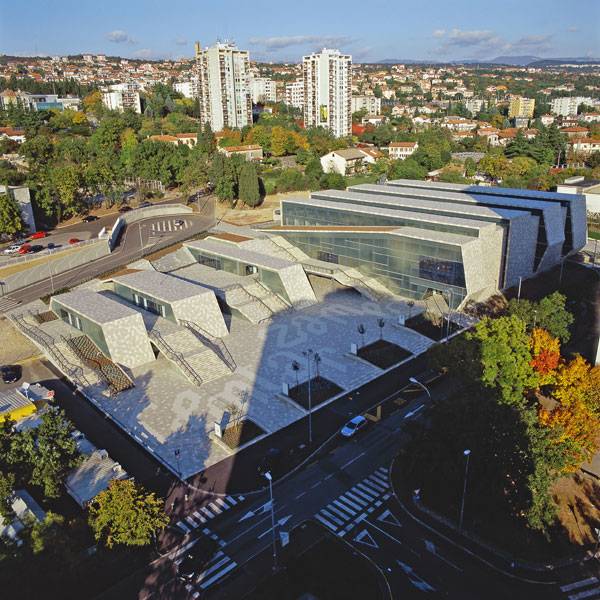 What happens when a strongly characterized building is added to a primarily residential neighborhood is that it becomes the very core of neighborhood life. In Zamet, the sports complex insinuated itself even more by providing a pedestrian path linking the neighborhood north to south, passing through the civic hub with its plaza, shops, local community offices, and civic center. The designers achieved their aim of giving a recreational aspect to the environment while at the same time creating other useful public spaces, including a public square, shops, a library, public offices, and underground parking. 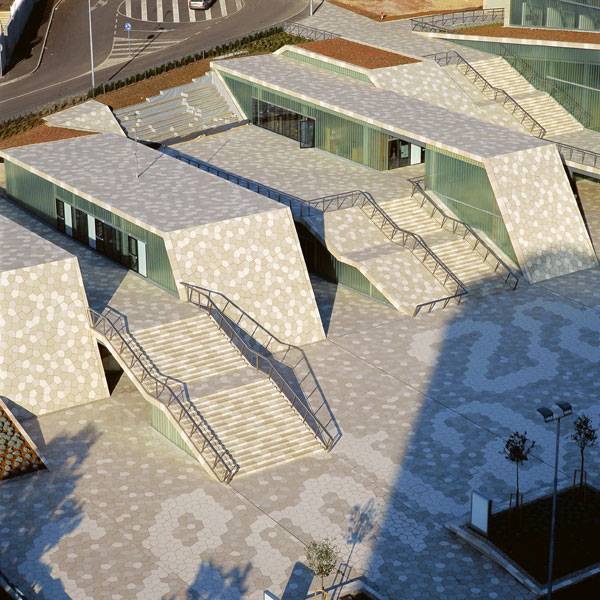 Generating a New Hub of Activity

The modern nature of the project gives a strong personality to a place that had lacked a real gathering place, links, and services. Moreover, it provides a welcoming space to play sports, attend concerts, and host all kinds of events. How can a square or a big building be in dialogue with the surrounding landscape without seeming to have been thrown in at random? 3LHD, winners of numerous awards for this project, were faced with the challenge of designing within a matrix that was mainly residential spread, dotted with a few isolated residential towers. 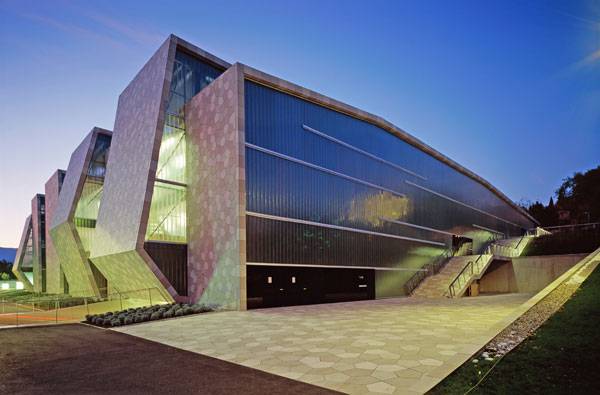 Where Does the Landscape End and the Building Begin

The main building was covered with stripes, running from north to south along the main building and the small shops and offices collateral to the square. These “ribbons” are the main piece of the project, taking on different turns; they play the game of turning roofing elements into flooring elements, staircases, paths, and green roof covers. 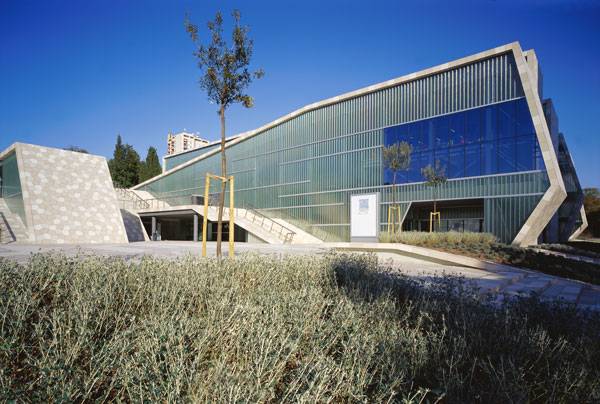 This great unity given by the game of the ribbons is taken up and amplified by the choice of materials used: The study has personally designed pentagonal porcelain tiles that reflect the nuances and geometry of the typical rock of the place (named gromača), improving in this way the game and the movement created by the surfaces and recalling the identity of the place through the use of local materials.

Working With the Slope to Create the Space

The square plays between gradients and the natural and the artificial, and determines the zero plane of connection among the road to the south, the commercial activities, the sports hall, and the connections to the school and the park situated to the north. The intervention is exceptional in its kind; it does not distort the place, but completes it. The skilled group of architects precisely transformed what was once the biggest problem of the place –the slope — into the main force element. 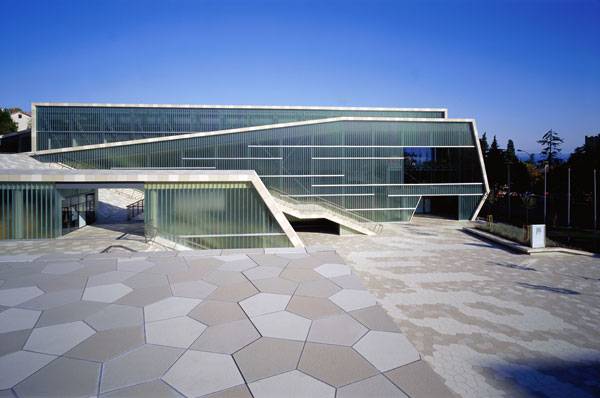 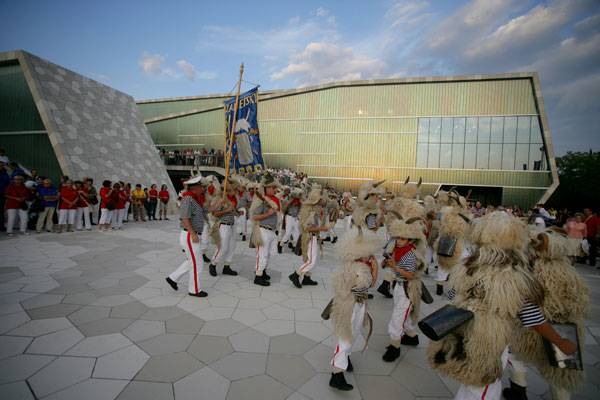 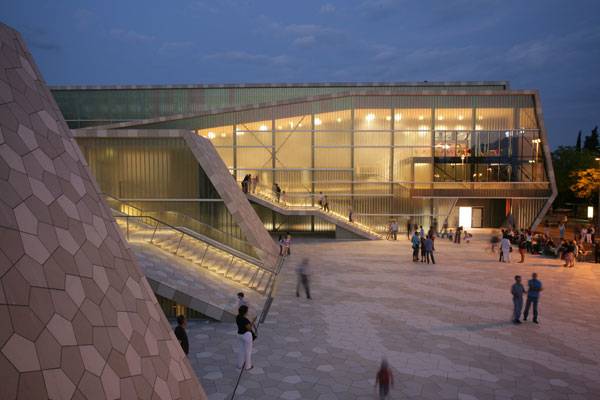 By seizing the genius loci, following the contours of the ground, and playing with volumes and materials, the architects were able to achieve a balanced outcome, from the point of both design and functionality. They have created a place accessible not only for exceptional events, but for everyday life, proving once again how landscape architecture can make a contribution to the search for identity of marginal places that hardly talk to each other, giving an added value where standardized and overcrowded buildings so often punctuate our cities. 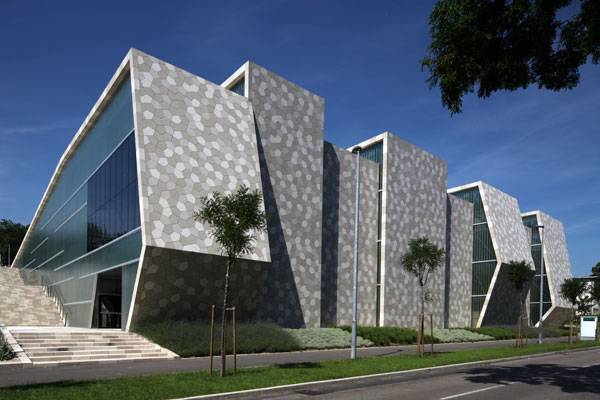