Throughout history, rain has been seen as an antagonist to the developed landscape. Civilizations in the Indus Valley region had developed sewers well before 2,000 BC, and sewers appeared in Roman settlements as early as the second century. Since then, society has aimed to control stormwater on developed land and remove it as quickly as possible. This strategy has yielded massively expensive infrastructure, frequently overloaded systems, depleted aquifers, and degraded water quality. Only the modern era—with the advent of environmentalism and sustainability—has brought about a revolution in the way that society deals with water, yet at the residential level traditional views persist.  Sometimes the fault lies with the client, but often it is the fault of the designer. Let’s examine a number of misconceptions made by designers in environmentally-conscious stormwater management.

Permeable pavements are not without limits. Water does not endlessly disappear into the ground below.  Eventually, the subgrade becomes saturated, the sub-base holds water as it is designed to do, and the pavement floods when there is no place for the water to go. For this reason, understanding on-site soils is critical. Sandy soils will infiltrate quickly and be less likely to flood. Clay-type soils will not infiltrate water quickly and need an alternate way to drain: an under-drain or an over-drain. These drains must outflow to an existing detention basin or stormwater sewer, depending on the infiltration goals of the project. Without sub-surface drainage, the flooding of the pavement could become dangerous. These permeable pavers that are flooded, not clogged.  The base and subsoil below are saturated with water. Image credit: University of Louisville, Center for Infrastructure Research

Disconnecting downspouts from sewer connections is one of the best strategies in responsible stormwater management. Traditional methods try to get rid of every drop of rainfall as quickly as possible, generally via the storm sewer. Disconnecting downspouts reduces strain on storm sewers and produces a number of benefits: It reduces the risk of CSO discharge; it prevents clean, non-potable water from being unnecessarily processed at a water treatment plant; and it increases overland infiltration, cleansing runoff and replenishing groundwater. When disconnecting downspouts, drain pipe is commonly used to move runoff safely away from a house. As the water reaches the end of the pipe, it spills out from the emitter. Many designers fail to account that these systems rely on gravity to discharge the water. A solid pipe cannot release the water at its low point, which is typically underground. Water will only be released when the water level in the pipe rises above the emitter’s rim. Pipes can become clogged with debris, and sitting water can freeze and block the pipe. Two elements are needed to prevent these problems: a perforated outflow and a secondary vent. A perforated outflow allows water stuck at the low end of the pipe to bleed out over time. A secondary vent allows water to escape in the event that the main vent becomes blocked by frozen water or debris. Its invert must be above the rim of the main outflow.

Technically, perforated pipes do carry water. The perforations, however, nearly eliminate the pipe’s capacity to transmit water unless the ground surrounding the pipe is saturated with water. Perforated pipe effectively has one of two functions: collect groundwater or release it. It can only ever perform one of these functions at a time. I have seen designs proposing to collect water via inlet and send it through perforated pipe behind a wall before the outflow. If the design were built, the wall would not last long because of the additional water that would be introduced behind the wall. Perforated pipe should either be placed as a collector at the beginning of a pipe system or as a dispersion method at the end of the system. The basic assembly of a French drain: perforated pipe and uniformly graded aggregate.  Note the missing layer of fabric to prevent soil from migrating into the aggregate. Via Wikipedia, Public Domain

Many times I have seen landscape architects, architects, and contractors treat French drains as inexhaustible dumping grounds for stormwater. French drains, however, are merely underground detention. Their capacity is limited and limited further by the aggregate fill. Only the void space contributes to the actual storage volume. Uniform graded gravel has a maximum void space of 40%, meaning at best only 60% of a French drain can be used for water storage. If high volumes of storage are needed, consider a cistern or other structure that has nearly 100% storage volume. Another common mistake is not to provide a release for stormwater once the system is full. The result is water flooding out of downspouts and inlets, frequently next to the foundation and without an escape route. Consider the contributing watershed, the design storm event, and secondary drainage routes when designing stormwater storage. 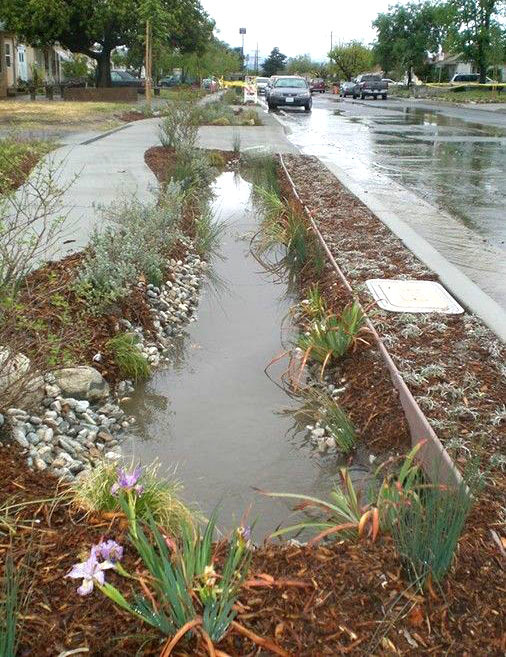 This rain garden in a residential parkway is linked to others along the same street in Los Angeles. Image credit: Council for Watershed Health

No backup plan for a rain garden means that a temporary pond will inevitably appear. When it comes down to it, rain gardens—like French drains—are simply small scale storage and infiltration tools. They can accommodate a finite volume of water. In small rain events, rain gardens will handle every drop of stormwater, but large rain events will quickly exceed their ability to infiltrate and store. Approaches to take are linking multiple rain gardens together, connecting them to a detention basin or riparian corridor, and even allowing them to drain to municipal storm sewers if infiltration goals have been met.

No stormwater management technique is a one-size-fits-all solution. Storage capacities, infiltration rates, climate, contributing watershed, and receiving watershed must be considered. Landscape architects in the residential sector must design in accordance to these factors. When they do, benefits will be tangibly understood. The Smart Home at the Chicago Museum of Science and Industry was developed as a successful case study in 2008. It captures and infiltrates over 208,000 gallons of stormwater a year by a combination of permeable pavements and bioretention gardens to prevent the runoff from entering the storm sewer system. As more projects seek the same level of holistic treatment, environmentally-conscious stormwater management best practices will become more effective, and the views of clients and designers alike will change.