Article by Paul McAtomney Urbanization of Historical Downtown Ripoll, by Comas-Pont Arquitectes, in Ripoll (Girona), Spain.  Historically and culturally significant urban environments offer a myriad of challenges for the landscape architect. How does one intervene while retaining the fundamental characteristics — be they physical, cultural, or social — of a place? How does one link past traces of a site with an artful telling of the landscape for future urban life? These were the questions asked of architectural duo Jordi Comas and Anna Pont, coalescing to form Comas-Pont Arquitectes, when charged with the reurbanization and pedestrianization of the historical center of the industrial mountain town of Ripoll, which sits 100 kilometers north of Barcelona in the Catalan region of Ripollés, Spain. 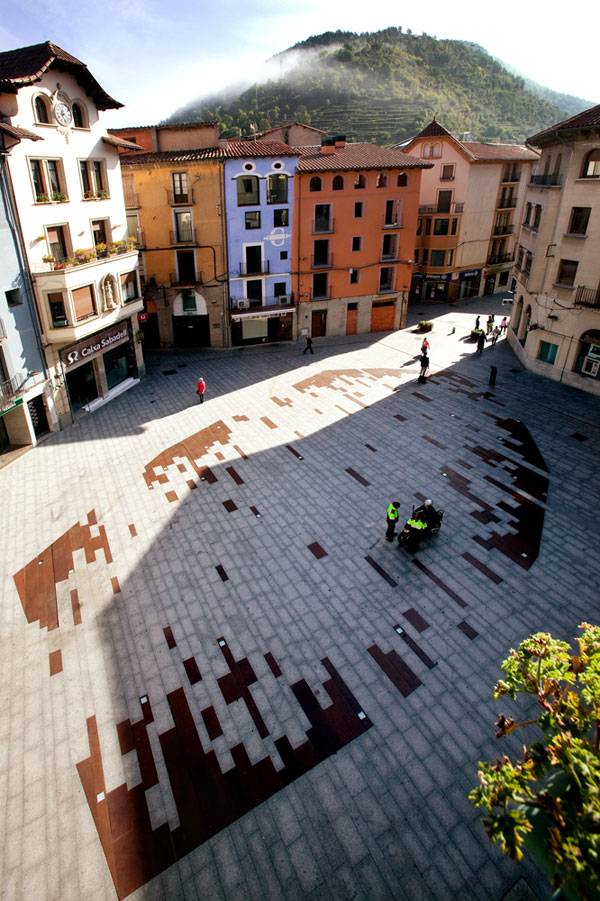 Sliced by the rivers Ter and Freser and girdled by the Pyrenees, Ripoll was once a cultural and industrial nexus between the ninth and 19th centuries, boasting a powerhouse metallurgic and textile industry due to an abundance of natural resources. Now a busy commercial center, the capital of Ripollés owes its fame in large part to the Benedictine monastery of Santa María. Giving the Landscape Back to the Pedestrians Over the years, Ripoll’s historical center has been subject to pedestrianization through a number of isolated design schemes, both in terms of ideas and materials. Together, the two squares of plaça de Sant Eudald and plaça Gran form the historical core of Ripoll, the center of the city’s old town area, and the site of intervention. 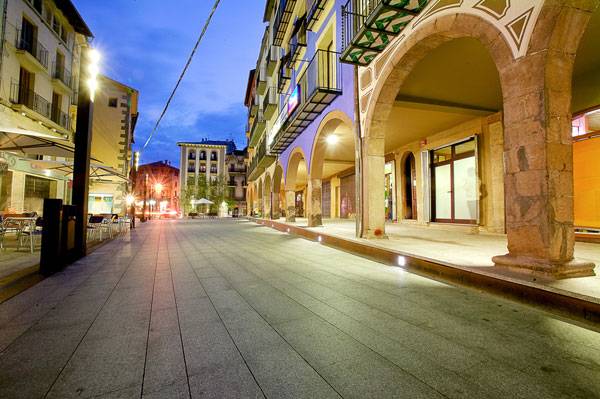 Goals of the Project The driver for the design of Ripoll’s historical center is based on extending and improving the quality of pedestrian zones, commercial revitalization of ground-floor frontages, and the public activation of space. Comas-Pont strategized two key conceptual ideas — to place emphasis on plaça de Sant Eudald as the main village square and to reconceptualize plaça Gran as an avenue rather than a square due to its linear spatial structure and geometry. 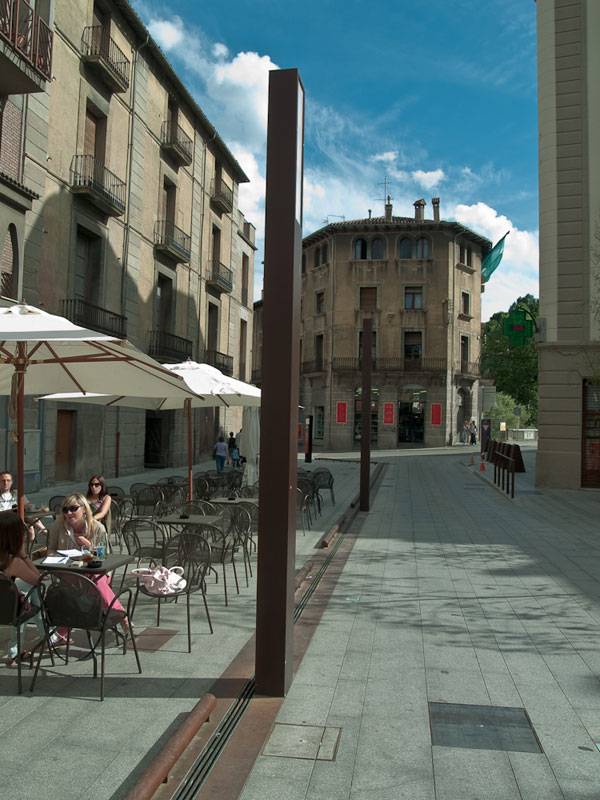 Plaça de Sant Eudald is named after the town’s patron saint, with a church once standing in the square dedicated to the priest and martyr. The church was demolished during the Spanish Civil War. Actions Taken by the Design Team The designers relinquished the square of furniture and objects to facilitate an unprogrammed space that can take on a variety of uses — an essential element of any public square. Furthermore, the designers recognized the historical and material layers on site through the reconstruction of the church’s footprint and perimeter, using Cor-ten steel juxtaposed against natural granite stone pavement. In doing so, Comas-Pont deftly expressed their deep reading of the site. 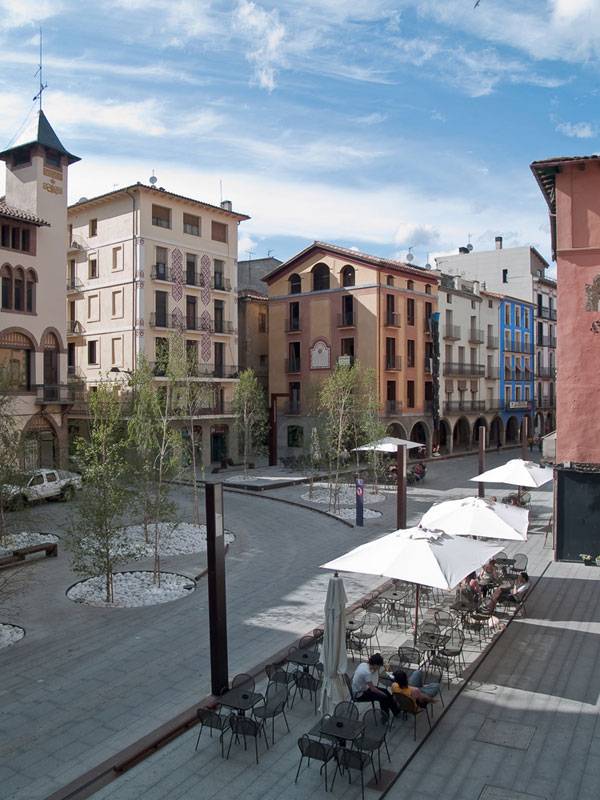 Merging Features to Produce a Complete Harmonious Design Conceived as an avenue, plaça Gran, akin to plaça de Sant Eudald, is organized through material choice. Reinforcing the linearity of the space, a continuous Cor-ten steel element that seemingly protrudes out of the ground plane forms urban furniture and lighting fixtures before returning to grade to form a drainage system running the length of plaça Gran. This acts as an axial organizing element through the site and provides visual and spatial continuity. 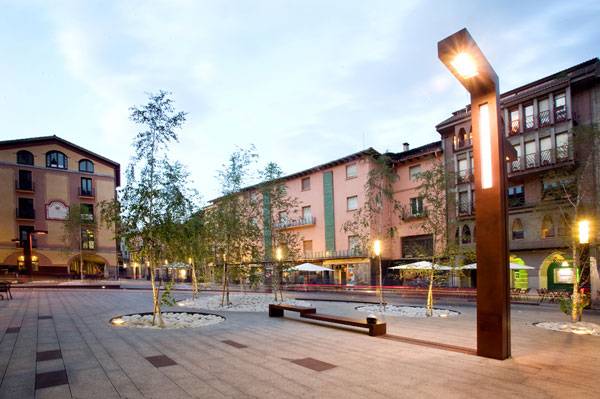 Using Trees to Create Space and Boundries The uniformity of the space is further emphasized by using the same paving throughout the square. Vehicle access and pedestrian space are instead demarcated primarily through a Birch plantation, providing a soft, vegetal threshold that also spatially defines another smaller rest zone. The use of Birch trees adds a delicate touch to the granitic quality of the urban landscape, as does the introduction of new materiality in the form of white stone placed around each tree’s trunk flare. A Look Back at the Materials Used As you have probably guessed by now, Comas-Pont’s material palette is modest, clean, and precise. Exactly the way it ought to be for a site of this nature. 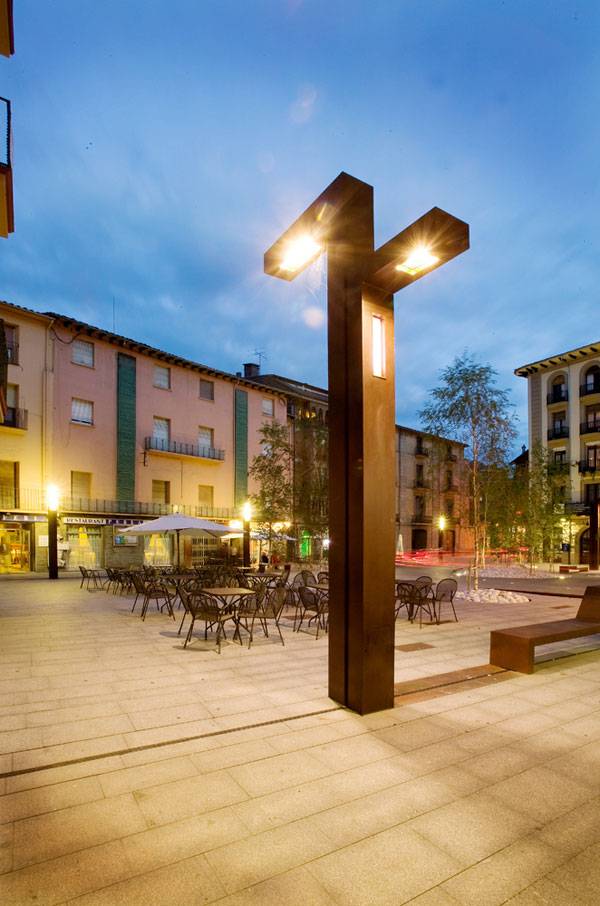 The designers conceived two “skins”. The primary skin is the natural granite paving, consolidating the overall landscape scheme into a unified whole. These granite stone pavers are collocated “a la Romana”, meaning “in the Roman way” — equating to three different paver widths and an emphasis on the longitudinal joints, in turn delineating the pedestrian system from the surrounding street grid and inviting pedestrians to meander and stroll. 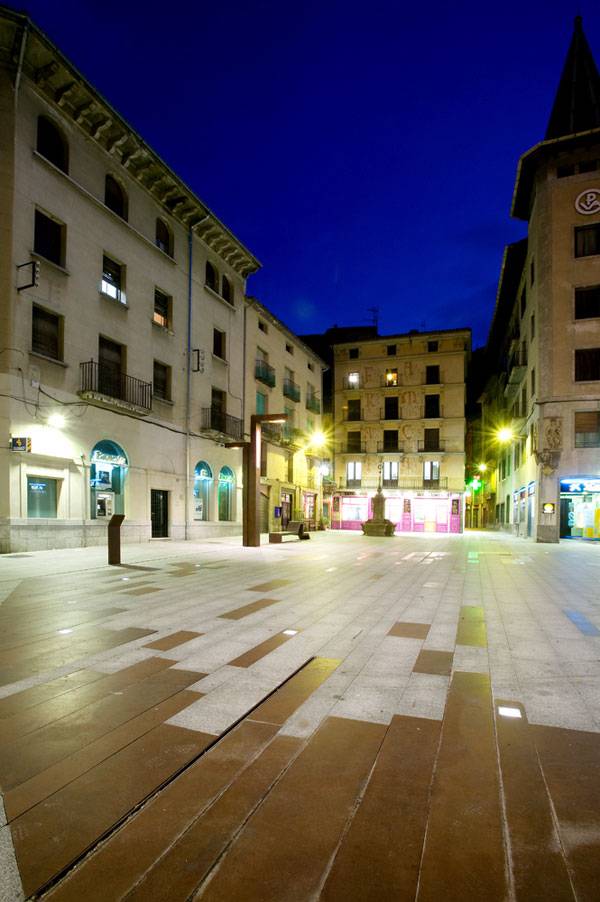 The aforementioned Cor-ten steel is used as a second skin to identify the church perimeter, urban furniture, lighting fixtures, and rest zones. With its earthy tones and rich patina, weathering steel was chosen for two reasons: To evoke Ripoll’s important past and historical ties to the metallurgic industry in Catalonia, and secondly, to cohesively meld with the paving design of the adjacent plaça de la Lira Theatre Public Domain that gives new life to a void left by the demolition of an old theater. 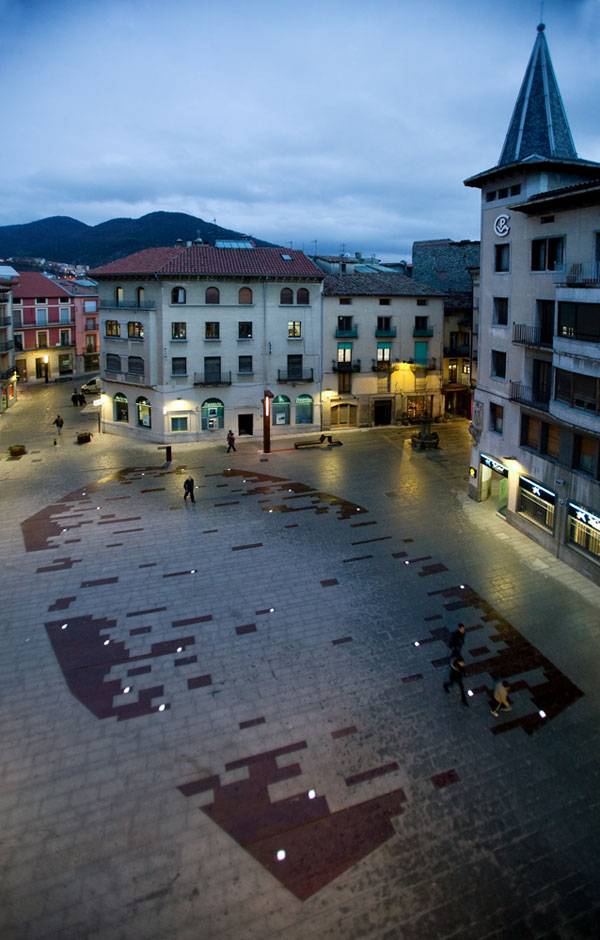 Lighting in the Design Lighting in the design is allocated according to spatial character. The avenue contains lineal street lamps, more sculptural lighting fixtures in the stay/rest zones, and hanging lamps for the streets. The reconstruction of the church’s footprint is accentuated through in-pavement LEDs, delicately illuminating the square with the help of gleaming, ground-floor shop frontages. By acknowledging the site’s thick historical connections, its position as the nexus of Ripoll, and its context, Comas-Pont has recovered plaça de Sant Eudald and plaça Gran for public activation and use. The city’s two historical spaces now read as a cohesive, pedestrianized urban landscape and set the stage for the spectacle of urban life to come. What do you think of this project? Let us know in the comments section below! Go to comments 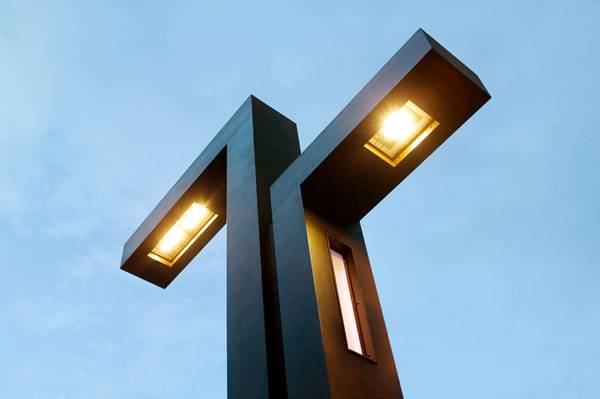 Full Project Credits For The Urbanization of Historical Downtown Ripoll: