Also known as clean graffiti, reverse graffiti is essentially the act of removing dirt or dust from dirty surfaces in order to form an image or text. This act can be done from using your own little finger to write ‘clean me’ on that van you can see, to a using a cloth on a wall, or in some cases a high power washer for those works on a grander scale. Reverse graffiti, operates within what most people call ‘a legal grey area.’ That is to say, the act of cleaning something isn’t illegal but that it results in creating an image on someone else’s property means it may be seen as trespassing.

Reverse graffiti getting the message out; image credit: GreenGraffiti

Moreover, whilst cleaning walls is not illegal, using this method as a form of advertising may be. Recently reverse graffiti has been commandeered by the advertising industry. In most places you must have a license to advertise in a public space, hence the fact that clean graffiti is seen to function in this legal ‘grey area.’ Environmental Activism Generally, the father of Clean Graffiti is seen as one Paul Curtis, aka ‘Moose’ Moose himself has done both personal clean graffiti and ‘official’ work for advertising agencies but also for companies in the UK such as Transport for London. He’s even worked for the British police on an anti-gun campaign. Below: Moose in Belgrade As reverse graffiti is temporary, biodegradable and uses nothing to really impair or cause a negative impact on a surface, it is seen as an environmentally friendly work of art (in contrast to more traditional forms of graffiti) and is one of the reasons it has been adopted so readily by guerilla marketing agencies. Moose himself says “it is an act of refacing not defacing”. Another prominent mover and shaker is Brazilian street artist Alexandre Orion. José de Souza Martins, Professor of Sociology at São Paulo , University, comments that the signature skulls of Orion’s work are a type of memento mori regarding our relationship with pollution. Art or Vandalism? 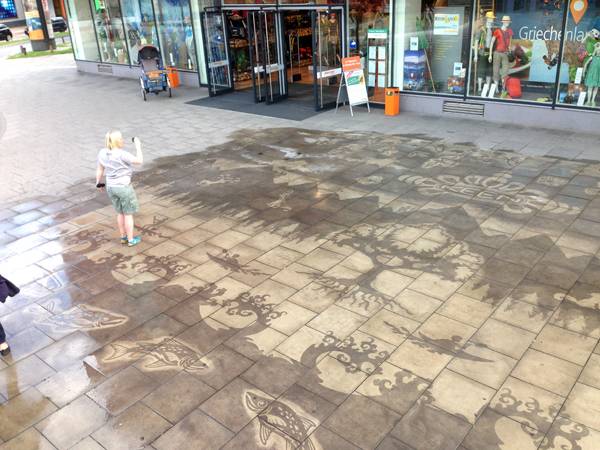 As mentioned, what is often seen to be illegal about reverse graffiti is its use by media agencies to advertise particular companies, campaigns and products. Gaining a license to advertise inevitably legitimizes the graffiti. In certain places it is still frowned upon, and in some areas, municipal powers adamantly regard it as illegal – not even allowing licenses for advertising agencies. So what about personal, non-commissioned reverse graffiti? As with, ‘traditional graffiti’, that is to say tags, throw ups (larger tags), and sentences or words, it begs the question, is it art or vandalism? The first reactions to ‘traditional’ graffiti by the general public where overwhelmingly negative – and often still are. In 1996 Tim Cresswell  argued that reactions to graffiti were negative because they represented dirt, which we don’t like. Dirt turns up in unwanted places and so does graffiti. As such it is a threat to order. 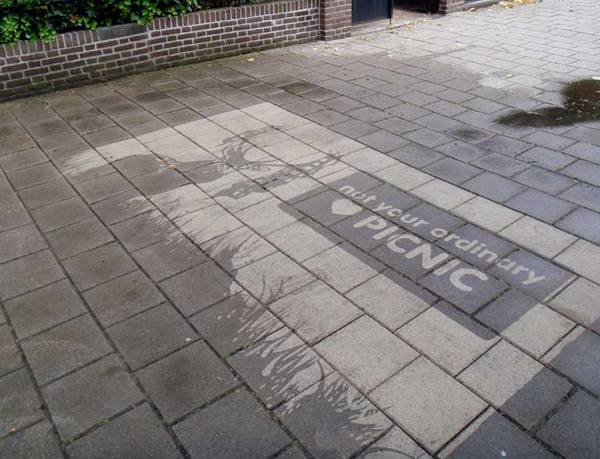 Is it art or is it vandalism?; credit: GreenGraffiti

Hold on you say, reverse graffiti is about cleaning not being dirty. It’s the opposite! Yet it may still be seen as a threat to order because the act is undertaken without authorization from official channels. Reverse graffiti refuses to comply with the perceived rules of an urban space. Herein lays its illegality and thus it is, technically, vandalism. But that is not to say it’s not art. 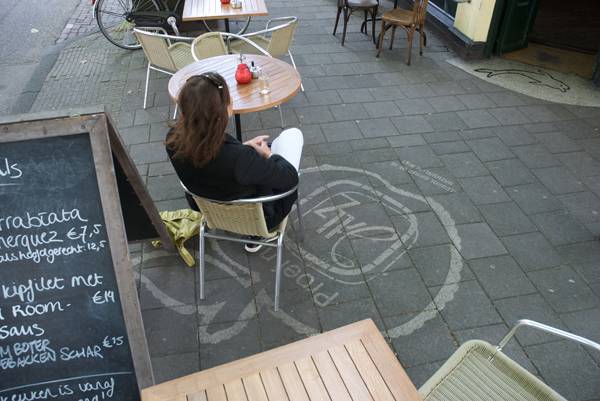 Would you try this clever advertising method; credit: GreenGraffiti

Indeed, if we take a look at the history of art, most new movements have been seen as; radical, corrupting, degenerate, vandalistic, hedonistic and so on. Yet invariably, no one would now argue Vincent Van Gogh (famously never sold a painting in his lifetime) did nothing for art, or moreover, the society which holds that art dear. Likewise, few people will say that the recent destruction of 5 Pointz passed without a murmur or that its establishment failed to contribute to art, society or New York’s history. At the end of the day reverse graffiti – like its wider family: street art, graffiti, living graffiti and subtraction graffiti – calls into question the dialectic between public and private space and raises questions about how places become what they are and who says what they can be. Whose cityscape is it anyway? What’s more detrimental to your streetscape? A piece of attractive but non-commissioned art, or a dirty grey wall? Check out GreenGraffiti® Presentation and learn more.. Article written by Sonia Jackett Images courtesy of GreenGraffiti  Published in Blog