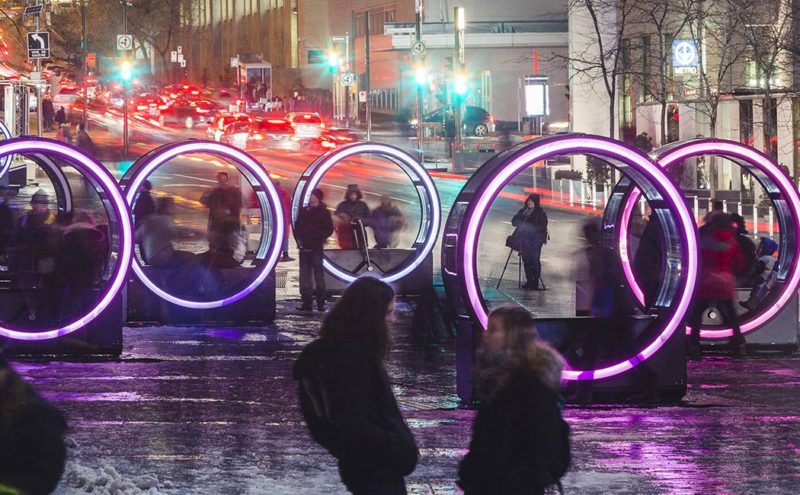 Article by Ophelia Yuting Ji – A review of the Loop light installation, by Olivier Girouard, Jonathan Villeneuve, and Ottoblix, in Montréal, Québec, Canada. When we think about a city’s landscape, we often picture rivers, parks, neighborhoods, and downtown streets shining beneath the beautiful light of the sun. But what about the city’s nighttime landscape? The nighttime view and the daytime view can be astonishingly different. When the natural landscape fades from view in the night, the infrastructural landscape created by people takes center stage, often providing a charming atmosphere framing the energetic activities going on under the moonlight and artificial lighting. The relationships among infrastructure, public spaces, and people are redefined in the starry night. 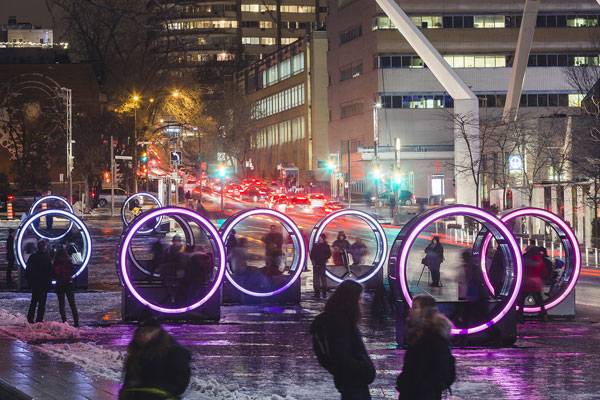 Ideally, well designed and considerate city infrastructures have the opportunity to not only serve as secondary companions to assist us in our daily – and nightly — activities, but to actually become the center of our lives, engaging us in a city’s public spaces. Visitors are not just the audiences of the spaces constructed by designers, but participants in the spaces, making them “public.” 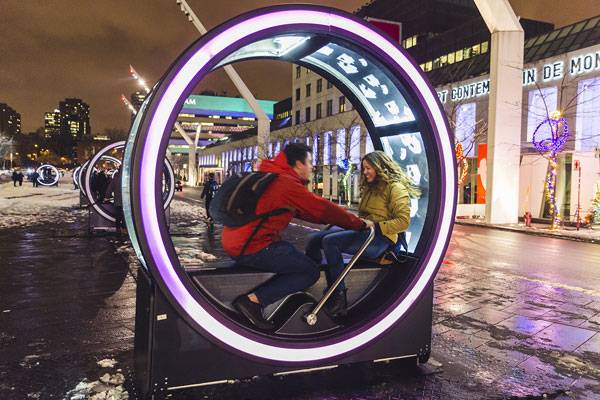 The installation called Loop brought the above expectation amazingly to life on Place des Festivals, in Montréal’s cultural center — the Quartier des Spectacles. From Dec. 8, 2016, to Jan. 29, 2017, this installation by artists Olivier Girouard and Jonathan Villeneuve with Ottoblix, produced by Ekumen and the Quartier des Spectacles Partnership, showed tourists a fairytale wonderland through the interactive installations of 13 giant animated wheels. Each of the wheels was like a zoetrope. When visitors pump-powered the machines, the cylinders started to spin, the lights lit up, and the images became animated, putting the whole story in front of the participants and creating a new way to experience the night. WATCH >>> The 7th edition of Luminothérapie about Loop in 30 seconds:

According to the Quartier des Spectacles Partnership, each of these 13 zoetropes featured a different fairytale, each with 24 images. These fairytales included familiar childhood staples such as the frog prince and the three little pigs, shown mainly through black and white images as a reflection of memory. After three months of design work, 800 hours of assembly, 115 kg of screws, the help of 20 suppliers throughout Quebec, the elbow grease of 15 dedicated volunteers, and contributions from Generique Design, Jérôme Roy, and Thomas Ouellet Fredericks, the project was brought to life. 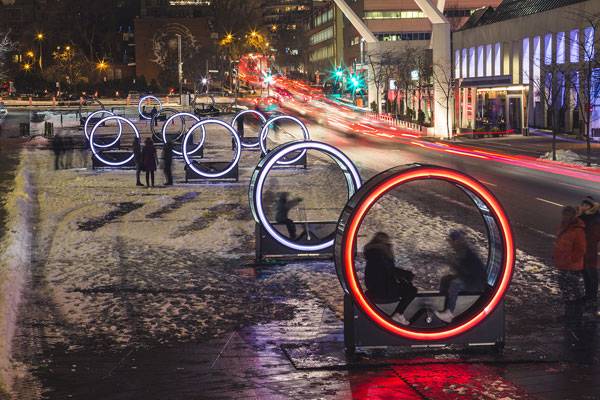 The biggest installation featured in the annual winter art event Luminothérapie, it evolved into a collective re-imagination of the night streetscape within the city’s busy cultural center. It was a machinery experiment that called not only for designers, artists, and engineers to get involved, but also the whole public, which was needed to complete it with their active participation. All of these efforts were condensed into a fantastic project that gave participants the full ability to manipulate the push-cars and to make the story unfold for their own entertainment, as well as for those seeing the projections on the surrounding buildings — UQAM’s Pavillon Président-Kennedy and the new Wilder Building Espace Danse. 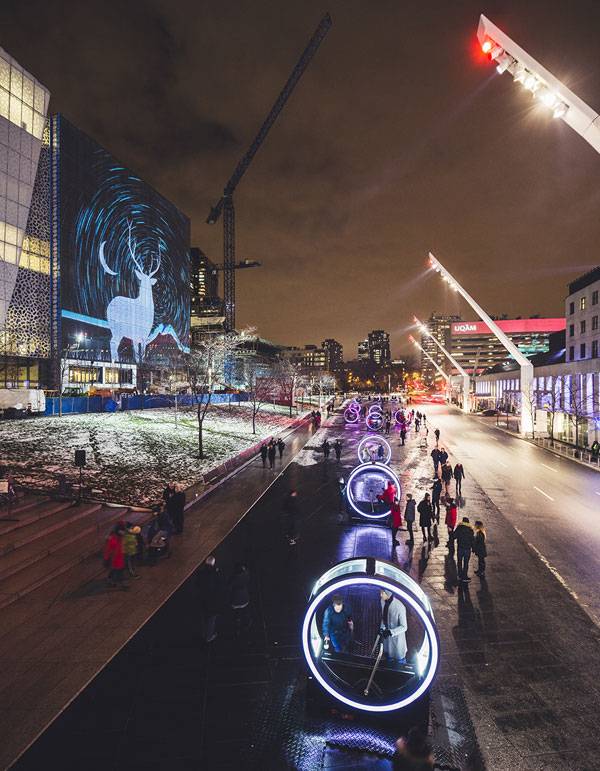 Two architectural video projections were installed on the site by Ottoblix. In this way, the artwork was connected to the surrounding context of the modern buildings as one part of the contemporary urban fabric, and other pedestrians simply walking by could also have the chance to enjoy dreaming in this wonderland. How fast each story was told totally depended on the speed with which the participants were spinning the machines. With the music and flashing lights on the periphery of these giant wheels, a mysterious world among the noisy business streetscape opened up a brand new door. 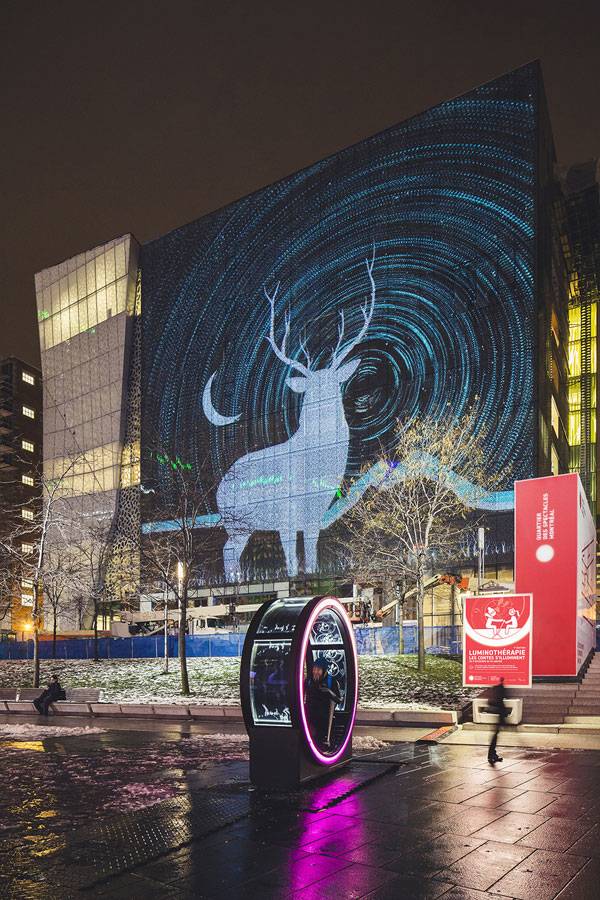 According to interviews with the artists conducted by the Quartier des Spectacles Partnership, the idea of the zoetrope was inspired by a trip Jonathan Villenueve made to the Berlin Technology Museum. He was impressed with a zoetrope he saw in the museum that animates images by spinning a cylinder. So then he and Olivier Girouard decided to make a vertical zoetrope, which would be not only participatory, but also collaborative. In their minds, this hybrid machine and art installation was like a three-headed beast – a Chimera with all of these music box, zoetrope, and push-car ideas. 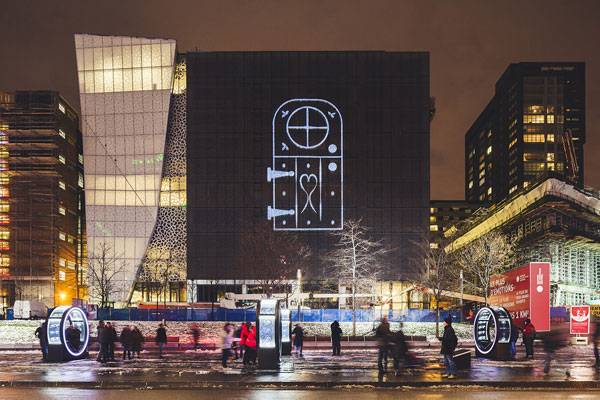 This loosely defined hybrid turned out to be something that the public really enjoyed. In the artists’ opinion, a successful project such as this means more appreciation by the public. “It will be interesting to see how each person responds, but in any case we want to stimulate everyone’s imagination and encourage all to participate, helping people see public space differently. Loop looks simple, but it is technically complex,” the artists said. Instructions on how to manipulate the machines were provided along the street. These joyful scenarios were an extraordinary example of how public space can be redefined for the public, not as objects but as incubators to stimulate creativity and passion from every person. 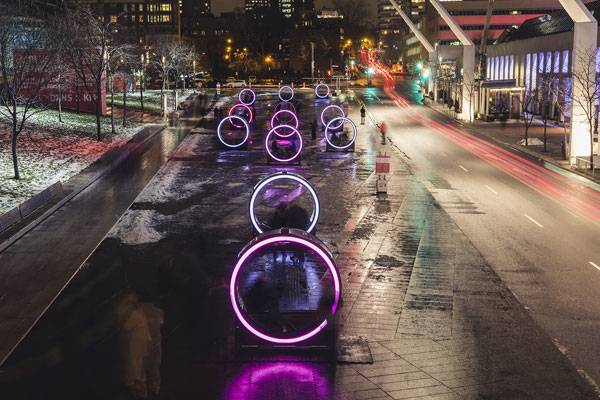 It was about inspiration, innovation, and interaction. It was about the future of public landscape, with the help of digital tools and by engaging the existing contextual urban fabric as well as the memory of the city. As Jonathan Vlleneuve said: “The Place des Festivals is part of a worldwide network of major public spaces. Working outside museums and galleries gives us the opportunity to think differently and reach different audiences – people who want to have their daily routine punctuated by something extraordinary. Our job is to give them something that’s both meaningful and astonishing.” 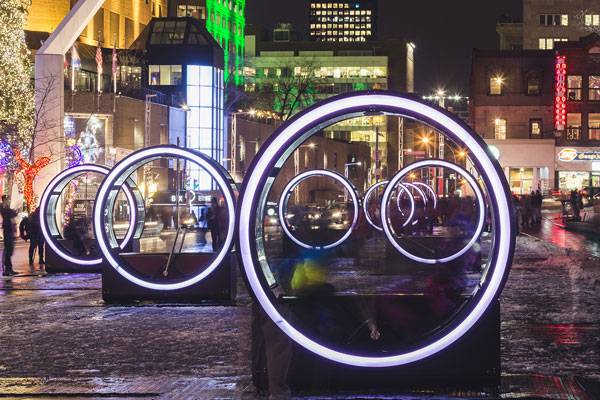 So what do you think a cityscape in the night should look like? How would you imagine the infrastructure of the city in the future? Do you ever re-imagine any public spaces around you that could be better with some innovative ideas? These are not just questions for artists or landscape architects; they are also questions for the public at large. 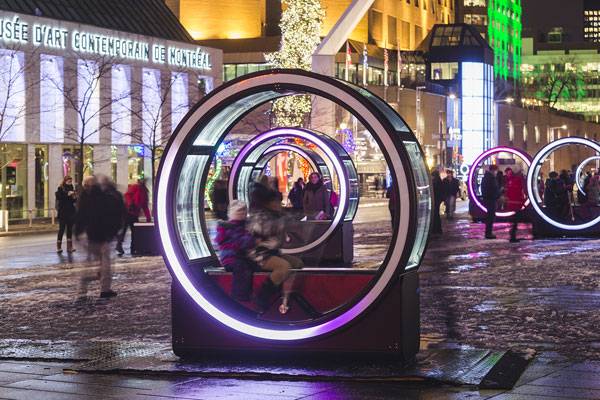