20-Mar-2017 – Latest News Landscape Architecture March by Brett Lezon | Edition No. 4 out of 4 In this week’s Latest News in Landscape Architecture we highlight the winners announced to redesign St Jose’s Park. We will also look into how BIG’s looping station design in Paris turns bridge into public space. And have you seen the bold proposal for the new bike bridge connecting Miami to Key Biscayne? Additionally, we showcase a book, Landscrapers, which is said to be “an introductory historical survey on the many and creative ways humans have fought for and against the earth beneath our feet, merging man-made forms with the contours of the land”. And don’t forget to check out the YouTube tutorial of the week, you’ll end up “wowing” your teacher or your boss with your new skills in making Landscape Architecture diagrams.

10 of the Best Stories in This Week’s Latest News Landscape Architecture:

A design team made up of San Francisco–based CMG Landscape Architecture, Future Cities Lab, Page & Turnbull Architects, and ARUP engineers has been awarded a contract to rehabilitate San Jose, California’s historic St. James Park. The City of San Jose held a national competition to redesign the neglected park back in 2016 with the aim of reintegrating and modernizing the city’s largest, most urban recreation space. The competition’s top four entries included competing submissions lead by New York City–based !Melk, Berkeley, California–based Meyer + Silberberg, and Philadelphia-based WRT. In a press release touting the winning commission, Nataly Gattegno and Jason Kelly Johnson of Future Cities lab said, “We designed the pavilion to be an open and illuminated space seamlessly integrated with the park. We want to encourage neighbors to stroll through the colonnades and interact with the pavilion day and night,” adding, “When there is a scheduled event, the pavilion will transform into a high-tech performance venue with superb acoustics and lighting.”

Danish firm Bjarke Ingels Group and French Studio Silvio D’ascia Architecture unveiled new rendering of their competition-winning designs for a loop-shaped metro station in Paris. “The Gare du Pont de Bondy continues the Parisian tradition of utilizing bridges as social spaces and cultural landmarks. Located at the encounter between the communities of Bondy, Bobigny and Noisy-le-Sec, the station is conceived as both bridge and tunnel wrapped around a giant atrium, connecting the riverbank to the train landing,” said BIG. “The deepest train tunnels will now open directly to the Parisian sky, and all three surrounding neighborhoods will be united in a single inclusive loop—a new architectural hybrid of urban infrastructure and social space.” The stations and lines of the Grand Paris Express and expected to open before 2030. 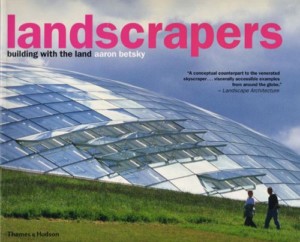 Landscrapers: Building with the Land. Get it HERE!

“An introductory historical survey on the many and creative ways humans have fought for and against the earth beneath our feet…reveals an architecture that reads the text and texture of the land in three dimensions.” “Developments in structural engineering have made it possible to engage the earth’s surface as a building element. With an increased awareness of the planet’s limited natural resources and with landscape architects exerting ever-greater influence on contemporary design, architects around the world are building into the earth, merging man-made forms with the contours of the land”.

A new exhibit at the Coral Gables Museum is now on view, providing a deeper look into “Plan Z for Miami,” a proposal to create a snaking elevated platform that would provide pedestrians and cyclists with safer passage from Miami to nearby Virginia Key and Key Biscayne. The existing Rickenbacker Causeway has seen four fatal cycling accidents since 2006, spurring many cyclists to push for better bike lanes and barriers to protect them from the high-speed traffic on the bridge. Architect, urban planner, and lifelong cyclist Bernard Zyscovich saw an opportunity to promote cycling as a more viable means of transportation in Miami and launched Plan Z for Miami. The exhibit, titled Plan Z for Miami: From Infrastructure to Open Space, will be on view through May 14, 2017, at the Coral Gables Museum. For more information about the exhibit, visit the Museum’s website here. WATCH >>> Repurposing Rickenbacker Causeway to Rickenbacker Park – Plan Z for Miami

– For all of the latest news in Landscape Architecture continue to follow us on Facebook and Twitter. Do you have news to share? Send to office@landarchs.com News report by Irene Crowo Nielsen Return to Homepage