Lucky Coin by 100architects, in Hong Kong, China.  Is it possible on a limited urban site to create a multifunctional space, which provides not only various activities, but also represents a symbol of local culture? Lucky Coin, designed by 100Architects -studio, which focuses on street architecture and urban interventions, gives some intriguing answers. Hong Kong is one of the most densely populated areas in the world. A massive increase in population and a limited urban territory require the land use to be planned especially carefully. The Lucky Coin is located on the south coast of Kowloon, from which the dramatic sky line of Hong Kong Island can be appreciated. The site is situated close to the Hong Kong Cultural Centre, the Hong Kong Space Museum and the Hong Kong Museum of Arts. 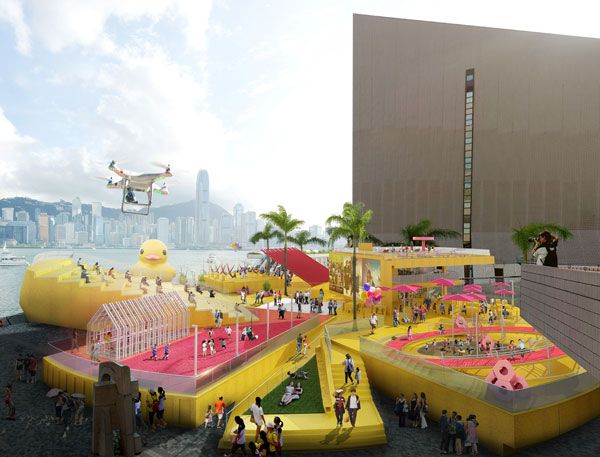 The Lucky Coin includes 10 platforms, which serve different functions and activities. The platforms are mainly constructed of colored concrete, wood, and rubber. Additionally some other elements such as sand, grass, and trees also help to establish the individual identities of the platforms. 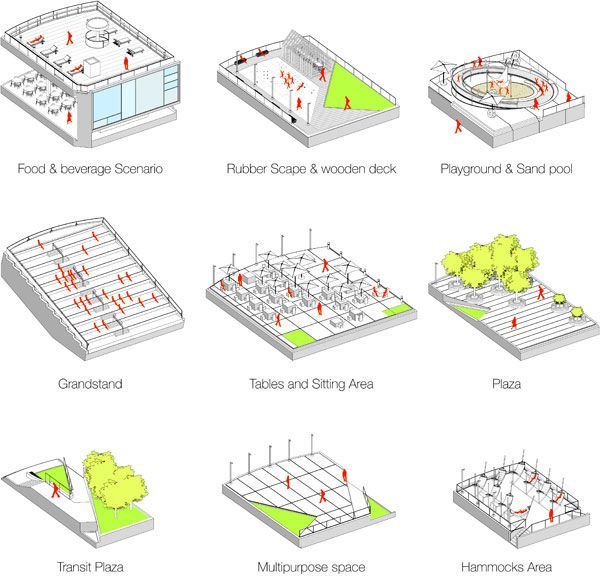 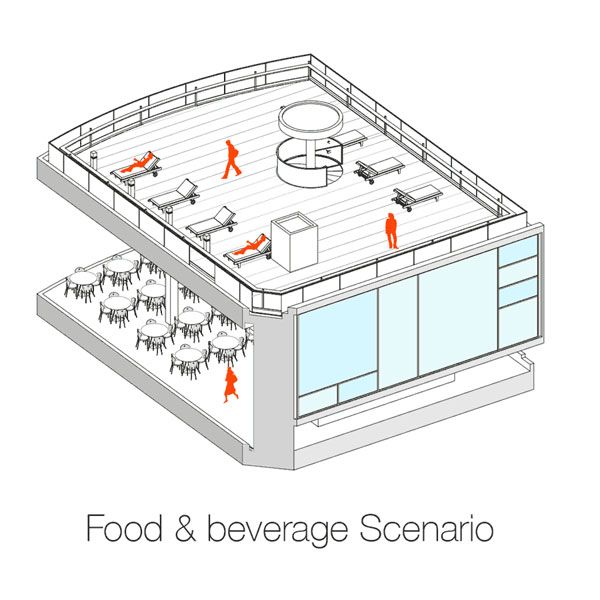 Hammocks Overlooking Hong Kong Next to one side of the grandstand is a plaza filled with many pink round tree-benches and the Hammocks Area, where people can lie down and gaze out to sea. The Hammocks Area also overlooks the amazing city scape of Hong Kong Island. On the other side of the grandstand are two platforms for children. One of them is surfaced in rubber and has a wooden decked pavilion. See Wat Else 100architects Have Been up to: 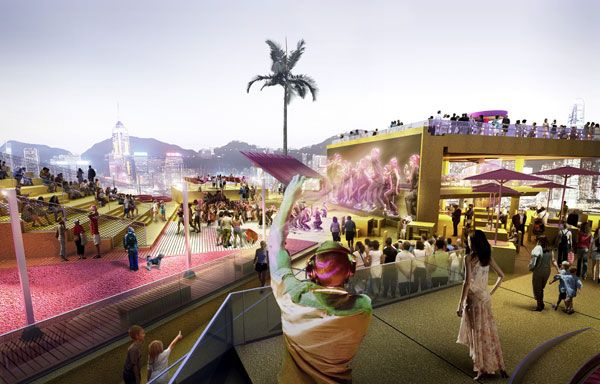 Completing the Circe of the “coin” The rubber surface offers a friendly playground for children, while the wood pavilion supplies shade for the parents to rest in while looking after their children. On another platform there is a sand playground with an oval wooden deck. Around the Food and Beverage Scenario are the tables and sitting area, which connect both the sand playground and hammocks to complete the circle of the “coin”. From Movement to Relaxation The design utilizes an axis between the Food and Beverage Scenario and the Grandstand to divide the “coin” from from the middle defining the various parts for different activities. The area designed including playgrounds focuses on movement while the section designed with round tree-benches and hammocks concentrate on relaxation. 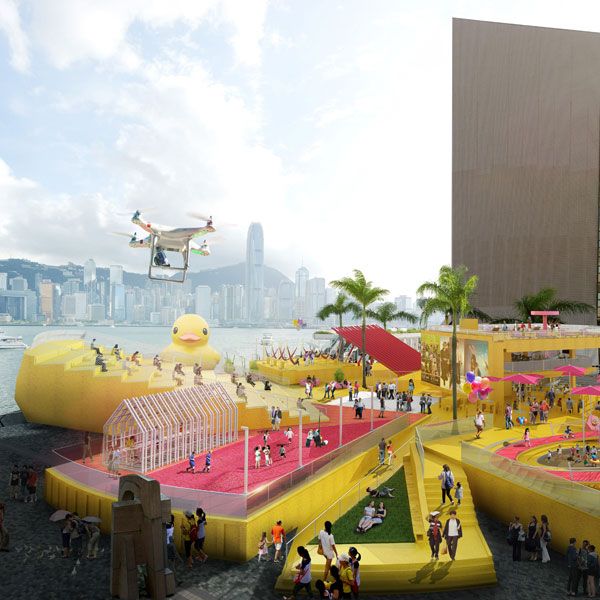 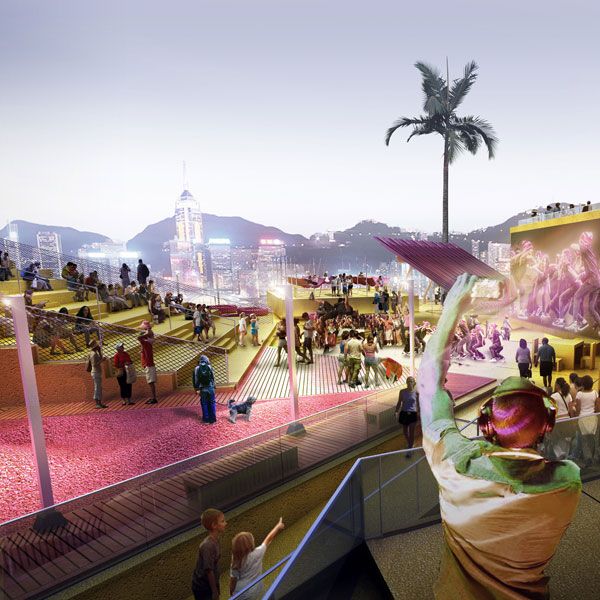 As a Landmark All the materials used in the project are painted with bright colors so as to present an intense image to emphasize the identity of the venue. The concrete platforms are mainly light yellow while the wooden deck and rubber surfacing are various shades of red to match the light yellow. The colors and the contrasting dimensions of the platforms create a dramatic scene, which provides a new attractive urban space for the city of Hong Kong. 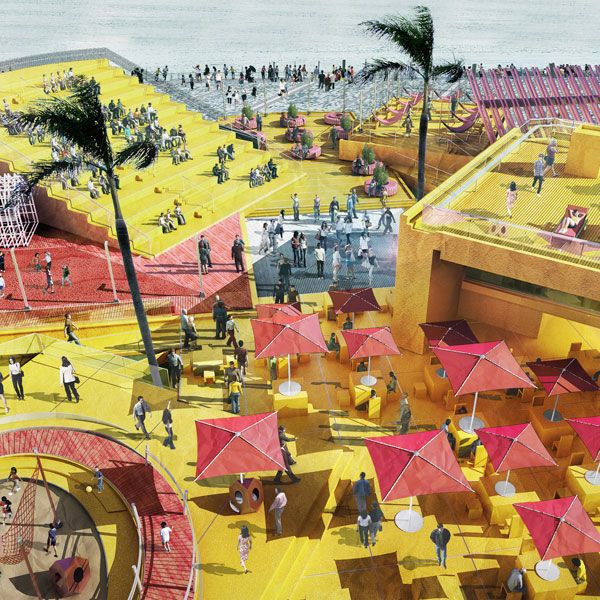 As Cultural Symbol The shape of the various spaces are defined according to the ancient Chinese coin, which was first used around 210 BC by Qin Shi Huang, who was the first Chinese emperor. This kind of coin was widely used in China for over two thousand years The form of the coin was strongly associated with the ancient Chinese philosophy (the dome-like heaven embraces the vast earth). 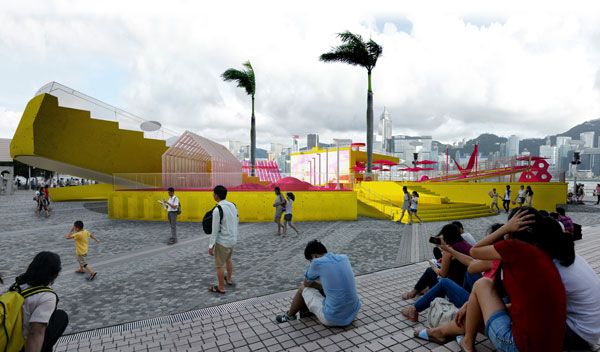 It was believed that the sky above was an enormous circle and the land was a square inside the circle. The design of these spaces at the Lucky Coin in Hong Kong utilizes the forms of the ancient coin to define a new meaning and function while still exhibiting the traditional culture. Recommended Reading: