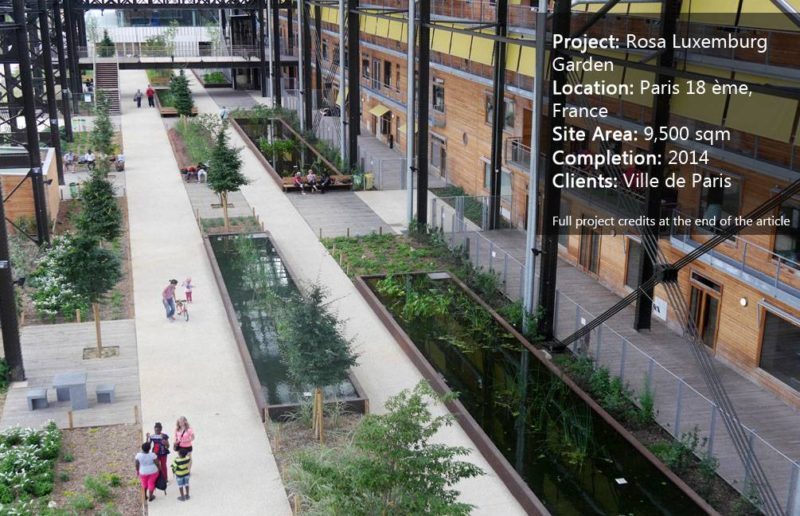 Article by Pooja Wahane – A review of Rosa Luxemburg Garden, by Atelier De Paysages Et D’Urbanisme, in Paris 18 ème, France.  Can someone work within a set of constraints in which the scope of innovation is almost negligible and still come up with a brilliant idea to transform an abandoned place into an aesthetically appealing, habitable, and comforting space? F.H. Jourda offers a promising answer to this — the Rosa Luxemburg Garden. Rosa Luxemburg Garden is an active railroad space that went from being an urban wasteland to evolving into a beautiful, semi-open green corridor. It is an exemplary example of how to combine architectural sensibilities and sustainability. 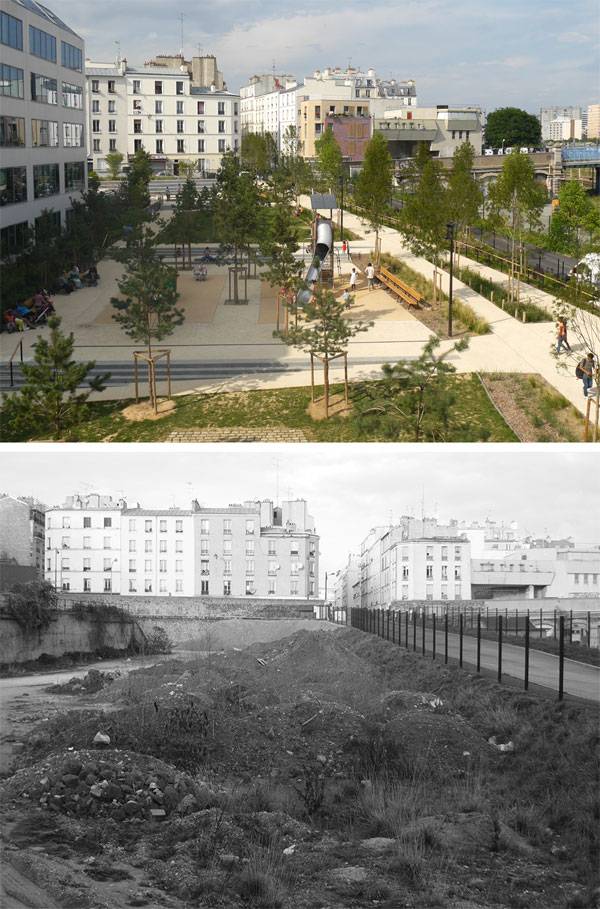 Before and after views of the open-sky garden

F.H. Jourda has managed to transform an abandoned warehouse spanning more than 9,500 square meters into a place that explores and encourages interesting conversations between man and nature. It currently houses a public library, a 300-bed youth hostel, seminar rooms, a design shop, a grocery store, a coffee shop, a fabrication lab, and a restaurant with bar. 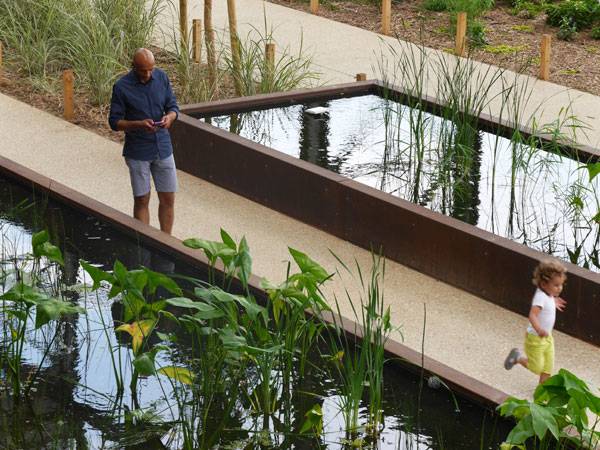 The garden’s home, Halle Pajol, witnessed the beginning of the industrial era and the evolution of railways in Paris. In 1926, due to demands for parcel transportation, a long metal hall, in art-deco style, was constructed on the site as a loading platform for goods. The concrete building was fully functional until the industrial activities met an abrupt halt. After this — much like the fate of all industrial buildings abandoned due to end of the era — Halle Pajol turned into an urban waste site, lying fallow until 2002. 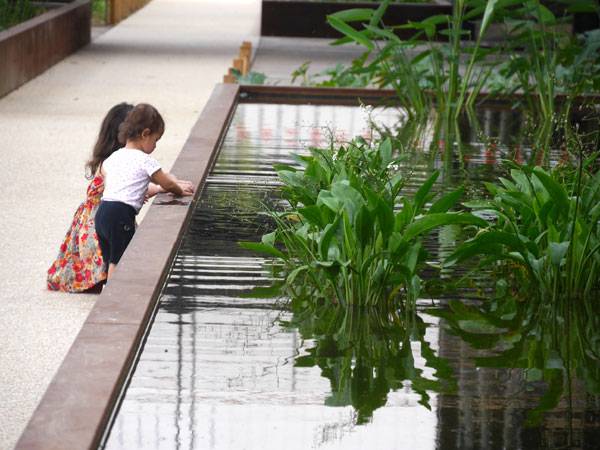 At that time, an attempt at rehabilitation was made, proposing the space as a housing estate of more than 600 units. This proposal met fierce protests from both the residents of neighboring areas and local associations, due to the lack of greenery in the plan. The proposal was eventually dropped, and Halle Pajol continued to exist as an urban wasteland. 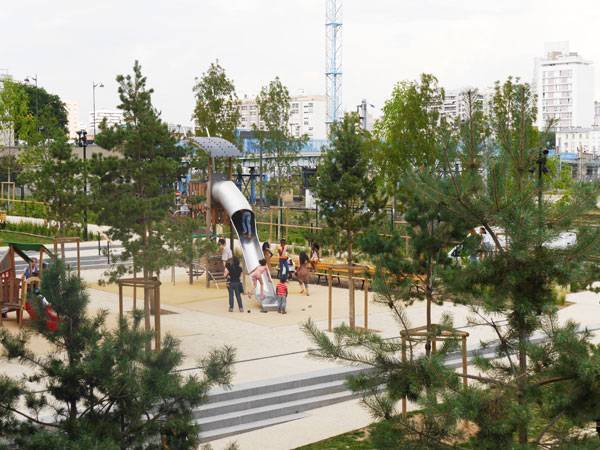 Working on an abandoned site is never an easy task. There are no laid-out, straightforward instructions, because each site is unique and holds a different set of obstacles. The past story, the present scenario, and the future impact all have to be considered when redesigning such a particular space. The vision for Halle Pajol was to build a safe neighborhood on an old railway site — a new urban rehabilitation that would structure the site into two safe cities – the first being the urban activities and services and the latter being the residential living and hotel logistic. 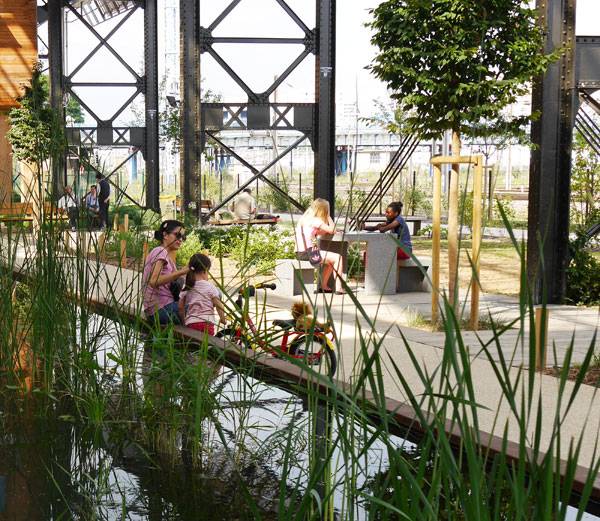 A team of willing professionals came together as volunteers for the action plan. This multi-disciplinary team consisted of architects, urban planners, and sociologists. The challenge they faced was to combine “Parisian radiance” with local expectations in order to make Halle Pajol an inspiring module of environmental and sustainable development. 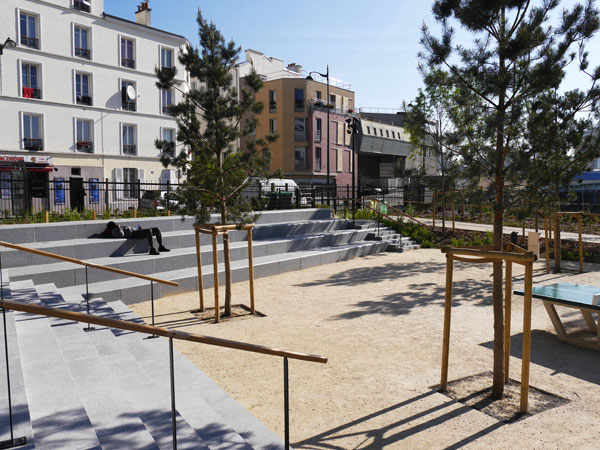 Halle Pajol has come a long way from its abandoned roots, embracing new technology along the way. Now, it boasts a solar, photovoltaic power plant that is the second largest in all of France. The site’s power demands are met by the production of 410,000 kwh/year through 1,988 solar panels covering a total area of 3,500 square meters. New technologies being incorporated include a power pipe system and dual flow VMC. 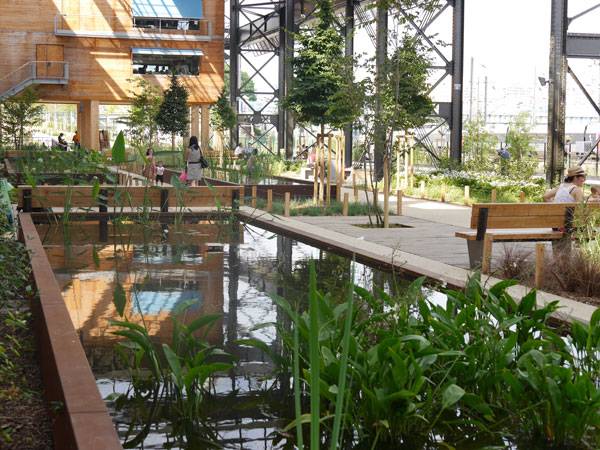 The team designed an ideal sustainable module and ensured that this vision was met by using renewable materials in the rehabilitation of Halle Pajol. All of the spaces are placed around an 8,000-square-meter semi-covered garden with pedestrian pathways and street furniture. This green corridor provides ample recreational opportunities. This seems a daunting task, as the gardens are located near railway tracks, but the architects managed to achieve relaxing conditions by designing buffer zones throughout the site. Small green patches around walkways and playgrounds punctuated with water pools offer a respite from the daily busy life by creating a relaxing, peaceful atmosphere. 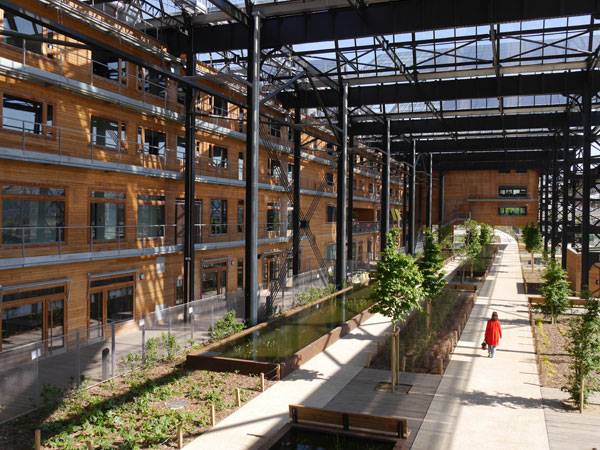 View of the covered garden, under the metallic frame of the Halle. Image courtesy of Atelier De Paysages Et D’Urbanisme

The before and after rehabilitation pictures of Halle Pajol are striking, because they almost seem unbelievable. Halle Pajol is a perfect example of how a holistic approach can transform a space completely. If we apply this concept of urban renewal to all abandoned structures, a new neighborhood can be cherished by everyone. When shall we take this major step? 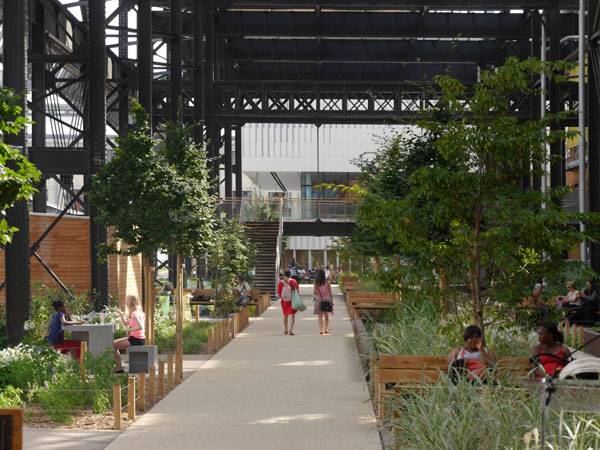 View of the covered garden, under the metallic frame of the Halle. Image courtesy of Atelier De Paysages Et D’Urbanisme