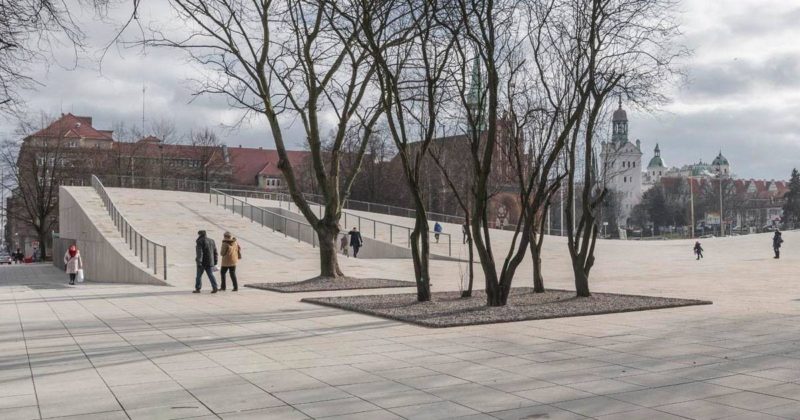 Article by Win Phy0 – A review of Przelomy Centre for Dialogue, by KWK Promes, in Szczecin, Poland. Imagine a place that is deeply rooted in a painful history, a place that hasn’t caught a break in the years since. The potential for reviving that space and making a 360-degree turnaround might seem highly unlikely. For years, a section of Szczecin, Poland, suffered this sorry state. The once vibrant urban quarter was first destroyed by aerial bombings during World War II, then neglected under Soviet regimes. There were times when the people tried to take back the site’s identity, but it wasn’t until the turn of a new century that real progress began to be made.

Today, the city has taken back this space, now home to the Przelomy Centre for Dialogue. The turnaround is a result of good planning and design decisions that focus less on a complete re-invention and more on acknowledging and rebuilding much of the history that was involuntarily ignored. WATCH >>> World Building of the Year 2016 is part building, part topography says architect Robert Konieczny

The Scars Behind the Square

In 1907, the site was a densely populated quarter of the city, vibrant with urban activity. The advent of World War II brought with it destruction, with bombings literally leaving a physical hole. After the war, Soviet occupation led to ill treatment of the neighborhood. New motorways were built alongside crude concrete blocks, while the city’s empty spaces – including the square that is now home to the Centre for Dialogue — were neglected. 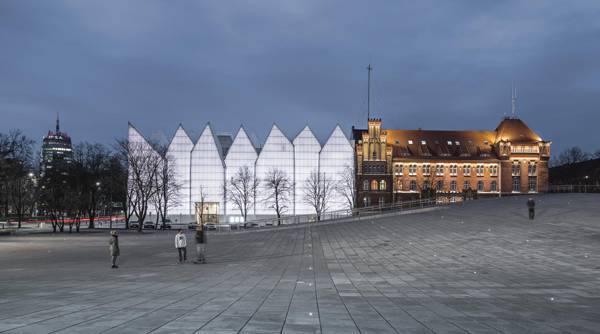 For decades, citizens lived under Soviet censorship that prohibited them from speaking freely and commemorating their war history. In December 1970, the destruction of a housing block near the current location of the Philharmonic Hall, opposite the Przelomy Centre for Dialogue site, sparked a workers demonstration in the old square. The violence left 16 people dead and more than100 wounded. In 2009, the Solidarity square was constructed to commemorate the protest. The project included a tall monument named “Angel of Freedom.” 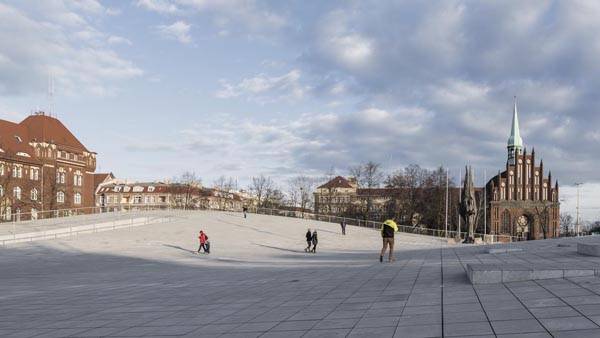 Reconciling the Past Through Good Design

The Solidarity square was used for the odd commemorative event, but for the most part was still empty of life and everyday use. This was not helped by the indistinguishable boundaries of the square, which was bordered by a main road that was highly congested. A decision was made to change the use of the square. But filling the physical and memorial holes within the site was not going to be an easy task. How do you begin to decide what happens in a space that already has a lot of stories to tell? Will it turn into new development or an open space? 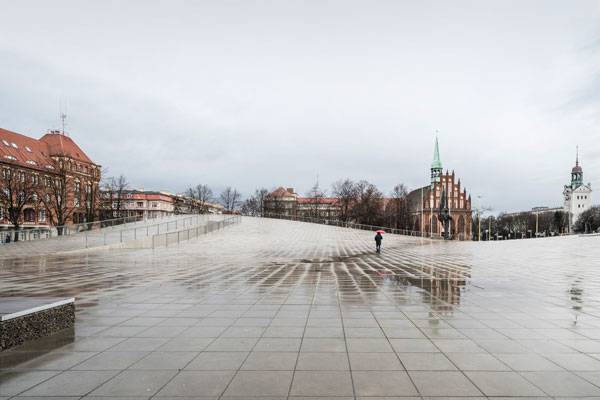 The designers decided to change the grounds into a focal point for cultural activity. Przelomy Centre for Dialogue was built as a venue for temporary and permanent exhibitions, conferences, debates, educational workshops, and commemorative events. The permanent exhibition consists of the stories of the city’s recent history that had been left untold — of events during the war and the workers demonstration. 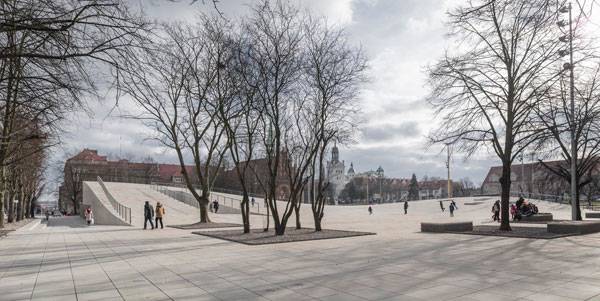 The entrance to the museum is embedded into the roof of the building as well as on the ground level, complimenting the context of the site. Much of the new building is underground, leaving the surface of the site unchanged. This creates a complimentary open space for both the museum and the Philharmonic Hall and church across the way, adding further value to the space. 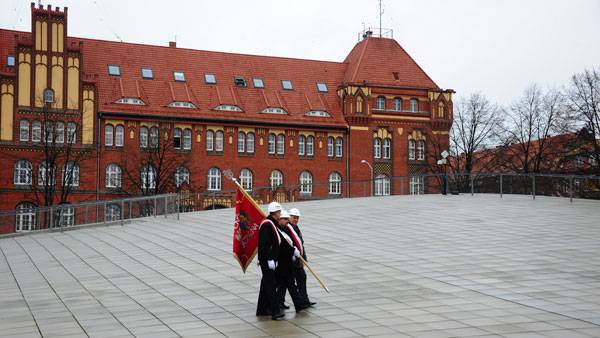 The Prewar Urban Quarter and the Postwar Square

From the beginning, there was a clear and clever intention to integrate the previous site’s uses. The language of the proposal derived from the 1907 urban quarter development and the 2009 square, which popped up after the war. Respecting these pieces of history has led to the success of the site. What came out of this intention was an urban hybrid reflected physically in both forms of the quarter and the square. 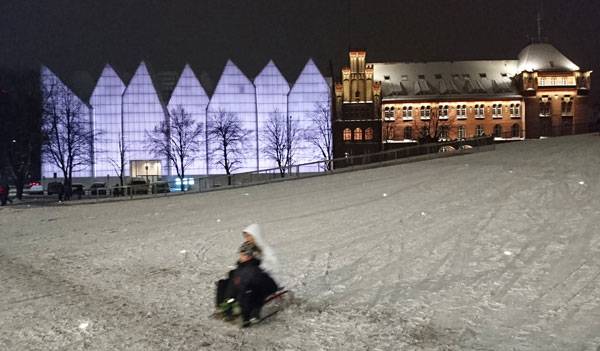 How is that possible, you might ask? One corner of the site is pointed and straight like the former quarter; the opposite corner is curved, resembling the former postwar square. Both corners are slanted upward — the straight-edged corner contains the museum, while the curved corner creates a hill that protects the space from the busy road. Together, both work to enclose the space like a quarter, while keeping the values of an open public square. In keeping with the intention of integrating the history into the site, existing trees and the Angel of Freedom statue have been integrated into the new design. 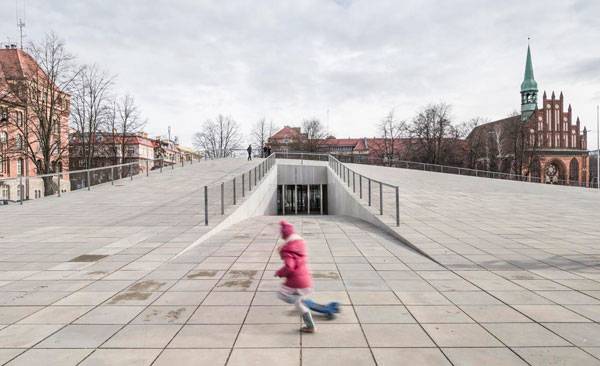 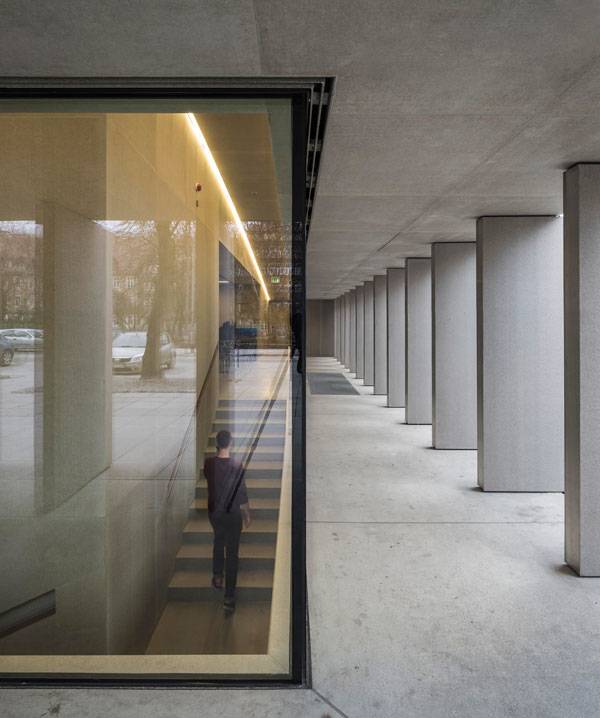 How Are the Interior and Exterior Spaces Enhanced?

The designers involved in creating the public realm collaborated with the interior designers. They decided to use concrete as the only material, achieving a monolithic character for the whole design. As you step down into the underground museum, the interior made up of black floors, walls, and ceiling reflects the dark history. From the outside, panels of rotating walls show glimpses of the inside, letting light through to the underground floor. 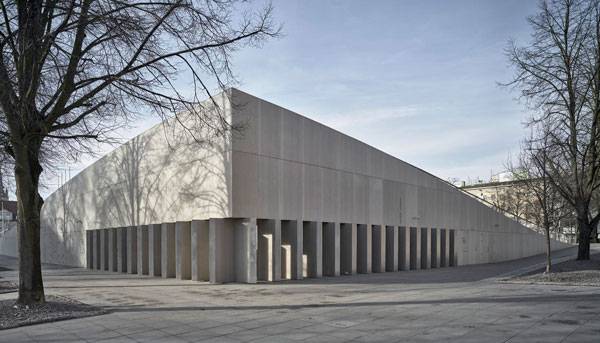 Otherwise, in both the interior and exterior spaces, lighting is kept very minimal, with ground lighting in the square and in much of the interior museum rooms. It is this coming together of the exterior architecture, interior design, and public realm that makes the whole design highly atmospheric. 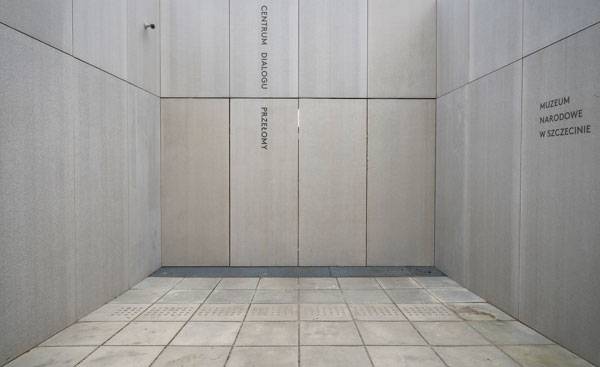 Every day, even after the museum has closed, there is still plenty of activity in the square, creating a space filled with lively interactions. The sloping topography, combined with the smooth paving, is a magnet for young people who enjoy riding their bikes, skateboarding, skating, or sledding. 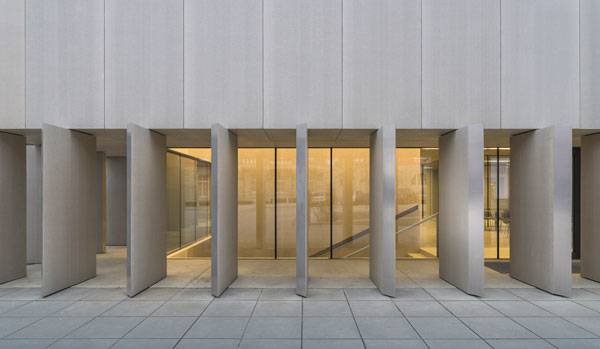 The City Council also uses the sloping surface for outdoor summer cinemas and open-air concerts, making it a real communal space. As you can see, there is no ban on any activities, which spreads the message of freedom in use and expression, a concept not understood by some past inhabitants of Szczecin. Now it has become a manifestation of art, culture, and history made up of an exchange of opinions. It is now truly a people’s square, and its intention is to stay this way. 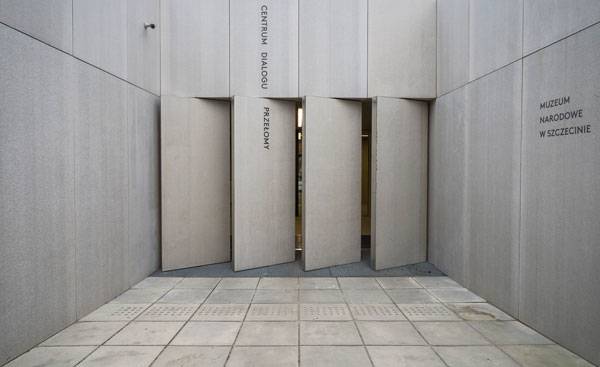 The social fabric that was once ripped apart has now been woven back together. The design is loud in its celebration of history, but quiet in its minimalistic manner, which does not overshadow the significance of the opposing Philharmonic Hall, but rather compliments it. For many years, this site was devoid of any activities or sense of ownership and had several unacknowledged memories. The project essentially represents this void, but the void in the space also presents itself as a new chance to replace the more tragic memories with communal events, the laughter of young people playing, and a chance for locals and visitors to experience a cultured city. If you had a chance to design the site of Przelomy Centre for Dialogue, would you have done it differently? 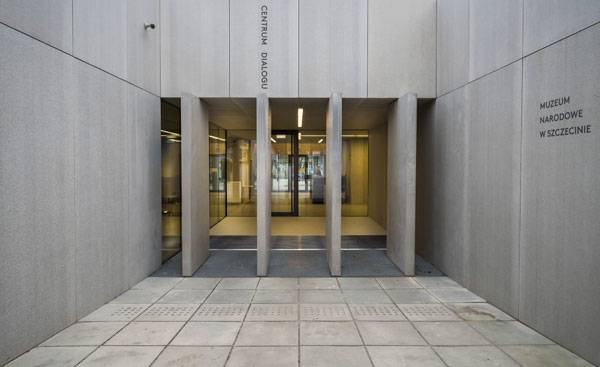 Full Project Credits For the Przelomy Centre for Dialogue: