Were it not for its honor award in the 2012 ASLA General Design Awards, I might not have ever heard of the Quarry Garden, much less been willing to make the trip out to visit its rather remote location in Songjiang District–it took me over two hours on public transportation to get there from Pudong (foreign tourists are thus a rare sight here)–but I’m so glad that I did. The Quarry Garden, as well as the surrounding sights in Chenshan Botanical Garden, are highlights in my trip to Shanghai. 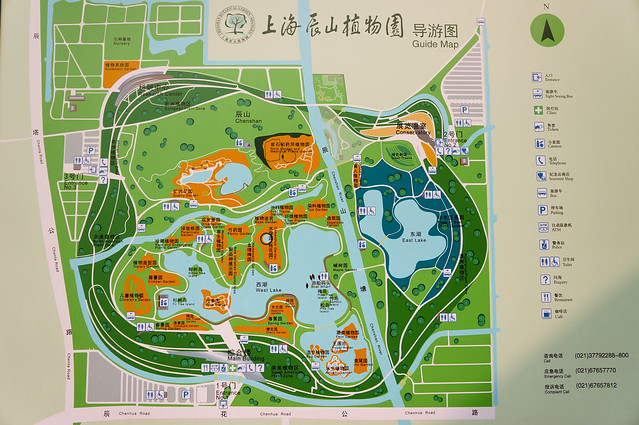 The Chenshan Botanical Garden is the largest botanical garden in Shanghai and, in addition to the famous Quarry Garden, it also impressively boasts 26 themed gardens, over 9,000 different species of plants and flowers, and beautifully integrates research, education, and landscape appreciation. Built in April 2010 as part of the municipal improvements for Shanghai’s 2010 World Expo by Chinese and German designers, this 200 hectare garden is also home to Asia’s biggest greenhouse (12,000 sqm), which contains over 3,000 species from around the world, including rare and protected plants. All together, the Shanghai government spent an estimated 2.1 billion yuan (US$319 million [2010]) on the project. 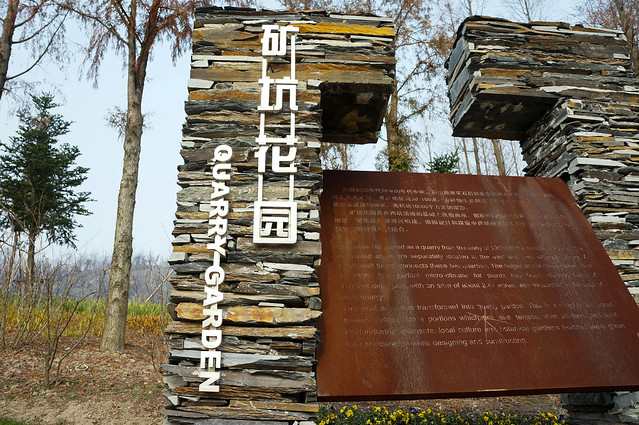 The Quarry Garden is situated at the center of the botanical garden and covers an area of 4.26 hectares (10.53 acres). What makes this design project remarkable is its design sensitivity to the former quarry yard’s ecological, historical, and cultural context. 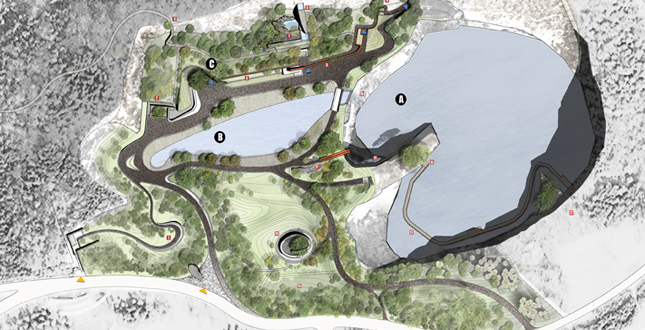 The old quarry yard operated from the early 1950s to the mid-1980s with the excavated areas separately located on the east and west sides. The quarrying operations greatly damaged the landscape on Chen Mountain, stripping away much of the surface vegetative cover and resulting in massive soil loss and habitat fragmentation. The transformation from that of a scarred landscape to an eco-friendly public space earned the renovated quarry not only multiple awards, but also the praise of the 2012 ASLA jury:

” It’s a very honest project. It’s not trying to cover up what it is and it’s an example of everything done right in reclaiming a quarry. As it seeps down and stains, it will be even more beautiful.” 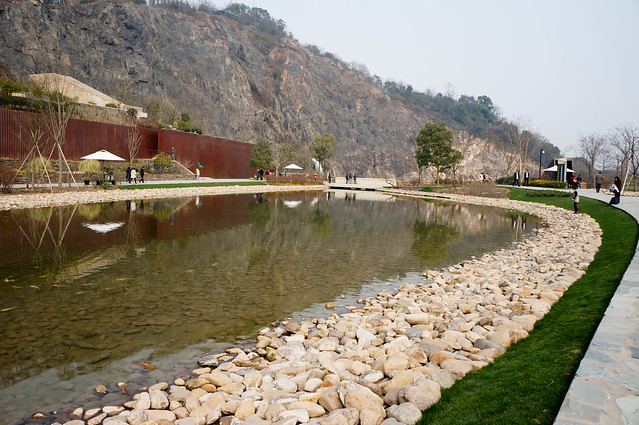 Starting at the main entrance, visitors are first greeted by the Lake Area located in the west side of the garden. Designers transformed and reconstructed what had once been a lifeless and even rock surface into “Mirror Lake” and the “Flower-seeing Platform.” 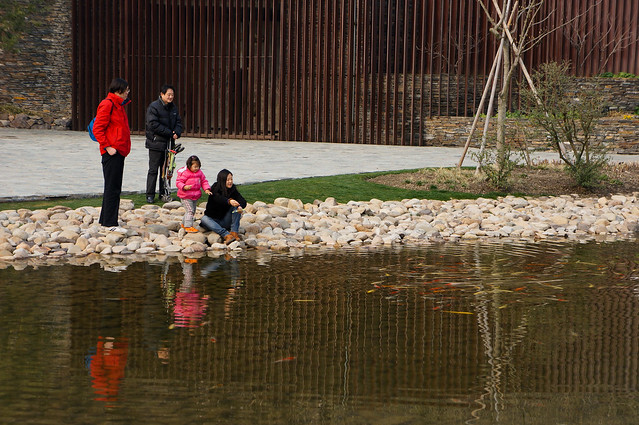 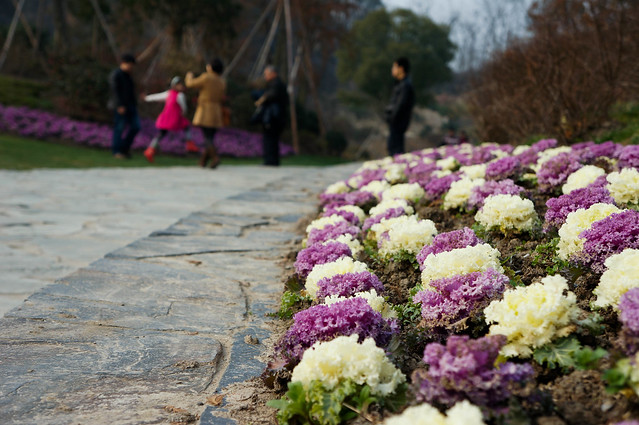 Proceeding to the main attraction, visitors then descend the dramatic corten steel pathway that plunges down a cliffside to a deep water pool measuring 1 hectare (2.47 acres) in size. Security guards and turnstiles were positioned outside the entrance, presumably for safety and traffic control, though there was little need on the day I visited (a post-Chinese New Year weekday). 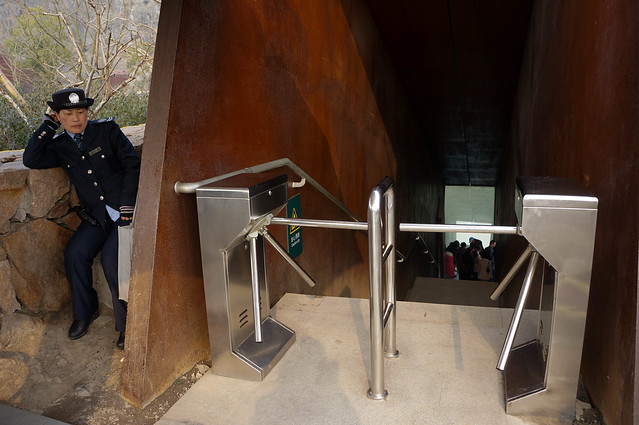 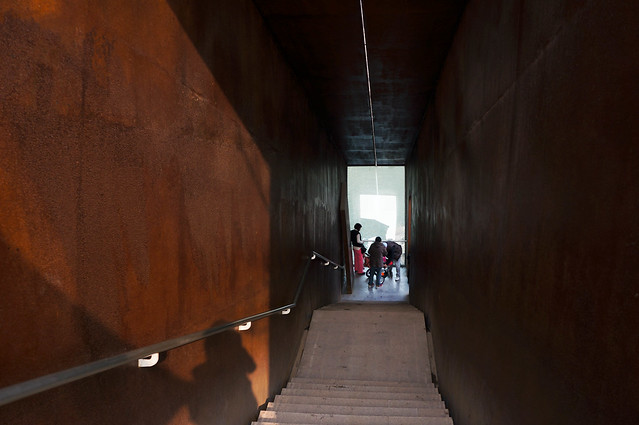 I loved the experience of walking down the steep, winding staircase, hugging a wall of exposed rock to the right and opening up to views of the deep pool, cascading waterfalls, and the peak of Chen Mountain to the left. 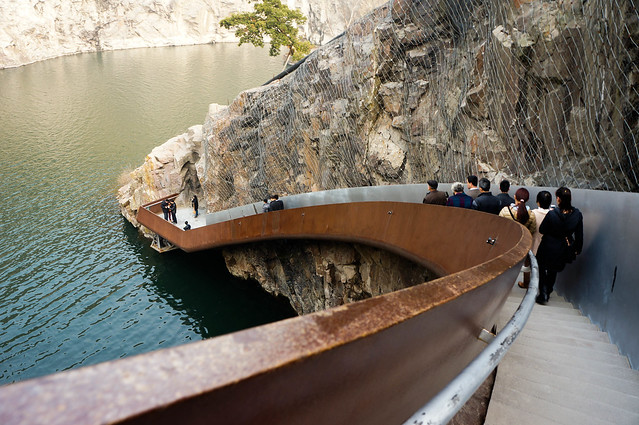 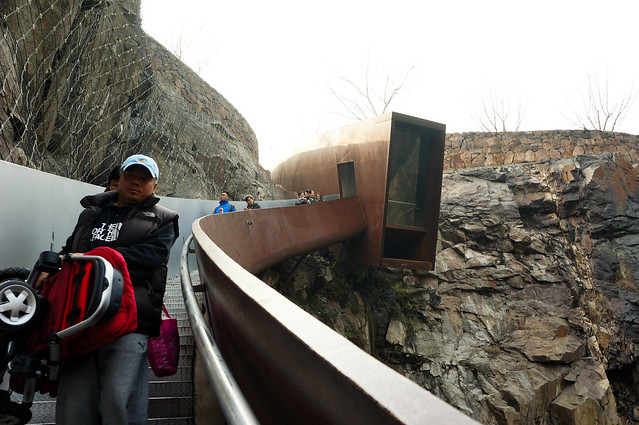 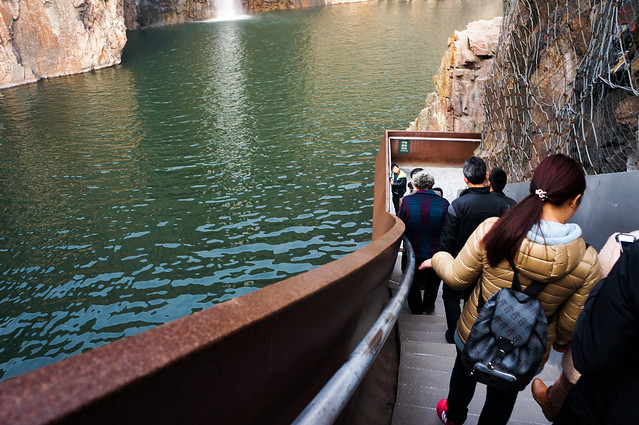 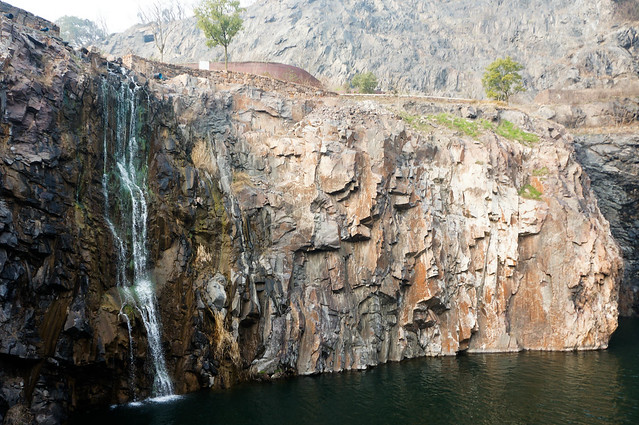 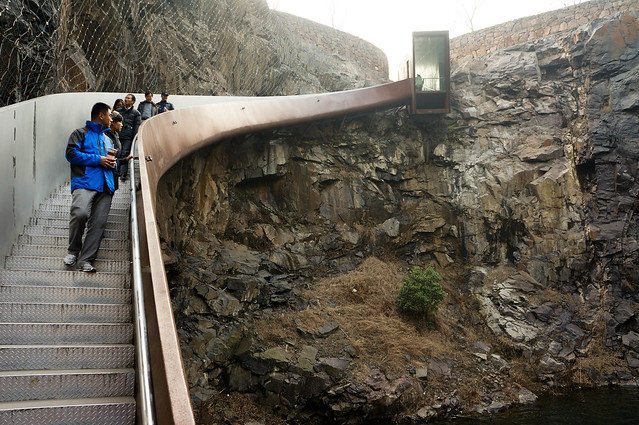 After passing beneath the rock overhang, the winding, floating wooden bridge starts, enabling visitors, “”to experience the quarry from more angles and to enjoy dramatic space, which will further strengthen their understanding for the oriental cultures of landscape and mining industry.” (ASLA) 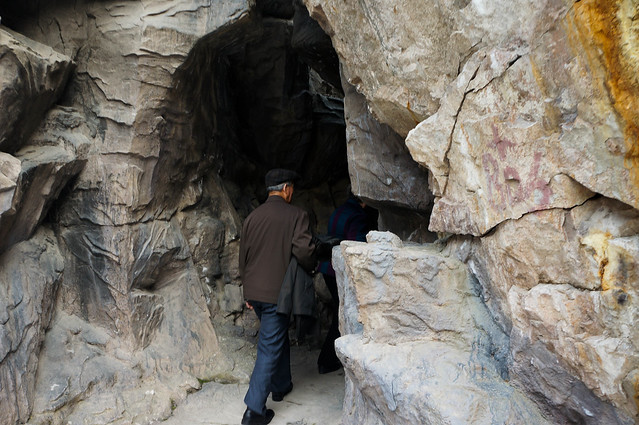 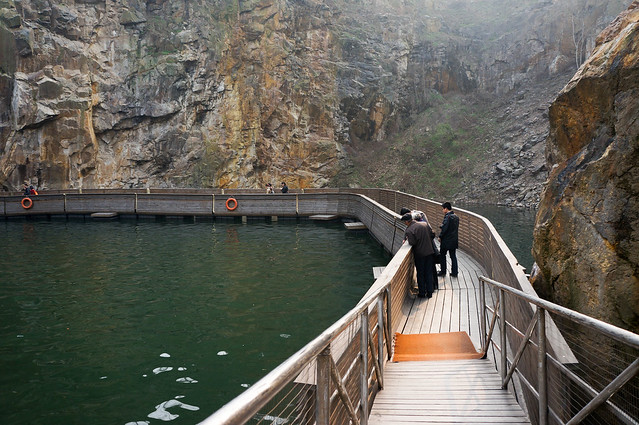 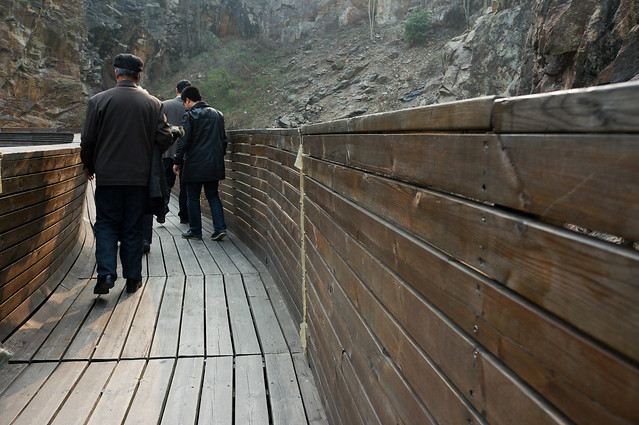 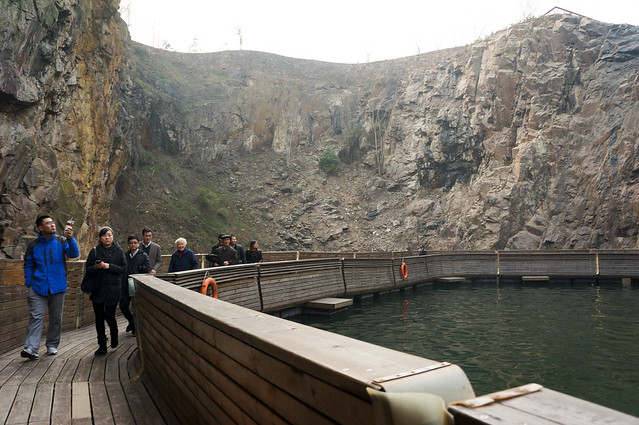 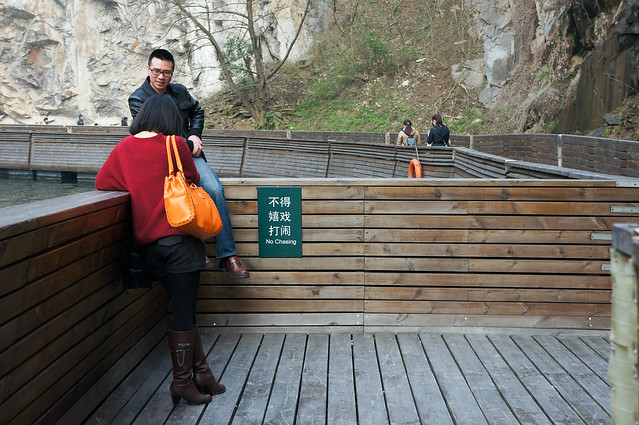 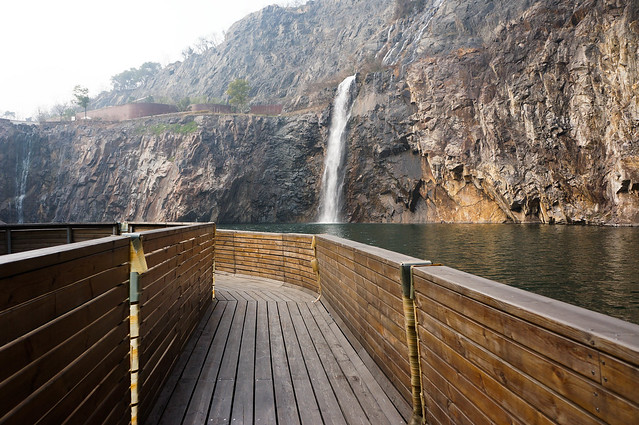 At the end of this route, a 150 m (492 feet) tunnel rises for 25 m (82 feet), connecting the east to west quarry. The variety in the sequence of spaces in this garden make a strong impression, from the wide open space at the entrance lake, to walking along the narrow floating wooden walkway at the bottom of the deep water pool, to the ascent up the dark and damp tunnel that mimics old mining tunnels. Dimly lit and surrounded by the sounds of water on both sides, the steep (and sometimes slippery) climb upwards finally opens up to the end of the Quarry garden and spills out to open sky, a medicinal garden, and a rock garden. 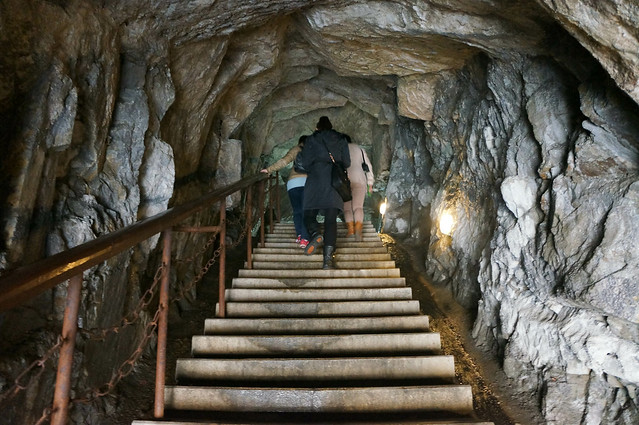 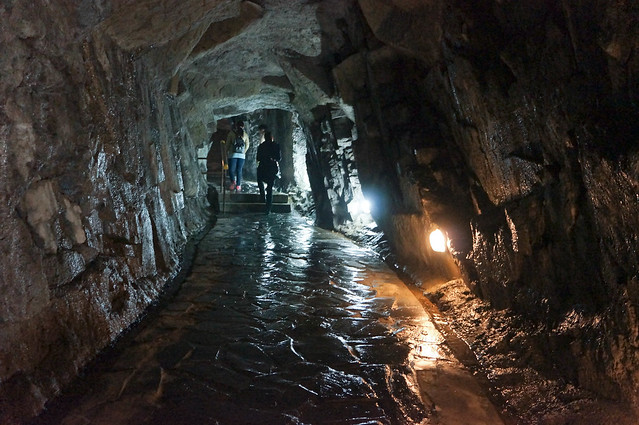 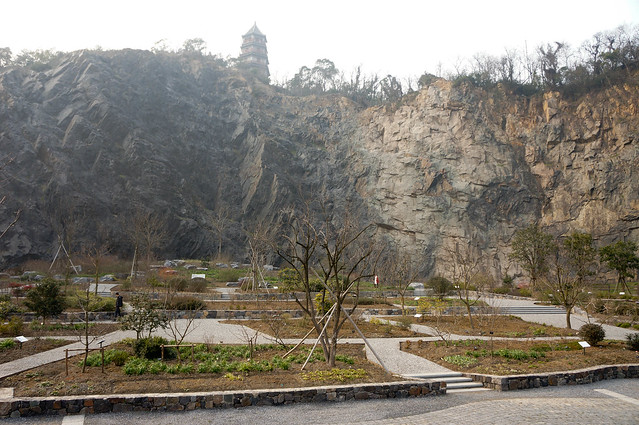 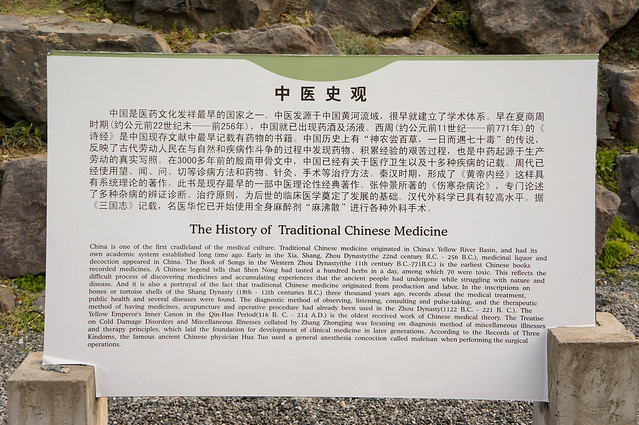 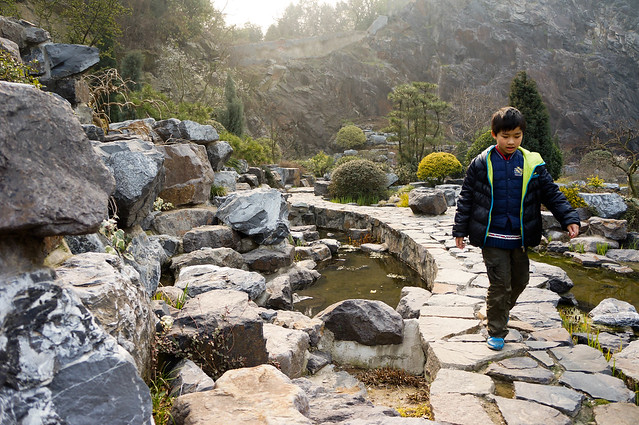 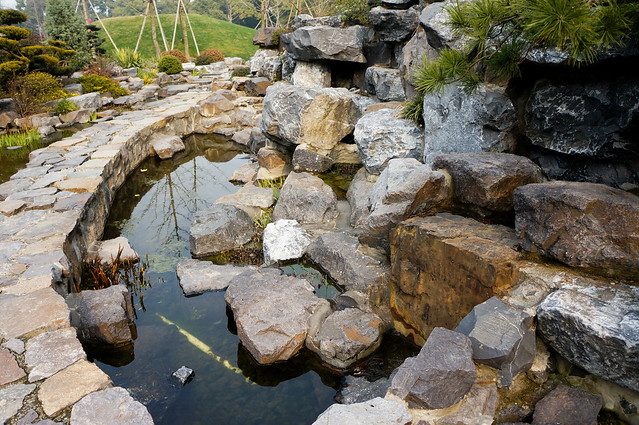 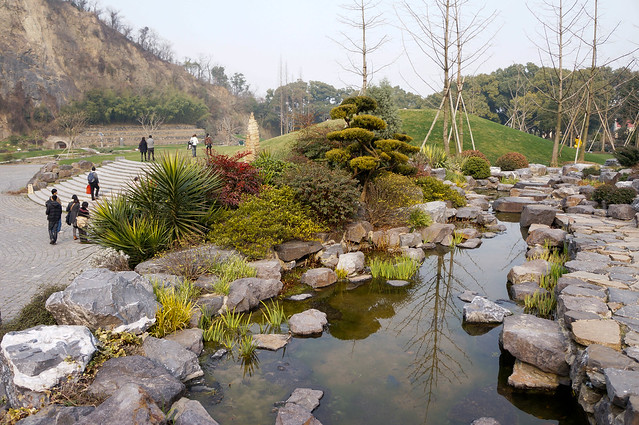 Having visited in early February, most of the gardens at Chenshan Botanical Garden still lay dormant from the winter, though the plum trees had begun to blossom. Luckily, the Quarry Garden is a year-round attraction. I hope to return in the future to explore more of the 200-hectare grounds, of which I only walked a fraction in the three to four hours I spent there. If you’re in Shanghai, I highly recommend making the (long) trip out to Chenshan Botanical Garden–you won’t regret it.

All photos, with the exception of those credited otherwise, were taken by author Lucy Wang. Please ask before using. Quarry Garden article also appeared on www.landscapevoice.com.

Hi! My name is Lucy Wang and I’m a recent landscape architecture grad from the University of Maryland. I travelled the U.S. (and parts of Canada) by mass transportation for several months in search of great, publicly-accessible landscape architecture sites, as well as landscape architecture firms and universities. I also was able to make a trip out to Shanghai in China for six weeks. I’ll be sharing some of my favorite finds on Land8 along the way. For more information, check out my profile.  As always, feel free to leave a comment below!

Subscribe: Receive the latest from Land8 via email: http://goo.gl/fEvxo