Amazing landscapes to inspire your mind. In the words of Frank Lloyd Wright – “Study nature, love nature, stay close to nature. It will never fail you.” The natural world is full of fantastic wonders. Since the dawn of time Man has drawn inspiration from the natural environment. Here we share with you some of the world’s most amazing natural landscapes that you won’t believe aren’t photoshopped to inspire you in your work and studies as landscape architects. Take a couple of minutes now to check out these beautiful landscapes. Go on. You deserve it. 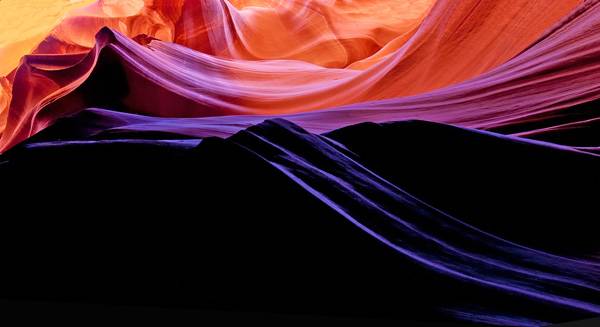 Lower Antelope Canyon or Hazdistazí (meaning Spiritual Rock Arches) as it is known to the local Navajo people who own the land, is part of a spectacular slot canyon system in Arizona, USA. As light pours into the slot canyon it illuminates different places on the canyon’s walls at different times of the day, creating an ever changing display of light and shadow. It is easy to understand why the Antelope Canyon system is the most photographed slot canyon in the World. In fact recently a photograph of the canyon has sold for $6.5 million (USD)! 2. The Eye of the Sahara 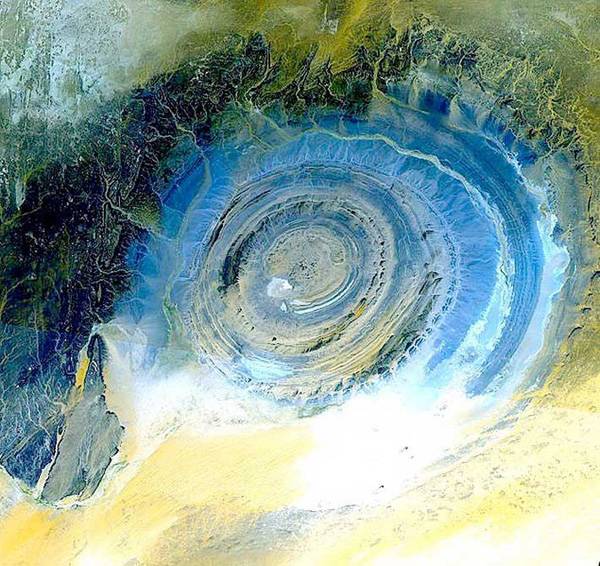 Also known as the Richat Structure, the Eye of the Sahara is a massive 50 km (31 miles) wide geological feature near Oudane, Mauritania, in the Sahara Desert. Due to it’s almost perfect circular structure and striking colors the Eye of the Sahara has attracted many fantastic stories over the years involving aliens and links with the lost city of Atlantis. The truth is, scientists don’t truly know why the structure is circular. It used to be believed that it was the site of a enormous asteroid impact, but this has since been discredited. It is now widely believed that the Eye was formed as a result of rising rock formations, volcanic action, and thermal springs. 3. Zhangye Danxia Landform 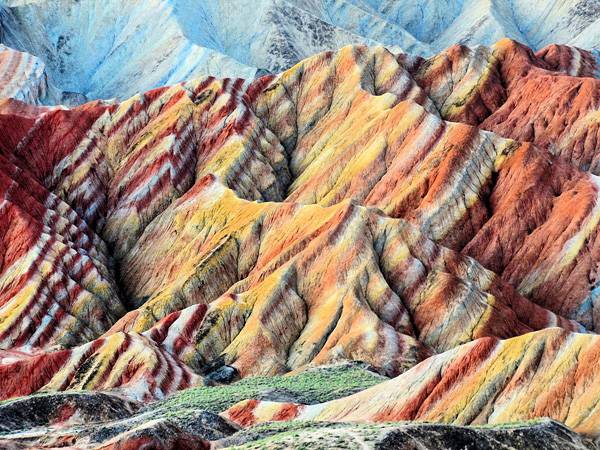 The Zhangye Danxia Landform in China is a region of rugged terrain that bears the most incredible range of colors. The fascinating array of colors is due to a combination of effects of erosion and mineral deposit acting upon the natural sandstone bedrock. This process of coloration is thought to have taken around 24 million years, and dates back to the Cretaceous period. 4. The Marble Caves of Chile 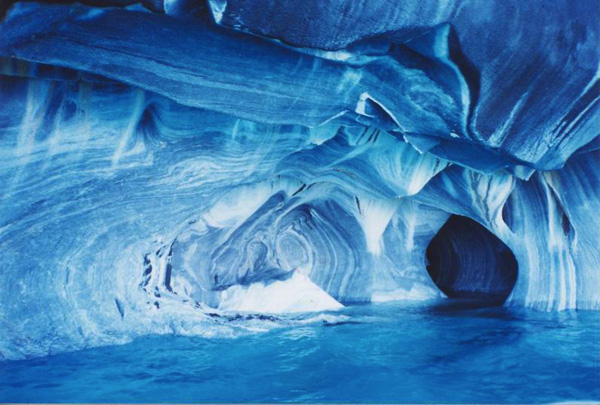 The Marble Caves of Chile. Credit: By Raulurzua, CC 3.0

The Marble Caves, or Cuevas de Mármol, are a spectacular array of caves formed from solid marble on Lake General Carrera, a remote glacial lake on the boarder of Chile and Argentina. The caves were formed by wave action over a period of around 6,000 years. The walls of the caves are actually white, but reflect the stunning blues of the glacial waters, and so the spectacular scene changes depending on the light, from day to day, and time of year. 5. Pamukkale 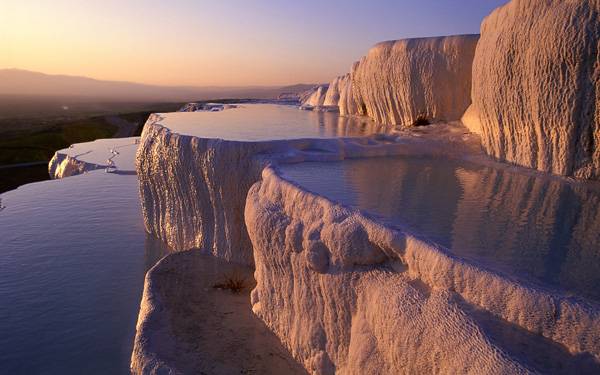 Pamukkale is Turkish for ‘Cotton Castle’. Looking at the shockingly white travatines, or terraces of carbonate deposits one can hardly believe it is a natural feature. This vast landscape 2,700 m (8,860 ft) long, 600 m (1,970 ft) wide and 160 m (525 ft) high has been created by the thermal springs of the region (ranging in temperature from 35º C (95º F) to approximately 100º C (212º F). The region has been a tourist attraction since the 2nd century BC, and is now a UNESCO World Heritage Site. Nowadays only a few of the pools are open to the public to bathe in. 6. The Giant’s Causeway 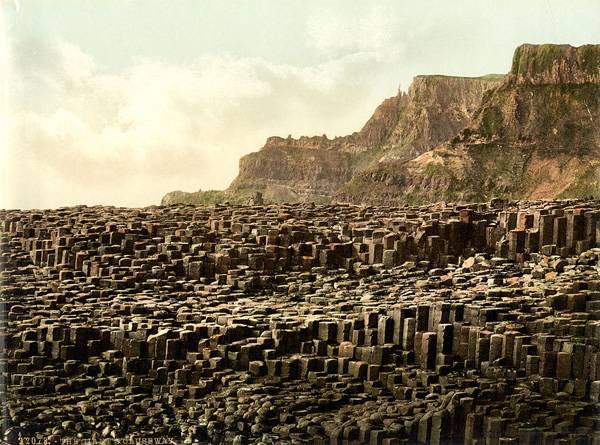 The Giant’s Causeway (also known as Clochán an Aifir or Clochán na bhFomhórach in the native Irish language), is an impressive landscape of geometric interlocking basalt columns in County Antrim on the north-east coast of Northern Ireland. While looking suspiciously regular in shape, the pavement is actually entirely natural. The causeway was created some 50-60 million years ago by huge volcanic eruptions which caused hot liquid magma to rise up through limestone to form a layer on the surface. As this layer of lava cooled it cracked in much the same way as mud does when it dries. 7. The Glowing Electric Blue Sea of Vaadhoo This striking image of a night time beach in Vaadhoo in The Maldives is one of the most unusual natural phenomena known to man. It is caused by a few species of algae known commonly as a Red Tide. During the day these dinoflagellates color the water red, and often bloom in such quantities that they block out the light and deplete oxygen levels, causing other marine species to die. However, at night when disturbed by currents (such as waves on a beach) the algae is exposed to a greater concentration of oxygen, which causes them to fluoresce by means of natural bio-luminescence, creating this amazing glow-in-the-dark beach. 8. Grand Prismatic Spring, Yellowstone National Park 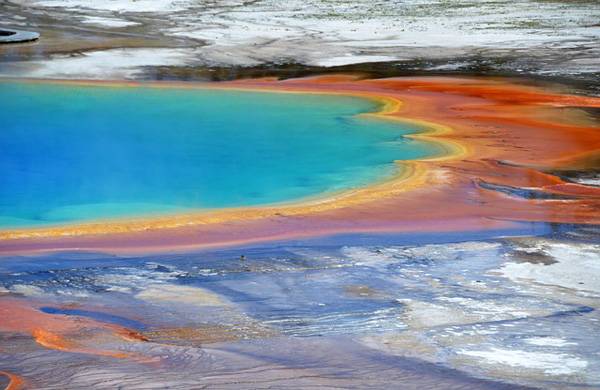 The Grand Prismatic Spring in Yellowstone Park, USA, is one of nature’s truly amazing wonders. The striking colors are actually the result of bacteria growing in the water. They range from green to red, following the spectrum of split white light as can be found in a rainbow. Each bacterium species favors slightly different temperatures, and so the striking concentric bands of color are formed as the water gradually cools towards the edges of the spring. What’s amazing is that bacteria can survive in the water at all, as the average temperature is a shocking 70º C (160ºF)! 9. El Saldar de Unyuni Salt Flats 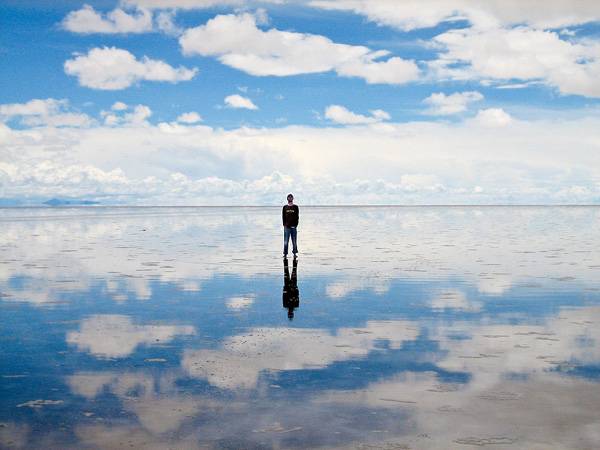 The Salar de Uyuni Salt Flats in Bolivia is one of the most bizarre and dreamlike landscapes in the World. At 10,582 square kilometers (4,086 square miles), El Salar is the world’s largest salt flat. Despite it’s large area the salt flat deviates in altitude by no more than 1 mm across its entire surface! The exceptional flatness, combined with the water content of the drying salt, gives rise to El Uyuni’s amazing ability to reflect the sky so perfectly, creating this stunning Topsy-turvey landscape. 10. Sossusvlei red dunes 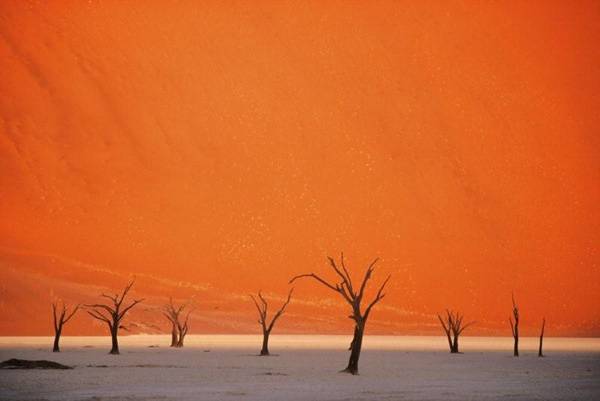 The eerie and enigmatic red sand dunes at Sossusvlei in Namibia form a striking backdrop to the flat salt and clay plains or ‘vlei’ as they are known in Africans. Due to their high salt content the flats cannot sustain plant life, and are a stunning almost pure white in color. The sand dunes owe their shocking red and pink colors to iron oxide present in the sand, and are amongst the tallest sand dunes in the World, with many extending to heights in excess of 200 m. The tallest, nicknamed Big Daddy, stands at 380 m in height. See these pictures “BIGGER” with our Slideshare presentation: Where do you get your inspiration from? Sometimes we all need to take a break from the grind of continuous designing and refresh our inspiration. There are many ways we can recharge our inspiration batteries, but for me I can always find inspiration in nature. As the great Albert Einstein once said “Look deep into nature, and then you will understand everything better.” So whether the beauty of the Zhangye Danxia Landform or Antelope Canyon have rekindled your love for natural stone; or the striking colors of the Grand Prismatic Spring or Sossusvlei Red Dunes have given you pause to reassess your favorite color schemes, there’s no doubt that taking just a little time out to refresh your inspiration can have a beneficial effect. Why not use the comments section below to share with us your favorite inspiring natural landscape that you can’t believe hasn’t been photoshopped. Recommended Reading and Great Gift Ideas: