An Exclusive review of Yanweizhou Park by Turenscape, in Jinhua City, Zhejiang Province, China. In the Chinese culture, water is one of the five elements – the other four being metal, wood, fire, and earth – but water is one that is held especially close. One theory is that due to China’s mountainous topography, Chinese cities were built in the valleys close to the many rivers that flow through the land. For this reason, the Chinese people came to view the rivers as the heart and lifeblood of their culture. So, it comes as no surprise that the latest Turenscape project, Yanweizhou Park, is built around not one, but three rivers. 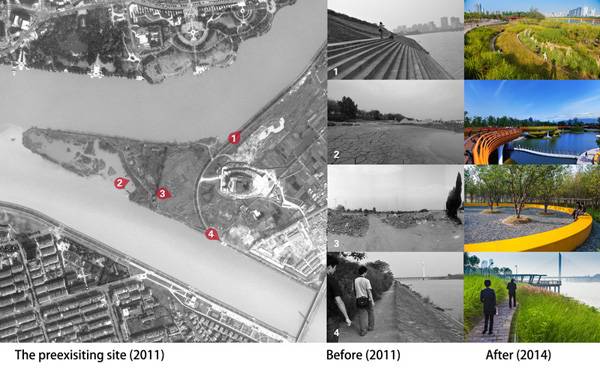 Yanweizhou Park, before and after pictures. Credit: Turenscape

Yanweizhou Park is located in Jinhua City where the Yiwu River, Wuyi River and Wujiang River converge. At more than 250,000 square meters and carrying a price tag of more than RMB 300m, this a truly a magnificent addition to both the social and ecological Chinese landscape. 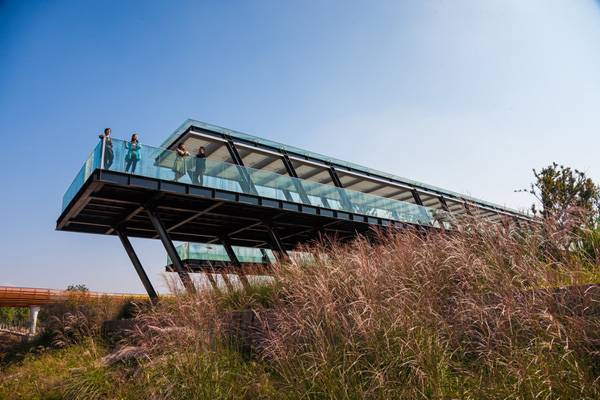 Designed by Professor Yu Kongjian and his team from Turenscape, Kongjian had a special attachment to the park as it was built in the city and near the river where he grew up, and because of this he sought to design a space that was ecologically sensitive to the land, and one that could rehabilitate his beloved river that had been overtaken by infrastructure. 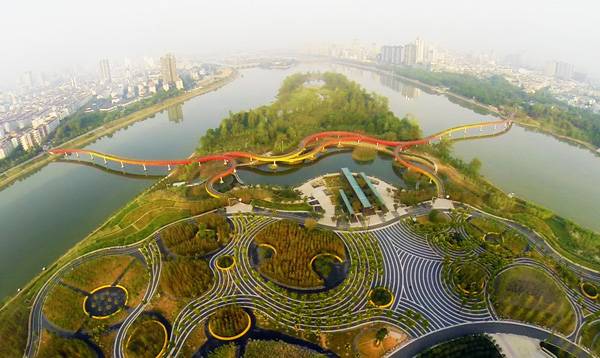 What Professor Yu Kongjian has to say about Yanweizhou Park

“My mother river, the Baishaxi Stream (a major tributary of the Wujiang River), is not a simple stream but an ecological infrastructure. It provides essential supplies, it carries of lives, culture, aesthetics, and enlightenments for people throughout the watershed. It is a social infrastructure, an experienced network, and a carrier for the endless memoires. All of these have inspired me the solution to rehabilitate her: Rebuilding society, as rebuilding ecology, should start with the rehabilitation and construction of these essential ecological infrastructures,” he wrote for Turenscape shortly after completion of the park. 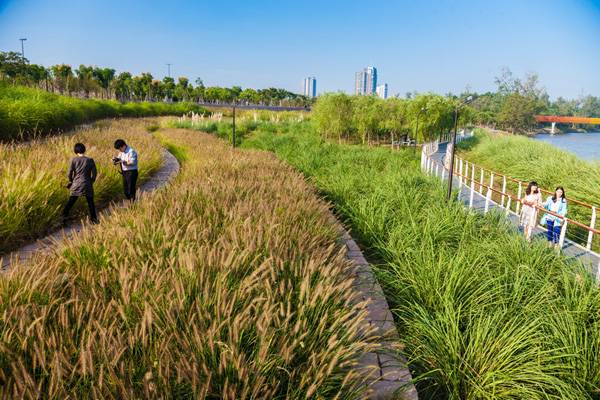 The Centerpiece of the Park  The centerpiece of the park would have to be the sightseeing footbridge, or Bayong Bridge, which extends in a South-North direction for 764 meters. The bridge starts at nearby Jinlongwan Park and crosses over the Wuyi River and Yanweizhou Park, then over the Yiwu River before ending in nearby Wuzhou Park. The bridge not only connects the three parks, but also the people of the city that are separated by the rivers. 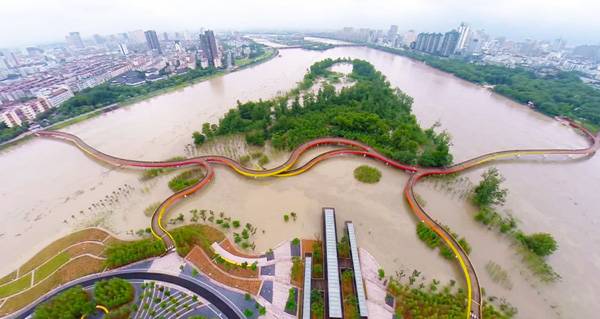 According to Kongjian, locals refer to the bridge as “the most poetic pedestrian bridge,” and with an average of 40,000 visitors each day since opening in May of 2014, it would seem that many agree with this description. 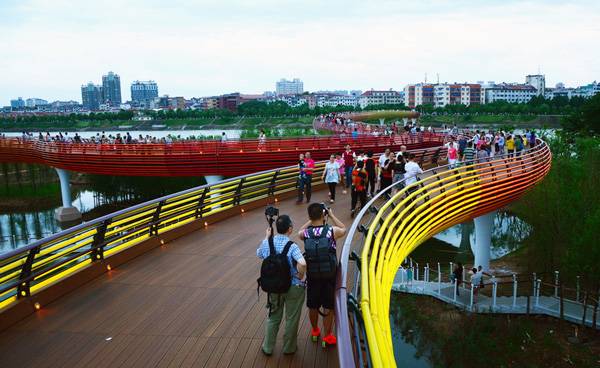 The Wetland and Terraced Styled Levees This park is more than just a place for the people, it also a park built for the environment. Two other features are the Yanzhou Ecosystem Wetland, which preserved existing wetlands, and terraced style levees, which allow the space to account for flooding and allows the park to be submerged during storms. See these other projects from Turenscape: 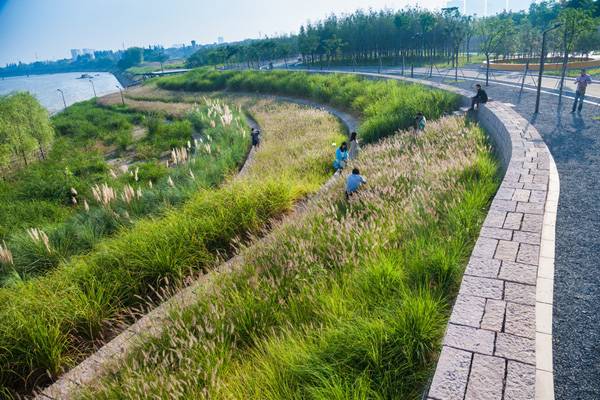 Konglian writes on the Turenscape website, “The project serves not only as an ecological infrastructure but also a social infrastructure that promotes a harmonious lifestyle to the local communities.” 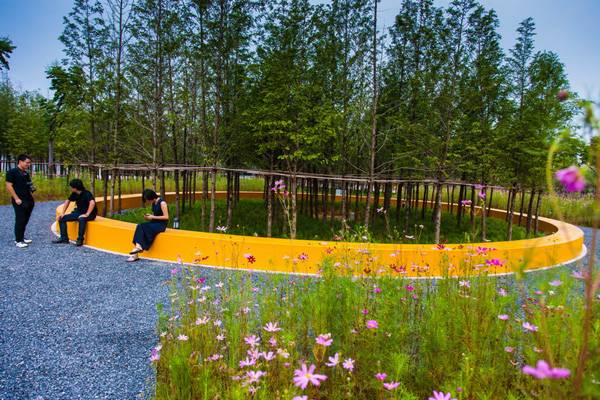 Increasing Signs of a Shift in Landscape Architecture  Projects, such as this one, that not only preserve existing ecology but also seek to rehabilitate ecology that has been taken away are becoming more and more common in the world of landscape architecture. This really should come as no surprise since landscape architects main role is to serve as the stewards of the environment. 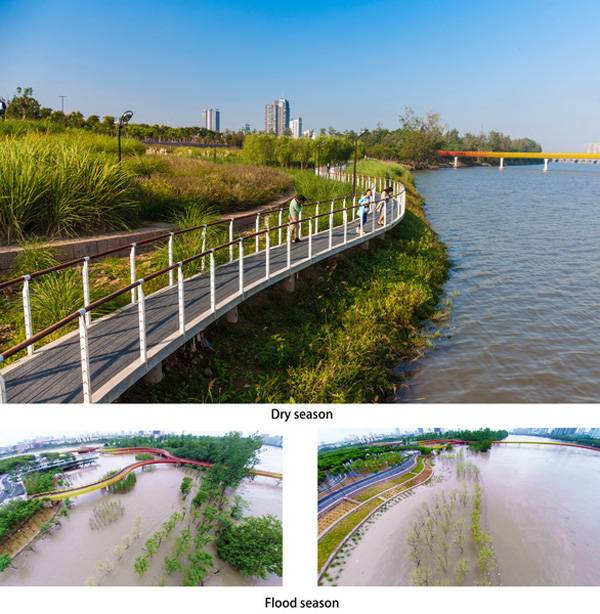 Unfortunately, in an ever-growing world where space is quickly becoming limited, the preservation of ecologically vital areas is not always at the forefront, but Yanweizhou Park is proof that it is possible to bridge the gap between the social and ecological needs of the people and still create a beautiful and functional space. Recommended Reading: