A new Google Street View hack called Urban Jungle Street View takes the greening of cities to new extremes. Generated by Swedish developer, Einar Öberg, the instant greening is made easy on his website: users simply “visit any place available in Street View by entering a location, drag the map to browse around and drop the little guy on a road.” From there, the familiar world of Street View gives way to a lush, hazy scene that evokes both sustainable utopias and post-apocalyptic ruins. 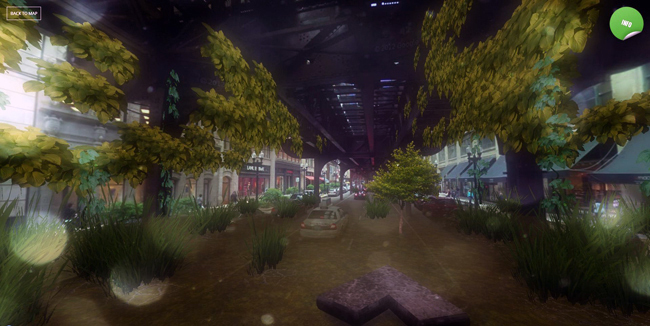 Öberg explains that the project makes use of depth data, which is an undocumented aspect of Street View, to accurately orient and place the vegetation geometries onto the surfaces of building facades, streets, and sidewalks.

The views with large buildings covered in tangled vines are quite convincing, but when one navigates outside city limits, things get weird:

Floating shrubs aside, this experiment gives rise to some interesting scenarios for landscape architects to consider. One can imagine a more controlled version of this being used to generate immersive sketches, dropping clients into their sites and allowing them to walk about as they please.

Furthermore, with the aid of technologies such as Google Glass, one could imagine an augmented reality in which pedestrians, bored with their typical neighborhood streets, project new environments in front of their very eyes – skylines become snowy mountain peaks, parking lots expand into vast deserts, strewn with tumbleweed, and highways flow as mighty rivers. Suddenly, landscape architects find themselves programming new environments in a strange overlap between the virtual and the actual.

Via The Atlantic Cities and The Verge

Lead Image Via The Atlantic Cities

Kyle O’Connor is a landscape and architectural designer in Philadelphia, Pennsylvania. Follow him on Twitter at @kyledoconnor and on his blog, The Municipal Interface.
Published in Blog