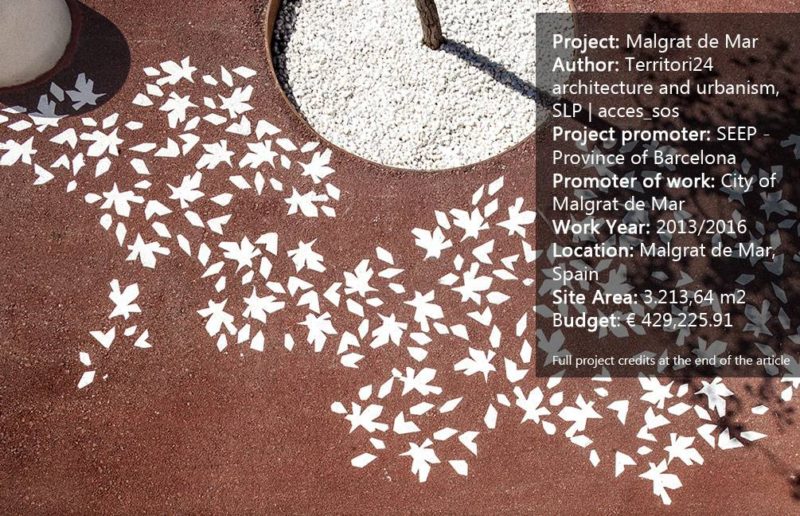 Article by Kamil Rawski – Malgrat de Mar by Territori24, in Malgrat de Mar, Spain, showing how collaboration with local residents can become the easy way to revitalize the neighborhood. The Barri del Castell neighbourhood is located in Malgrat de Mar – a seaside town in the province of Barcelona. It belongs to the Maresme region and approximately 18,500 people live there. The place where the project is located was built on former farmland and became an area of unplanned urban growth. The neighborhood’s needs have changed over past 25 years, which has been noted by the town council. Elements that distinguish Barri del Castell from the rest of the town are its origins, the economic and social status, and of course its topography. The district is situated near the town centre, between the steep slopes of the Castell hill to the southeast and the Sant Genis river to the northeast. These physical barriers interrupt the town’s urban fabric. Social inequalities are the result of the arrival of immigrants who settled on this area during the 50s, 60s and 70s. 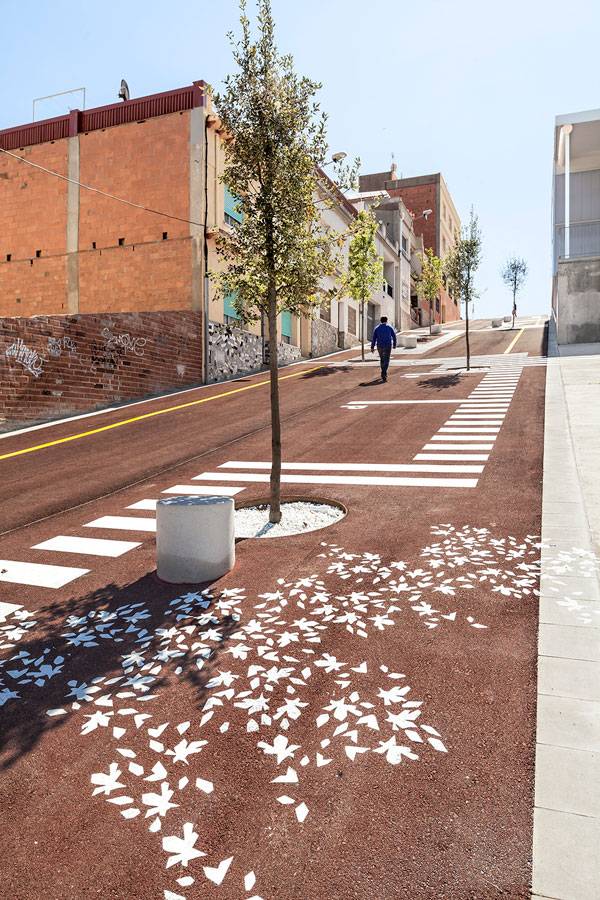 Both ends of the neighborhood have been earmarked within the town’s general urban planning as two sectors for urban improvement. It’s because they were the most neglected places. Despite the regeneration of the urban fabric and buildings, and the reduction in social inequalities, Barri del Castell still needed a solution to become a more integrated part of the town.

Aim of the Intervention

In 2009, Territori24 began to research within the framework of the acces_SOS project into urban public space and its accessibility for all sectors of the population. They organized a workshop with local residents and established that the streets of Barri del Castell can become places where social ties could be rebuilt. Thanks to collaboration with local residents, the designers had the opportunity to detect the flaws and needs of the neighborhood. The result was to focus on problems of accessibility and quality of public space. The street had to become an urban square by designing urban elements, road signage, and an arrangement of handrails, benches, and trees and to free the road of excessive traffic. 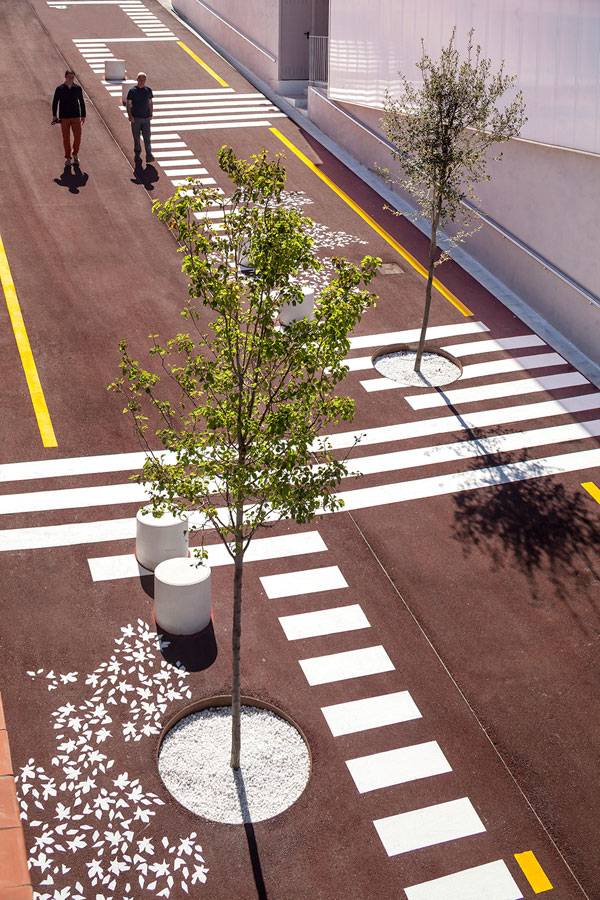 Idea of Project The main aim of the project is to transform four streets: Segre, Montnegre, Tordera and Montseny (for now; the last one still waits to be completed) into pedestrian-friendly spaces. Designers want to improve the conditions of accessibility and the quality of the public space by creating a zone where pedestrian mobility is complemented with vehicle mobility.

To achieve these goals Territori24 proposed:

Improving the area’s physical conditions of accessibility, for which it is important to reduce the road space for vehicle use and incorporate handrails; and ensuring that the street’s circulation rules are easily understood by clearly marking the areas for vehicle and pedestrian use, by way of a specific signage system in white non‐slip paint. The parallel white lines mark the areas for pedestrian use and the yellow lines indicate private driveways and areas where parking is prohibited. 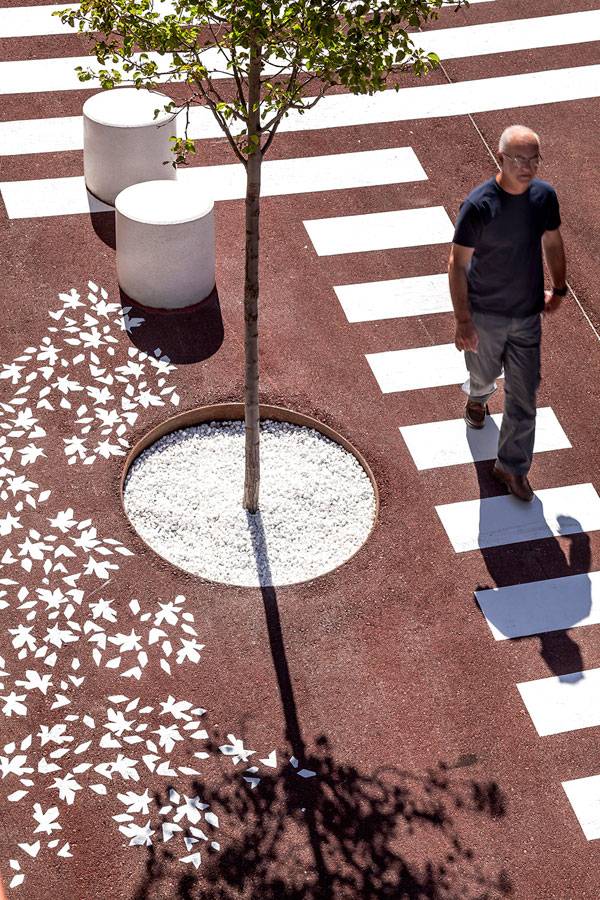 Due to times of economic crisis, these interventions could not be expensive. Territory 24 had to find the way to reduce costs. Together with a La petita dimensió group, they developed the concept to design the street that gives a new reading of space by using only necessary elements or replacing them with paint. For example, to force cars to slow their speed, they were routed through a winding road by using the pedestrian crossing stripes in different lengths, emphasizing the unique platform. 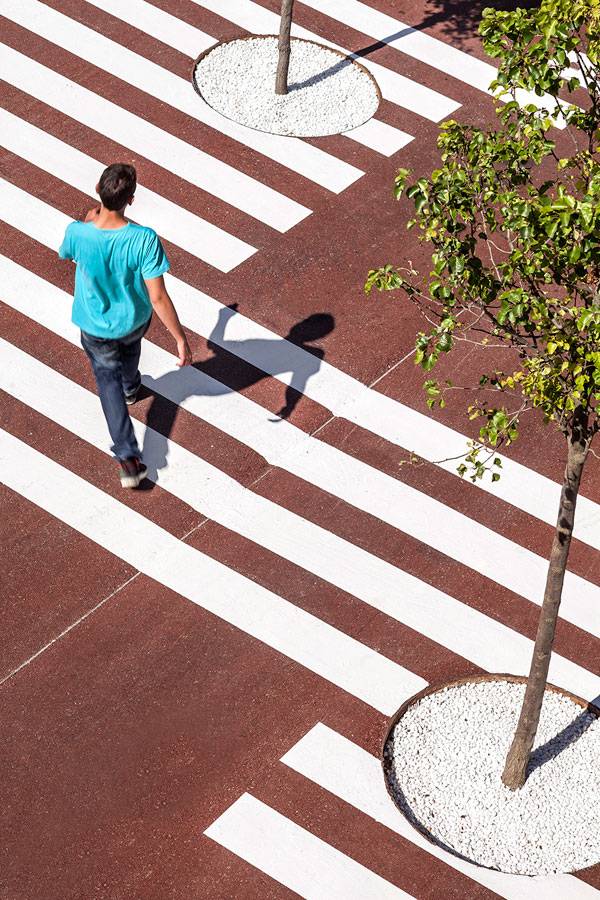 A graphic set was designed, based on patterns of leaves, and constitutes a distinguishing element for the streets. They are painted onto the surfaces and form a white carpet of leaves that recalls the shadows of trees. To achieve consistent and continuous space, they designed a russet asphalt floor which makes no clear distinction between the street’s different uses; pedestrian circulation, vehicular circulation, parking, etc. They also provided a single‐level asymmetrical street and an off‐centre thoroughfare for vehicles located 1.5m from one side and 3.5m from the other, as well as the stopping points that encourage relations between neighbors. 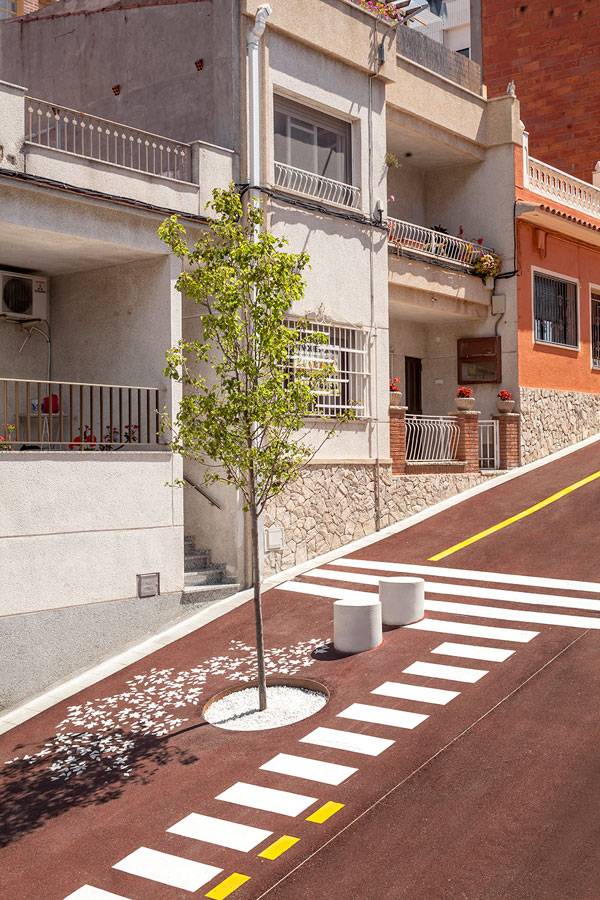 Participative sessions with local residents revealed the need to maintain some parking spaces, so designers decided to make three of them in each street. Their placement responds – according to a study – with entrances to existing homes and possible future entrance ways. The project also incorporates small concrete squares into the streets Tordera and Montnegre as rest places and elements of the small square as meeting places. 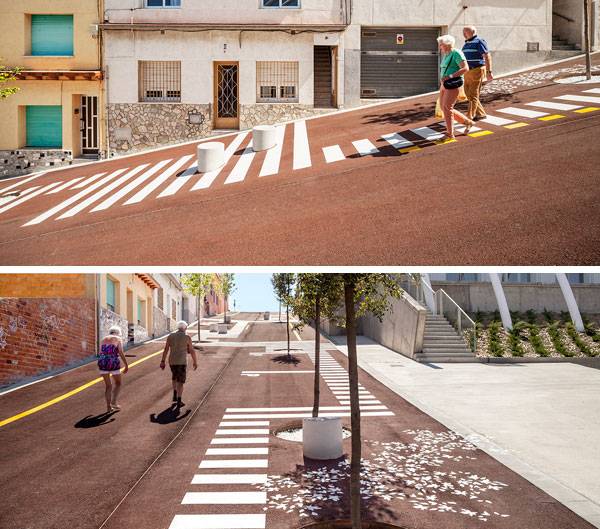 Vegetation and Equipment To make space more enjoyable, vegetation and urban furnishings have been introduced to the project. The streets are planted with evergreens, which aren’t used as shading elements because of their location. Designers also planned concrete circular seats along the length of the street, as well as wastepaper baskets. These are used instead of traditional bollards to deter excessive traffic. Given the steep gradient (between 14% and 20%) designers thought about sections of handrails, attached to the façades, to facilitate walking up the streets. This design is good example of how creativity and dedication can reduce costs. Local residents have actively collaborated in defining the problems and the solutions. The project includes no superfluous elements and combines elements with functions like bollards as seats or paintings as boundaries. Certainly, participating with local residents in this project was one of the things which caused it to succeed. Do you think that this project would be successful without collaborating with local residents? 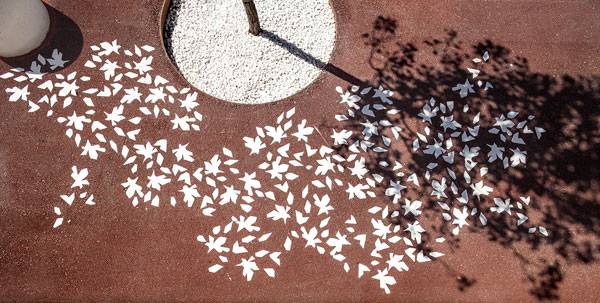