We have got an excellent, fresh set of sketches from our readers for this weeks Sketchy Saturday, to pick our top 10 for this weeks Sketchy Saturday. Be it colour or black and white, technical or artistic, work or pleasure based, we know a good sketch when we see one! Drawing is one of the best ways of improving your work and should never be fully replaced by tech shortcuts! So without further ado, here’s this week’s selection. No. 10 by Tomislav Krnač, Slovenia 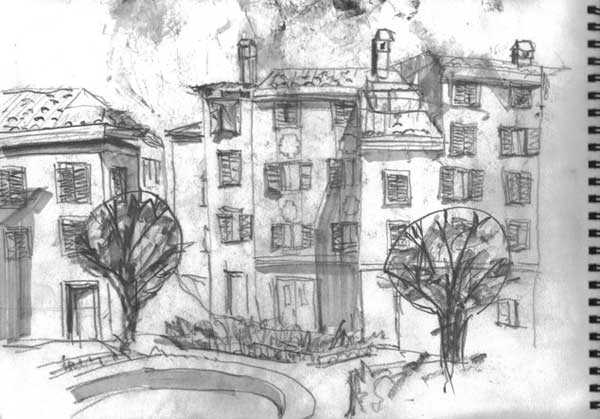 ‘I drew this sketch in the Mediterranean village of Izola in Slovenia on a beautiful sunny day. We had an excursion with prof. Drašler who taught us drawing in 1st and 2nd year of landscape architecture. I was sitting on a bench in a picturesque little square surrounded by old houses and Mediterranean plants, so I decided to make a quick sketch of it. I used a 6B pencil and a grey promarker.’ No. 9 by Mahmudul Karim Ripon 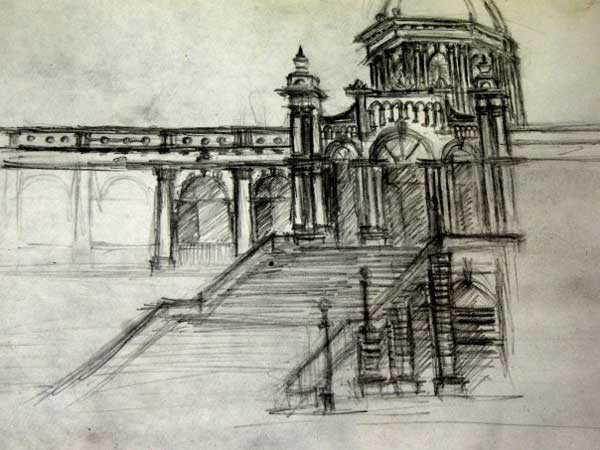 ‘This is a sketch of Ahsan Manzil in Dhaka, Bangladesh. The official residential palace has a beautiful architecture with multiple design details which were, for the most part, drawn here. I focused on the main entrance of the palace and its main detailing. The sketch was done in pencil. ‘ No. 8 by Amaury Martins Neto, agronomic engineer/landscape architect, Piracicaba SP – Brazil 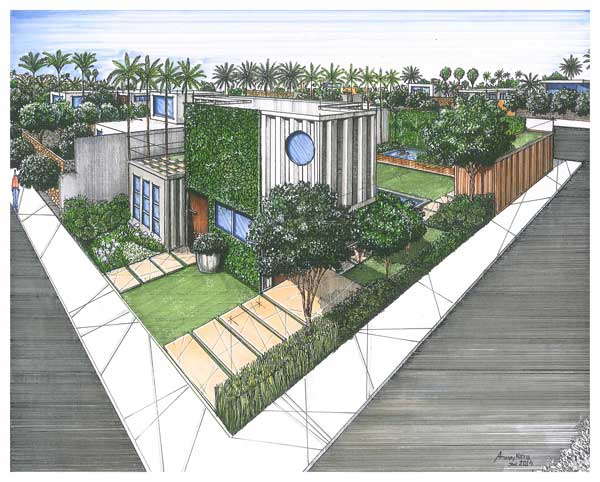 A two storey house made of four shipping containers

‘I started this project because when working with landscape architecture, you always have to think about sustainability. With that in mind, I designed this two storey house made of four shipping containers and added one more for a studio/guest room. Another idea for this particular design is to show that even with such a small terrain (200 sq. meters) you can have a nice home and a very cool and modern garden designed with native plants.’ No. 7 by Amaury Martins Neto 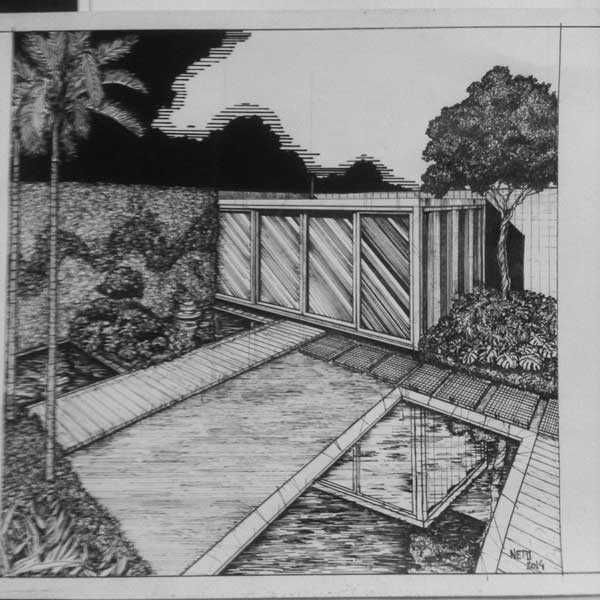 ‘This is a conceptual illustration for a container house. The drawing represents a studio made from a 20ft shipping container. The landscape consists of two water features, a vertical garden, wood deck and pool,  designed only with native plants.’ No. 6 by Irene Morales, 3rd year landscape architect student at the University of the Philippines, Dilima 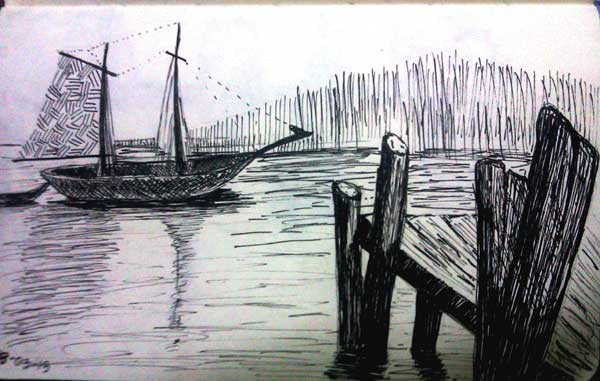 An exercise for a pen sketch

‘This is an output from reading a book on how to do pen sketches.’ No. 5 by Philip Tsui ‘I made this sketch of a Chinese traditional garden in Guangdong Province,China. Stone is an important and special element of the Chinese traditional garden, so I set the stones as the main part of this sketch. There is a wooden pavilion on the stone hill. I used pen and marker pen to colour it..’ This layered sketch attempts to have a strong impact on the viewer bringing you into the depths of the picture showing the raw lines of the original sketch while being brought to life with vivid and bold color, making for one dramatic composition.  What we love about this sketch is the honesty and purity of form, communicating a place with a lot of character, which is bound to be a reflection on the designer. 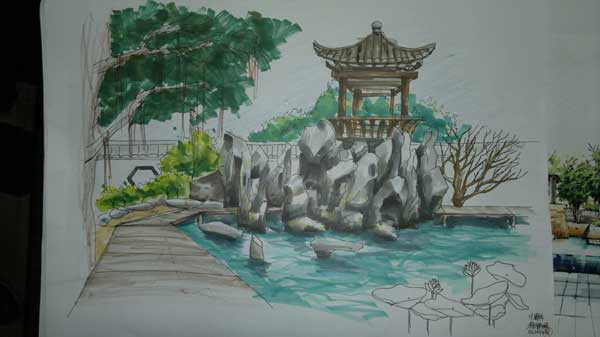 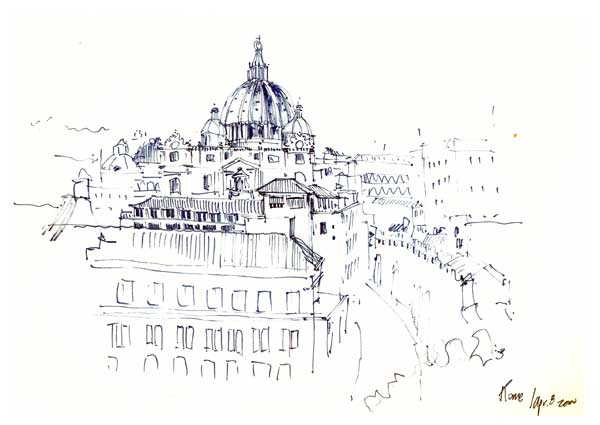 ‘This very quick sketch was done from the Castel Sant’Angelo overlooking St Peter’s basilica in 2000. The idea of the sketch was more to capture the ‘essence’ of the view rather than to dwell on the details.’ No. 3  by Rebecca Blanck-Weiss 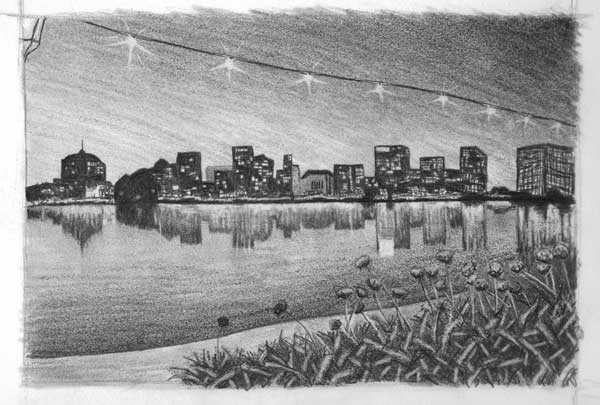 ‘This scene of Oakland, California’s Lake Merritt Promenade at night was sketched using a 2b pencil and a fine tipped eraser. There is a string of lights wrapping around the lake along the path that beautifully reflects the lights of the city, which also surrounds the water. This community space, bustling with people walking, biking and running all day is very still at night.’ No. 2 by Devin Kimmel 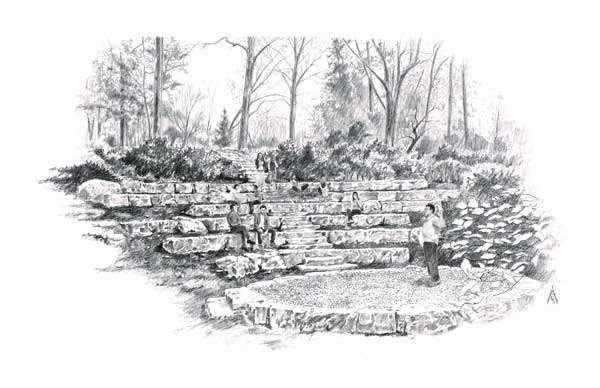 ‘This is a sketch of a new woodland amphitheatre for a private school. Its purpose is for outdoor teaching and events. The amphitheatre is set in a beautiful natural ravine overlooking a creek. This sketch was done using graphite on vellum.’ No. 1 by Alexander Kok, professional visualizer, Noordwijk, Netherlands 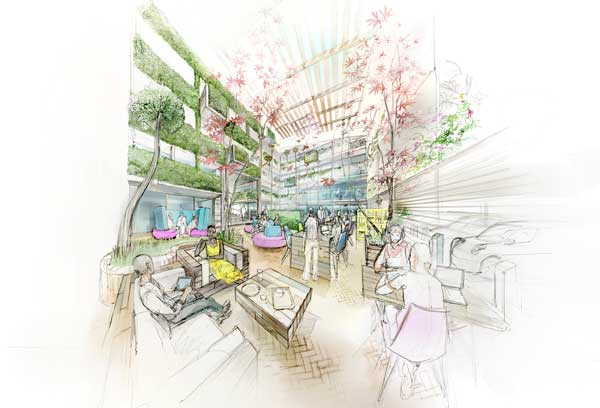 ‘This is a plan made to redevelop an old office building in the heart of the city of Amersfoort, Netherlands. The project is named Business Garden and the sketch’s purpose was to create an idea of a garden and work space in the atrium with the other units  individually rented by small companies. The whole idea had been based on the concept of zero carbon/low ecological footprint developed by the Dutch based One-Planet foundation. The project was initiated by British/Norwegian engineer Paul Heistein, who is a specialist in the use of alternative energy sources and connecting the various participants involved. One Planet Foundation will have their headquarters in this building..’ Thus, Sketchy Saturday, version 009 is concluded! It was a tough choice, as per usual, because each sketch has something special. If you enjoyed this week’s selection, check out our previous edition. Don’t forget to send your work along with a short description of the sketch to get a better chance of having your work selected for our weekly Sketchy!  See you next Saturday! Article written by Oana Anghelache. Published in Blog