Today I invite you to take a trip through Spain to learn about the classical gardens of Spanish Landscape Architecture, both in history and in contemporary times. We all know the major achievements of the 17th century garden designer André Le Nôtre, from his work on Versailles to Vaux-le-Vicomte. What is equally as remarkable, however, is how his cultural and artistic influence spread throughout the European countries. Some of Spain’s finest examples of classical gardens, including El Retiro Park in Madrid and the gardens of the palaces of La Granja in Segovia and Aranjuez, were created by gardeners and hydraulic experts brought in from Italy and France. 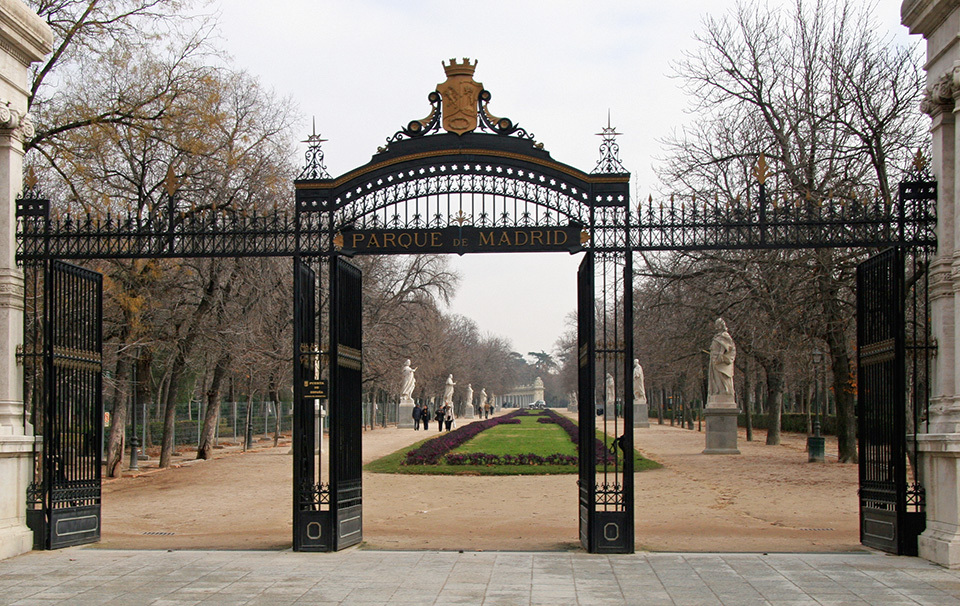 When entering El Retiro Park from Paseo del Prado in central Madrid, the first thing you will notice are its  large gates alluding to the royalty who once owned the property. Because of the gates’ stately presence, it was surprising to learn that the park was originally created as a spiritual and contemplative garden for its founder, King Felipe II. After its first broke ground in 1633 during the Renaissance, the garden was then expanded over the span of four centuries to become one of the largest parks in Madrid. It finally opened to the public in the late nineteenth century and is now the most popular park in the city. 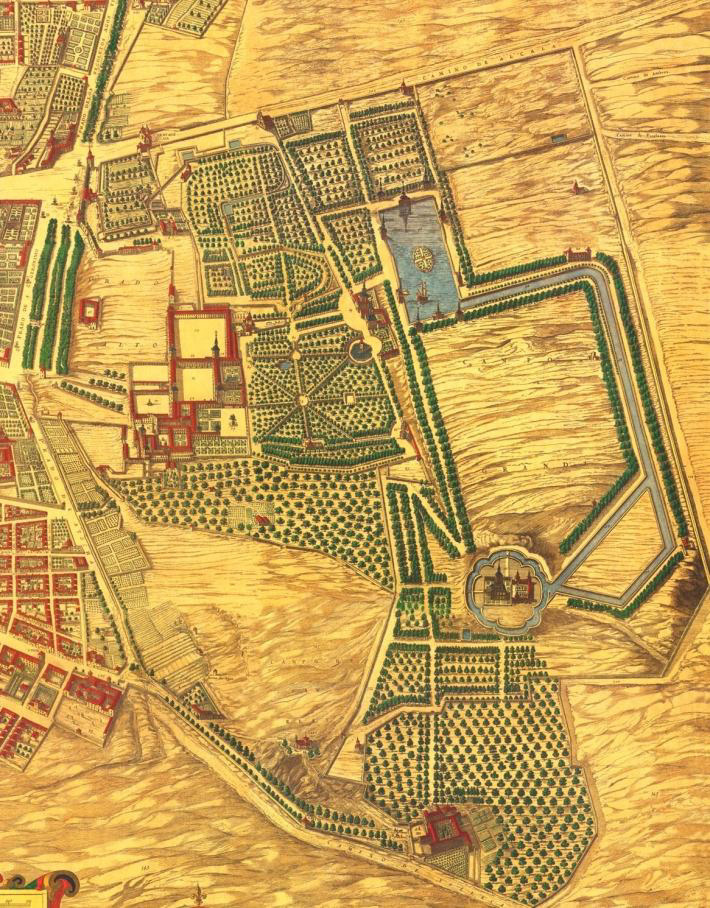 The park’s main paths and axis are extensions of the city streets that lead to the main areas and focus on long views and longitudinal perspectives. The park invites you to walk between rows of plane-trees, elms and oaks. Despite the steep slopes of the terrain, the flow of people leads immediately to the heart of the park, the great waterway pond centered on the equestrian statue of Alfonso XII. 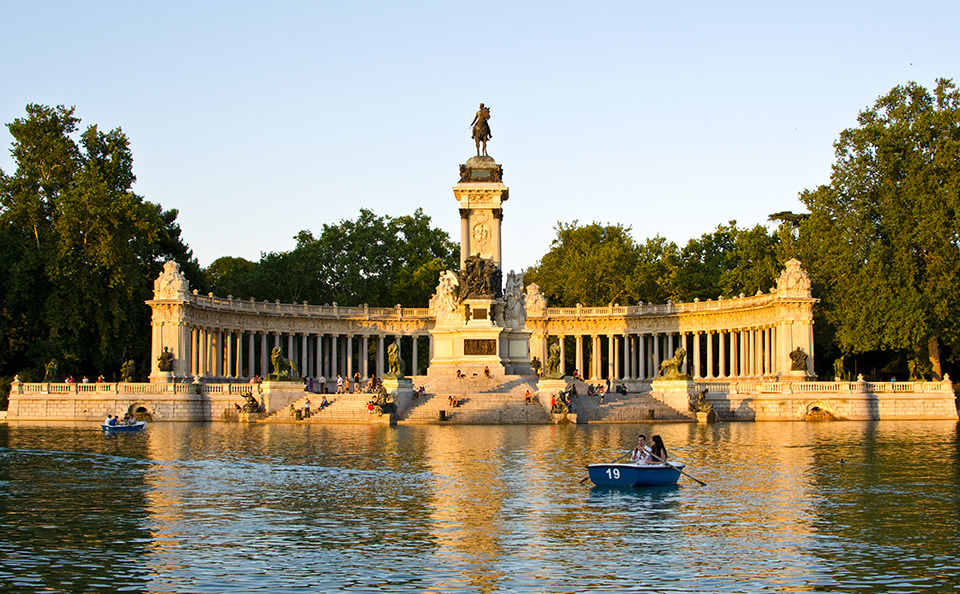 The park is a conglomerate of spaces difficult to define, seemingly without a unified plan. One of the virtues of the park is the richness and variety of tree plantations and the white sculptural decoration that punctuates the rows of trees. 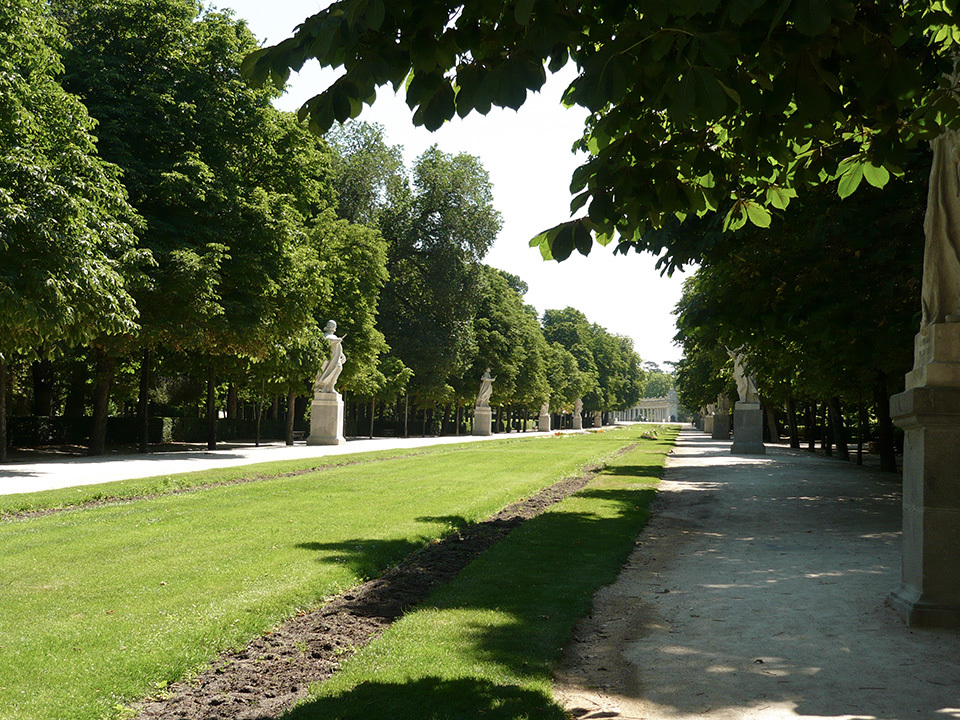 The park hosts multiple activities, making the space one of the most popular areas in Madrid. Thousands of people come for the year-round markets, fairs, cafes, and open-air museums. Magnificent architectural examples characterize different areas of the park. The nineteenth century Crystal Palace, for instance, is a museum for exhibitions of contemporary art and exudes a romanticist atmosphere. It is designed in the pinturesque gardening style, characterized by specimens of Taxodium distichum, with its roots submerged in an artificial lake. A botanical trail leads you to the other lush areas of the park that show off the poplars, rose gardens (the roses were imported the most important gardens in Europe), perennial gardens, and Cecilio Rodriguez gardens. The French Parterre is featured in the park as well, and its strict symmetry is broken only by the presence of two large cedars and a cypress–the oldest tree in Madrid–a Taxodium from Mexico that is over 400 years old. 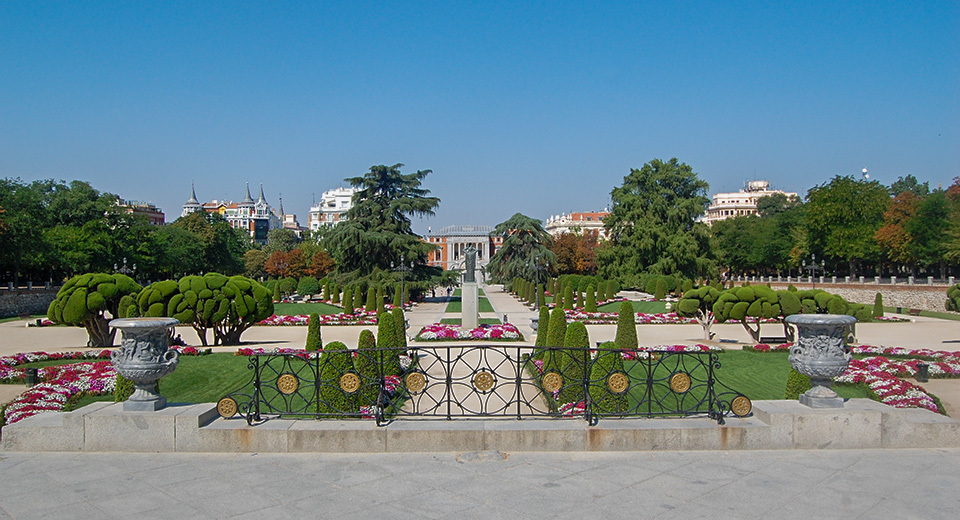 El Retiro has many fountains, including the Fountain of the Fallen Angel, possibly the only monument dedicated to the devil in the world, and represents the moment when Lucifer is expelled from Paradise. 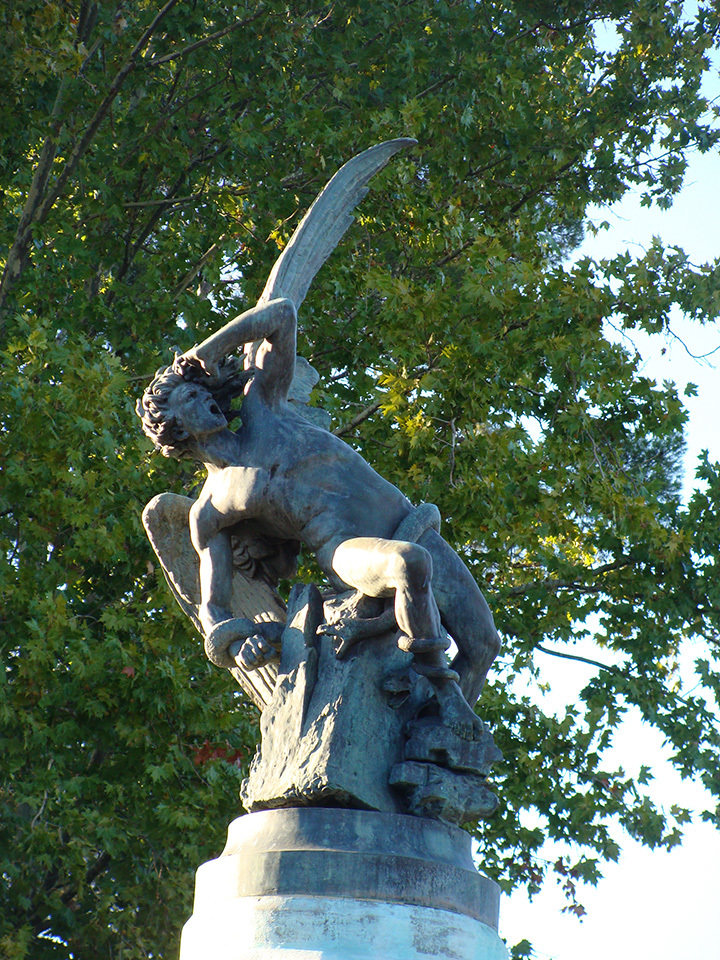 Fountain of the Fallen Angel

If we go north of Madrid to the city of Segovia, you’ll find the magnificent Palace of La Granja. Its gardens are the epitome of the Baroque garden style in Spain. Located in a boxed enclave in the foothills of Sierra de Guadarrama, the garden is modeled after the French gardens with its parterres, high hornbeam hedges and woodlots that forming a rectangular frame. French gardeners brought by Felipe V in the mid eighteenth century build this garden in the likeness of Versailles. To fully understand this garden, you must visit its eleven magnificent fountains, which are combined with sculptural groups with mythological references, The Bath of Diana, The Fame, and The Horse Race fountains fill the space with water and sound. The “Sea” is a large lake located at the top of the site and collects water from the Valsaín mountain to feed all the fountains and cascades. 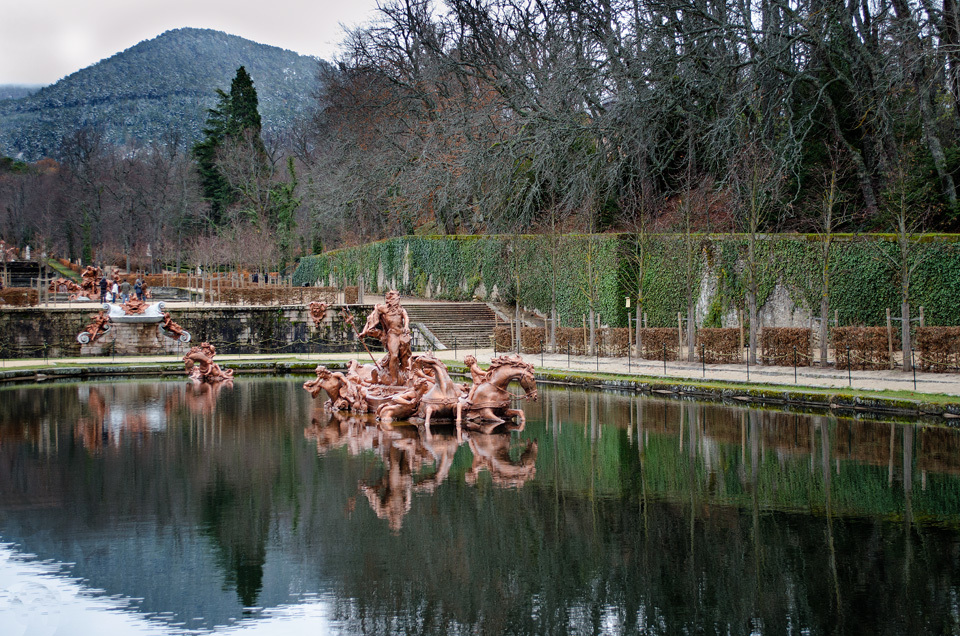 Fountain of the Horse Race 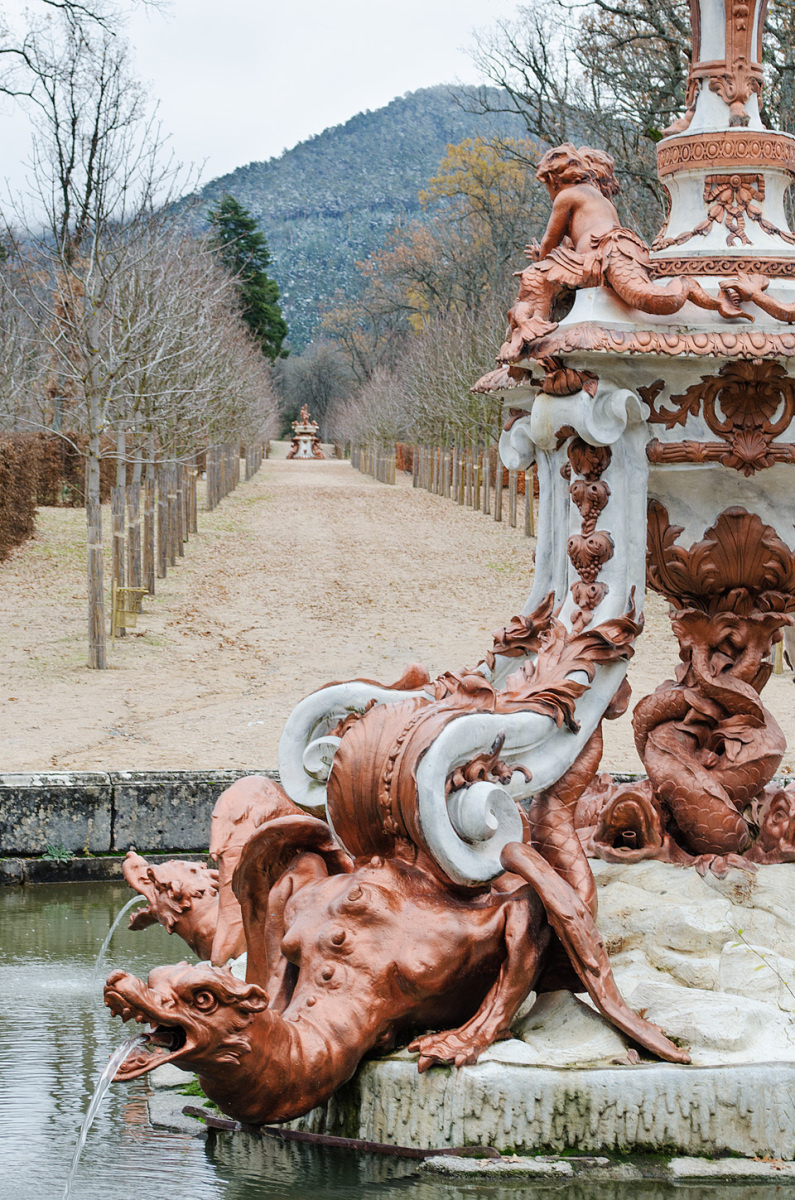 Fountain of the Dragons

A large parterre in front of the main facade of the palace occupies the central axis with a dramatic waterfall that creates structure to the garden. The Labyrinth is a main point of interest and is inserted into a forest of oaks, elms, linden, beech and conifers. 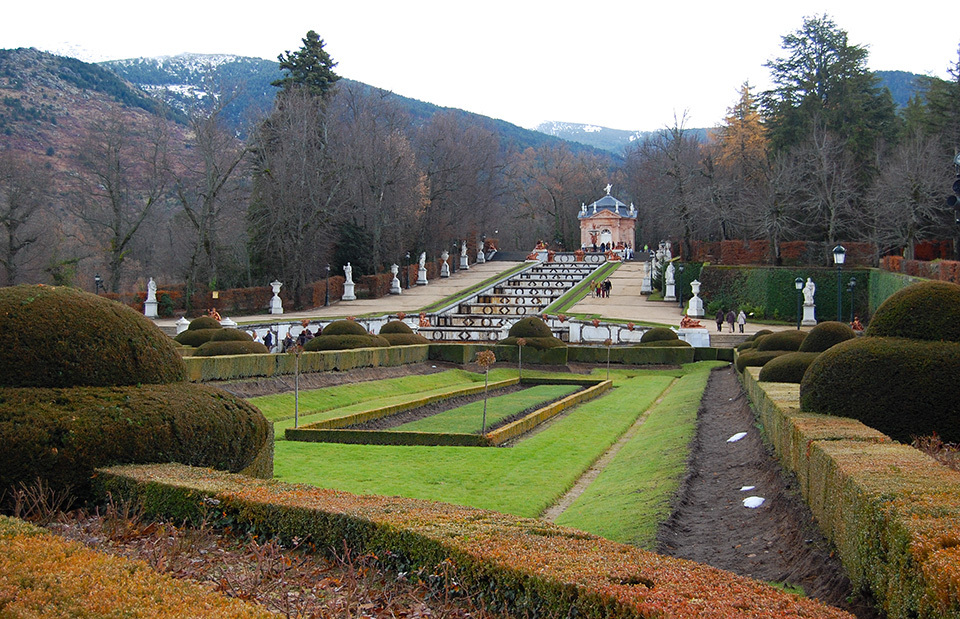 Parterre of the Palace 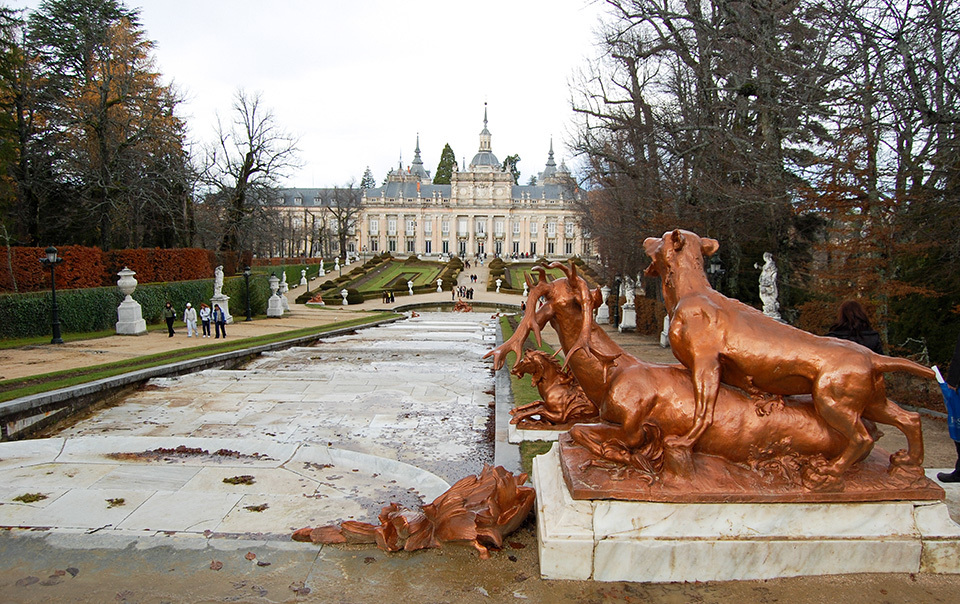 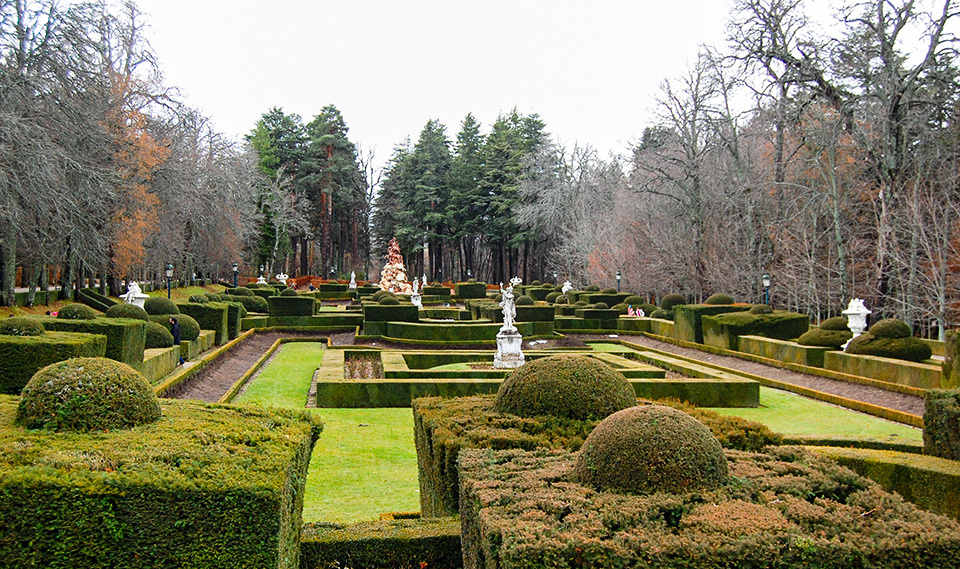 Parterre of The Fame

When you come to visit the garden, you should try and come either during late spring or fall/winter. The changing colors of the leaves and fallen snow on the sculptures and fountains make for amazing compositions. Those headed south of Madrid should visit the Aranjuez Gardens located on the banks of Tajo river in a privileged microclimate. The gardens consist of different grounds: “Jardin de la Isla” traced in the sixteenth century for Felipe II in the Italian Renaissance style; “Jardin del Rey” near the palace; “Jardin del Principe”; “Jardin de Isabel II” in the last set; and “El Parterre” that’s situated opposite the palace and offers an organized French scene with magnolias, vases and trimmed hedges. 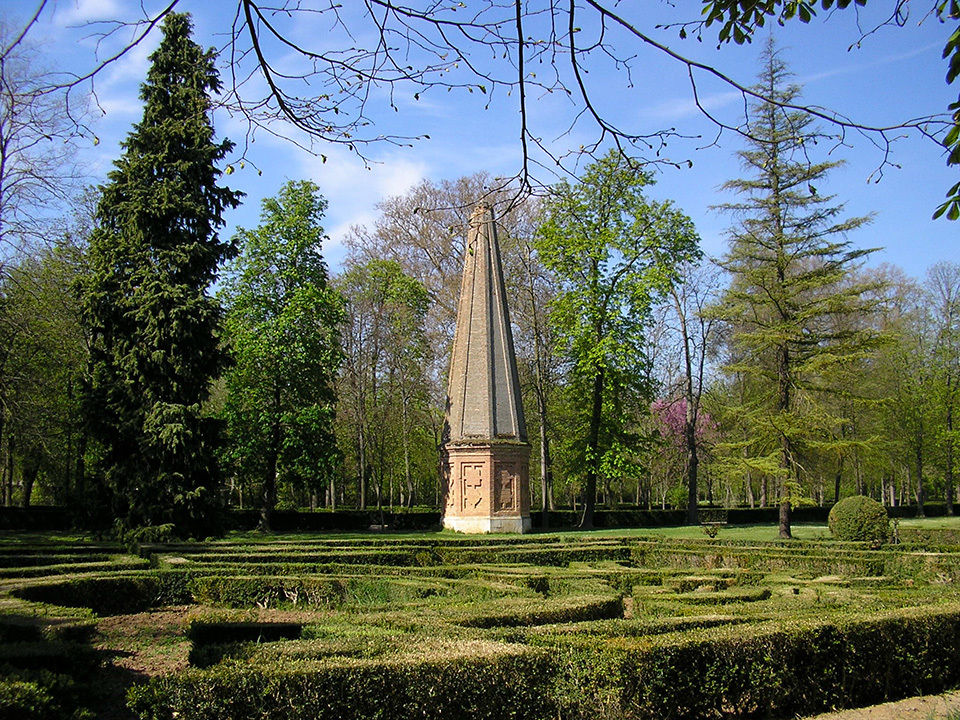 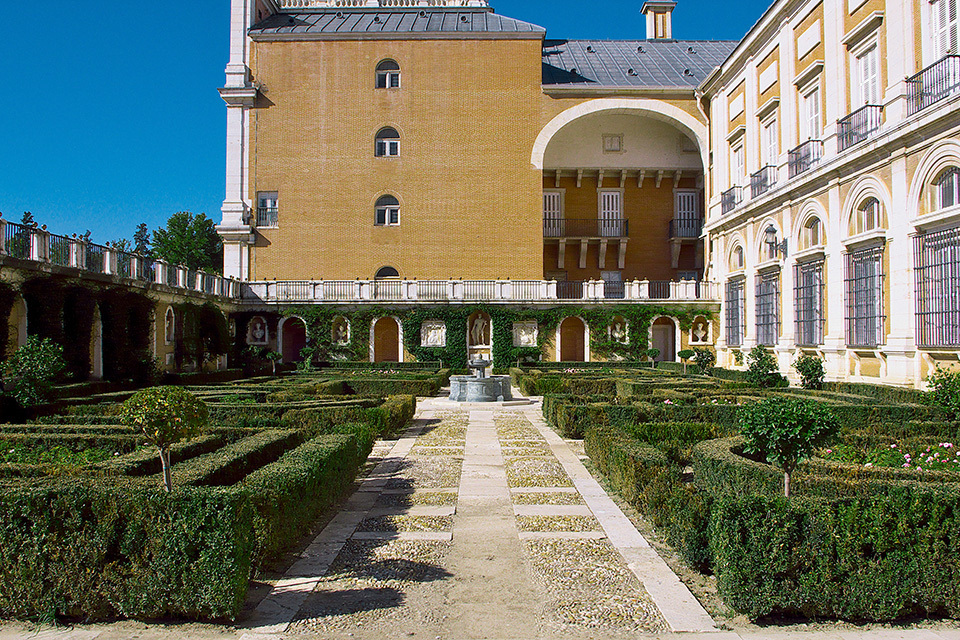 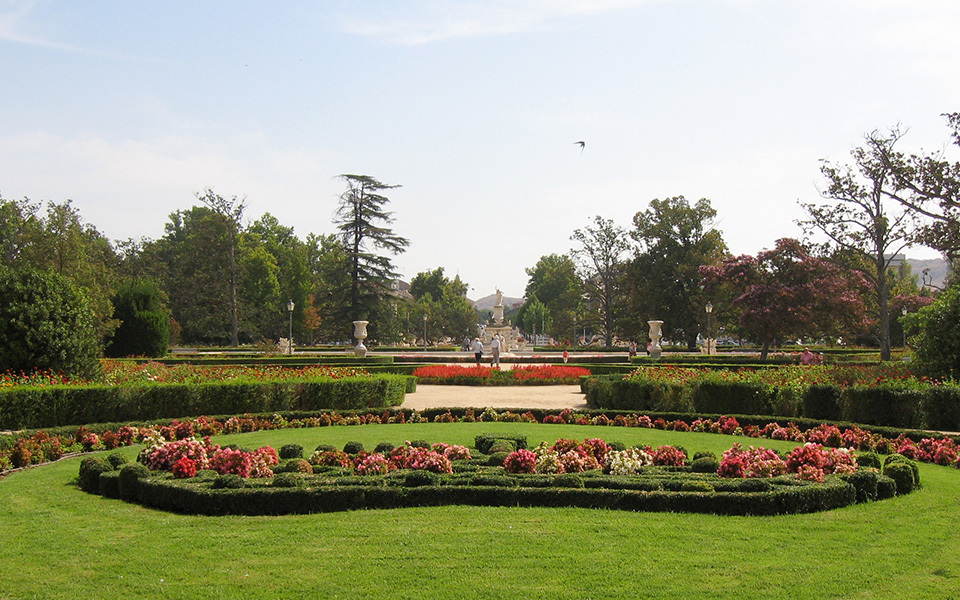 Although the grounds aren’t as rational and symmetrical as André Le Nôtre’s landscapes, the rich vegetation and Platanus trees gives the meandering place a special charm that creates a quiet respite from the traffic of Madrid.

Other classical gardens that deserve a visit include El Pardo Gardens and Alameda de Osuna in Madrid and San Lorenzo del Escorial Gardens.