Netherlands Army Museum and Netherlands Air Force Museum Landscape Design, by H+N+S Landscape Architects in the Former Airbase Soesterberg, the Netherlands. War is a painful, devastating, and dynamic situation. Maintaining the memory of such events is hard, yet necessary in order to protect the next generations from repeating the mistakes of the past. This should be the purpose of a war museum nowadays. The landscape design for the Netherlands Army Museum and the Netherlands Air Force Museum sheds a new light on the concept of memory and provides a new perception regarding our notions of war, history, and the armed forces. 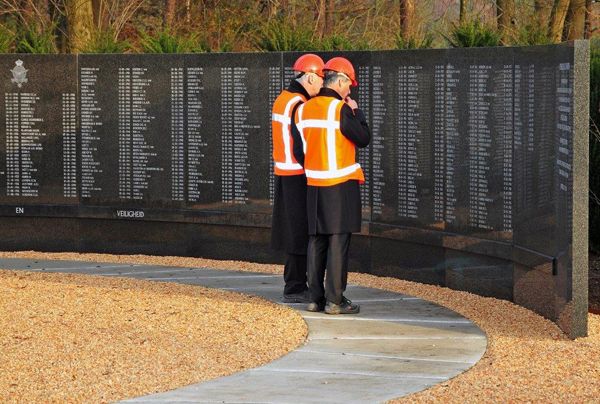 Inspection by a senior military of the monument in its new context of the new memorial garden. Photo courtesy of H+N+S Landscape Architects

The complex that houses both museums is located in the facilities of a former military airbase called Soesterberg. The location bears traces of World War II history and NATO use, and also maintains important natural qualities. What is truly fascinating about this project is that what once used to be part of the military facilities has been restored into a natural reservoir. It appears as if nature has taken its toll over human action. The museum complex seen from above seems to have been invaded by the adjacent forest and heath. This coexistence forms a dynamic relationship between the building and its surroundings, which gives more emphasis to the museums’ character. 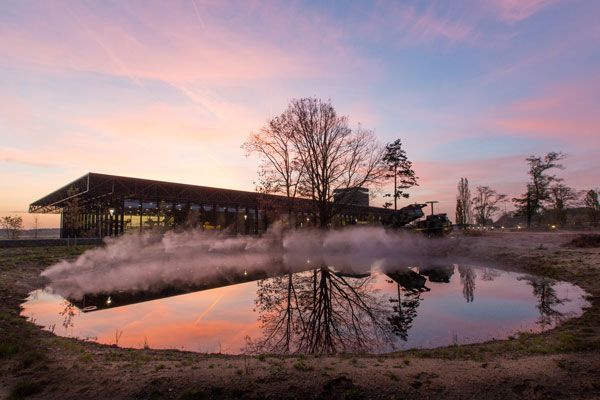 The fog fen in front of the National Military Museum in Soesterberg, The Netherlands, that opened its doors on December 11. The museum park of 45 hectare is designed by Dutch firm H+N+S Landscape Architects. It surrounds the museum with nature and air force heritage and is visible in each direction as a backdrop to the museum collection.

The intervention has dealt with the following issues:

The museum complex is divided into three terraces. Each terrace has a special function. The top of the hill is a natural landmark surrounded by a heath valley. On the middle terrace — where the visitor arrives — the history of the area is displayed. The museum complex itself has been situated near the runways. The arena is on the lowest level, and there is a memorial area with garden and plaza on the east side.

A Section of the museum entry, with the entry bridge above the fern garden, connecting the museum to the gabion wall that marks the mid-level terrace with several hidden bunkers. Image courtesy of H+N+S Landscape Architects

Preserving History Through Design The structure of the former military base has been preserved. Elements such as the gabions wall that was originally used for military purposes now forms part of the retaining walls. Crumbled remnants of a hangar entry platform have been left onsite to recall a trace of the past. This gesture gives destruction an almost poetic dimension. A new interpretation of military elements redeems them from their former role and invents a new use for them. Related Articles: 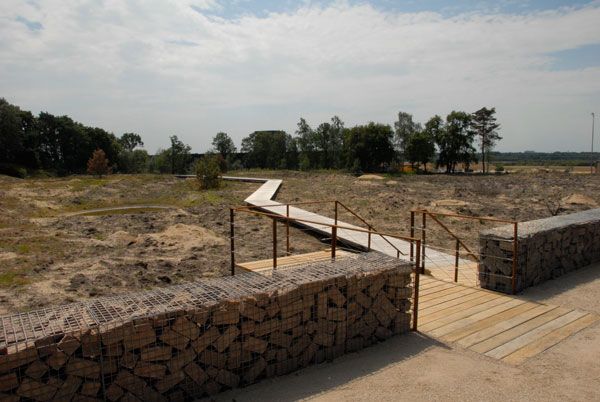 View from the Belvedere over the heath valley, with raised path along fens, towards the museum. Photo courtesy of H+N+S Landscape Architects

The Style of Planting  The planting scheme plays an important role in the intervention. An inviting and ecologically significant forest has been developed around the museum complex. The innovative planting plan was put together in collaboration with forest ecologists and was inspired by natural forest dynamics. The Purpose of the Memorial Garden The memorial and the memorial garden have been clearly outlined in the master plan. This is an introverted open space that allows for reflection and silence. The planting scheme bears various connotations that enhance the strong symbolism of the garden. The monument is surrounded by a large, round taxus hedge. 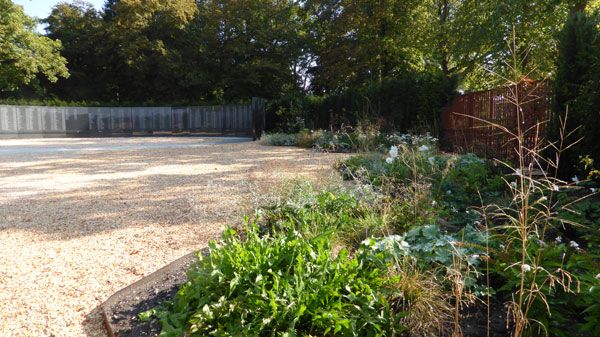 Memorial garden in its first season. The monument is surrounded by a large round taxus hedge, embracing a space with borders in color palettes. They tell a story that leads from war –red-, via emotions –purple-, reflection –blue-, towards peace –white-. Photo courtesy of H+N+S Landscape Architects

The robust form of the hedge creates a sense of enclosure while being outdoors. Along the hedge, a planted area with borders in color palettes has been created. The blooming color variations tell a story that leads from war, which is red, via emotions, noted with purple, toward reflection colored with blue, and finally reaching peace that has been marked with white. 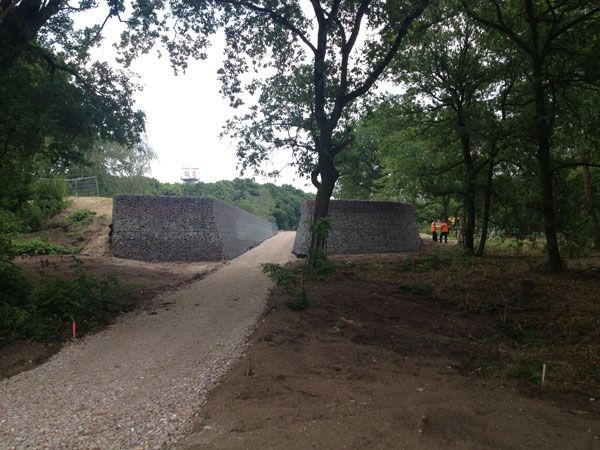 Construction of gabion stronghold, creating the entry path towards the arena.Photo courtesy of H+N+S Landscape Architects

The museum complex entryway is elevated above the ground. It seems that one has to become detached from the surroundings in order to enter the museums. This sense of transcendence can also be observed in the elevated entry bridge in the fern garden. Visitors cross the landscape, yet they are not part of it. This design gesture seems to me like introducing war history and characteristics to people, but keeping them at a safe distance from this narrative. It is an almost dramatic aspect of the intervention. 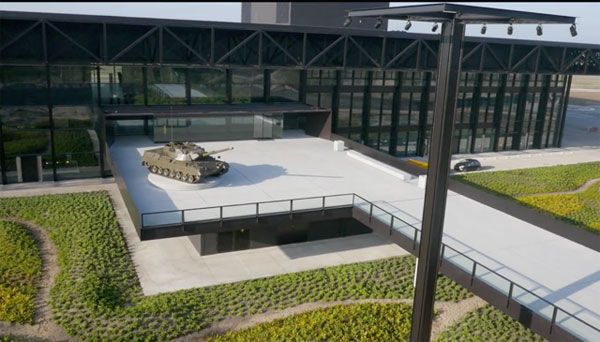 View towards the entry bridge, leading over the fern garden. Photo courtesy of H+N+S Landscape Architects

This project has managed to reveal beauty where beauty was hard to find. It has not evaded the context and the history of the place, nor did it turn away from the negative tension that the memory of war bears. The Netherlands Army Museum and the Netherlands Air Force Museum Landscape Design has taken context, history, nature, and landscape narrative a step further. Recommended Reading: