It was a hot summer evening as cargo bikes in all shapes and sizes wheeled in for Portland’s Cargo Bike Roll Call.  It is typical to witness unique rides; however, this was one different.  Attached to the bike by a steel pipe, this recreational vehicle is a concept designed and built by Alexander Main. The Bike RV Project is a one-month experiment in which Alexander sleeps in his bike RV prototype and records his discoveries.  An eBook and plans were published, free of charge, which reflect his original design, creating a crowd-sourced model and allowing anyone to access and improve. Alexander and I sat down at a local food cart for a delectable Venezuelan lunch and spoke about the vision behind The Bike RV Project, discussing ideas for the next prototype.  Tag along to learn about his exciting venture.  It could be coming to a city near you! 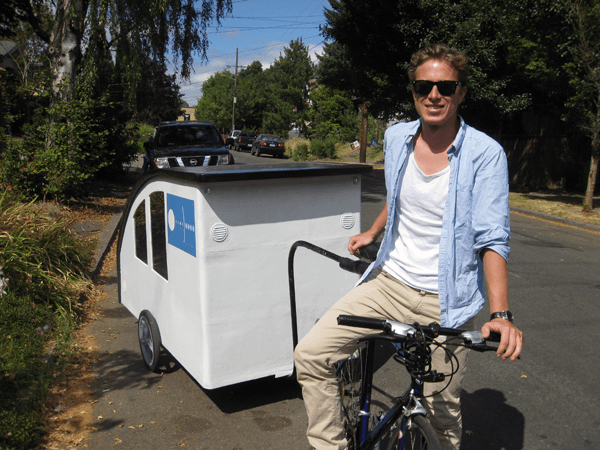 I have always been a big fan of a minimalistic lifestyle and being able to live nomadically.  This style of living enables you to be free, and freedom, to me, is perhaps the most valuable thing in the world.  I saw photos on the Internet that combined primitive living arrangements and itinerant culture, but these bike RVs were old-fashioned in terms of technology.  I wanted to advance the notion and create a high-tech, practical, self-sustainable, and attractive bike RV.
The intention is not to market a “product,” but an idea of leading a free, minimalistic, innovative, and community-driven life.  I feel the community is an integral part of the design process, and their contributions will help to support my vision.  The two major target groups include: the recreational riders (those who will utilize a bike RV for overnight purposes, replacing a one-person tent) and “houseless” people (a term coined by George Carlin).  The bike RV could function as a transition stage in their lives, getting those individuals off the streets.
I began with the main components: base, wheel system, and trailer.  The windows and doors came next, and the challenges were the design and construction of the roof.  The length of the RV was determined by my height, and the width matches that of my suitcase.  I chose to make it one piece to prevent water leakage.  The secondary components include: a solar panel, controller, and battery.  The energy harnessed from the solar panel is used to power the lighting and charge phones, laptops, and other electronic devices.  Four computer fans circulate air and act as a climate control mechanism.  The primary materials used were: plywood, styrofoam, fiberglass, and polycarbonate.

Photo credit: Bike RV Project – Conceptual ideas for future designs
Over 2,000 USD was spent on the initial-design; however, I believe I could lower the next prototype to around 1,000 USD.  The next bike RV I construct would not use fiberglass.  I would utilize a semi-flexible solar panel, an aluminum frame and acrylic windows and advance the RV to bike connection.  Ultimately, these design decisions would translate into a lighter, thinner, and greater aerodynamic bike RV.

Raise enough funds, so I can settle down somewhere, register my concept as a company, and launch a Kickstarter project.  I plan to work in collaboration with an engineer to build the next bike RV.  Additionally, I will release a free video tutorial, enlisting the community for suggestions.

I see enormous potential in solar-powered, self-sustainable, micro-bike houses.  It could be the easiest and most affordable housing alternative for millions of “houseless” people across the globe.  In addition, it may improve and save their lives!  The bike RV, perhaps, is a critical element to combating “houselessness,” serving as an evolutionary shift to a normal life.

Photo credit: Bike RV Project Although this unit may operate as an economical, environmentally-friendly recreational vehicle for leisure cyclists, it could have a far greater impact on the “houseless” population, restoring a sense of order in their lives. With an estimated 100 million “houseless” people in the world and an additional 1.6 billion living in inadequate conditions, this project may establish a live/work environment, affording them the opportunity to take that next step (United Nations 2005).  As a communal society, together we can implement this powerful vision to assist those in need. Interview conducted by Brett Lezon