Washington D.C.’s 11th Street Bridge Project Jury recently selected four outstanding design teams to develop designs for the city’s first elevated park. With some of the top landscape architecture firms at the helm, these teams will develop a concept to creatively reclaim an unused bridge spanning the Anacostia River between the Capitol Hill and Anacostia neighborhoods.

The four teams, which are made up of landscape architects, architects and structural engineers, each received $25,000 to create full renderings and plans to be delivered by September. The teams are:

The District government and a local nonprofit organization, Building Bridges Across the River at Town Hall Education Arts Recreation Campus (THEARC), hope to transform the bridge into the city’s first elevated park, and reap the myriad benefits that have come to be known as “the High Line Effect.” 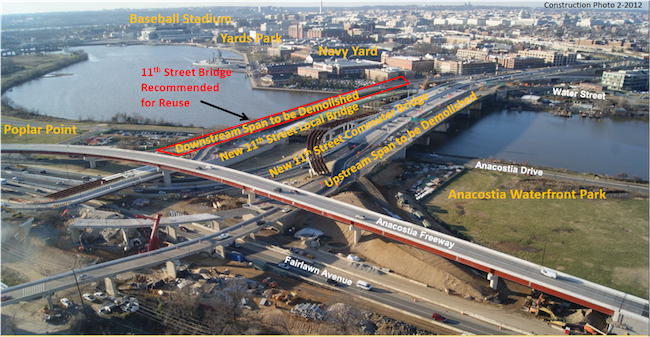 Previously, the unused span was due to be demolished as part of a District Department of Transportation (DDOT) plan until the 11th Street Bridge adaptive reuse project was proposed as an alternative. The new space aims to offer a park unlike any other in DC and will offer healthy recreation, environmental education and space for the public arts.

Although inspired by the High Line, the 11th Street Bridge Project differs significantly in size, scope and approach from NYC’s acclaimed 2009 park. Whereas the High Line is a reclaimed rail line that snakes through the posh and dense Chelsea district, DC’s proposed elevated park straddles a major river and would connect the economic and racial divide between the wealthier Navy Yard and the poor Anacostia neighborhoods.

Instead of working within a narrow linear footprint, the 11th Street Bridge will cover the equivalent of three football fields and include the area along the river underneath the new connector ramps. This will give the designers and the community the opportunity to include more active space for programs such as urban agriculture and performance. The width of the bridge could even accommodate a future streetcar.

A major physical challenge will be figuring out how to entice and bring residents from the Anacostia neighborhood over to the bridge. The connector ramps are currently located along the Anacostia side of the river and there is a quarter of a mile gap between the neighborhood and the waterfront.

Unlike The Friends of the High Line, the District government and the THEARC have taken a different approach in preparing for D.C.’s first elevated park. Whereas Friends of the High Line first selected a winner in a design competition before working on the design, THEARC sought input ahead of the design competition by holding nearly 200 meetings with constituents from neighborhood stakeholders and public agencies to non-profits that represented sectors such as recreation, health care, and social services.

These community meetings then developed goals that indicate big social and cultural agendas as well as economic and environmental objectives: 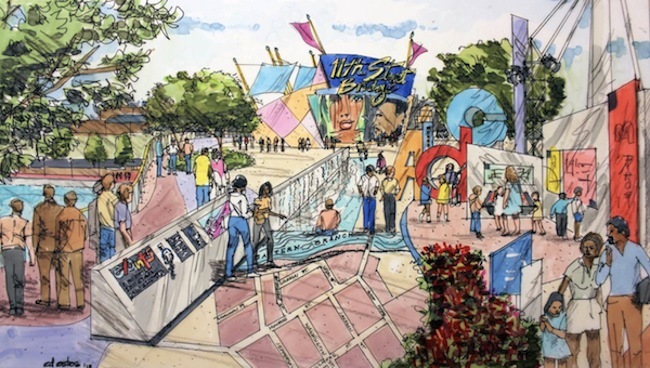 With a wish list that already includes neighborhood ‘wants’ such as outdoor performance space, environmental education classrooms and even river access with kayaks and paddleboats, the designers will be challenged to create a civic space for Washington DC that has both wide and long lasting appeal.