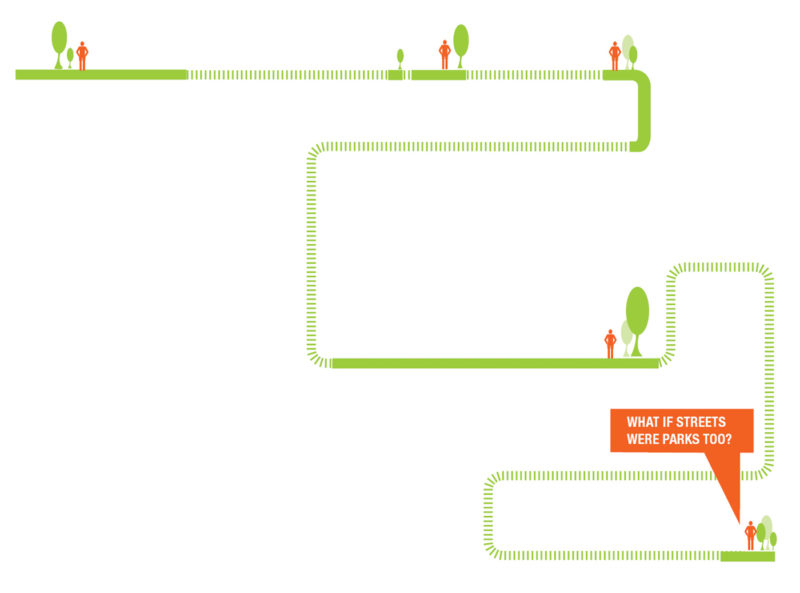 American cities are in the midst of a remarkable turnaround as urban living is growing more popular with young adults. This shift in preference is by no means limited to millennials, as empty nesters and even families with children are also opting for the vitality and convenience of urban environments. This is great news if we want to protect rural and wild places, reduce carbon emissions, and encourage healthier lifestyles. A challenge, however, is that it is difficult to retrofit our cities to provide sufficient open space for growing populations, especially in dense, built-out neighborhoods. With urban land values rising as remaining underutilized parcels are also eyed for development, acquiring new land for parks will only become more challenging.

One solution is to repurpose streets, which typically make up from 30% to over 40% of a city’s land area, compared with less than 10% for parks. As proximity and greater access to transportation choices reduces dependency on single occupancy vehicles, we can improve the performance of some streets as parkland, dramatically increasing the total amount of open space. By strategically choosing corridors with the greatest potential to link up existing parks and community destinations, we can achieve system-wide benefits, encouraging active living and increasing access to existing parks. And finally, because our densest neighborhoods typically have greater street grid richness and less park area per resident, we have a tremendous opportunity to improve quality of life and public health in our most underserved communities. The idea of streets as open space for people isn’t new of course. Streets have always been a vital part of the public realm, but as American land use and transportation patterns changed in the post-war years the prioritization of vehicular traffic diminished the role of streets as public space. With Americans now returning to the urban core in growing numbers to live, work and play, several trends have emerged that are repositioning streets’ role in our urban open space systems. 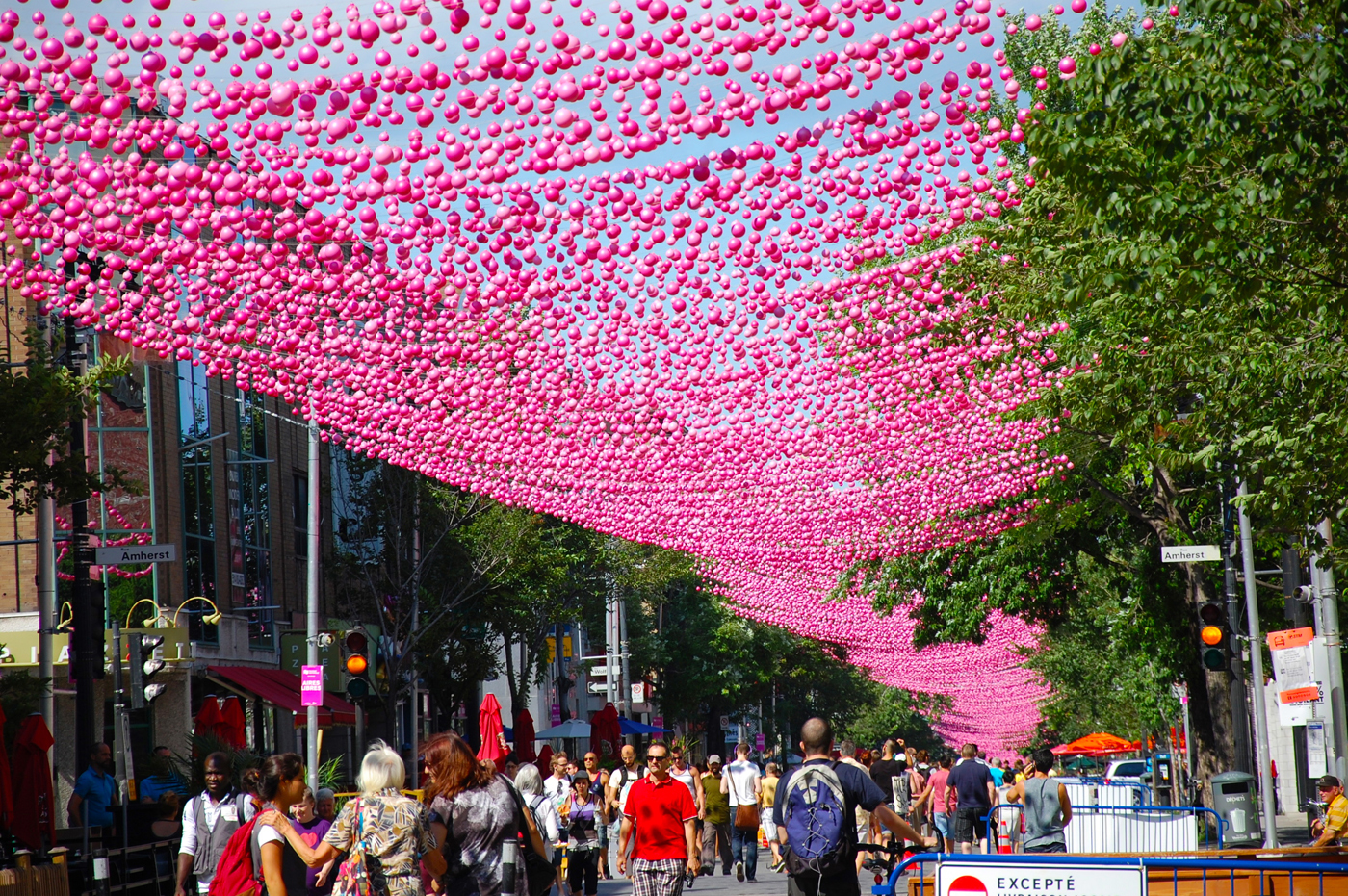 The first is tactical urbanism, which seeks to inspire long-term change to our existing public realm through quick, cheap grassroots actions. The last decade has seen a remarkable proliferation of projects such as parklets, streateries and pavement to plazas. These fast, flexible projects can be more experimental than expensive capital projects, demonstrating the social value of new open space typologies and informing the design of future improvements. Another dimension of tactical urbanism is the temporary occupation of space, from a parking space or an alley to full street closures. Building on the longstanding traditions of parades, festivals and block parties, cities are now regularly closing roadways and inviting all sorts of exciting programming and activation. From Seattle Summer Parkways to LA’s CicLAvia and Night on Broadway, existing streets are becoming a day and night venue for community delight. 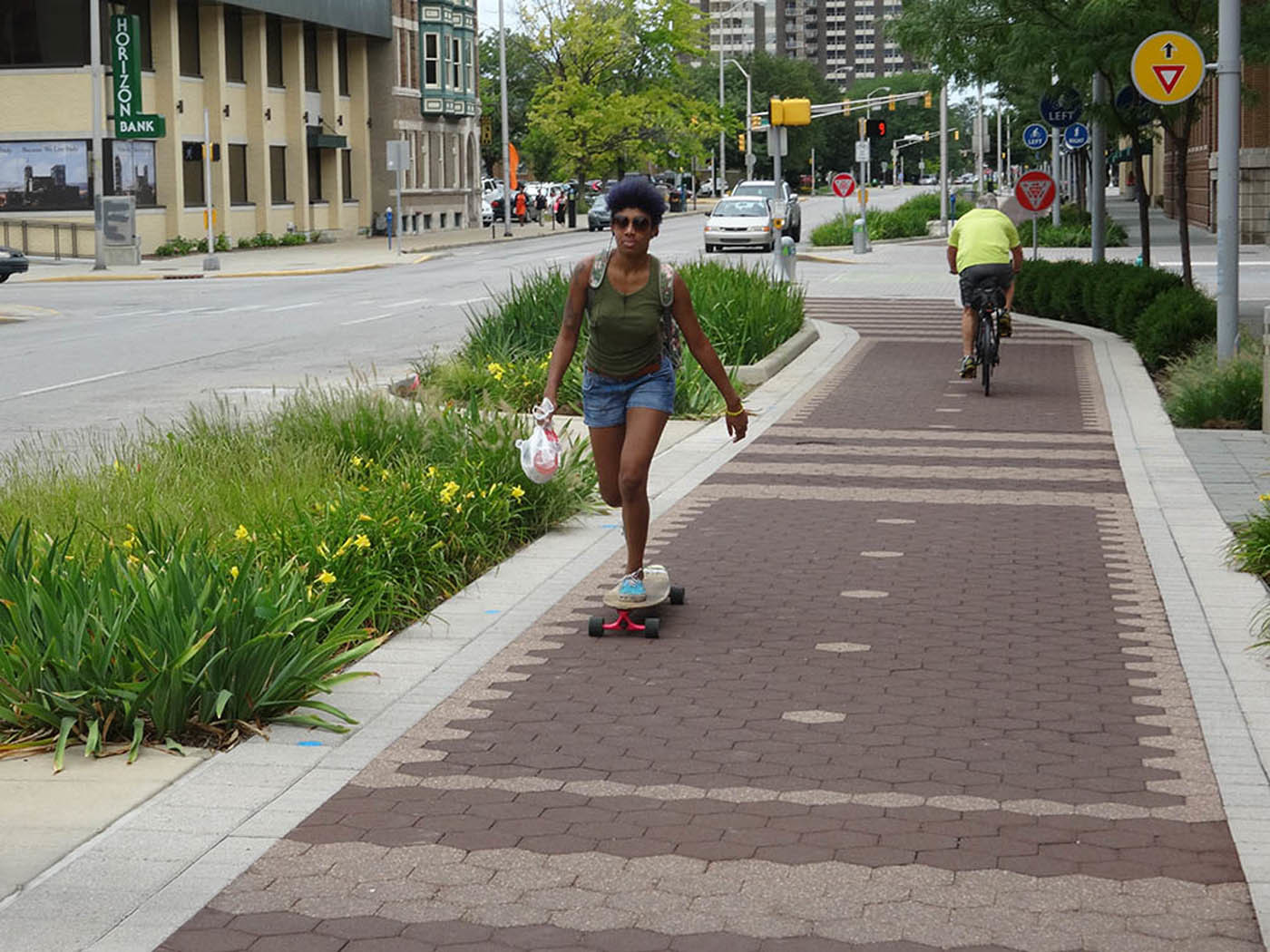 The second is the complete streets movement, which endeavors to rebuild our streets so that they balance vehicular use with the mobility needs of pedestrians, bicyclists and transit users. The National Complete Streets Coalition and NACTO have plenty of resources on the subject.  While most complete street projects have a fairly utilitarian profile with more space for pedestrians and bicyclists, some of the best examples, such as Houston’s Bagby Street and Winslow Way in Bainbridge Island, Washington, also incorporate green stormwater infrastructure and other elements which boost landscape performance. Projects implemented on a grand scale and with refined urban design treatments, such as the Indianapolis Cultural Trail and the redesign of the Nicollet Mall in Minneapolis, can even transform the image of a city and catalyze redevelopment of adjacent sites. 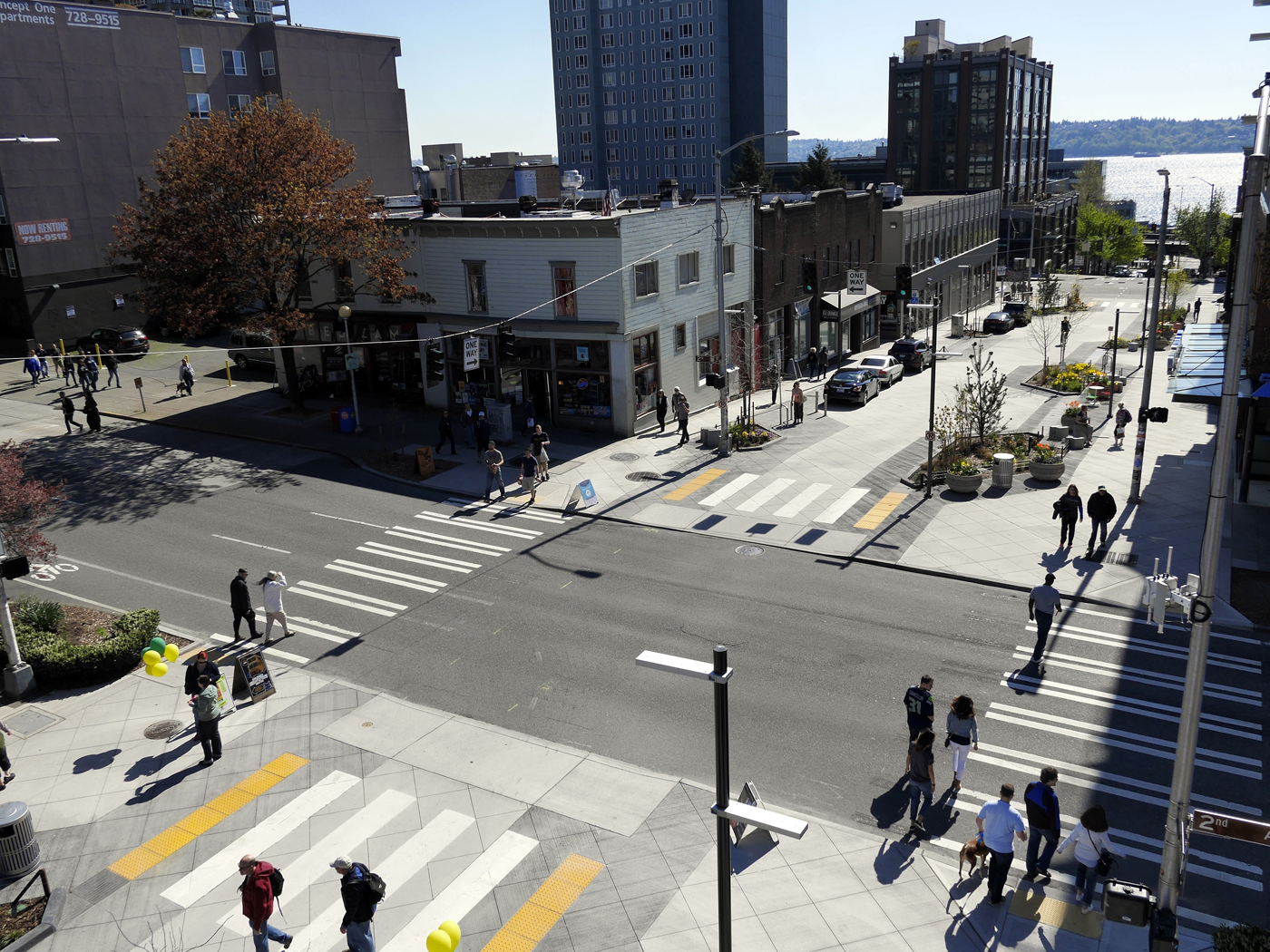 A final trend, in some ways a synthesis of lessons learned from the previous two, is shared space, which increases safety and activation by blurring boundaries between modes and uses. Most famously championed by the Dutch traffic engineer, Hans Monderman, shared space is typically curbless from one building face to the other and relies on the attentiveness of all users rather than conventional barriers and signage to achieve a safe and inviting environment. Smaller applications of these principles, usually in residential settings, have been called woonerfs or home zones. The New Road in Brighton, England and Bell Street Park in Seattle are examples of applying these principles to more heavily used downtown streets. 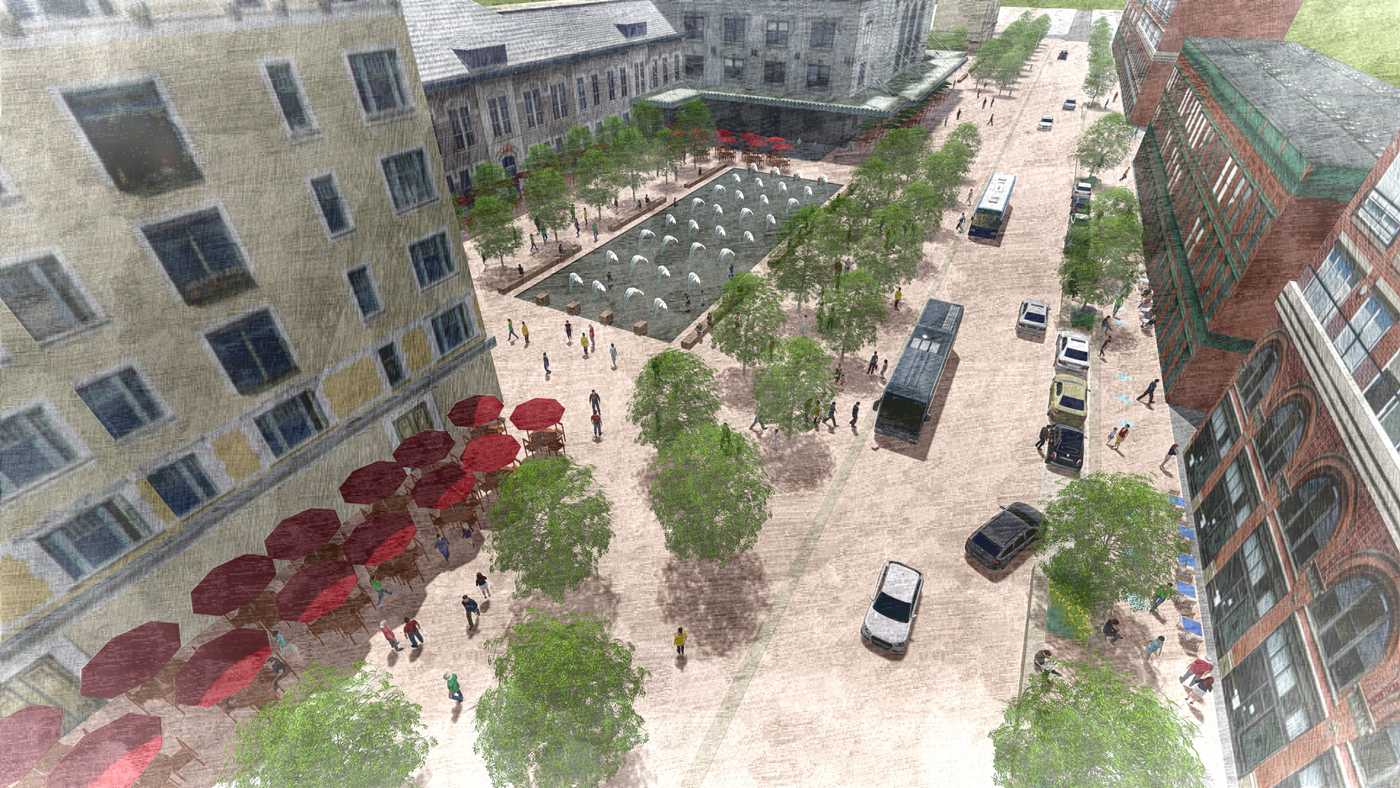 A look to the future: Denver’s Mile High Loop design by AECOM

As we look to the future of urban streets as open space, these trends are converging in projects, such as Denver’s Mile High Loop, that knit short-term tactical and long-term capital improvements into a rich tapestry of multi-modal connections and vibrant in-street destinations and events. Looking even further, autonomous driving vehicles will require much less space for moving and parking. Creative planners, designers and community leaders will be able to repurpose the surplus right-of-way as a high performance open space network in the service of more dense and livable cities. Recent innovations in tactical urbanism, complete streets and shared space offer a glimpse of what is possible.

Nate Cormier
Nate Cormier is the Managing Studio Director at RIOS. Nate’s interest in landscape design as a form of storytelling drew him to Los Angeles seven years ago after two decades of practice in Seattle and a Masters in Landscape Architecture from Harvard. Today, Nate helps lead a team of over 60 landscape architects working across diverse typologies and regions. He is passionate about civic and cultural spaces as well as restorative environments for health and hospitality. Current work includes major commissions in Tulsa, Denver, Phoenix, and Miami. Nate’s north star is an immersive beauty founded on formal curiosity, local materials, and co-creation.