Landscape architects frequently work to transform areas that contain industrial and toxic waste, infrastructure no longer in use, or land affected by war, natural disaster or disuse. These neglected places, while often having a negative impact on the environment and surrounding community, are simultaneously part of our cultural heritage. To highlight the significance of these spaces, and the potential that they hold to become something more than a blight, I showcase a range of projects that illuminate how designers use unlikely opportunities to transform landscapes into spectacular spaces—all while preserving their historic and cultural meaning. These 10 case studies showcase the creative approaches city governments, preservationists, developers and designers have taken to transform marginalized places into healthy and meaningful environments for everyone to enjoy.

In 1965, the design for Gas Works Park transformed a former coal gasification plant into an enormously popular public park. A central feature, the boiler house, was converted into a picnic shelter complete with tables and fire grills, while a former exhauster-compressor building was turned into an open-air play barn that houses a maze of brightly painted machinery for children. This groundbreaking project has been celebrated for its ability to garner local support and shift public perceptions of post-industrial landscapes. It is considered revolutionary for its reclamation of polluted soils using the natural processes of bioremediation, while uniting aesthetics with sound ecology. 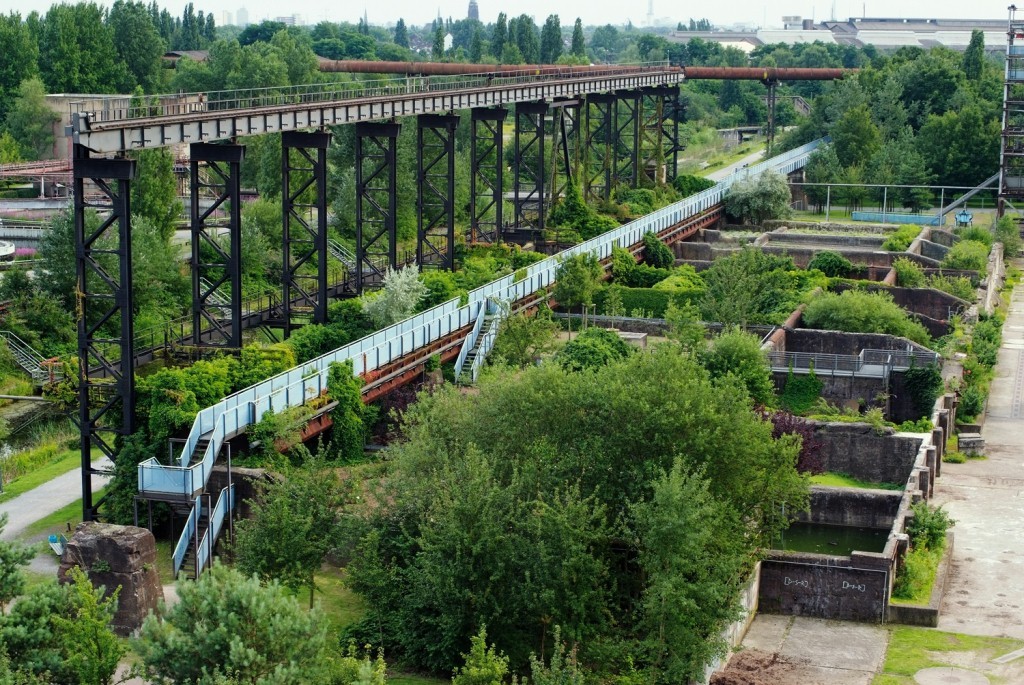 Working on a 570-acre site of a former steel plant, Latz + Partners’s approached their reuse and reclamation project with optimism. Rather than looking at the site’s disturbed and complex conditions as nuisances that should be erased or camouflaged, they worked carefully to mine them for their creative potential. The transformed site creatively repurposes existing structures, and throws in a number of amenities that promote recreation and community, including a deep diving pool, a rock climbing wall, picnicking areas, hiking trails, and multiple performance spaces—all woven together to create tapestry of memorable places. The aim was to change the industrial landscape with minimal intervention, recycling and visually renewing decaying architectural objects into poetic places that pay homage to the site’s past. 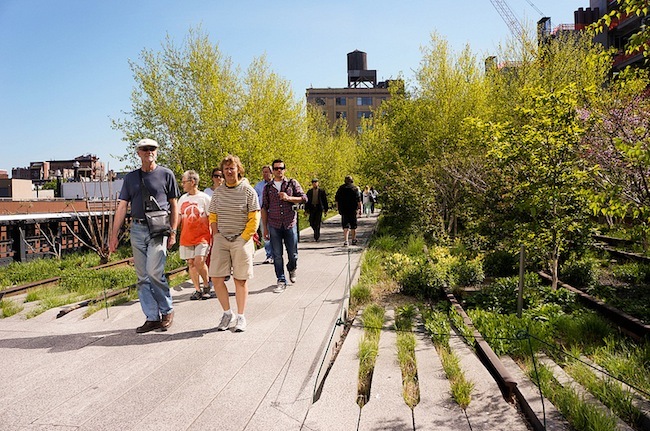 The High Line is a one mile stretch of abandoned elevated railroad on New York’s West Side, which was under threat of demolition. After years of public advocacy, it has been resurrected as a park that’s become one of the city’s most popular destinations. The park’s attractions include naturalized plantings that are inspired by the self-seeded landscape that grew on the disused tracks, unexpected views of the city and the Hudson River, and cultural attractions that are thoughtfully integrated into the architecture and plant life. The project cost substantially less than it would have been to wholly demolish and redevelop the area. Preservation and innovation come together through the adaptive reuse of the existing structure as a new, compelling, one-of-a kind recreational amenity and public promenade.

Michael Van Valkenburgh Associates worked with Wellesley College to revitalize the toxic brownfield of Alumnae Valley, an area that previously hosted the college’s power plant, industrialized natural gas pumping stations, and a 175-space parking lot. Managing the corrupted soil involved several strategies: removing the most toxic soil, capping and collecting the mildly contaminated soil, and then finding a way to reuse it as part of the landscape. The site was originally shaped by Ice Age glaciers. The mounds along the paths mimic the original sculpting of the land while storing remediated soil. The integration of topography, hydrology, and campus life brings Alumnae Valley back into harmony with its surroundings. 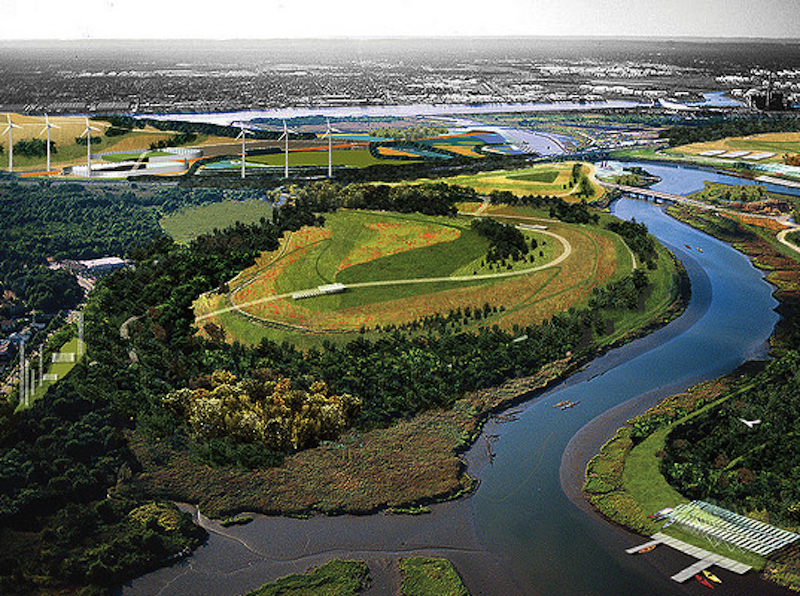 Fresh Kills Landfill has become a model for landfill reclamation around the world, having been transformed into a vast green space full of wildlife. The site is large enough to support many sports and programs that are unusual in the city, including activities and features such as horseback riding, mountain biking, nature trails, kayaking, and large-scale public art. Demonstrating the role of wetland buffers in battling rising waters, Fresh Kills absorbed a critical part of the storm surge during Hurricane Sandy. With the help of advanced landfill gas collection infrastructure throughout the area, methane is actively harvested from the decomposing waste, providing enough gas to heat 22,000 homes. The transformation of what was formerly the world’s largest landfill into a productive and beautiful cultural destination demonstrates how landscape architecture can restore balance to the land. 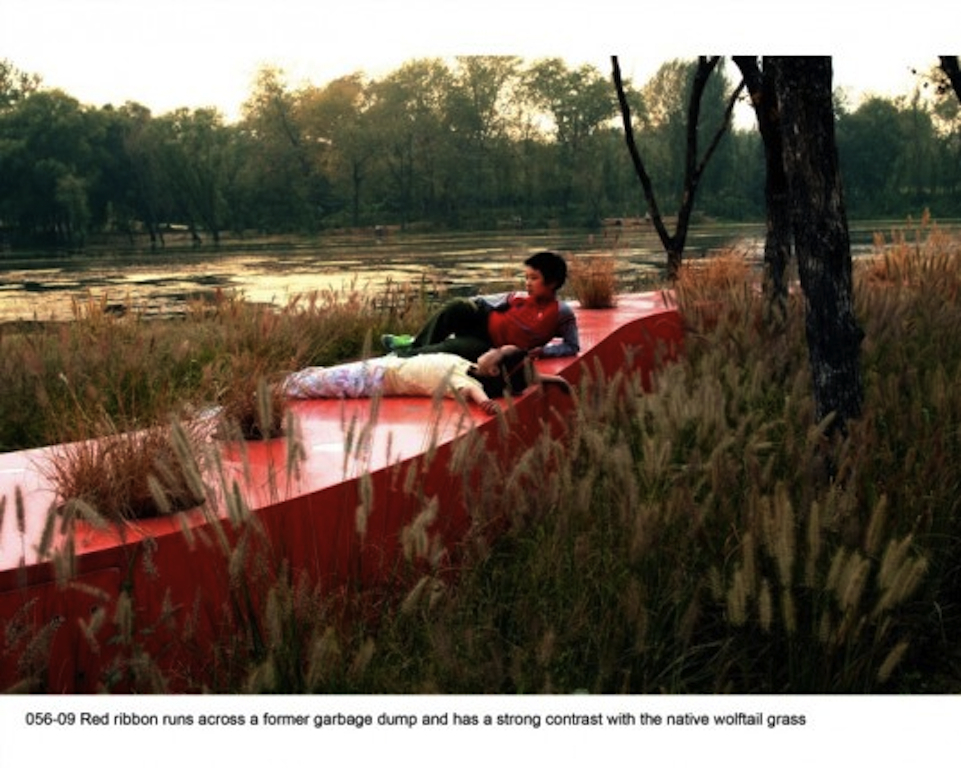 Much of the original site, located at the edge of a largely inaccessible beach, was used as a garbage dump and included deserted slums and irrigation facilities. The goal of the Tanghe River Park project was to preserve as much of the natural river corridor as possible, promoting the lush, diverse, natural vegetation. Instead of paving over the riverfront with hard pavement and planting ornamental flower beds, the design employs a “red ribbon” steel structure stretching 500 meters along the riverbank. This feature provides access for jogging, fishing, and swimming, with minimal impact on the landscape. The red ribbon snakes along a boardwalk that provides walking access throughout the park. Many of the park visitors are former farmers and “newly urbanized.” The park gives visitors an environmental connection with rural China. 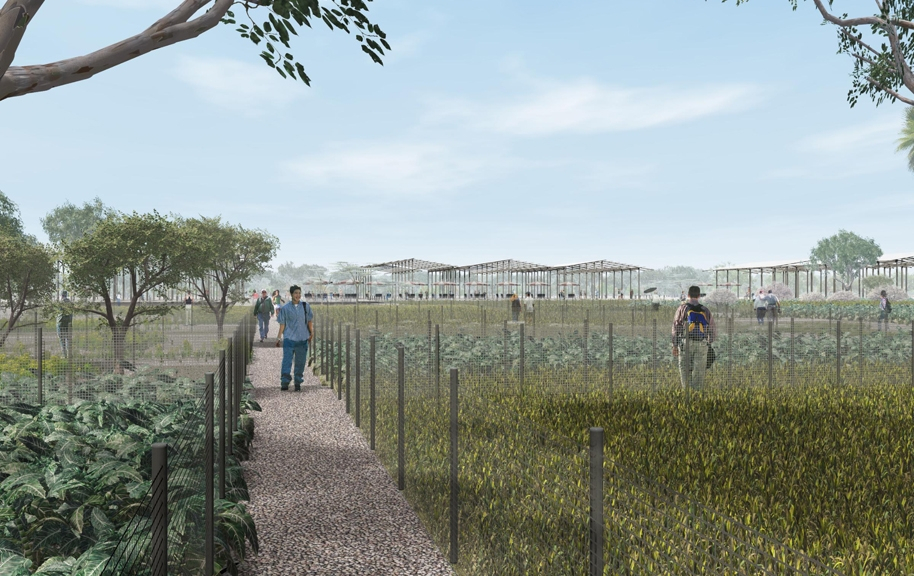 Viet Village Urban Farm is an urban farming project located in New Orleans East, an area hard hit by Hurricane Katrina. Before the devastation of the hurricane, there were over 30 acres of community-farmed land growing traditional Vietnamese fruits and vegetables. Mossop + Michaels‘ new design for a 28-acre farm will sit in the middle of a dense urban environment, continuing the tradition of urban farming that Vietnamese immigrants started there in the 1970s.The design will employ sustainable irrigation techniques that require little or no electricity to pump and filter water used in the fields. And the organic crops produced on site will be sold at a new on-site farmer’s market estimated to accommodate the 3,000 Saturday shoppers who had previously bought foods these community farms before Katrina hit. 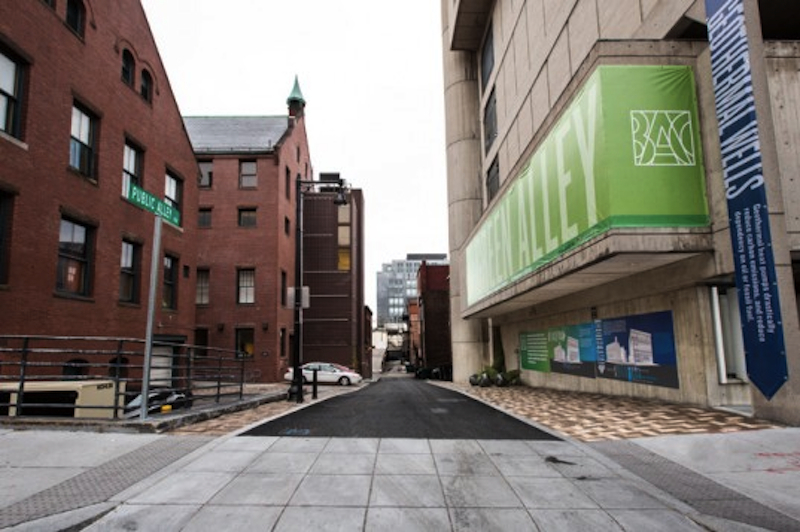 Boston’s Back Bay neighborhood, built on landfill in the 1880s, features rows of elegant brownstones along tree-lined streets with public alleys running behind the buildings providing service areas for deliveries, trash storage, and parking. The Green Alley, located on the Boston Architectural Campus (BAC) in Public Alley 444, lies between the college’s 951 Boylston Street building and 320 Newbury Street building. It has been redesigned to recharge the groundwater by filtering stormwater from alley surfaces and two BAC rooftops through permeable asphalt and paver systems and substrate. Below ground, geothermal wells serve the college’s core buildings and lead BAC towards their net-zero campus energy goal. A vertical steel grid rises up two sides of the Boylston building for greenery to help reduce the heat effect in this narrow urban canyon. As a design school promoting practice-based design, BAC’s commitment to sustainable approaches in urban design and collaborative processes is fully demonstrated through this replicable approach to the Boston Back Bay alleys. 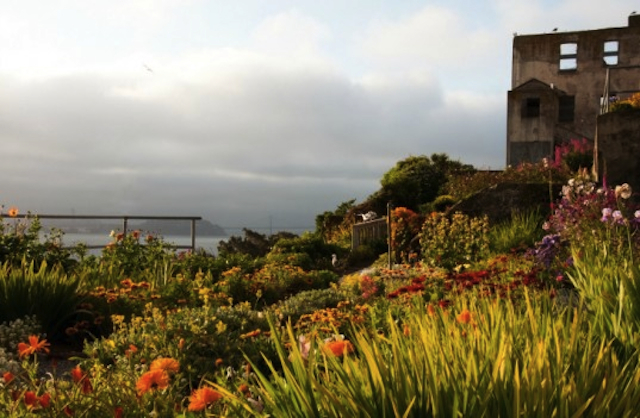 The Gardens of Alcatraz in San Francisco Bay

During the military and federal prison periods, staff and prisoners transformed much of the Alcatraz Island’s landscape into intensively maintained gardens. The gardens served as refuges from the harsh surroundings, becoming an important part of everyday life for officers, families, and prisoners confined to the island. With the closure of the federal prison in 1963, the gardens were abandoned. After extensive planning, removal of overgrowth, planting, and repair of deteriorated structures, the gardens are blooming once again for the thousands that visit the island daily.

Scheduled to open in 2014 on the 100th anniversary of the outbreak of World War I, Herinneringspar park is a joint venture between the Flemish state government and the Belgian federal government. The war and its aftermath have had significant physical and ecological impacts on the Westhoek landscape—from the flatlands to the deforested and bombarded fields to the agricultural farmlands. This project will create a regional remembrance park along the front lines of the war, memorializing key battlefields through a series of ephemeral plantings and atmospheric effects within the agricultural fields. The design pays tribute to the area’s military past, while also acknowledging the agricultural present and suggesting a resonant future.

Since earning a BA in architecture, Pamela Hartford has put her design education to use in both editorial and landscape design projects. Moving to Salem, Massachusetts and working in a historic district piqued her interest in landscape history and preservation, inspiring her to pursue a certificate in Landscape Design History from the Landscape Institute. She is researching the work of landscape architect Warren Manning, a disciple of Frederick Law Olmsted, for the Library of American Landscape History, and unearthing the horticultural history of Salem in the archives of the Peabody Essex Museum. She is interested in how cultivated (productive) landscapes have shaped our aesthetic and emotional response to landscape.