Have you ever been in a garden built along 1100 years? Many gardening styles can be appreciated in the Alcazar of Sevilla, it is like a history book.

It is known Muslim heritage in architecture and gardening in Spanish cities like Cordoba and Granada, but there are other places where we can appreciate the detail, elegance and splendor of this artistic style. When we travel to sunny Sevilla we can not miss the Real Alcazar, it is dated back to the tenth century and declared World Heritage Site, with over a thousand years of history, it is the older Royal palace in active in all Europe. All architectural and gardening styles from the Muslim era in the Iberian Peninsula to the twentieth century are reflected in one way or another in the evolution of the building. 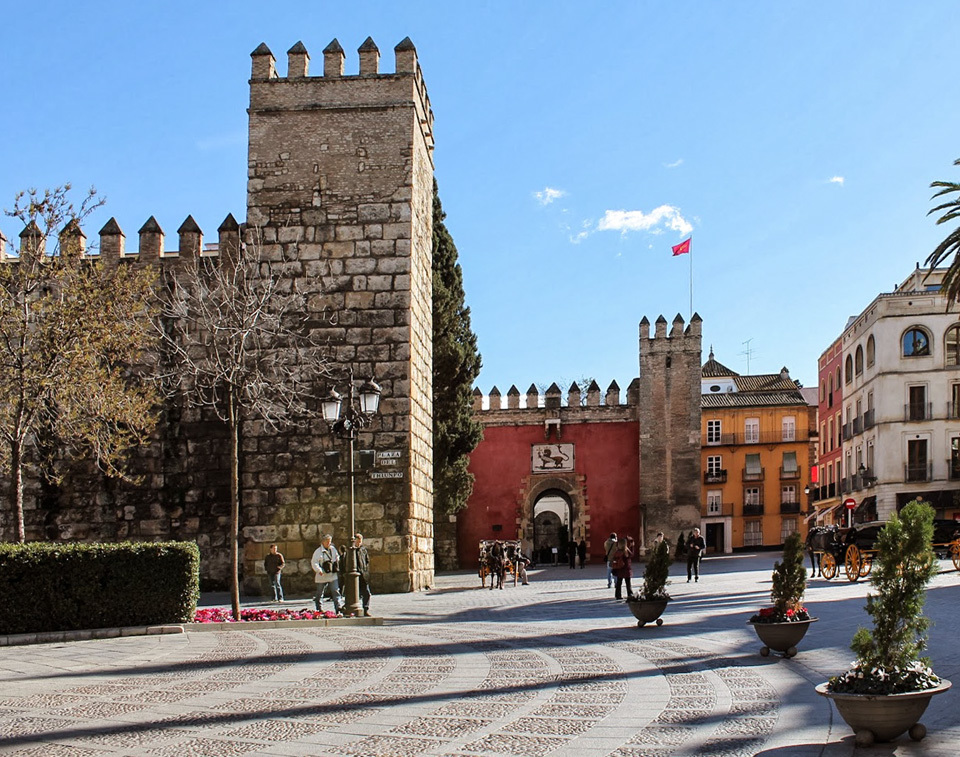 Door of the Lion

The Real Alcazar of Sevilla is a great monument of immense beauty. Its palaces and gardens manifest the wisdom, character and sensitivity of this city. The gardens of the Alcazar are a compendium of the history of gardening, all of them are structured by an Arab structure set on the primitive Andalusian gardens of the original “alqsar”, an Arabic word meaning “the royal house or room of the prince”. In mid-fourteenth century the king of Castilla Pedro I “the Cruel” ordered the remodeling of the building and grounds making use of Arab artists, reaching the Moorish appearance, it is now preserved and amazed by its richness and ornamentation. 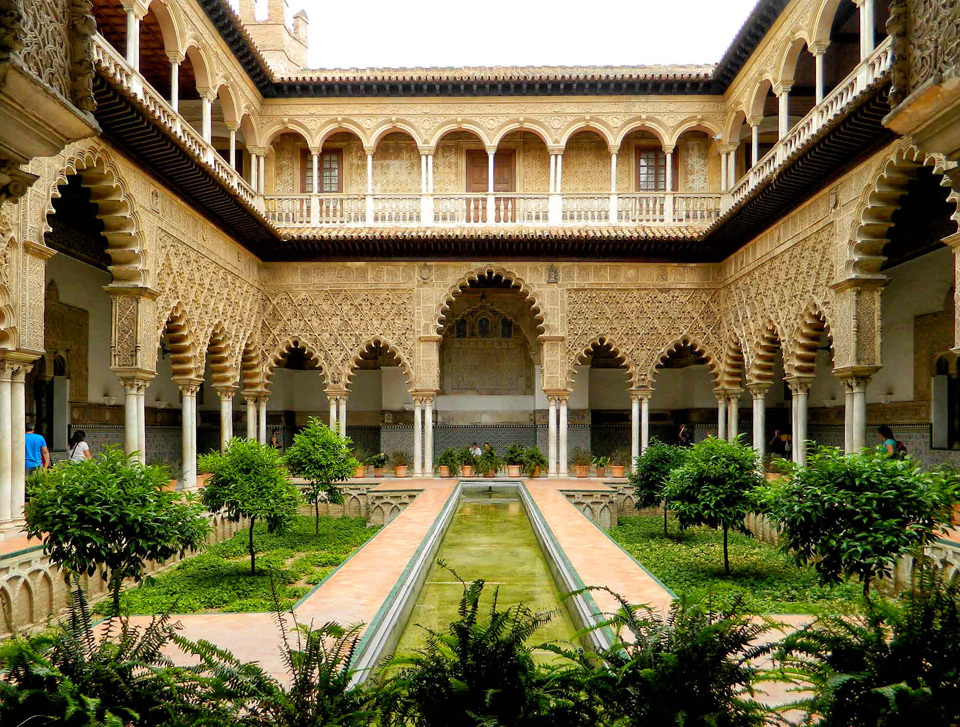 Patio of the Ladies

The appearance of the grounds is different from the Alhambra of Granada, here they are bright and spacious gardens with a geometric pattern of closed areas, respecting the privacy of the human scale, successive spaces communicate with each other through gates and fences, urging us to cross them. With the passage of time the old orchards were transformed into exquisite gardens gratifying the senses, always accompanied by water, it is a symbol of purity which gives exuberance and radiance to the vegetation. Water always accompanies our ride with its sound, running through ditches and canals, appearing relaxed in the many pools or trembling in delicate sprays, it appears more sound in Renaissance fountains and grottos later time. 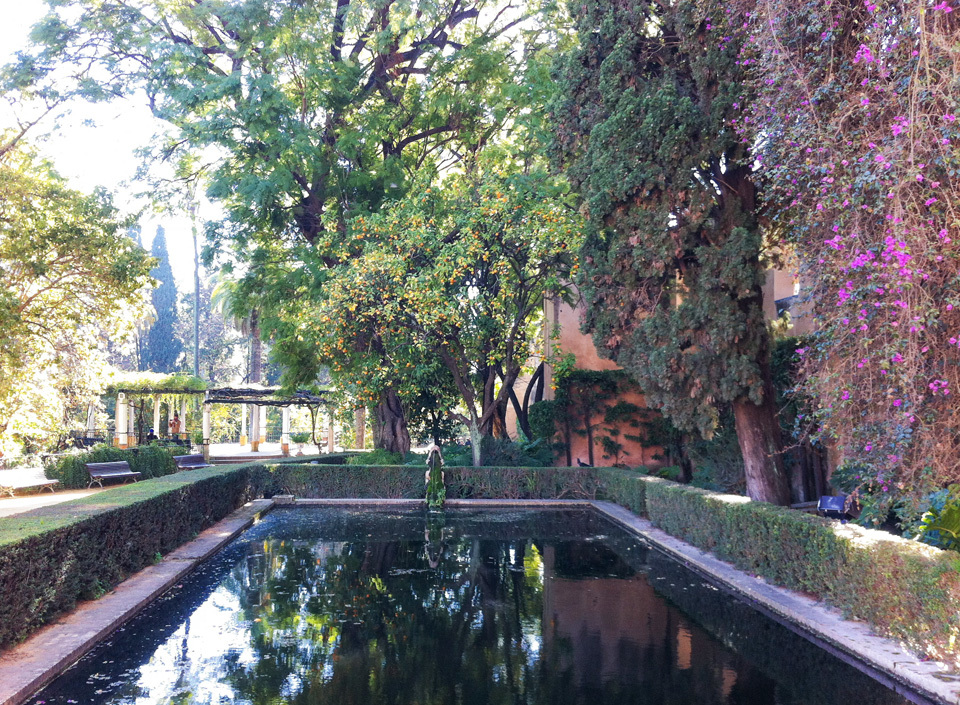 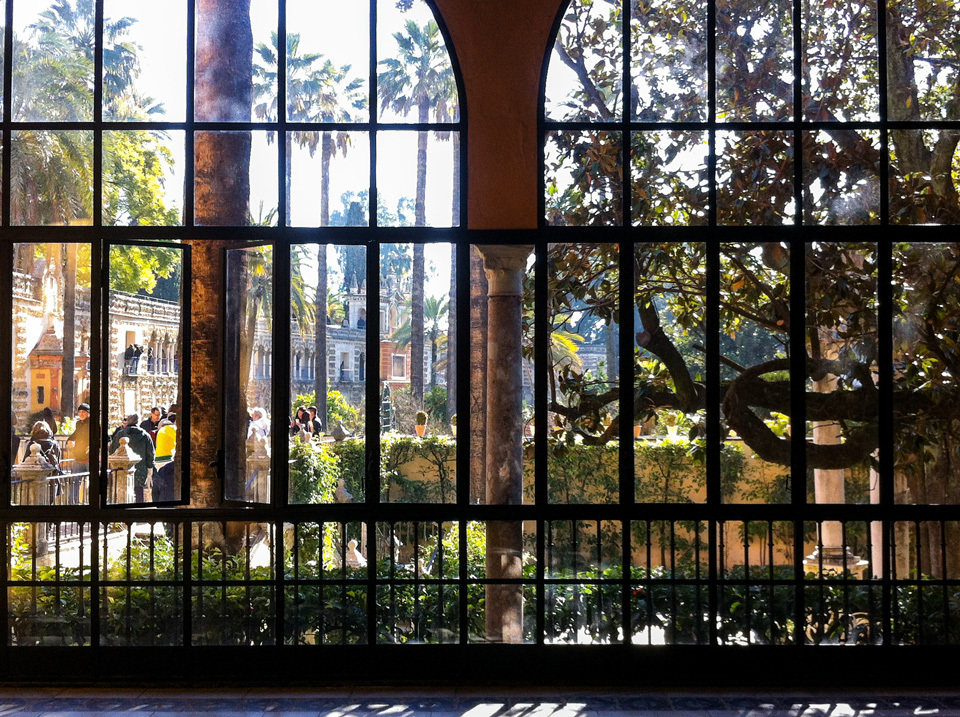 The gently sloping terrain creates staggered spaces from which we can observe the extent of the gardens, the visitor is surprised by effects and views on other spaces. The gardens descend to the river Guadalquivir on three terraces. The first terrace is composed of three small courtyards where we can appreciate the more refined Mediterranean garden with all elements of Arabic landscaping, water, walls, pavements and drawings of clay tiles that cover pools and fountains. The vegetation here is typical Mediterranean vegetation, cypress, magnolia, lemon, orange, boxwood and myrtle. 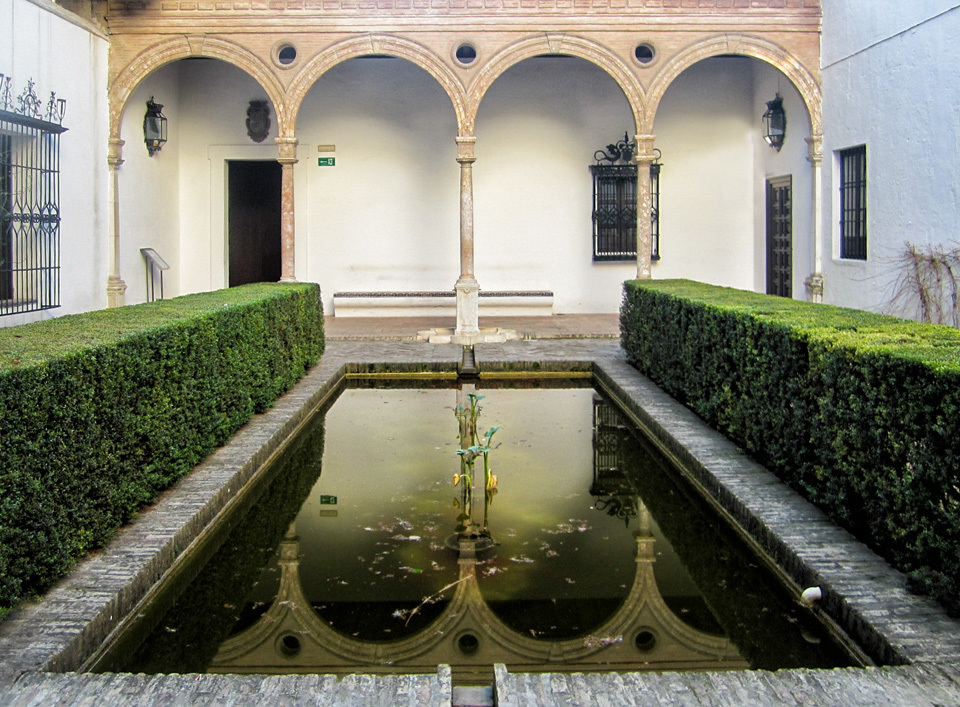 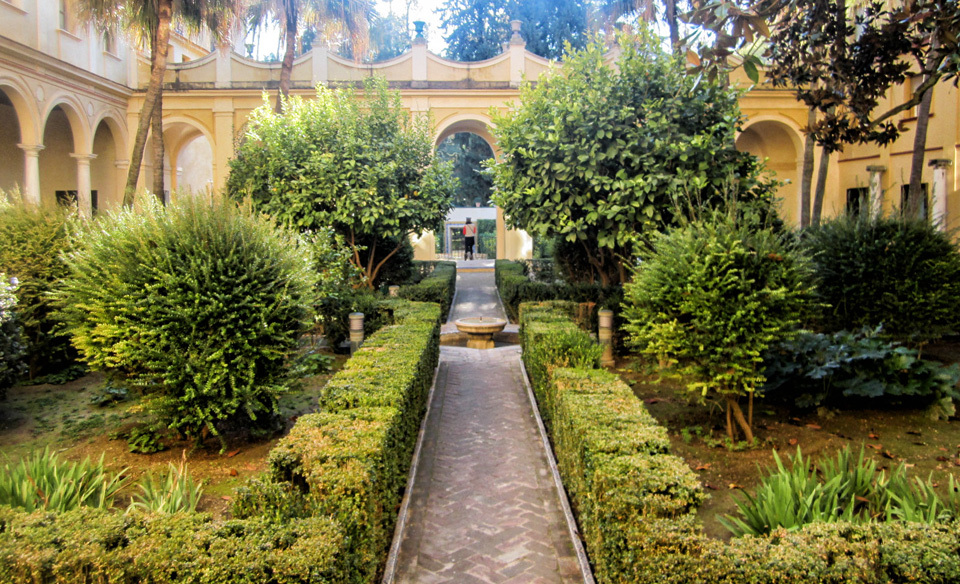 The second terrace attached to the palace, is a grid divided by hedges of boxwood, with sources sited at crossings. It is the busiest, where tourists gather outside the building before entering the grounds. In the third terrace spaces are broader with traces of later times, King Carlos V left his mark here building a delicate pavilion fully integrated into the landscape of the environment. 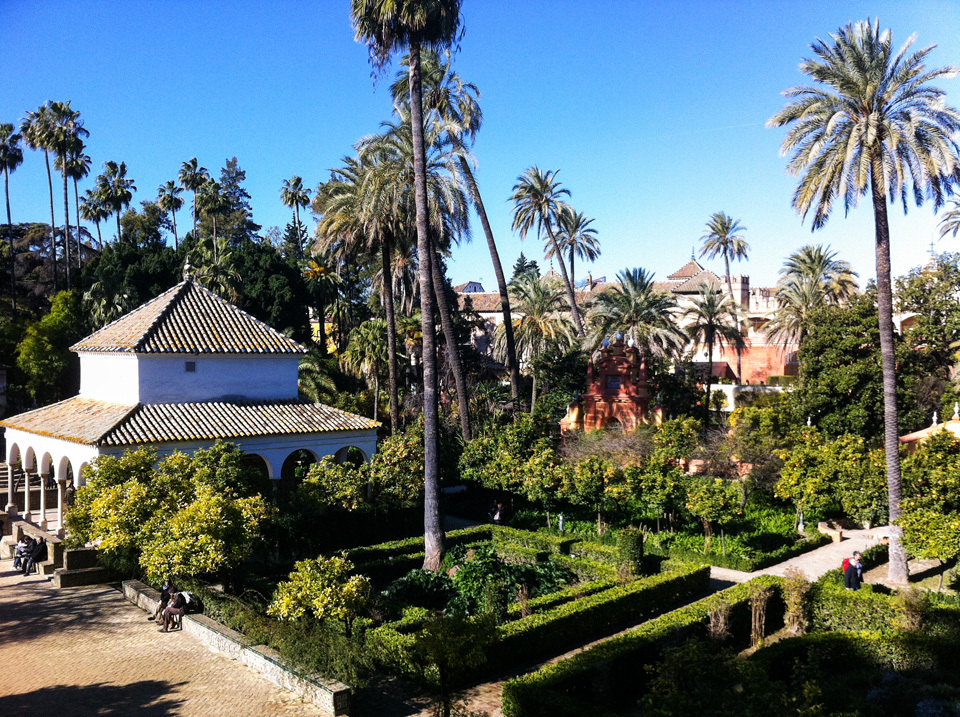 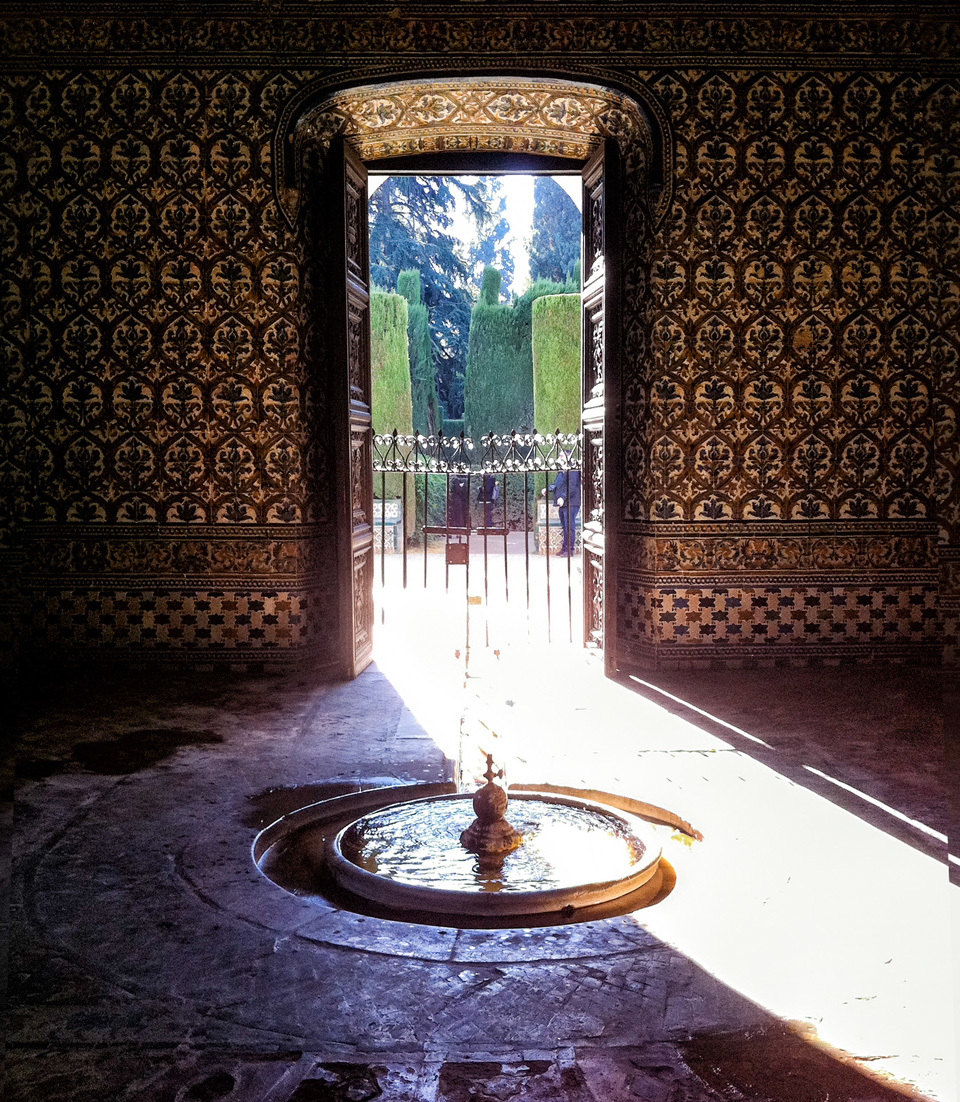 Other gardens were built with an Italian Mannerist style in the early seventeenth century. From this period are the Mercury Pond, originally irrigation pool, the Garden of the Ladies and the Gallery of the Grotesque that transformed the Muslim wall creating a large elevated walkway, from which visitors contemplate the whole of the monument and even the Cathedral. Also the English landscape style has its place with plenty of trees, the Garden of English, and more recently, as the French style in the Garden of Poets. 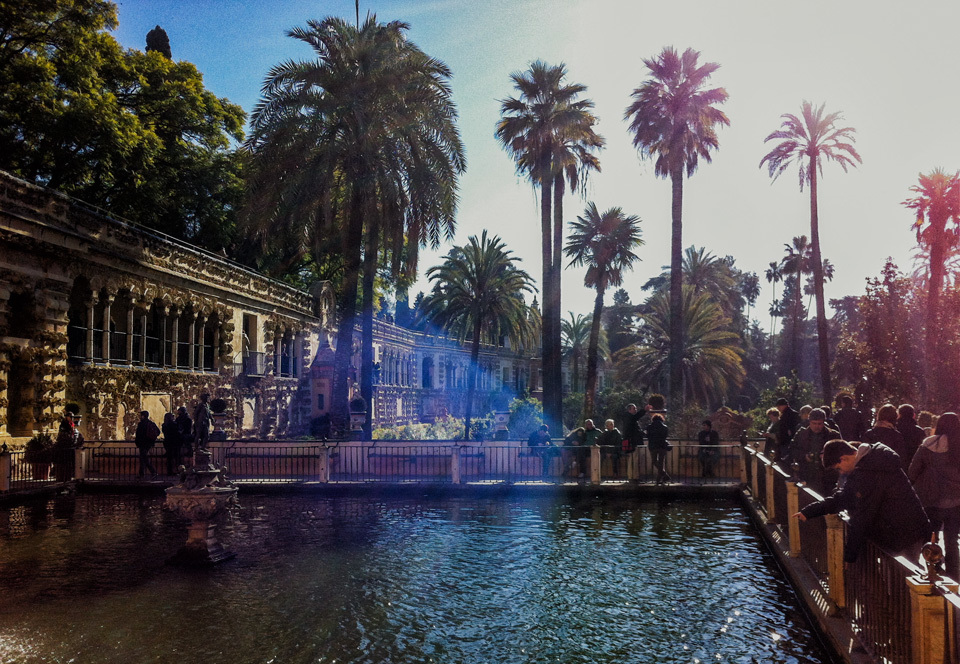 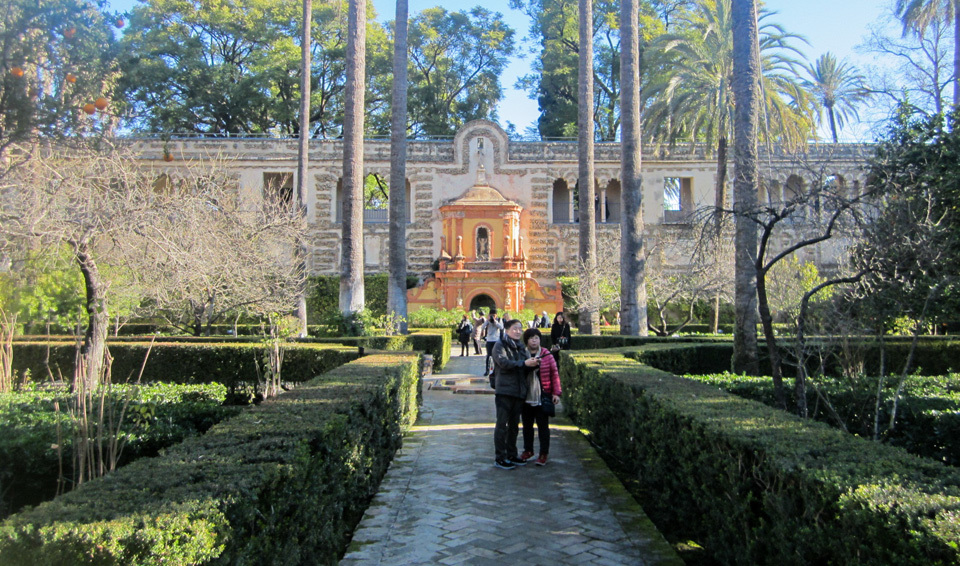 Fountain of the Fame 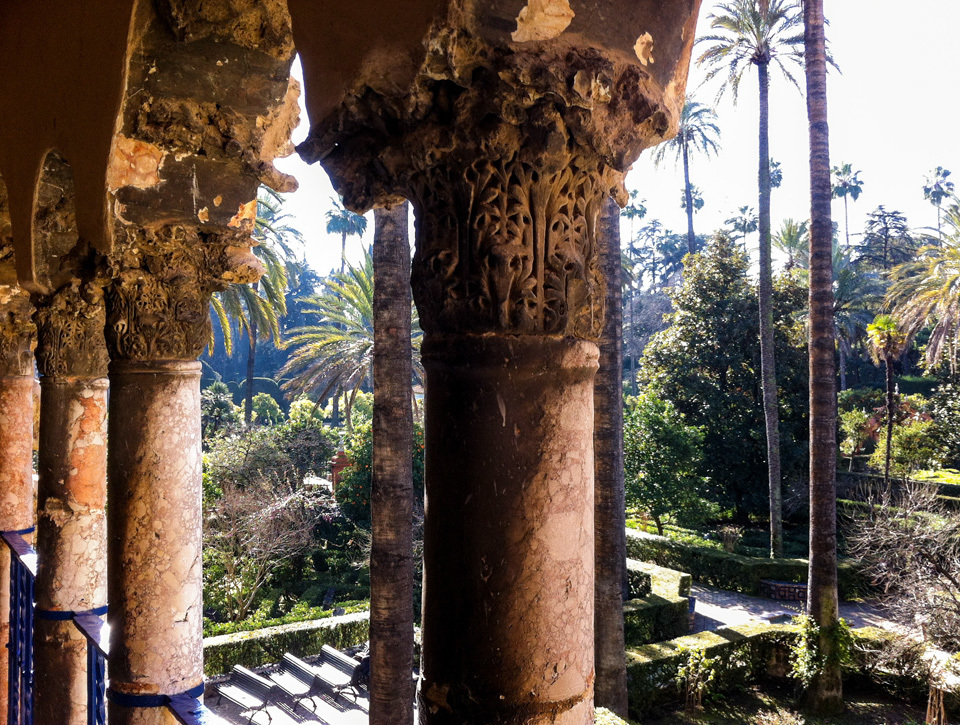 View from the Gallery of the Grotesque 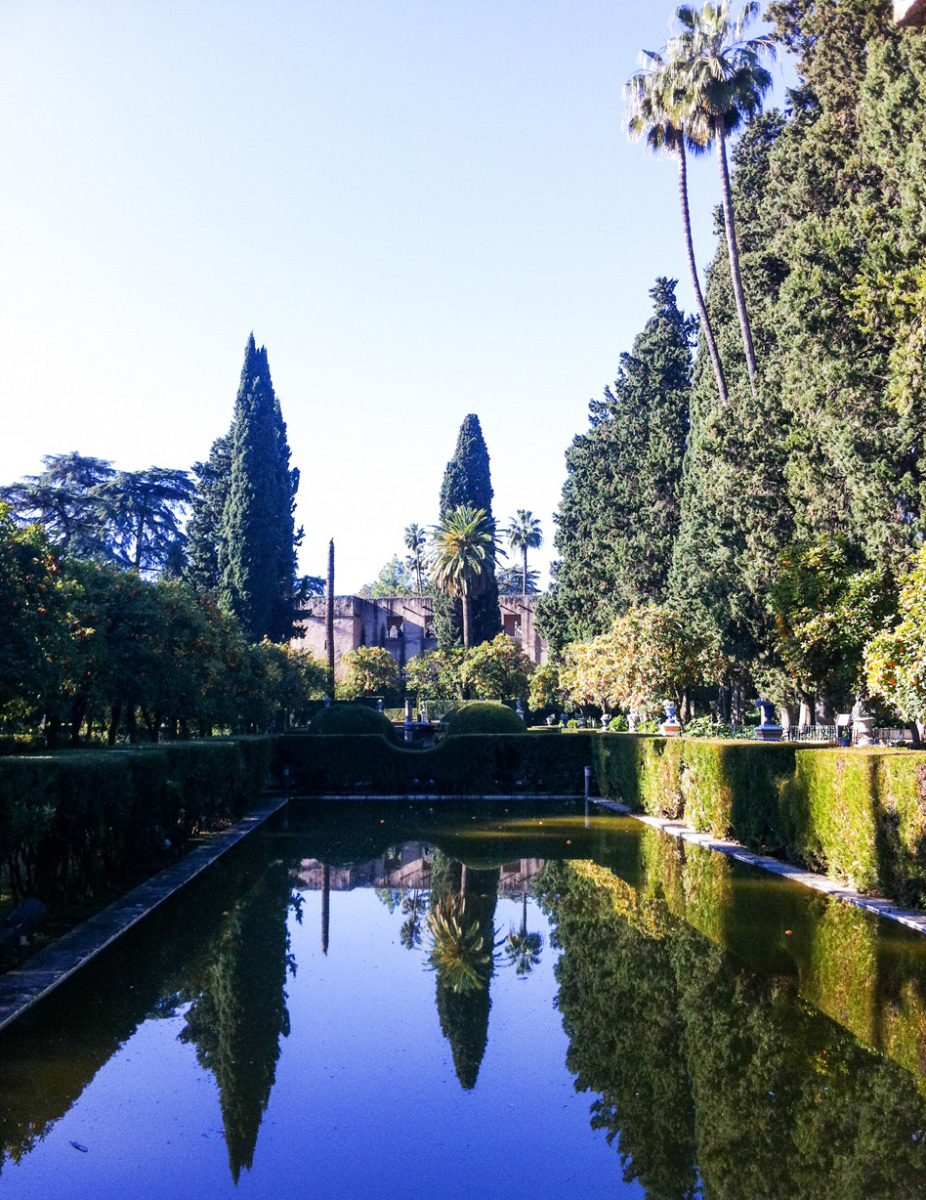 Garden of the Poets There are other examples of Hispano-Arabian gardening in the city, including the magnificent Patio de los Naranjos in the Cathedral, but it is in small inserts courtyards inside the Sevillian houses where we perceive the spirit and topicality of the Mediterranean gardening style. 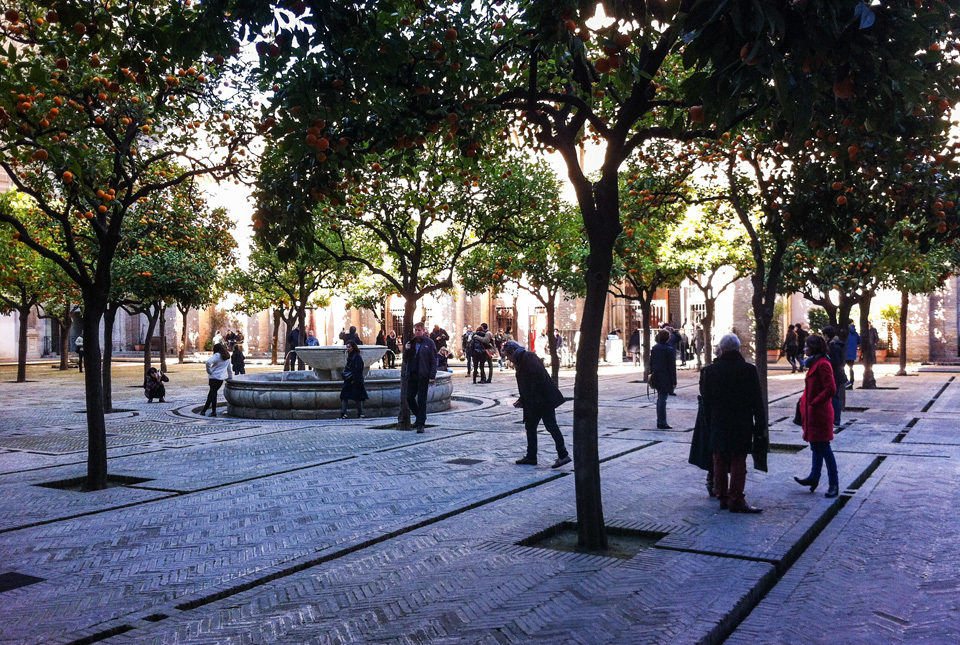