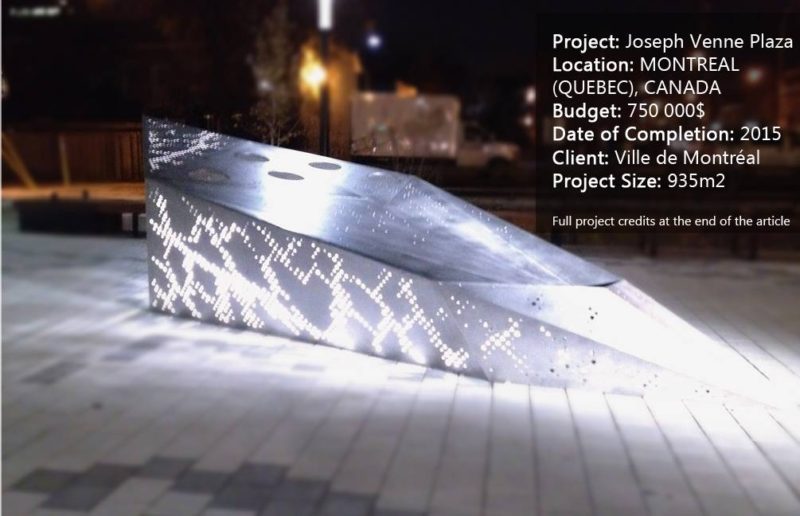 Article by Farah Afza Jurekh – Joseph Venne Public Plaza by NIPPAYSAGE, Ontario Street, Montreal (Quebec), Canada. Design is a powerful tool. It has the ability to transform and do magic. Landscape architects amaze us by bringing out a whole new outlook, the potential of a place from merely nothing, especially in revitalization projects. Joseph Venne Public Plaza, located in Montreal (Quebec), Canada, is one such intriguing project which has turned an old parking lot – a boring space – into the heart of the neighborhood. The space which was once being ignored by the residents is now the center of attraction, the meeting place of the St. Marie’s neighborhood. 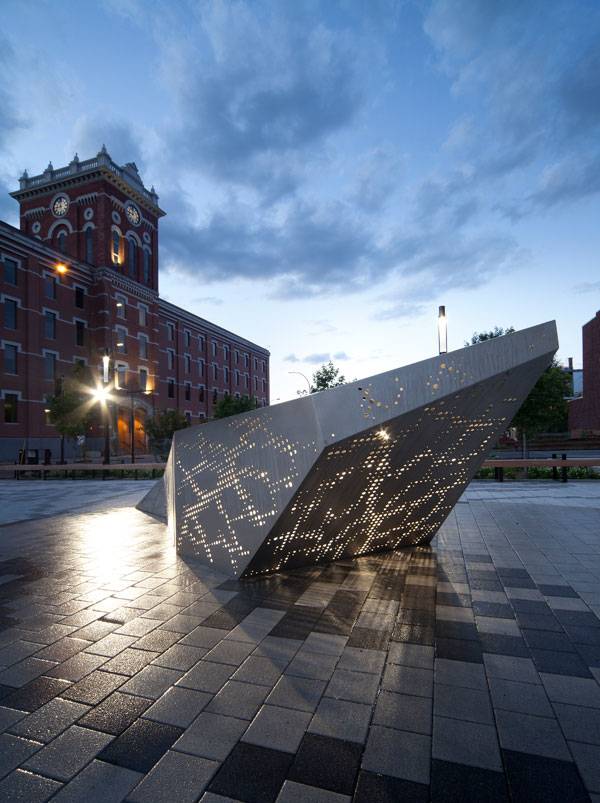 Revitalization of the Neighborhood

Joseph Venne Public Plaza, designed by NIPPAYSAGE, is a part of the major revitalization projects in the urban realm. Being a part of the urban project, the design team not only concentrated on a new public plaza, but also sought to make it a focal point of Ontario Street to revamp the neighborhood.

The approach of the design team fits the spatial requirements, satisfies the needs, and reflects the desires of its people. For any site, historical background and site context are the determining factors. Across the street is the JTI-Macdonald Corp building, one of the well-known tobacco factories.

Before shot via Google Street Images

Hence, an unbuilt perimeter was kept for the safety of the workers in case of any explosion. The old building in the proposed place is the CSDM; a French boarding school which was once used as the primary school for the tobacco factory workers. Considering the historical context, the designers establish a plaza with strong visual connection between the two entities along the adjacent street. This permeability has made it an inviting plaza for the students, workers and residents. 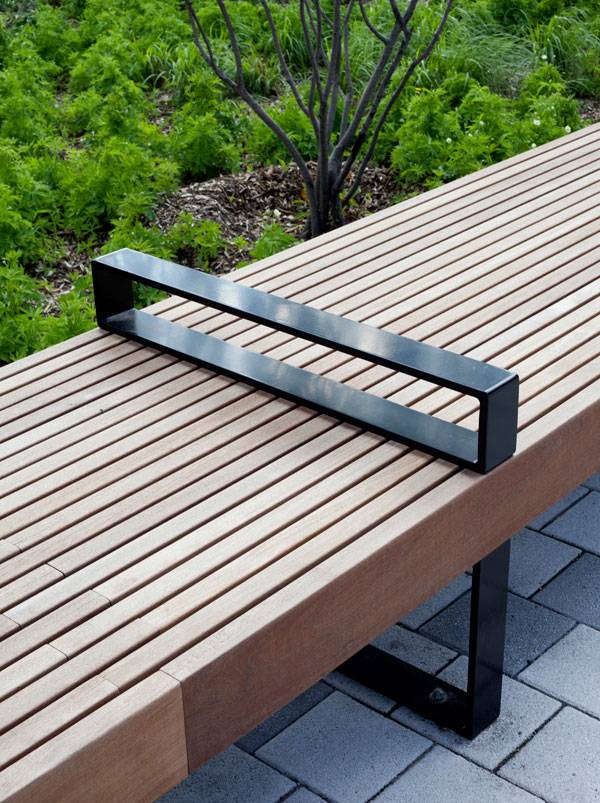 A new pattern of paving is designed to woo the people. The new and intriguing pattern gives the public plaza a new outlook to stand out from other plazas. The pixelated versions of large leaves, when viewed from above, seem like the computer-generated image carved in the pavement. The underlying concept behind the giant leaves derives from the cellular patterns of the leaves. Various customized modules of concrete blocks are used to create this pattern. The tonal variation in the grey hue gives a distinct look to the leaves and a subtle look to the whole public hub. 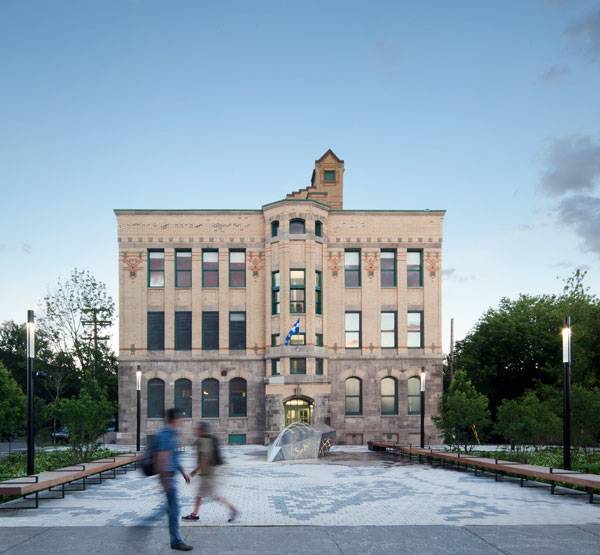 Apart from designing an enticing pattern for the paving, two large green pockets are designed in order to reflect the desires of the residents to be greener. These two pockets perform ecologically by acting as rain gardens. Densely planted with large native trees and herbaceous plants, these pockets can control the rainwater runoff from the impervious surface of the public plaza. The rainwater runoff is collected and filtered amidst the native species. The use of rich palette of native species, along with being inviting to people, will also attract native wildlife. The combination of different colors of flowering plants with the greenery is a true retreat for the users sitting on the wooden benches just beside the pockets. One can easily be lost in the beauty of nature and can spend a good time there. 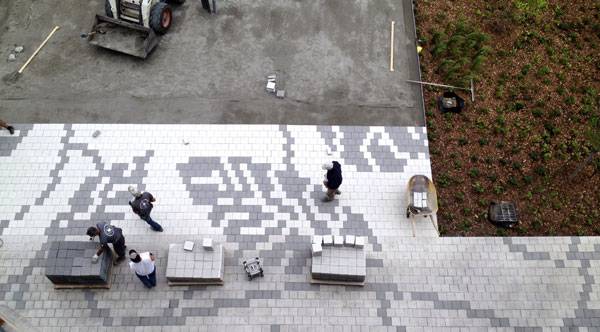 Sometimes, a single element reserves the power to transform the total outlook and change the mood of the space. In this project, the fountain is the heart of the public plaza. The centerpiece, designed by the NIPPAYSAGE team, was designed to attract people and to make the plaza more welcoming to its community. The folded-plate fountain-like sculpture symbolizes the contemporary style which is made of various assembles of large steel sheet. The perforated pattern also reflects the foliage pattern as that in the paving pattern. The silver metallic fountain is formed by a playful combination of light and water which brings a serene ambience to the plaza. 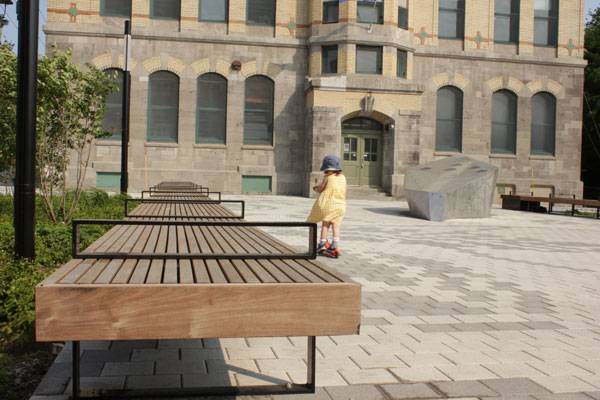 Play of Water and Light make the Plaza a Vibrant Space 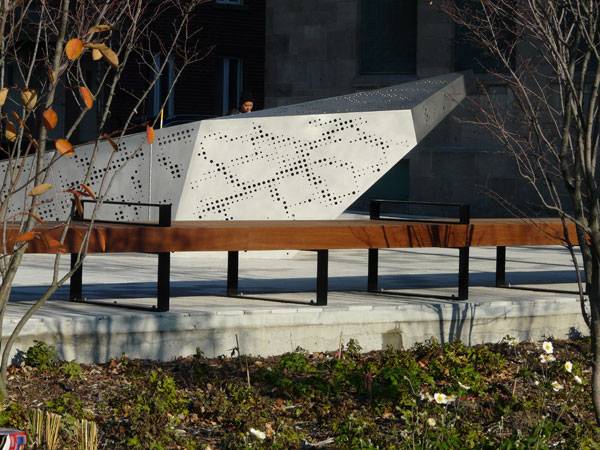 Along with the diffused light, water sprinkling out from the holes brings a distinguishing aura to the plaza. As the users maneuver around the fountain or sit in the benches, water splashes from the fountain; the radiant starry lights and the green pockets will invite you to be closer and linger by the fountain. Five jets are lying under the perforated sheet from which water sprinkles out. Other mechanized systems required to run the fountain are integrated and hidden in the two long benches. It was a challenging job for the designer to hide the water reservoir under the sculpture itself, which has been done successfully. 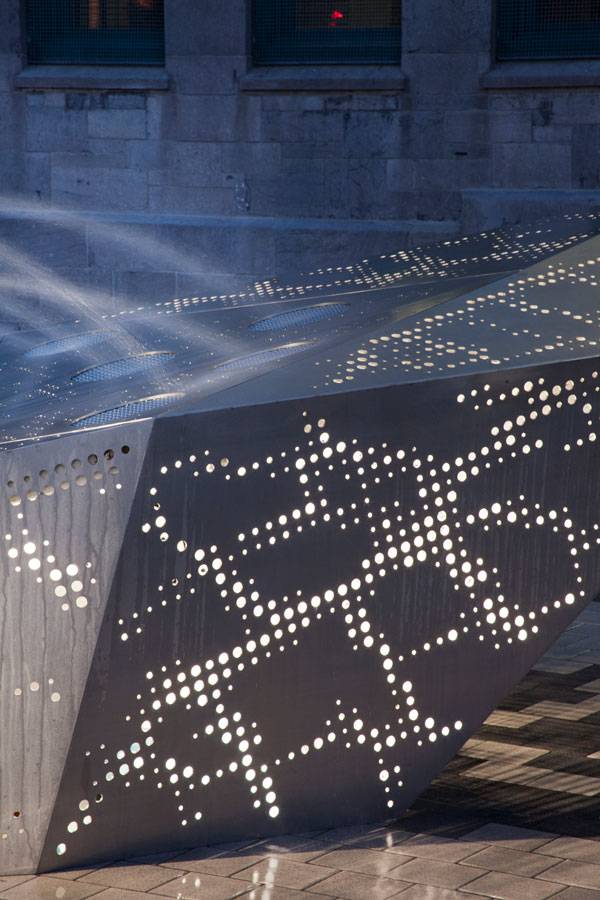 Joseph Venne Plaza gives us inspiration because it shows us how even a well-thought-out paving pattern can make the whole project different, a single object with the combination of light and water can incites various moods to a plaza and lastly, how this design approach has turned an ordinary parking lot into the apple of the eye of the residents of Ontario Street. Do you think this project has achieved its goal to revitalize its neighborhood? Leave your comments below. 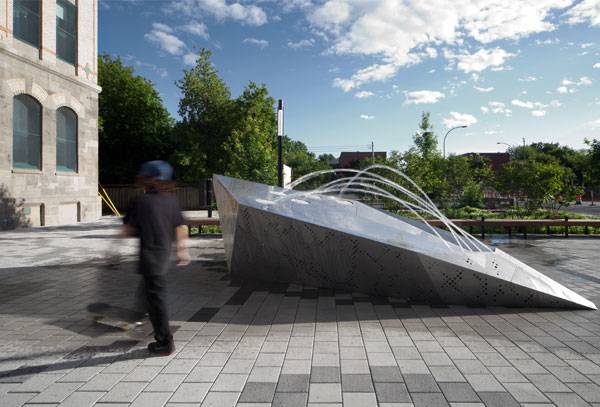