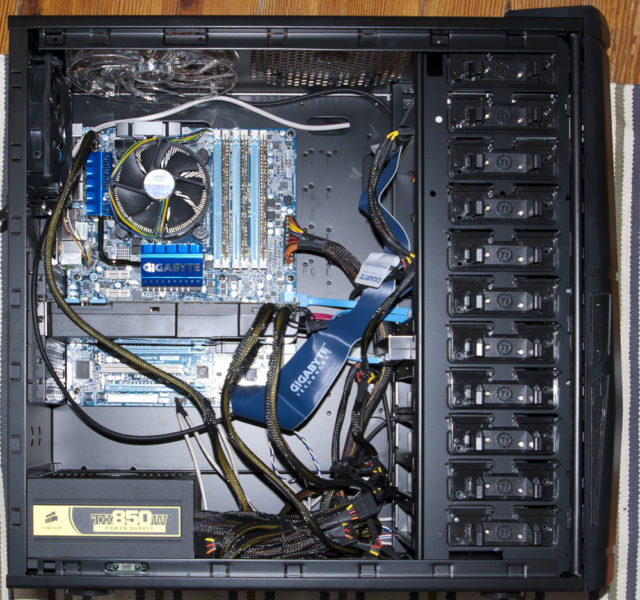 A while back, I started a series on how to build your own PC based on my experience building my own rig.  I’m going to pick that up again, but as my build is a year and a half old at this point, I’ll look at what I would build today, and what I could get off the shelf for the same price.  As I already have my gaming/graphics rig, I’ll be looking at what I would build for my wife, who is also a Landscape Designer/Planner.

This means there are a few key differences in what I’ll be getting.  For my machine, I bought one of the largest towers I could find to get the best cooling, and expansion potential, possible.  Amy doesn’t want a box that is 22″x22″x9″ sitting on her desk, so I will be looking a bit more compact.  She also doesn’t do as much 3D work as I do, so I might go a little lighter on the graphics card than I might for mine.  The first step is to set a budget.  I’ll look at a budget a bit smaller than the $1,500 I used for my build: $1,000.

Protip: Wait for sales.  I saved around $300 on my build by putting trackers on items I was looking at on NewEgg.com.  I got a package with almost the exact RAM I was looking for for free with the exact motherboard I wanted, just by waiting a couple weeks.  Which brings me to my other tip: NewEgg.com is your friend.

Right off the bat, as a windows family, $140 is gone to pay for Windows 7 Professional (64 bit) from NewEgg (Windows 8 has not been released at the time of the writing of this).  Its important if you are building a new PC at this point to get a 64-bit OS.  Among other things, it allows you to use more than roughly 3.5 Gb or RAM, which is the most a 32-bit system can see.

Now, if you just dive into shopping and try to buy a bunch of things, you’re going to get scared, and hide; unless you are a total hardware guru, at which point I am flattered that you are reading this, but it probably won’t help you a ton.  Along with NewEgg, I am also a huge fan of TomsHardware.com  They do a series called “System Builder Marathon” where they do something similar to this, at three different price levels, roughly every 6 months. They also have very good, in-depth reviews of much of the best hardware around.  The trick is, they may have done their latest builds 4-5 months ago, with budgets that bracket what you have, and that are designed to do something else.  It can be tricky to navigate a $2,400 Gaming rig and a $1000 Media server if you have $1,500 for Photoshop and CAD.  They however, are great places to start, and to make sure you don’t forget some vital piece of hardware.

There are two places you can start looking at your build: guts, and Case.  If exterior style is the most important thing, and you don’t care if it has much power, start with the case (as would be the case if you were building a Home Theater PC that just serves to play music and movies).  You could find a tiny case, or one that is small and brushed steel if that’s your style, but it may not fit components you otherwise need. I need this machine to do some decent work however, so I’m looking first at things on the inside first.

What do I need on the inside of this?

So I need at least 3 drive bays, and room for 2 PCIe slots for a large graphics card, plus it would be nice to have an extra PCI for a WiFi card.

Next time: Choosing Components I