Bridges have shaped our transportation infrastructure, have served as cultural backdrops, and date back to the “Hunters and Gatherers” Era which used natural materials such as fallen trees to act as crossing planks.  Yet, the Romans were the first to construct bridges with strength withstanding natural forces.  Aqueducts and the creation of concrete, cement, and cofferdam (a watertight cover allowing for construction of the foundation on the bed of the river) served as a critical discovery and fueled a boom in bridge construction.  This list is a collection of my favorites, which test the engineering and design boundaries, ultimately becoming landmarks of their respective locales. 10.  Akashi-Kaikyo Bridge, Awaji Island, Japan 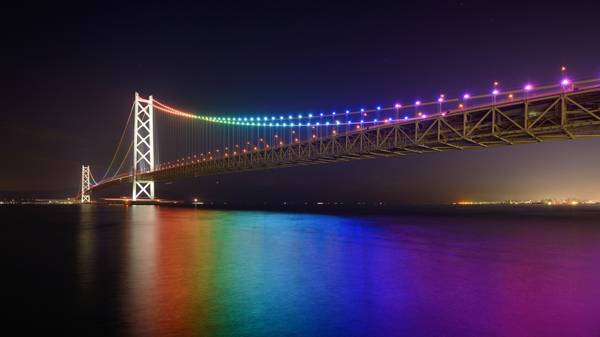 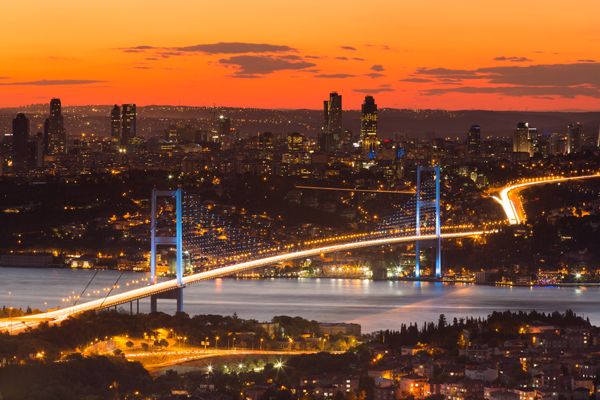 Spanning the Bosphorus Strait, this gravity-anchored suspension bridge connects Europe and Asia.  At 1,510 m (4,954 ft.) long, it is currently the 17th longest suspension bridge in the world.  Although it was opened in October 1973, the idea goes back to the Classical Era.  Greek writer Herodotus acknowledged that Mandrocles of Samos developed a pontoon bridge that linked Europe to Asia.  This allowed Darius I The Great of Persia to pursue the fleeing Scythians and relocate his forces to capture Macedon (Herodotus).  In present day, automobiles travel the bridge, and in December 1997 the one-billionth vehicle crossed.  In addition, it is a sight to savor at night as a computerized LED lighting system changes the colors and patterns creating an intriguing visual. 8. Viaduct of Millau,Aveyron,France 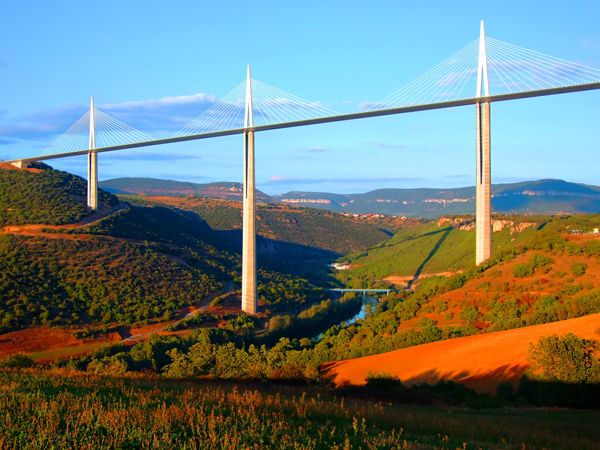 Built to remedy traffic congestion from Paris to Spain, the viaduct opened in December 2004.  It is a cable-stayed road bridge, the tallest in the world, with one mast topping out at 343 m (1,125 ft.) above the base.  Interestingly, the mast is taller than the Eiffel Tower, making it the tallest structure in France.  The Millau Viaduct has held several events ranging from pedestrian races to being featured as a setting for TV shows. 7.  Pythonbrug, Amsterdam, The Netherlands 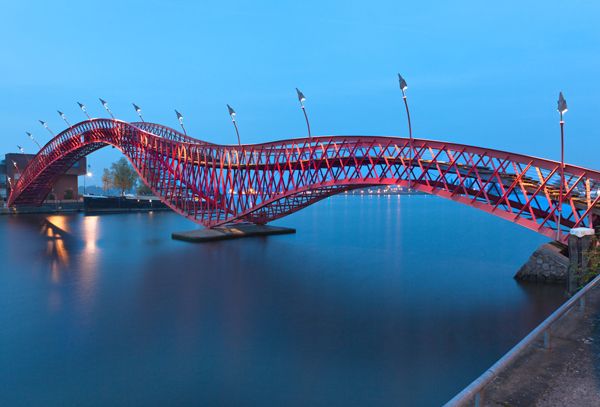 Designed by West 8 as a series of three bridges, this steel bridge titled Pythonbrug spans the 93 m (305 ft.) Railroad Basin and links Sporenburg peninsula with Borneo Island.  Its unique design allows for boats to travel under while accommodating pedestrians.  In 2002, it won the International Footbridge Award. 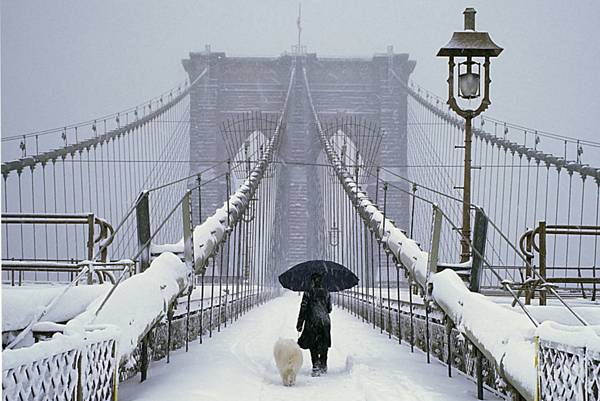 Woman walking Dog in the snow on the Brooklyn Bridge in the New York City; credit: Zhuang Mu / shutterstock.com

Completed in 1883, it is one of the oldest suspension bridges in the United States.  Originally designed by John Augustus Roebling, it was taken over by his son after John Augustus suffered an injury to his foot from a ferry pinning it against a piling.  This caused him to develop an infection, eventually resulting in his death.  The bridge is 1825 m (5,989 ft.) in length and connects Manhattan and Brooklyn crossing the East River.  Today the bridge serves pedestrians, bicycles, and automobiles. 5.  Ponte Vecchio, Florence, Italy 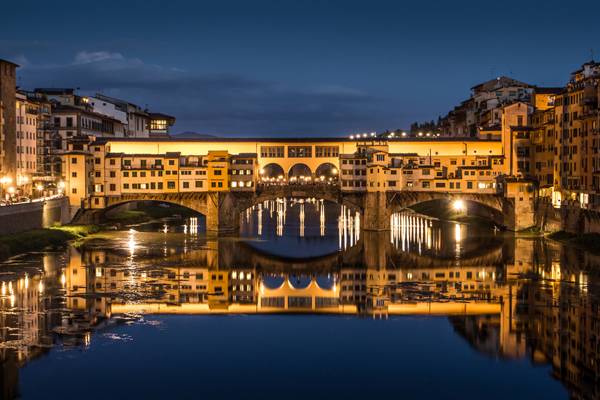 Documented first in 996, it has been rebuilt numerous times.  A severe flood wiped out the bridge in 1117, and another flood leveled it in 1333.  Reconstructed in 1345, its design can be accredited to Italian architect and painter Taddeo Gaddi.  This Medieval stone arch bridge spans the Arno River and presently occupies shops ranging from jewelers to art dealers.  The Vasari Corridor, which links Palazzo Vecchio (Florence’s town hall) with the Palazzo Pitti, was constructed in 1564 and serves as an elevated, enclosed passageway. 4.  The Helix Bridge, Marina Bay, Singapore This highly contemporary stainless steel pedestrian bridge ties Marina Centre and Marina South in the Marina Bay.  The design team, composed of Singapore-based Architects 61, Australian architecture firm Cox Group, and engineering firm Arup, collaborated to produce this exciting structure.  Consisting of canopies, which provide shade, four observation platforms, to take in panoramic views of the Singapore skyline, and LED lighting system, it is a sight to see.   The Helix Bridge opened in July 2010. 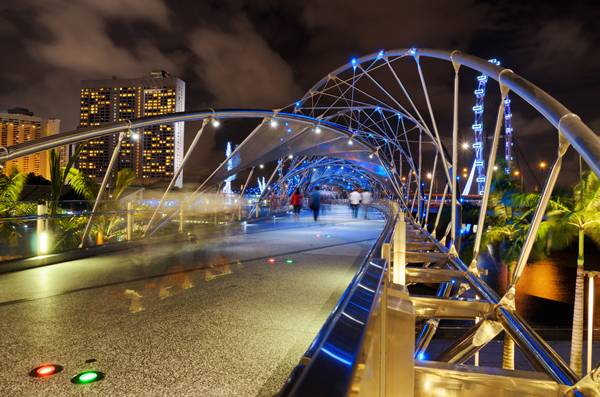 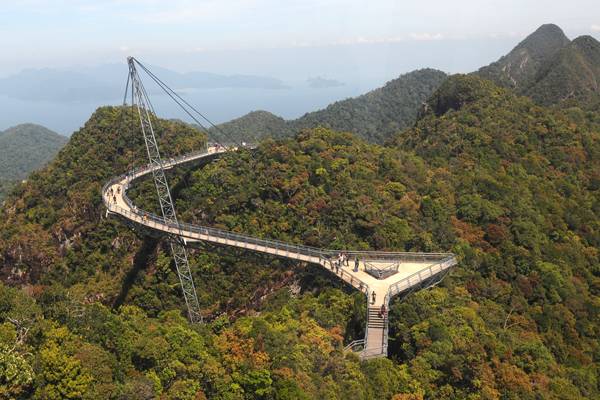 Suspended 700 m (2,300 ft.) above sea level, the Langkawi Sky Bridge is a cable pedestrian bridge supported by steel.  Bridge-goers are immersed amidst the Gunung Mat Cincang mountain range, which yields spectacular views of the Andaman Sea and the Tarutao Island.  The bridge is accessible by the Langkawi cable car, travelling a distance of 2 km (1.2 miles) up a height of 680 m (2,231 ft.).  It opened in October 2004 and has attracted a large number of adventurous thrill-seekers. 2.  The Tower Bridge, London, UK 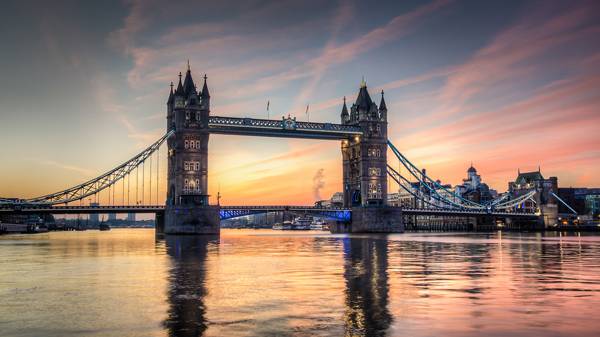 Perhaps one of the most iconic symbols of London, The Tower Bridge is a drawbridge and suspension bridge over the River Thames.  A growth in commercial development in the East End of London generated the buzz for a new bridge downstream from the London Bridge.  A bridge committee was formed led by Sir Albert Joseph Altman to address the crossing.  Since a traditional bridge would disallow tall-masted ships to port facilities in the Pool of London, this style could not be constructed.  The bridge committee opened a public design competition, and with over fifty entries, the committee eventually selected Sir Horace Jones’s design.  The bridge opened in June 1894 and despite having its share of incidents, has been the center of popular culture. 1.  The Golden Gate Bridge, San Francisco, USA 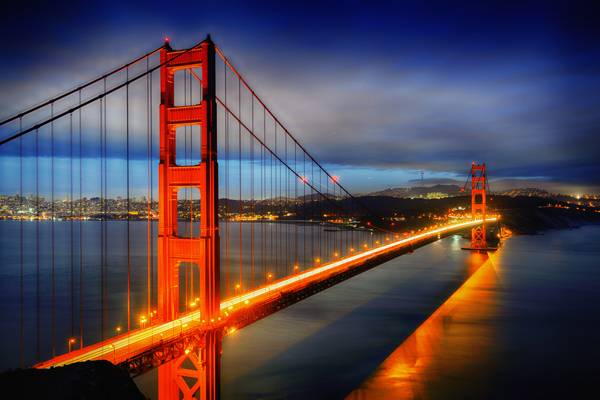 Constructed to lessen the transportation time from San Francisco to Marin County, it is a suspension bridge that spans the Golden Gate.  Joseph Strauss was hired as the chief engineer; however, he lacked knowledge in suspension bridge design.  Therefore, other experts were contracted to prepare the design, and ultimately, Leon Moisseiff (designer of the Manhattan Bridge) was selected.  Additionally, Irving Morrow, a residential architect, was commissioned to design the shape, lighting scheme, streetlights, and walkways.  Its famous internationally orange hue was initially its sealant, but locals agreed to retain its unique coloration.  The Frommer’s travel guide contends it is the most photographed bridge in the world, opening in May 1937. With today’s rapidly advancing technology and highly multi-disciplinary design teams, no bridge is too ambitious.  Get out and explore the many great bridges of the world!  I am sure I missed a few, so I would like to hear your thoughts.  What is your top 10? Recommended reading: The World’s Most Amazing Bridges (Perspectives: Landmark Top Tens: Level R Social Studies)